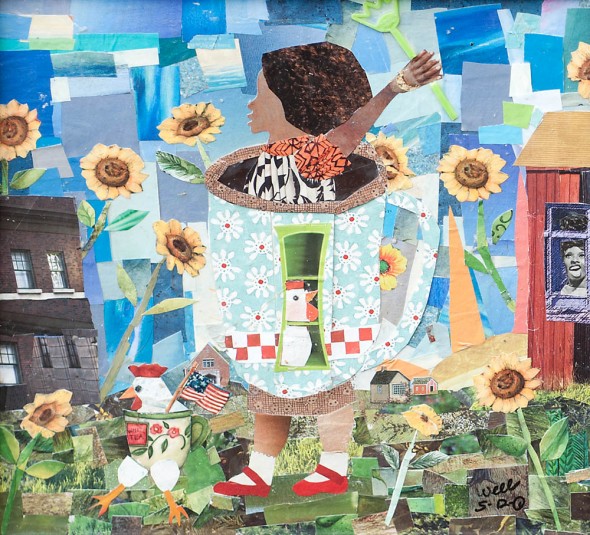 This is a story about self-taught folk artist Della Wells. I don’t know how it’s going to end. But I
know how I’m going to tell it. I’ve gathered plenty of things to put it together—photographs I’ve taken on my iPhone, a notebook with written observations from my visit to the Metro Arts Commission gallery where her work was displayed, a gallery guide written by a young intern from Belmont named Susan, a recording of an interview I did with Wells in the lobby of the Millennium Maxwell House Hotel, and my memory of personal impressions during the interview. And words. Plenty of words. If I had my way, I’d use only found words though, and try to fashion this story much like Wells’ masterful 48” x 30” found-object collage Alice Was Not Meant to Wear the American Dream, Nor Was I. And then I’d try to convince the publisher of this magazine to let me print those words on several pages of onionskin, so that layered on top of each other, you could read the story but separated you could not, and you’d understand Wells’ deep conviction that people have layers. 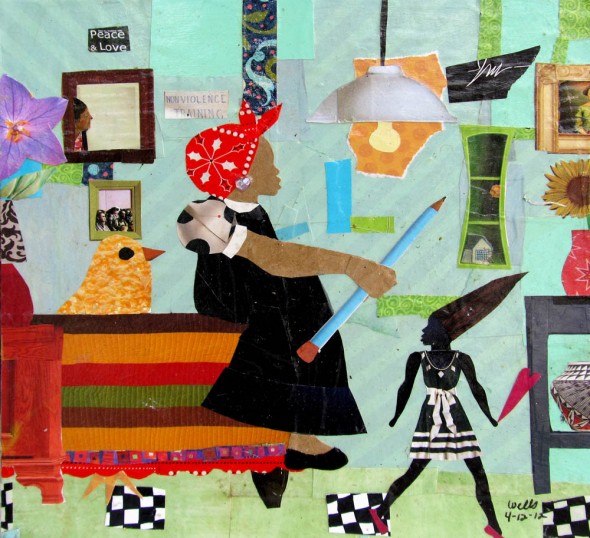 In Alice Was Not Meant… the logo for Soft & Beautiful shows up six times. I counted. You start to wonder what would happen if Wells and Jeff Koons, who she is a fan of, collaborated, and you hope he reads this. And that Wells may or may not know who Robert Rauschenberg is or even care, and why should she? She didn’t go to art school and didn’t start seriously making art in Milwaukee, where she is from, until she was 42 years old. When I tell her artists would kill to have someone spend as much time with their art as I want to with hers, she seems genuinely humbled. I want to break into the Metro Arts Commission building later that night and steal all the art for myself, but the “metro” part makes me reconsider. 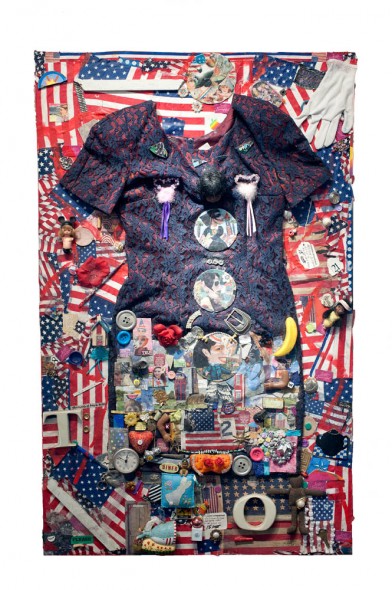 have the bare minimum of tools at my disposal to tell this story. My eyes, my fingers, words I already have (I’ve given up on the found-words idea) and an ability to string those words into sentences and then paragraphs. I’ve got a laptop too, and a Lonnie Johnson CD of recordings from 1925–32 on my stereo, which makes me tap my feet, like the dancing girls in the collage Mambo Feet. There’s that American flag again, which shows up a lot, even adorning one of the teacups in the collage A Tea Cup Moment for Two, which simultaneously feels exuberant and sad to me, and I don’t know why, like watching the kids trying to have fun in the teacup ride at the county fair.

I’m listening to my interview now where I ask Wells about the black girl in Wait from The Little Colored Series.

“The reason she doesn’t have a face is that sometimes people look at other people but they don’t really see. They don’t have to be black. They could be obese and we don’t see 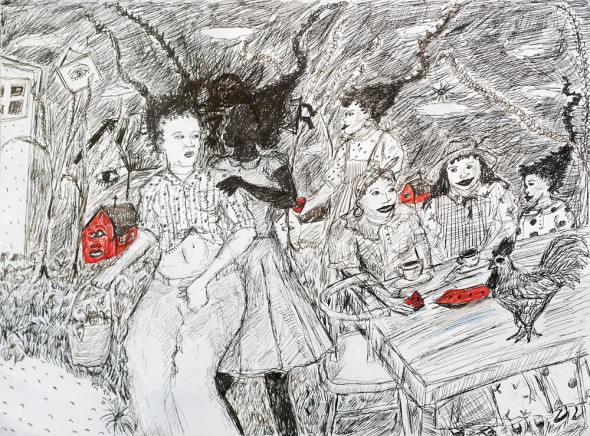 them. All we see is a blur and we assume certain things. But the power for me in being her is that she can do a lot of things because people don’t pay attention to her. They don’t think she has the power to do it. But she does.”

I ask her about starting her art career at 42.

I ask her where she gets her collage objects and what the process is like. 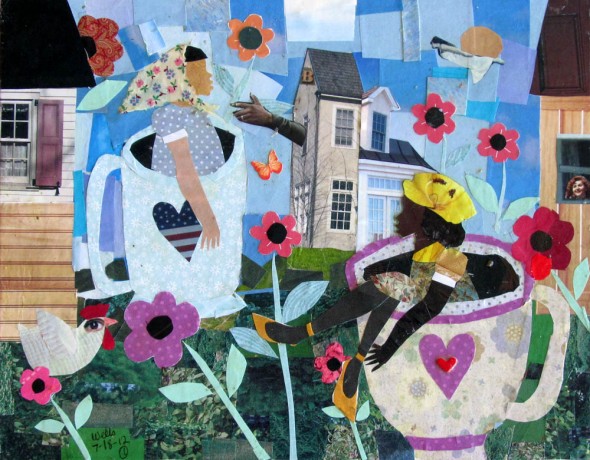 “Sometimes I buy them, sometimes I find them, sometimes people give them to me. Sometimes it’s things I have in my house and decide it’s time for me to put it in a collage. I play a game when I do collages. Once I start a new collage, I can’t look for any new objects or materials. I can get more glue, but I have to use the material that I have there, and that helps me shape the story too.” 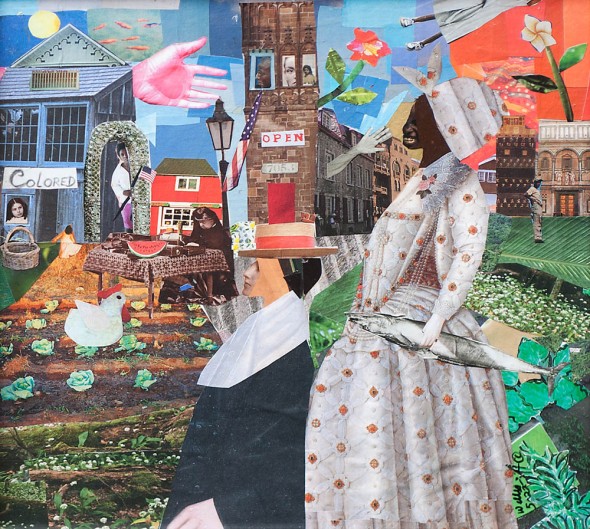 How do you know when the story’s finished?

“It tells when it’s done, and when it’s finished, it’s finished. I have a couple of pieces in my studio that I’ve been working on for three years. I’m just not sure how I want them to end. I just work on them, and I may not go back to them for awhile. [Alice Was Not Meant…] took me six months. I have one piece that took me fifteen years.” 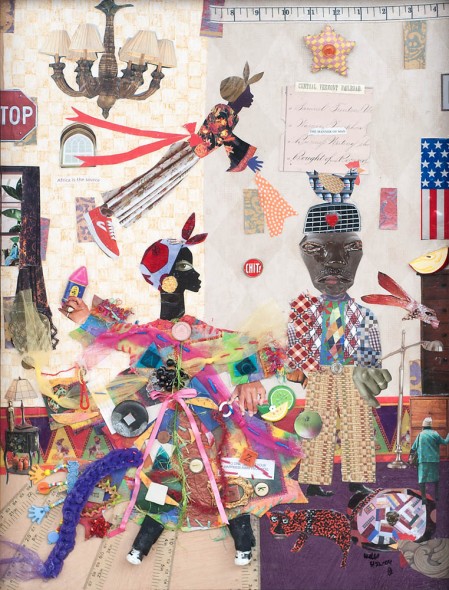 I think my story is finished. But I realize Alice Was Not Meant… kept coming up in our conversation, and I’ve written it here now four times, so much that I’ve taken to abridging it lest my editor accuse me of trying to slip extra words in. The collage is an ode to Wells’ mother, Alice, who had schizophrenia and, while gifted in math and the sciences, was not meant to wear the dress of the American dream. The artist, the “I” in the ...Nor Was I half of the painting’s title, may not be meant to wear it either. But there’s a big difference. Now I think it’s finished.

Della Wells is represented by galleries across the nation including Main Street Gallery, www.mainstreetgallery.com. We’d like to thank the Metro Nashville Arts Commission for their assistance with this article.