“We want to encourage people to talk about art and the ideas it can promote.” – Owners, 734 Jackson Boulevard

Get ready for a surprise if you drive down Harding Place near Belle Meade Boulevard past the ultra modern, Larry Woodson-designed white house on the corner of Jackson and Harding. The new mural painted on the front of it will rock your world and, depending on how you feel about an enormous Asian face amid the Southern colonial columns and half-timbered Tudors of Belle Meade, you’ll either love it or hate it. 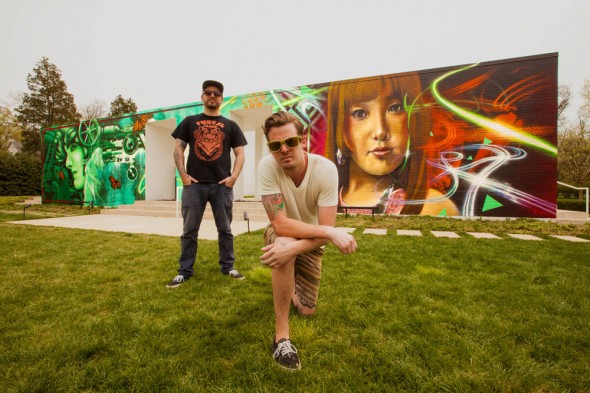 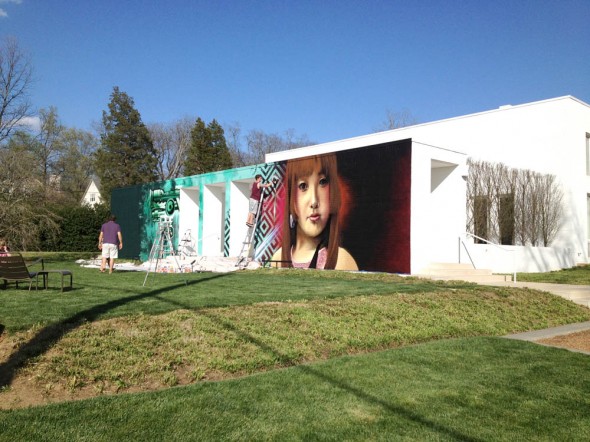 The owners collaborated with Seattle graffiti artists Joey Nix and Jeff Jacobson, commissioning them to paint their visions on the outside of the house. Internationally known videographer Chris Word documented the creation of the piece. Nix and Jacobson spray-painted the mural, called Timeline, over six days. Their intent is to represent how the past moves into the future, how one affects and builds off the other. They use symbols of Europe (a turn-of-the-century lady in profile), machines of the industrial revolution, and Asian techno-culture to represent time and its passage. Vivid, hyperrealist images convey movement and freshness. It’s a narrative with a sense of mystery, a puzzle in a picture. “These symbols are subjective,” says Nix. “We expect people to make their own interpretations.”
Timeline is the artists’ second collaboration on the house. The first, Gateway, created last year, contained esoteric geometric symbols, the face of a Native American, and flying whales and was featured in local and national media. Lately, Jacobson and Nix’s murals have gained traction internationally. Together they recently completed a large billboard in Seattle advertising Microsoft’s launch of Windows 8. Jacobson has just returned from London, after being commissioned to paint Facebook’s London HQ.
Nashville Arts sat down with the home’s owners to chat. 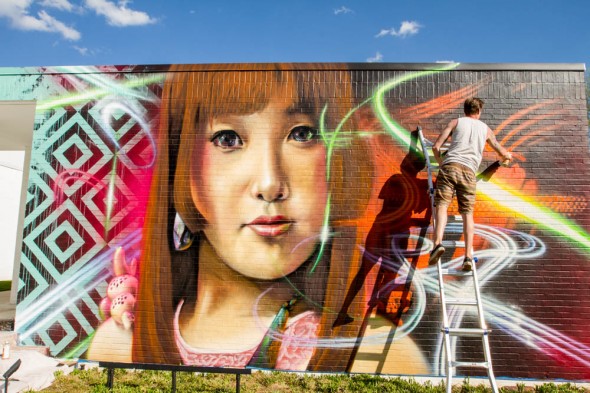 NA: Graffiti in Belle Meade? What is this world coming to?
OWNERS: We want to encourage people to talk about art and the ideas it can promote. On this go-around, we thought it helpful to start a Facebook page (outside734) so that people could engage in a conversation about the art.
NA: I’m engaged. Why tag your house?
OWNERS: One of the reasons that graffiti art resonates with us is because often the message is outside the established community. Champions of this medium include artists like Banksy in England and Shepard Fairey here in the U.S. He’s the artist who became famous for his Obama campaign poster. Until recently, artists like them were excluded from the community, traditional art galleries, and showrooms. Socially they have been deemed unpalatable and uncontrollable for fear that their philosophies may be anti-establishment.
NA: What do you get out of it? Is there an underlying agenda?
OWNERS: We’re doing it for fun. We’re not opening a gallery or starting a business. We truly love all art forms, from the classic to ultra-contemporary. Even if we don’t get it, we try to respect the artists’ right to their voices.
NA: What are people’s reactions?
OWNERS: We get so many comments. People drive by the house. They put notes in our mailbox. The overwhelming response has been positive and encouraging. People seem to appreciate the effort.
NA: And the neighbors?
OWNERS: They have been extremely supportive. We love this neighborhood.
NA: On Facebook someone said they “didn’t want to be held hostage by someone else’s taste.”
OWNERS: It certainly speaks to the power of art that an image could hold you hostage [laughs]. Ironically, Banksy’s early message was that he felt he was being held hostage by the advertising of multinational corporations, on billboards and in other advertising media. He calls it “brandalism.”
NA: Why do you think the medium is so challenging for some? Is it because of this anti-establishment idea, the idea that the art is made by outsiders?
OWNERS: Yes, partially. Many of us don’t even know we’re uncomfortable. It’s not traditional. It’s a different kind of art. You don’t go somewhere and see it on purpose. Also, this is Belle Meade. People don’t expect to see it here. But whatever anyone says about the form or the art, Nix and Jacobson are the best at what they do. This level of hyperrealist imaging with spray paint is world class.
NA: How did this start? How did you meet the artists? Can you describe the process?
OWNERS: We met them in Seattle where they were painting a mural. We loved their work and hit it off. After we showed them a picture of the house, we started talking about what we could do together.
NA: How long will you keep it?
OWNERS: No idea.
For more about the artists, visit Jeff Jacobson’s blog at
wierdocult and Joey Nix’s blog at joeynix.
Join the conversation at outside734.