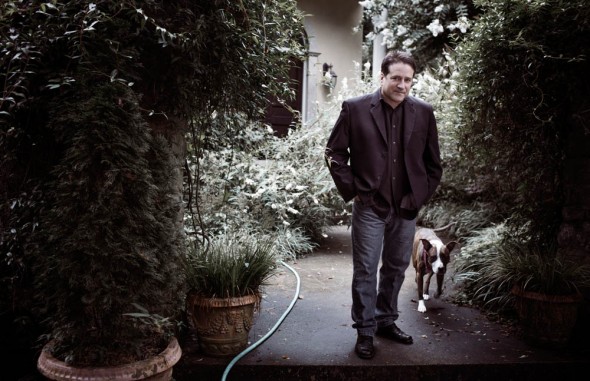 Mel Ziegler may be one of the most important artists working in the United States today, yet he doesn’t mind operating under the radar of the mainstream art world. He is part historian, conceptual artist, sociologist, and aspiring farmer—creating work that occupies a unique place in the art world, bridging political, historical, and social concerns—mining the buried histories and narratives of the American landscape.

From 1978 to 1995 Ziegler collaborated with his partner, Kate Ericson, to create a rich and highly influential body of work that moved the insular conceptualism of the ’70s out into the real world with projects that engaged ordinary citizens. Their work took highbrow, theoretical art practice to the streets—sometimes quite literally, as in the case of a project from 1989 called Loaded Text in Durham, North Carolina, where Ziegler and Ericson used magic markers to hand write the sixty-five-page Downtown Durham Revitalization Plan on a section of broken sidewalk. The artists then demolished the sidewalk, displayed the rubble in front of the Durham Arts Council, then had a contractor install a new sidewalk and used the rubble to stabilize a local stream bank.

The project is one of Ziegler’s favorites: “Every part of it, everything came back around to itself, everything had its place,” he says. “This project was what Kate and I had been trying to do most of our career—infiltrate these systems . . . of the urban or suburban fabric and make art out of what’s already there.”

Ericson and Ziegler’s collaboration ended tragically in 1995 with Ericson’s untimely death from cancer. After her death Ziegler had to reinvent himself: “My world as an artist became unstable. No one knew who I was as an individual artist. A few years after her death I found myself living in Austin, Texas. It wasn’t New York . . . and at first I struggled with being in what I considered to be a small town with a limited visual-art world. Because my work responds to local communities and regions, I became fascinated with the local mythology and the Texas landscape . . . death and heroism seemed to be critical to the Texas lore . . . so I began to respond and make work about it.”

Ziegler’s recent work expands on his interest in enormity of the Midwestern landscape through “lighting events” that he stages throughout the heartland and documents in photographs. The striking photographs have a surreal, cinematic feel that brings to mind a scene from a sci-fi movie. “I do not do this for the sake of making a photograph,” he says. “I consider these to be documentations of lighting events. It’s OK to think of them as otherworldly. This quality is what gives its uniqueness to the landscape and makes it operate in the realm of something out of the ordinary. By doing so I hope we take a deeper and more profound look at our agricultural landscape and food production.” 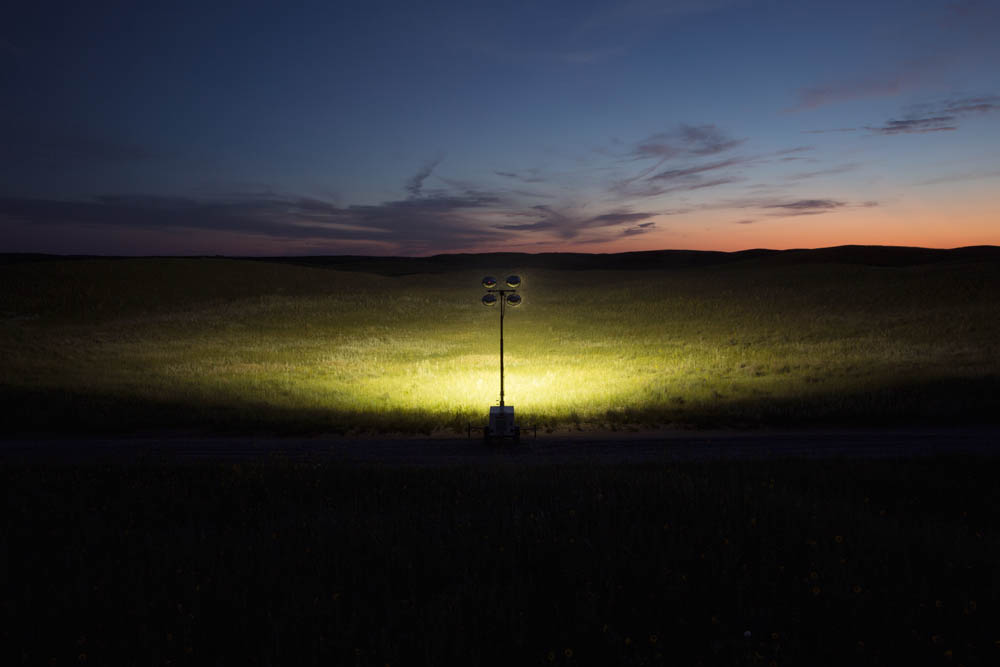 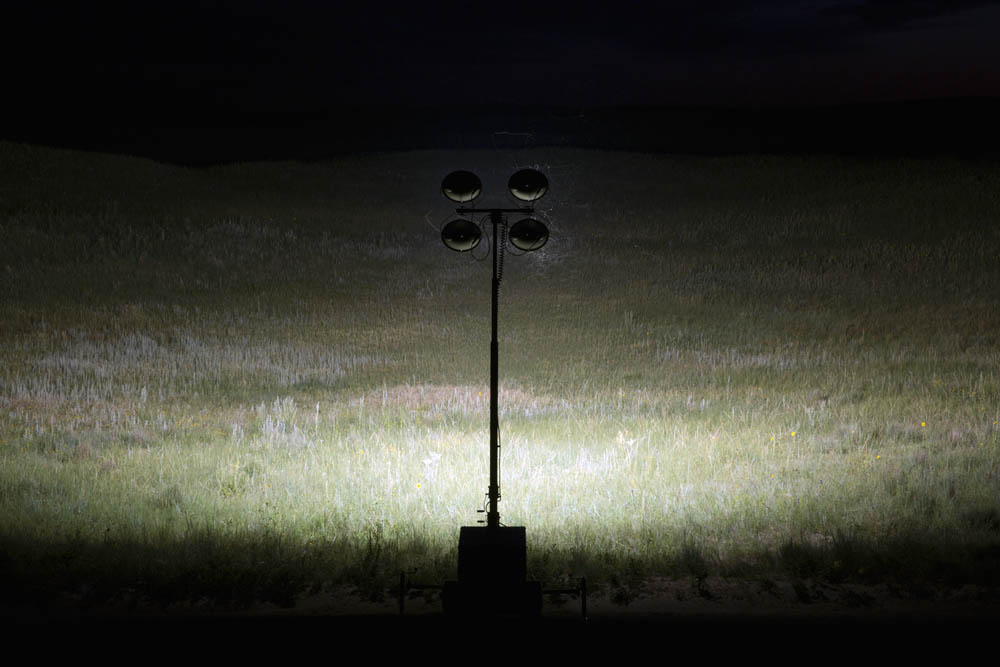 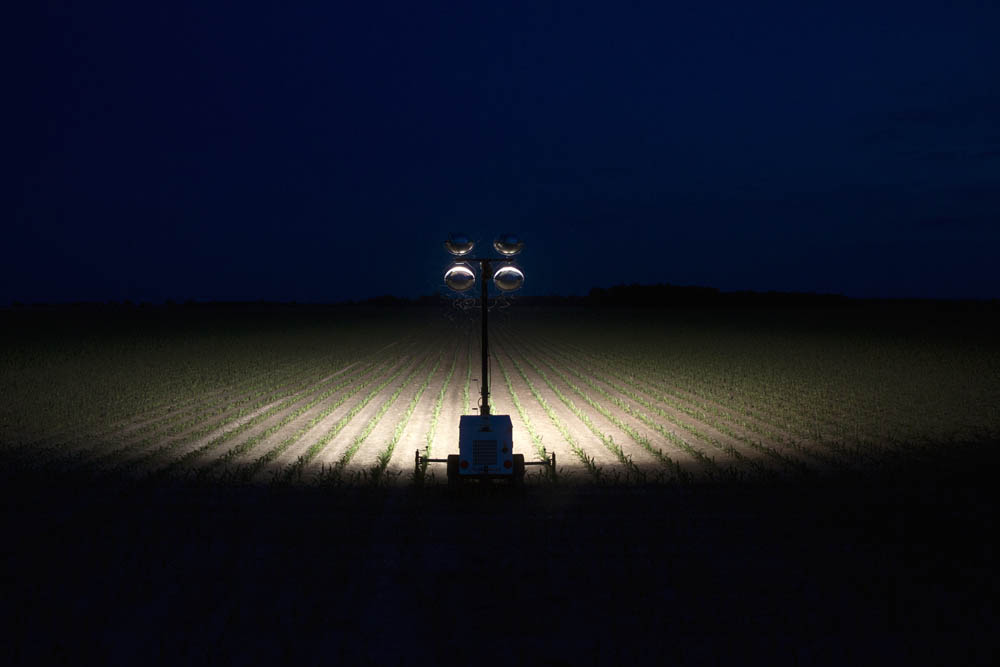 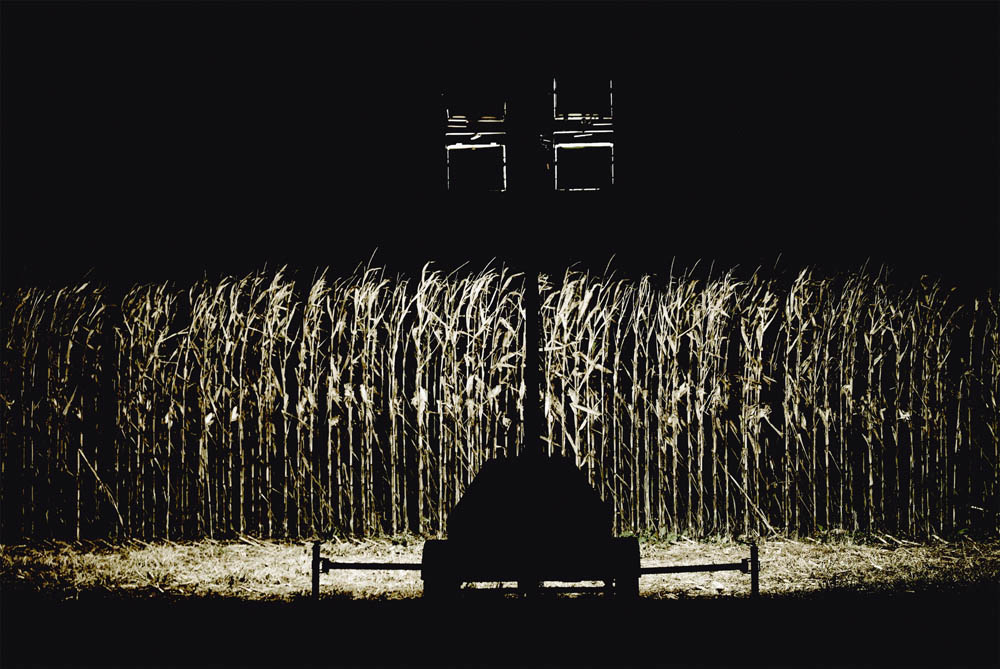 “Rarely do we monumentalize the everyday,” says Ziegler. “That is what I do here. I am temporarily and falsely monumentalizing the commonality and the ubiquitousness of the fields. I am asking for them . . . to reenter our consciousness and not just be taken for granted.”

Completed in 2013, the project had its genesis two years ago when Ziegler began traveling through the region during a period of record drought, meeting with farmers. For him, a one-on-one dialogue with the farmers is a key element. “It’s about having conversations,” he says. “I am entering their world briefly and asking to do something absurd, so gaining trust is critical. I have met some amazing and interesting farmers. The conversations begin to define the work for me, and there are some great stories that go with each image.

“I find that if I return to an area time after time, I begin to broaden my involvement with a particular community—like the Sandhills region in Nebraska. I have been going there for the last two years, and because the towns are small they begin to notice an outsider returning over time. My studio becomes the local bar or diner. It’s a place of engagement. I have met lots of people that way and find possibilities through that interaction.”

Ziegler’s interest in farming and food production was born during his childhood on a farm in rural Pennsylvania. “I can remember as a child hand-hoeing the corn fields when my dad went organic. It remains some of the hardest work I have ever experienced.” Today Ziegler maintains a farm of his own and refers to himself as a part-time farmer. “Farming is full of dichotomies and contradictions,” he says. “We think of it as peaceful and serene, but it is also extremely violent. We kill animals, have equipment that violently cuts, crimps, tears, rips, and tills. What is serene about that? Farming has constant “ups and downs [with] no getting ahead [and] no end in sight. Few people realize that unless they have lived it.” 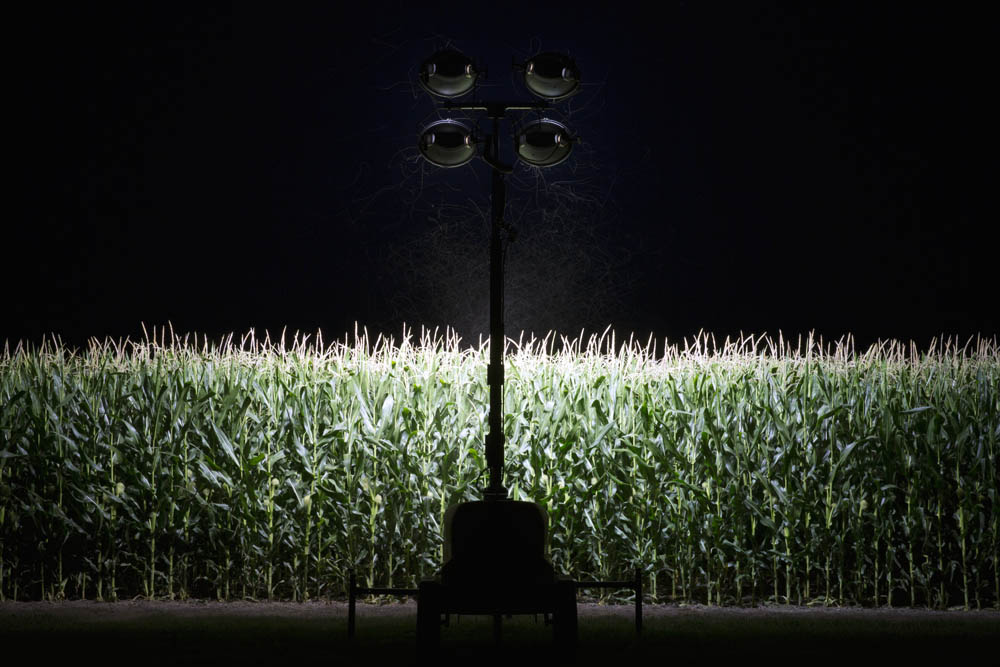 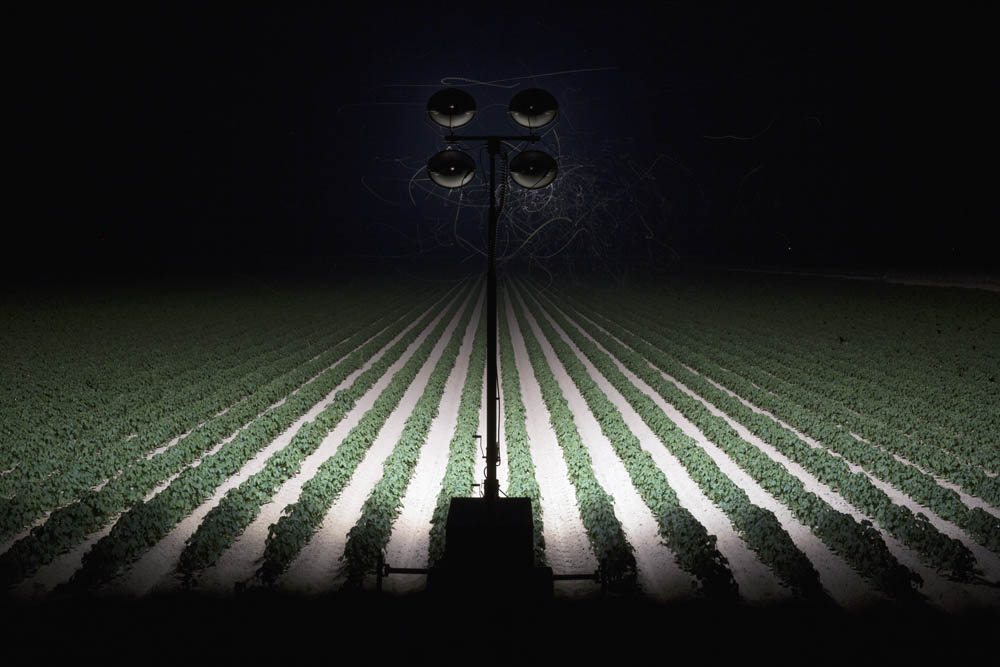 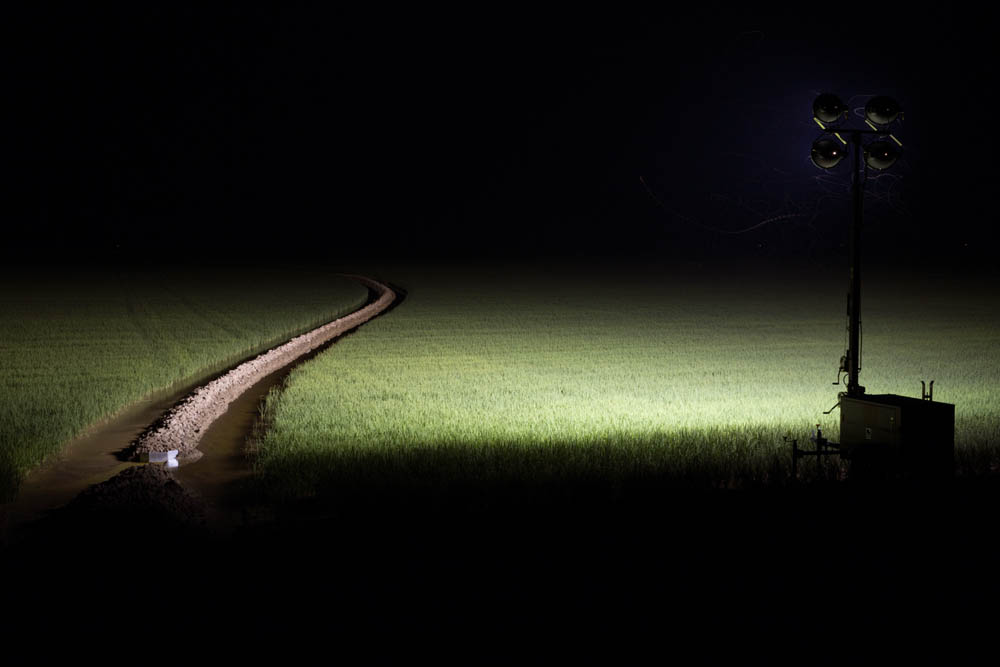 Agriculture’s role in shaping the landscape and the American way of life is also of interest to Ziegler, who has been influenced by the writings of landscape philosopher J.B. Jackson, who believed that the complexion of landscape is constructed by the presence of man. Ziegler’s project echoes this idea—finding meaning in heavily manipulated landscapes. “Driving around the Midwest to do my lighting events has been so informative. It is overwhelming to see cornfield after cornfield or miles and miles of soybeans or rice. It is simply mind-blowing. Drive it and experience it, and you will then realize how complicated food production and agriculture are.”

Ziegler is anxious to further explore the area, its residents, and their relationship to eco-system. “I love the layers of possibilities that arise from the agricultural uses in the region. I know of nothing like it in terms of landscape and ecology. And the people are extremely friendly and open. That makes it easy to begin these conversations.”

Ziegler’s work as an educator and chair of Vanderbilt’s Fine Arts Department helps inform his work as an artist. “It keeps me thinking and constantly challenges me to stay informed with the art world and its expanding conversations.” These sentiments extend to the totality of his life. As he puts it,

“Whether I am teaching, being a father, a husband, a farmer and baling hay on my small farm, it’s part of being an artist. It all informs me and my work.”

Mel Ziegler will be exhibiting his agricultural images and other works at the Bemis Center for Contemporary Art, Omaha, Nebraska, from September 19, 2013, to March 1, 2014. He is also currently woking on a project for Austin Peay State University, Department of Art, Trahern Gallery. Ziegler will capture a thousand laughs from around the Clarksville community in jars. For more information on his work visit his website at www.melziegler.com, and you might also purchase America Starts Here, cataloguing the work with his late partner, Kate Ericson (MIT Press) from our local Parnassus Books. 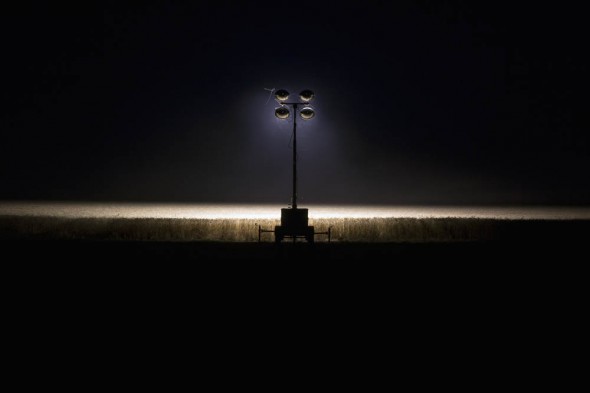 All lighting events were in cooperation and in conversation with farmers from various small communities across the Midwest.