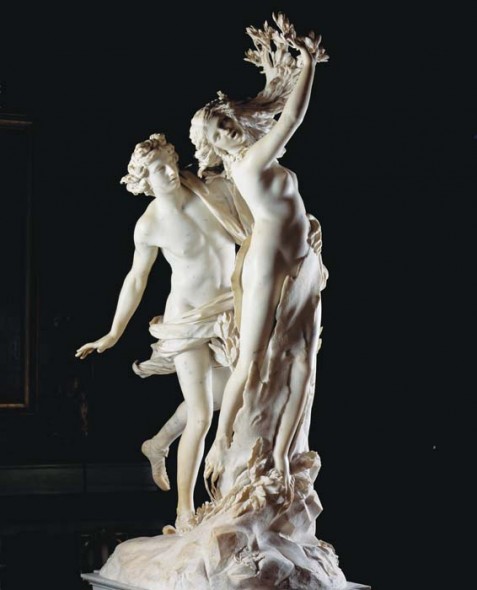 There are few moments more memorable in the life of an art historian than walking into the Galleria Borghese and seeing Bernini’s Apollo and Daphne, 1622-25, for the first time. It is a sculpture of astonishing beauty and virtuosity. Cardinal Scipione Borghese commissioned the Italian Baroque artist Gian Lorenzo Bernini to carve three sculptures: Pluto and Persephone, Apollo and Daphne, and David. All three sculptures demonstrate the artist’s mastery, but in Apollo and Daphne the artist pushes the extremity of the material. Bernini’s ability to manipulate a stone as hard as marble as if it were as soft as dough has confounded and delighted scholars and visitors for centuries.

The god Apollo is the victim of his own arrogance. He insulted Cupid who retaliated by shooting an arrow through Apollo’s heart to incite love. Cupid also shot Daphne with a different arrow, which would produce repulsion. As Apollo advances, Daphne beseeches her father, Peneus, to help her escape the amorous suitor. At the instant that Apollo reaches out to embrace the elusive Daphne, Peneus transforms his beloved daughter into a laurel tree. Her fingers become branches, her toes roots, and her hair leaves. Although the object of his desire has slipped through his hands, the heartbroken Apollo devotes the remainder of his life to caring for the tree. According to Ovid, Apollo asks for the laurel to be evergreen and for laurel wreaths to be worn henceforth in triumph and ovation.

John Pope-Hennessy tells us that Bernini was immersed in several restoration projects at the time he was working on Apollo and Daphne. He admired the sculptures of Ancient Rome and Greece, especially Hellenistic Greece. His version of Apollo was based on the classical statue the Apollo Belvedere. In Bernini’s interpretation the frontal pose of the prototype was exchanged for a side view. The sculptor’s intention was for Apollo and Daphne to be shown against a wall at eye level where a single view would provide the most intense emotional impact, the peak of Daphne’s horror and Apollo’s resignation of unrequited love. Nevertheless, the sculpture is fully finished on all sides allowing light to define form with almost spiritual intensity.

Bernini’s sculpture is a metaphor for how sculpture transforms one material into its opposite. Marble becomes flesh and bone. Daphne, in turn, is converted into wood, another material often used in sculpture. Deep cutting in the drapery, flowing hair, and emerging tree convey the immediacy of action, while the delicacy and thinness of the marble leaves make them appear almost transparent. Bernini was an architect, sculptor, painter, and writer whose impact virtually defines the Baroque in Rome. The three sculptures he created for Cardinal Borghese are still on view in the former Villa Borghese (now the Galleria). The myth of Apollo and Daphne has never been conveyed more emphatically than by Bernini, who takes the medium to the limits of transformation and the narrative to dramatic denouement.