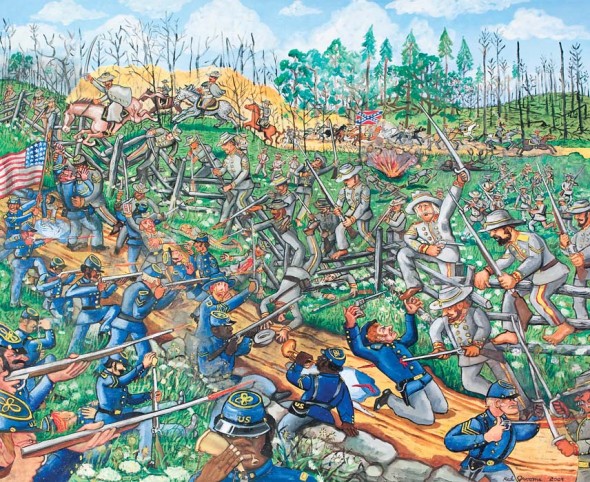 Red grew up in a South where “the past isn’t dead. It isn’t even past.”

Maybe it was William Faulkner who best explained Red Grooms’s passion for the American Civil War when he wrote: “It’s all now you see. Yesterday won’t be over until tomorrow and tomorrow began ten thousand years ago. For every Southern boy fourteen years old, not once but whenever he wants it, there is the instant when it’s still not yet two o’clock on that July afternoon in 1863 . . . it hasn’t happened yet, it hasn’t even begun yet, it not only hasn’t begun yet but there is still time for it not to begin against that position and those circumstances . . . yet it’s going to begin, we all know that, we have come too far with too much at stake and that moment doesn’t need even a fourteen-year-old boy to think This time. Maybe this time with all this much to lose and all this much to gain . . . ” writing of Pickett’s Charge at the Battle of Gettysburg in Intruder in the Dust in 1948. 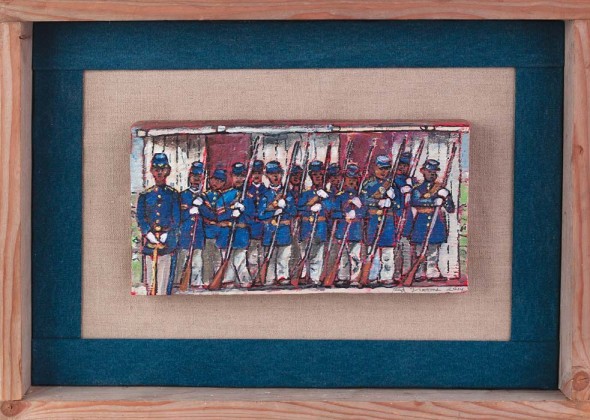 Of course, Faulkner could not have been speaking of Red, in particular, for Red was eleven years old that year, not fourteen. Yet, he has somehow captured the passion that Red had for the Civil War, as a boy. A passion that Faulkner explained was, at least in those days, almost universal among young, white boys in the South. With passion and imagination in tow, Red Grooms and his peers were somehow transported by history to the battlefields of the past. You see it being told in a painting he did at twelve called Civil War as the Lincoln of the Lincoln Memorial sits amid the scenes of the chaos of war.

For most of those fourteen year olds that Faulkner spoke of, the American Civil War would eventually be put away along with a kickball and sleds, scout uniforms and bicycles. Passions would fade in time, and with each passing year it would be harder to conjure up how it had felt to charge at Gettysburg or see Albert Sidney Johnston hit at Shiloh. 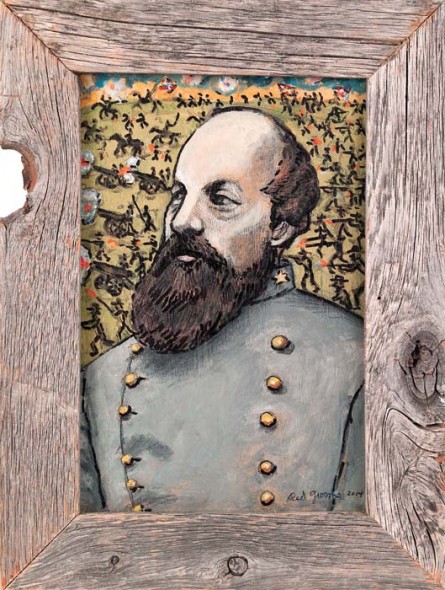 Fortunately for us, Red Grooms never completely left his passion for the Civil War on a playing field or in a closet filled with the past. Like the boys Faulkner spoke so elegantly of, Red grew up in a South where “the past isn’t dead. It isn’t even past.”

Painting Civil War scenes as a boy, Red was able to keep that link to history alive. Yet, in time, he did move on north, to New York, where he continued to study art and eventually built a world-class career.

His work has always been filled with ‘life’—whether depicting the myriad personalities who have captured his interest or some chaotic tableau of urban existence. In his near fifty years as an artist, Red has never lost that sense of the ironic that comes with youth and, in his case, the heady days of post-war America. Humor about life, itself, has never faded from his work. For even now, so many years later, there remains a clear ‘youthfulness’ to his creations.

Each character has been carefully placed into the scene. Every bit of the chaos has been planned. 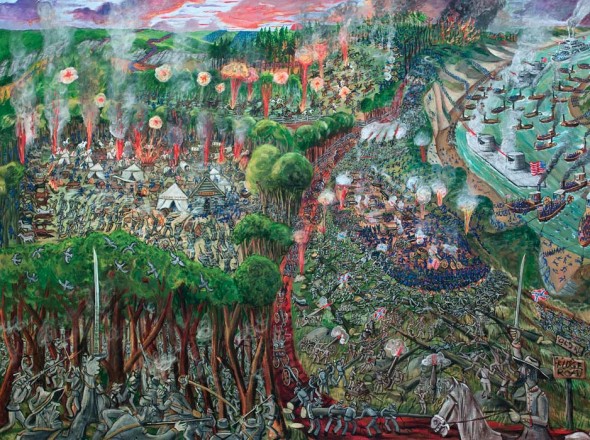 It is appropriate that Red has now returned to a past he never really left as he passionately depicts the scenes and personalities of the American Civil War in this body of paintings and constructions. Like his great contemporary urban scenes, much of his Civil War work seems frantic in its creation. Yet, in truth, like all the rest of Red’s work over the years, there is a real sense of the deliberation of a trained, seasoned artist at work to these scenes and portraits, both in his choice of whom they depict and in their very creation. 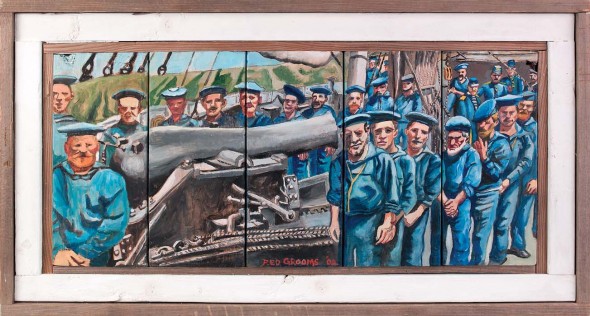 Red says the Civil War series, which is about a portion of an even larger body of work he is creating, was not born out of a visit to a battlefield, but out of a visit to a shop on Bloom Street in New York around 1998. While making his way through the shop, Red came upon some old frames. As he and his wife, Lysiane, were in the process of building a home and studio up on the Cumberland Plateau at the time, his new work in these old frames seemed somehow rooted to his past, to Tennessee. Painting Civil War scenes to fill these old frames began to have what he describes as a “Tennessee-like mythical” quality. As the studio was being built, Red found himself picking up scraps of wood to use in the construction of the work and eventually building many of the frames himself.

His fascination with old photographs, going back to childhood, would prove to be the source of so many of the portraits within the show. As the Civil War was one of the very first wars to be documented by photography, Red had hundreds of images to choose from. My choice among his portraits might be his U.S. Grant image on a slice of a log. There is weariness to Grant’s demeanor, and truth is, there are many photographs of Grant simply looking tired and worn by war. 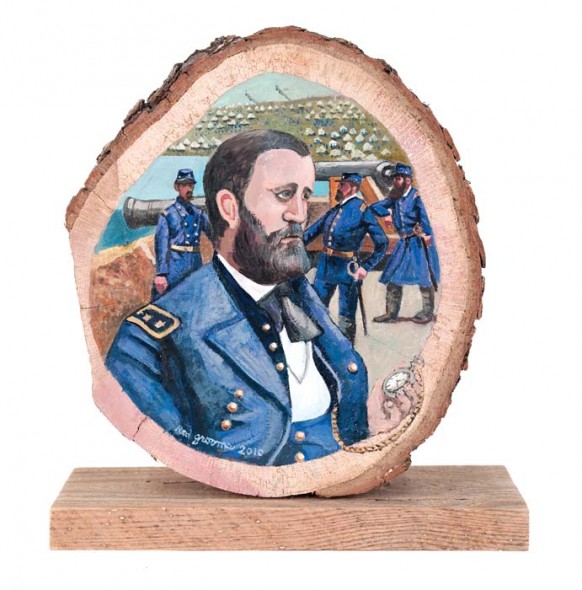 Filling in the missing gaps for Red were firsthand accounts of the war, like Sam Watson’s Co. Aytch, a book that Margaret Mitchell once described as the “most affectionate personal memoir to come out of the war.” In using these eyewitness accounts, Red has constructed epic battle scenes at the heart of the show.

My favorite is his Battle of Shiloh. Standing before it, we’re reminded of those great battle frescos found in Renaissance palazzos. And like those Italian frescos, you soon realize that each character has been carefully placed into the scene. Every bit of the chaos has been planned. 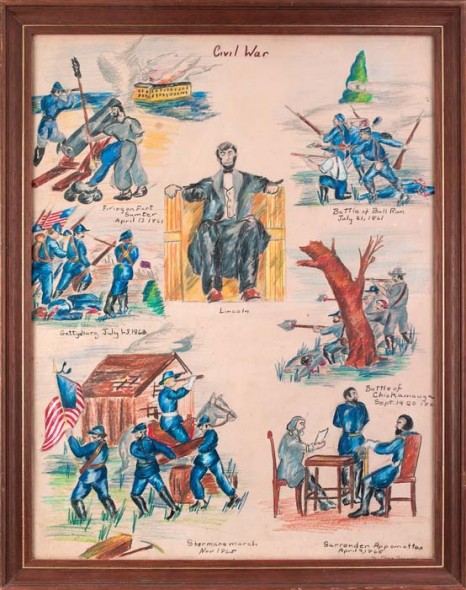 In the end, maybe that is what Red Grooms has always done best, whether portraying New York at rush hour or a battlefield in Tennessee; it’s about planning out the chaos of our lives and our history, for “It’s all now you see. Yesterday won’t be over until tomorrow. . . . ”

Red Grooms: The Blue and the Grey will be on exhibit 10 a.m. to 5 p.m. at the Tennessee State Museum December 13 through June 7, 2015. For more information please visit www.tnmuseum.org. 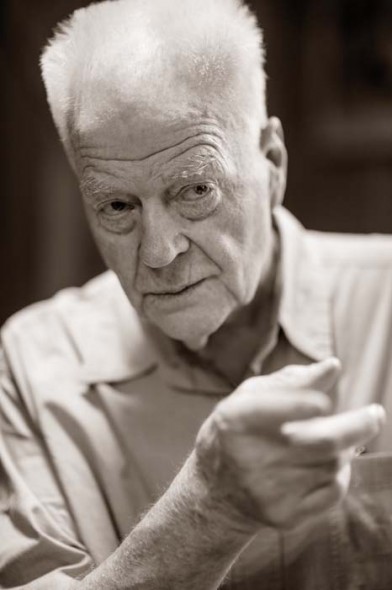