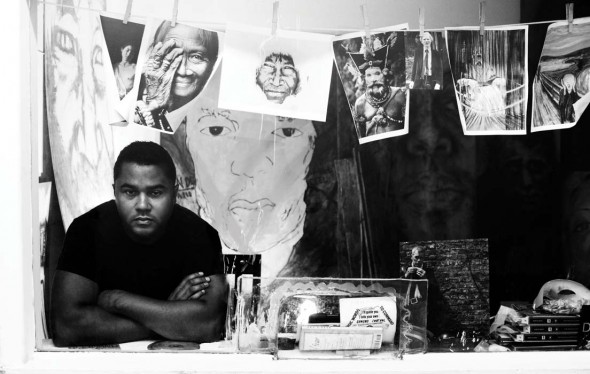 Staring Out & Staring In

A couple of years ago I shared a studio with a few other artists in the Chestnut Square Building. Entering through the front entrance I was always met with the sight of large portraits done in charcoal, which sat outside the studio of Stephen Watkins. Inside, his space was always full of these large figures, and rarely did I ever see any that were less than four feet tall. We would often walk into one another’s studio and talk about what we were currently working on or a piece recently completed. On the occasion of this interview, we sat on my back porch and talked of Basquiat, consistency, and trusting your own artistic impulse. 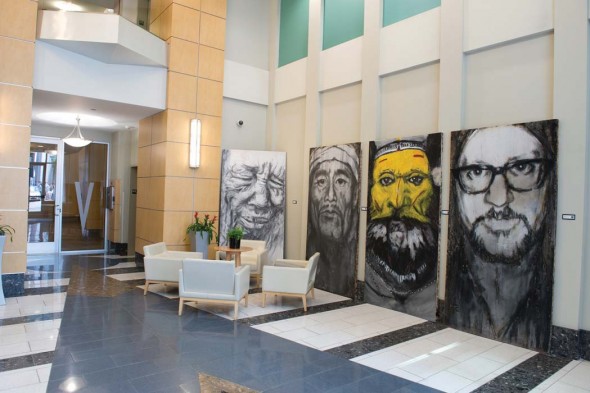 Mother’s Sorrow, Sinnerman…Freedom Found?, Wigman, and Lil’ Jack at Outside the Studio at the Viridian. Photograph by Graham Gerdeman

“I go to the studio earlier in the day,” begins the artist. “I’ll put on music, maybe start to dance. I don’t mind sipping on bourbon, and I try to get into that zone. Well, maybe the bourbon comes first, and then the dancing. Sometimes I’ll play a documentary as well. I don’t really like talking about the creative process, ’cause you know, in some ways that’s your moment, and you don’t . . . maybe some of the stuff that you do is something most people don’t get. But I try to tap into every sense. I’ll walk into the studio, start burning incense, put on Miles Davis. “Blue in Green” is a song I often start with, and there’s just something about that opening. But yeah, I’ll put some ice in a cup, pour a little bourbon over it, and you can hear the ice crackling, and overall that’s kind of how I begin.” 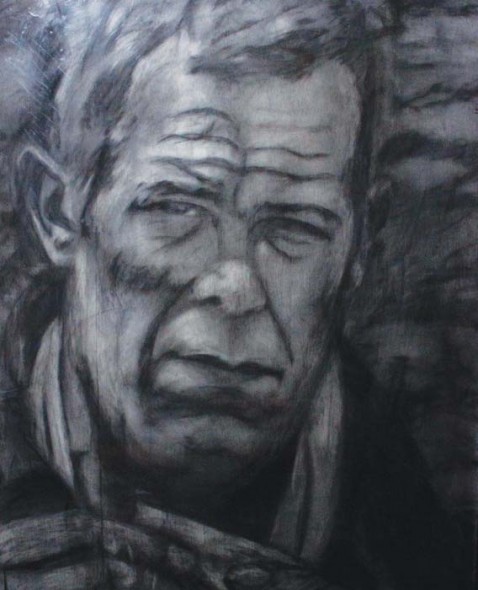 We next talked about intuition and failure, and the passion, if not the reasons, behind the creative impulse. “When you’re working you have to be conscious of your work; you don’t want it to make a turn you don’t want it to make. You need to be observant, and sometimes know when to not touch something. I guess that’s partly intuition and also experience. But you also have to trust yourself enough to take chances. So I feel like if there’s anything you might be afraid to do wrong, you should do that and head in that direction. As for what’s behind the work, I think if a piece is honest or true or whatever, then it will have substance and energy. It’s like when I look at something by Basquiat, I just think of how productive he was, how much energy was behind his work. It makes me want to be even more productive.”

Lastly we talked about the current direction of the artist’s work. “Lately I’ve been using color, trying to break away from what I’ve been doing. People say charcoal is bold, but to me, right now, it’s just safe. I’m not saying I’ve peaked, but I don’t want to plateau, you know? I’ve recently been working with pastel and oils, in addition to charcoal, so it will be interesting to see where it leads me.”

You can see the artist’s work at the 100 Taylor Street Arts Collective, where there will be open studio nights on the first Tuesday of every month. For more about Watkins, visit www.stephenwatkinsart.com and www.rockettonerecords.com. 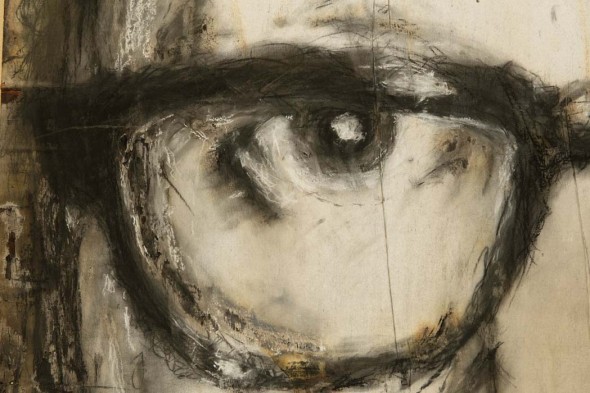