Self-taught sculptor Daniel Lai radiates the type of strength, intelligence, and vigorous curiosity you would expect to encounter in individuals whose days are shaped by a keen imagination and a boundless sense of humor. Like many of us who once felt a bit awkward, Daniel was a shy child who wasn’t yet comfortable in his skin. Inherently bright and bored in school, he passed the time by folding pages in his textbooks, for which his teacher scolded him. That stern educator would surely marvel to see where “playing with his books” has taken this talented artist. 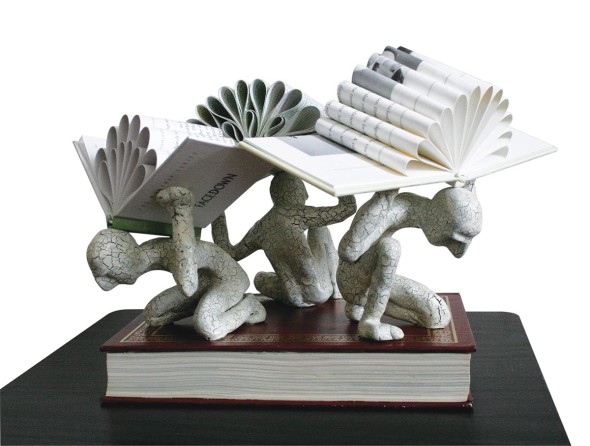 “I had always loved the Renaissance, but I had only seen works in books and on the Internet. Seeing the originals blew me away—I stood in front of masterpieces by El Greco, Caravaggio, Titian, and Botticelli for hours—the Met was my temple.”

Of Chinese lineage, Daniel was born and raised in Kuala Lumpur, Malaysia, but, he explained, “At a very young age, I don’t even remember when, I knew Malaysia was not for me.”

Daniel began to study English even before he entered high school. The first book he ever read in English—his fourth language after Cantonese, Hakka, and Mandarin—was Jules Verne’s Around the World in Eighty Days.

“I probably understood less than fifty per cent of it. Reading was tedious. I had a dictionary along with the novel. I don’t know why I was so determined to finish that book, but I did. It took me forever!” 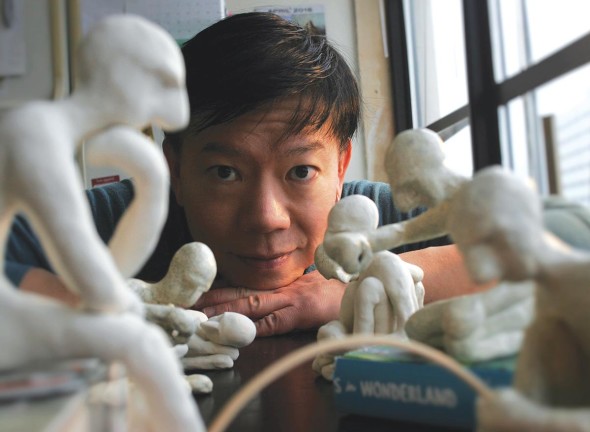 The artist recalls that story “vividly,” and it helped to ignite his desire to travel, which he does quite often. Shortly after Daniel had arrived in this country in 2000, his first “eyes-on” experience of art in America took place at the Metropolitan Museum of Art in New York.

“I had always loved the Renaissance, but I had only seen works in books and on the Internet. Seeing the originals blew me away—I stood in front of masterpieces by El Greco, Caravaggio, Titian, and Botticelli for hours—the Met was my temple.”

Determined to pursue higher education in America, Daniel worked very hard to earn a B.A. in Linguistics (2003) and an M.A. in Art Studies/Art History (2006) from Montclair State University in New Jersey. His masterful artistic talent helped him to gain his United States citizenship in 2014. A year later, he successfully defended his thesis to complete a Ph.D. in Sociology from the University of Tennessee in Knoxville.

Each of his mixed-media sculptures begins with one or more hardcover books. Daniel combines recycled volumes with other found objects such as pencils, crayons, feathers, eggshells, or keys, plus hand-molded, oven-baked clay figures. These three-dimensional, gender-neutral humanoids—in a wide assortment of postures—welcome viewers to imagine themselves posing within his fascinating sculptures. 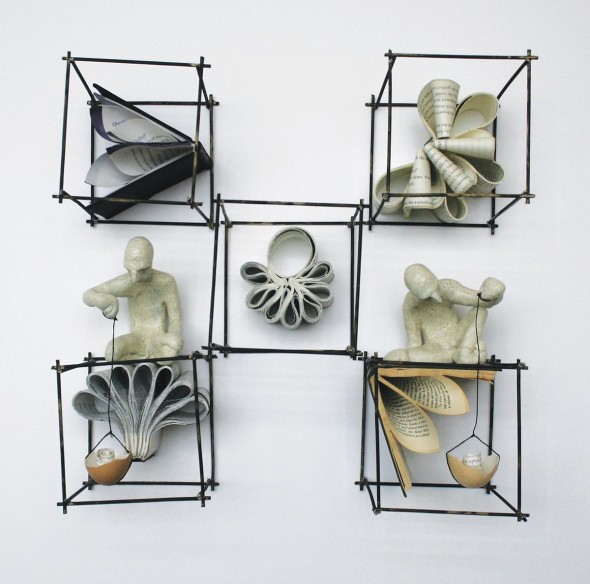 When asked whether there are parallels between his artworks and the arduous journey he took to recreate a new life for himself in the United States, Daniel spoke candidly.

“Creating art with anything discarded is profoundly meaningful to me. It is also very personal. Anything that one throws away has no or little value for the owner. I, too, had an old life that I wish to discard forever and out of my memory. But that is not how life works. Growing up gay was extremely difficult for me. I wanted to get rid of the loneliness and doubts. My new life began with the kindness and education I experienced in the United States. It was a metamorphosis.

“I learned my worth and accepted who I truly was and am. I embrace my past and the pain it brought me because they made me who I am. Thus, in my art, I do not deny the identity of the old book. I acknowledge that they were used and old and convey their need to be transformed into a new life. We, as humans, always transform into a new life without severing our past. We just can’t; it’s not possible.”

The sculptor says that “the books speak to me” each time he begins a new piece, but if you take time to study his work it is clear that Daniel’s own thought process runs deep. When does the sculptor title each work?

“There is no fixed moment as to when I title my work. Sometimes, a title comes before any artistic conception; sometimes it comes weeks after a piece is completed.”

Beneath his skilled hands, his pieces actually make the phrase “to curl up with a good book” come alive. Daniel’s sculptures, collected around the globe, sell out almost faster than he can replenish his inventory, but galleries, interior designers, and collectors don’t seem to mind the wait.

His participation in juried shows is extensive, and exhibition judges have recognized Daniel’s innovative work with numerous awards, including “Best in Craft” at the 2014 Piedmont Park Art Festival in Atlanta and “Best of Show” at 2015’s Artclectic in Nashville, and this list continues to grow each year.

Daniel Lai is represented by Bennett Galleries. He is exhibiting his work in the 4 Bridges Arts FestivalTM 2016 in Chattanooga, Tennessee, April 15–17. For more information, please visit www.daniellai.artspan.com or www.bennettgalleriesnashville.com.