Hope is in the Details: Rob Matthews’ Painting Renaissance 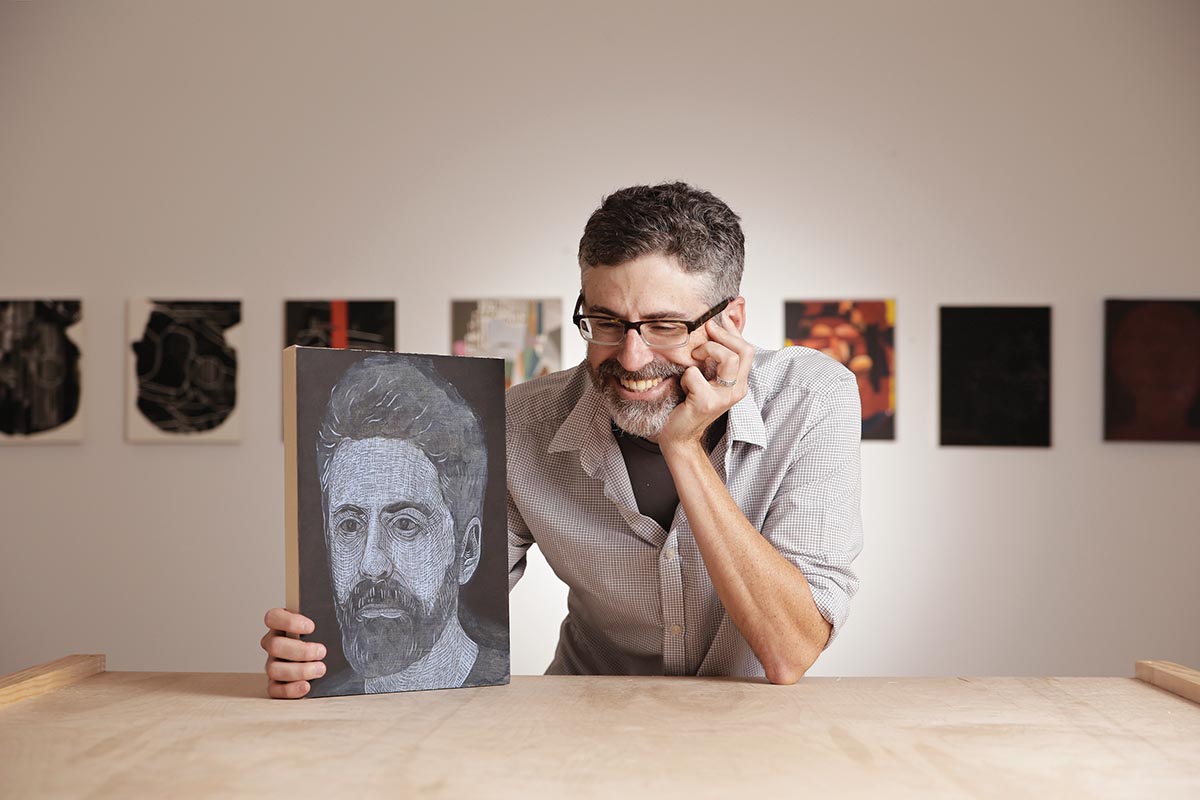 Rob Matthews is painting again. An artist who once convinced himself that if work is fun, then it’s not work appears to have found himself in a work-related situation that is, in fact, fun. Unveiled back in April at David Lusk Gallery with the show Dawn-Watchers Watch for the Dawn, his new style I would argue is not altogether unrelated in process and aesthetics, but a fraternal twin, so to speak, to his once-signature painstakingly intricate graphite-on-paper drawings. Born from the same imagination yet inherently divergent, they cannot exist independently. 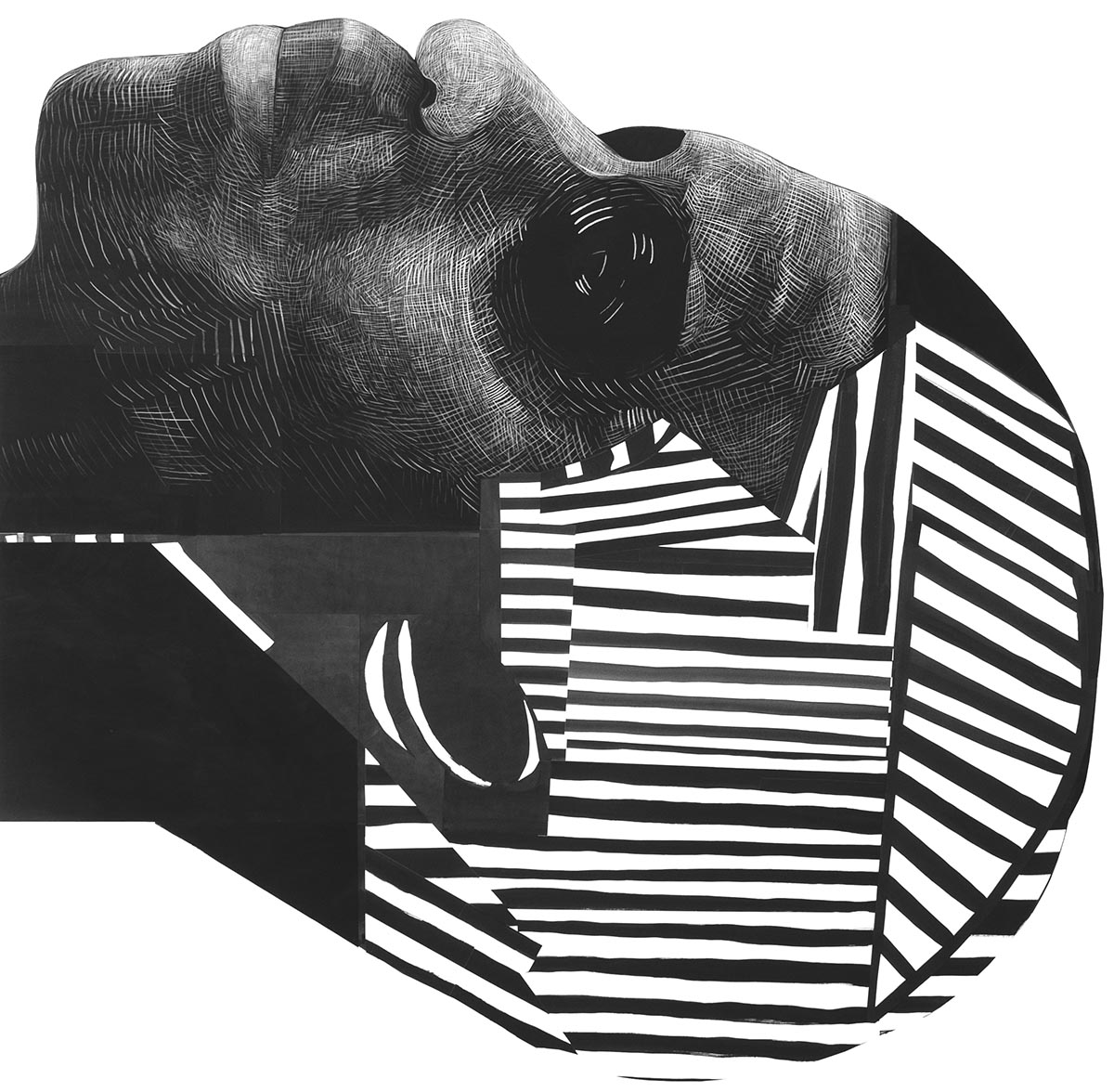 Matthew Ayariga, Gouache and ink on paper on canvas over wood, 81” x 69”

We are seeing the first notable uses of paint, color, and scale (larger than 11×12 inches) from Matthews in the 21st century. Until five years ago, Matthews spent his post-graduate career “hunched over a desk,” as he described during a recent gallery talk, producing labor-intensive graphite drawings—an unexpected turn for an artist with an MFA in painting and printmaking. “A two-year discussion of materiality and ‘is painting dead’? Nothing like an MFA to cure your painting bug,” he recounted of his Virginia Commonwealth University (VCU) program with a lighthearted sarcasm only hindsight can impart. The oldest public art school in the country, VCU wields an unshakable academic rigor and an intimidating classical black-and-brown palette, which Matthews, who just wanted to paint about subjects that mattered to him, found off-putting. In his disillusionment, he abandoned painting for drawing after completing the VCU program. 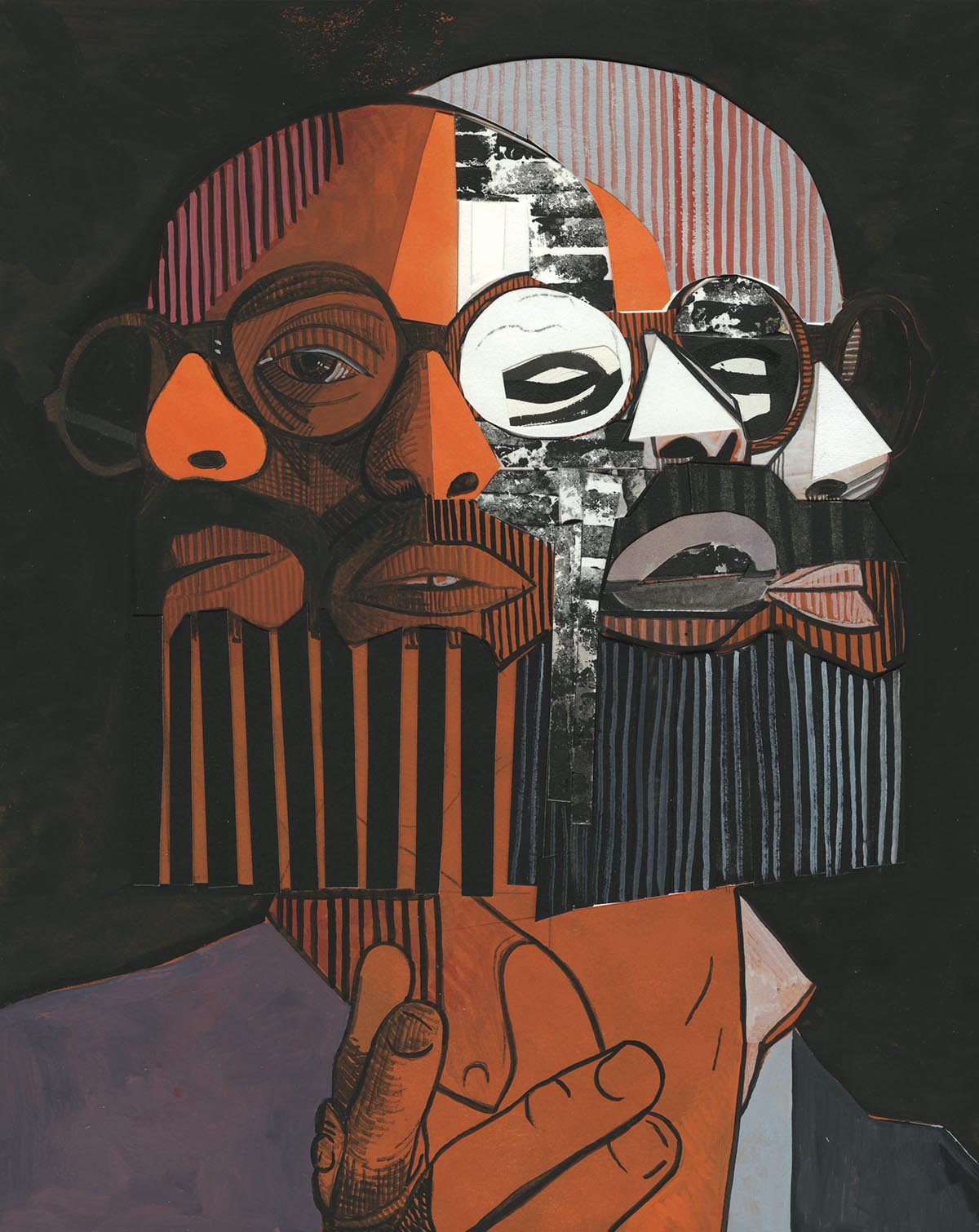 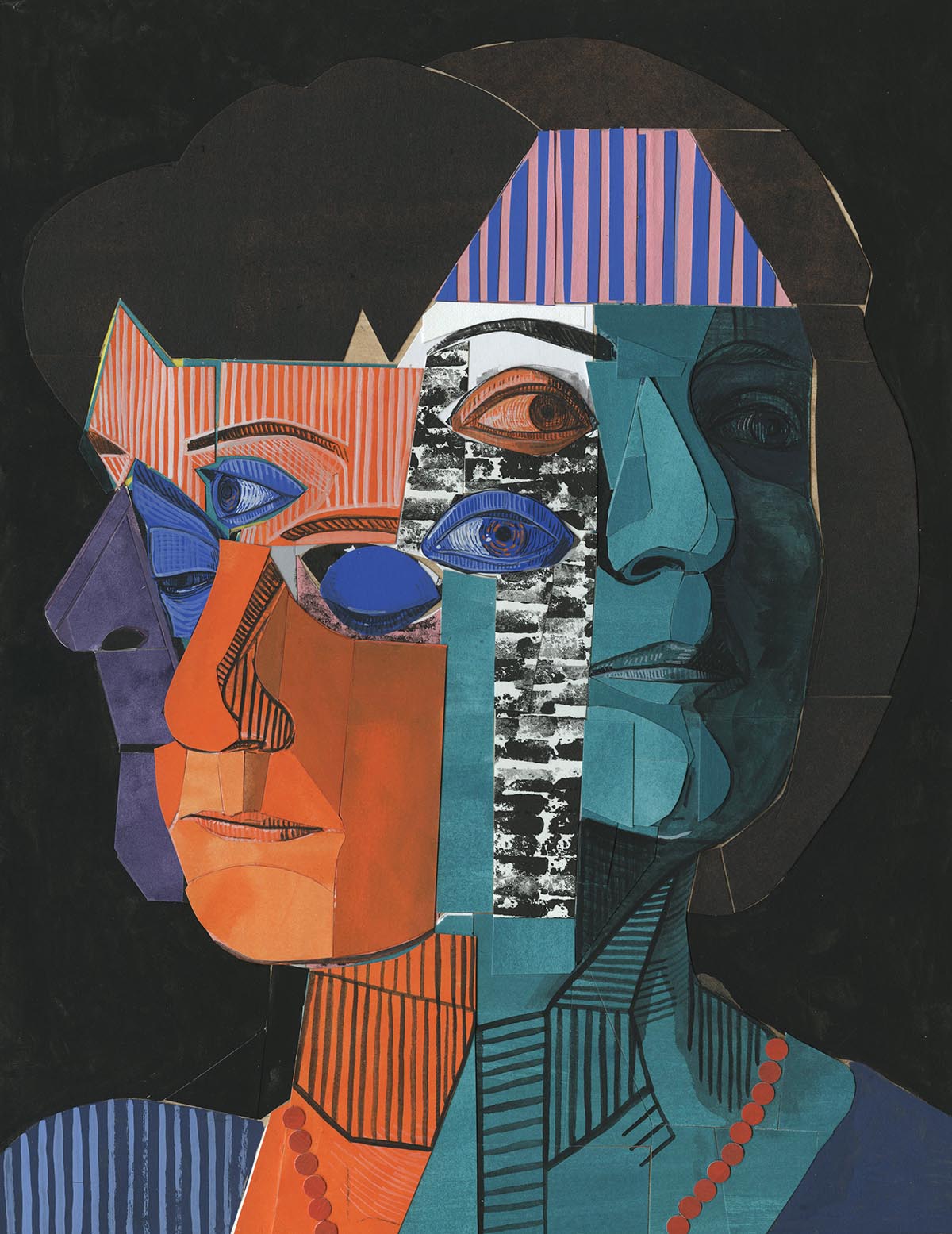 Over time, Matthews found the sedentary lifestyle precipitated by meticulous drawing to be unsustainable and, thus, the renaissance of painting we see in his work today. Dawn-Watchers is a combination of painting, yes, but also drawing, etching, and—considering the cut paper technique utilized in many of the works—collaging. While at least one art critic has linked the composition of Matthews’ The End of Time to Picasso’s The Pipes of Pan (1923), the painting’s cut-and-paste surface is just as telling to the artist’s influence from Cubism— think Fruit Dish and Glass (1912) in which Georges Braque invented papier collé—and its allusive patchwork, from the art historical canon as a whole. Matthews taught himself how to draw the human form by studying the oeuvre of Albrecht Dürer because his line hatching was the best produced in a book. Let’s not overlook The End of Time’s compositional resemblance to northern Renaissance marriage portraits, too, such as Jan van Eyck’s Arnolfini Betrothal (1434)—two evenly weighted main figures flanking an object or two of curiosity (see also Matthews’ Prophets), not to mention the borderline obsessive perfection of detail shared by the two artists. 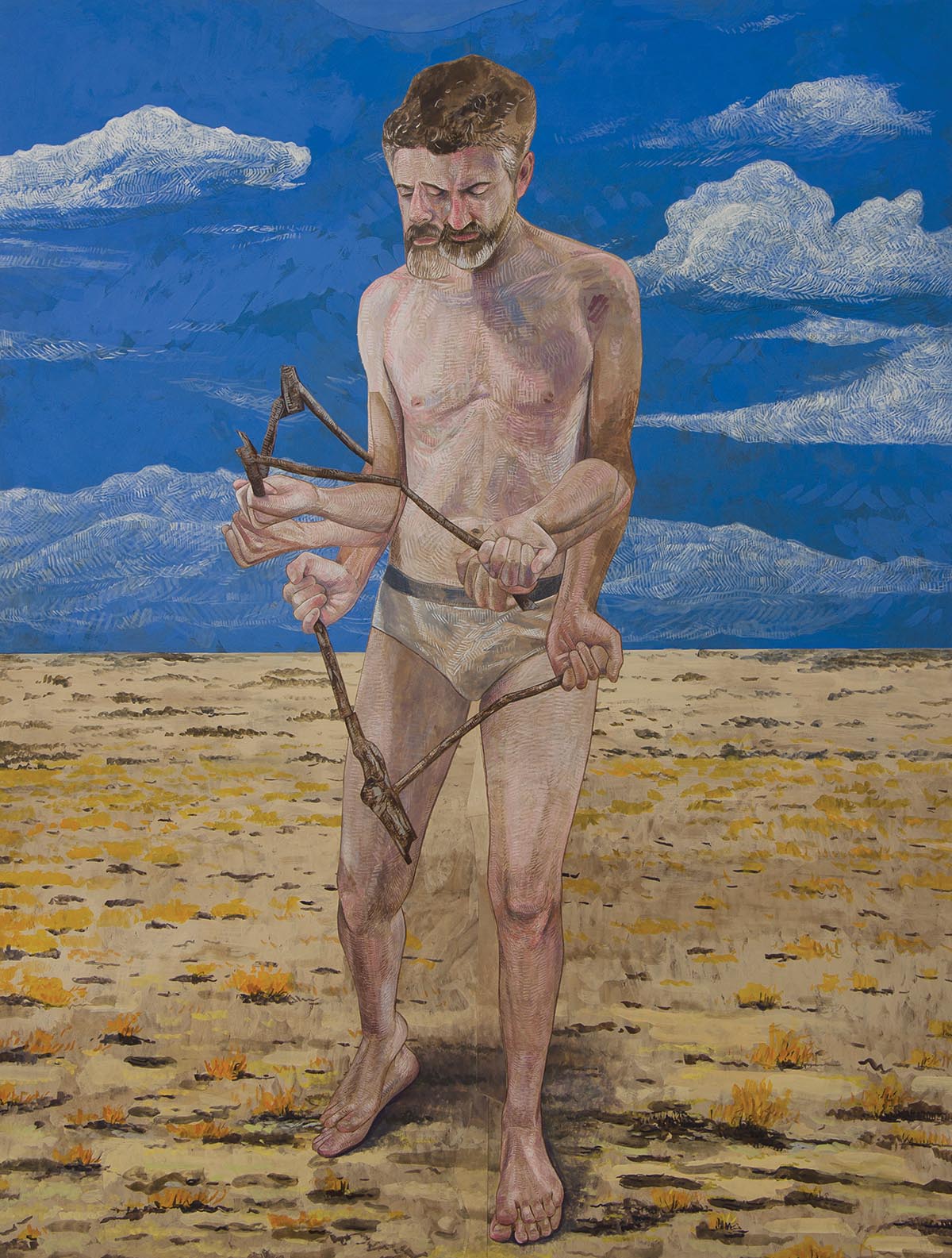 For all his historical references, Matthews is equally present. He is shaken by current events. ISIS activity in Libya and the subsequently propagated Christian beheadings have weighed heavily on the artist for “basically the entire 21st century,” he grimly quipped. “In 300 years, people will know this happened, but right now, I’m the only one thinking about it two weeks later. Considering how we interpret and dismiss news, I felt it necessary to let this linger.” Dawn-Watchers is the embodiment of Matthews’ meditation on this tragedy, and The End of Time is the anchor. “A beheading is kind of depressing to look at after 30 minutes,” he admitted, so he chose a less gory “not Goya” depiction of the act inspired by the Mediterranean colors of Picasso’s neoclassical period. The head of beheaded Ghanaian Matthew Ayariga discreetly enters the foreground from the bottom left, separated from the blood-red background landscape only by our captain’s jeaned leg. Its clean sever, likewise, detaches us the viewers from feeling—a subtle commentary on our learned callousness toward global suffering. 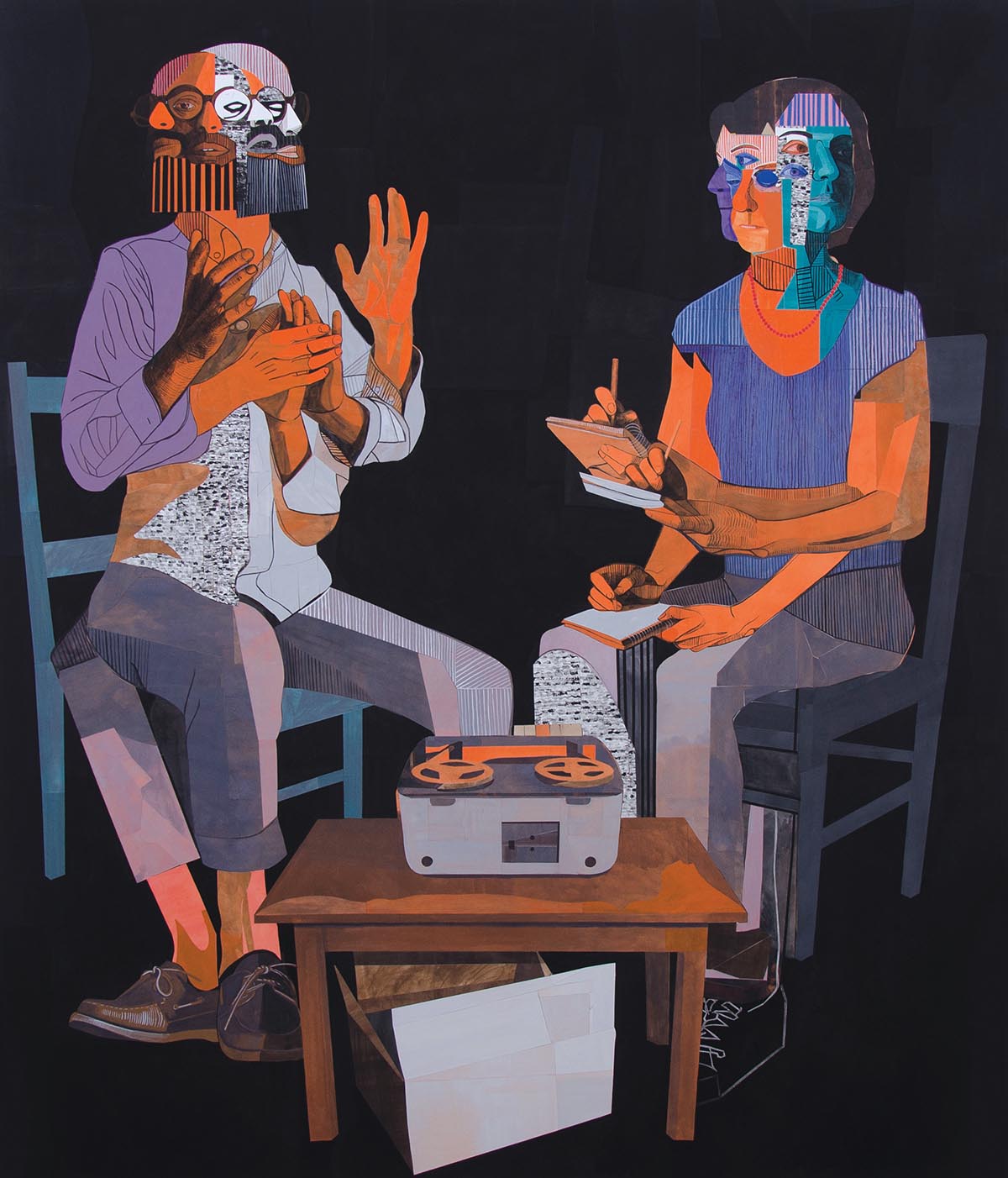 Matthews is the first person I’ve ever heard quote Bible scripture in a gallery. Fully conscious of its unconventionality, the artist read aloud the book of Psalm 130, from which Dawn-Watchers draws its name. “Sometimes you have to intentionally inject hope, because no one else naturally does that,” he followed up. Auto Auto Harp Harp, for example, depicts mirrored figures of a beautiful woman, whose coast-side beauty and enchanting musicality evoke a dangerous Siren quality, and poisonous mushrooms (center foreground) known for sickening refugees escaping ISIS. Alternatively, the female figures are familiar and welcoming, particularly for Nashvillians who may recognize the figures’ likeness to local artist Elizabeth Williams, and who may find comfort in music. Matthews wanted to dip his toes in the Music City zeitgeist without citing the cliché guitar. He chose the autoharp after seeing it in a book about the Carter family.

In The End of Time, the hopelessness of Ayariga’s beheading is balanced by the sheet music for “Quartet for the End of Time,” which was written by French composer Olivier Messiaen while imprisoned by the Nazis during World War II, in the captain’s hands. Based on the Book of Revelation, the masterpiece is unexpectedly optimistic and explores the removal of time as a barrier. Its function in Matthews’ painting is redemptive. The dual presence of hurt and hope is a parallel theme in both Matthews’ work and career. As “Quartet for the End of Time” brings hope to The End of Time, so does painting to the artist’s creative process. 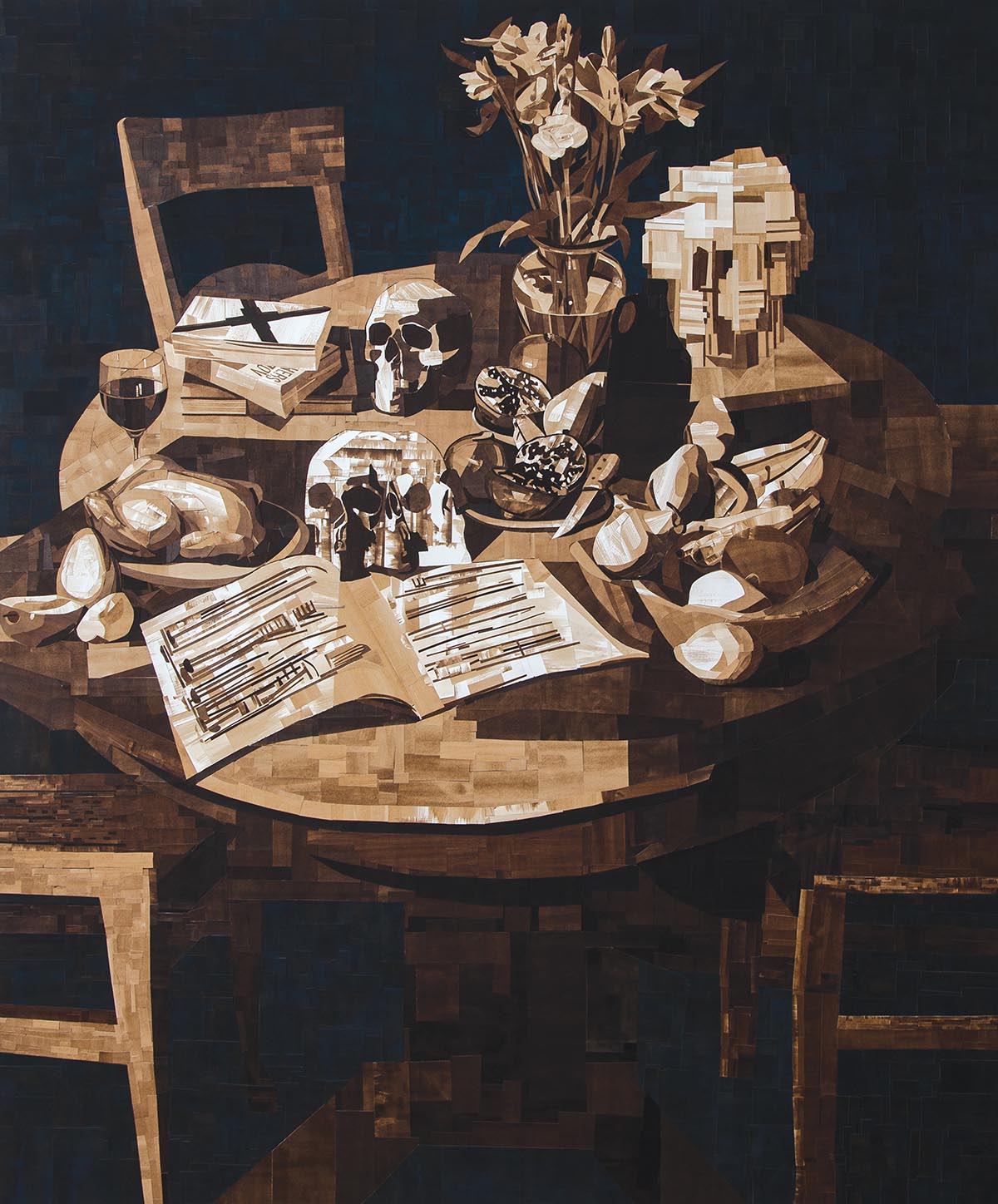 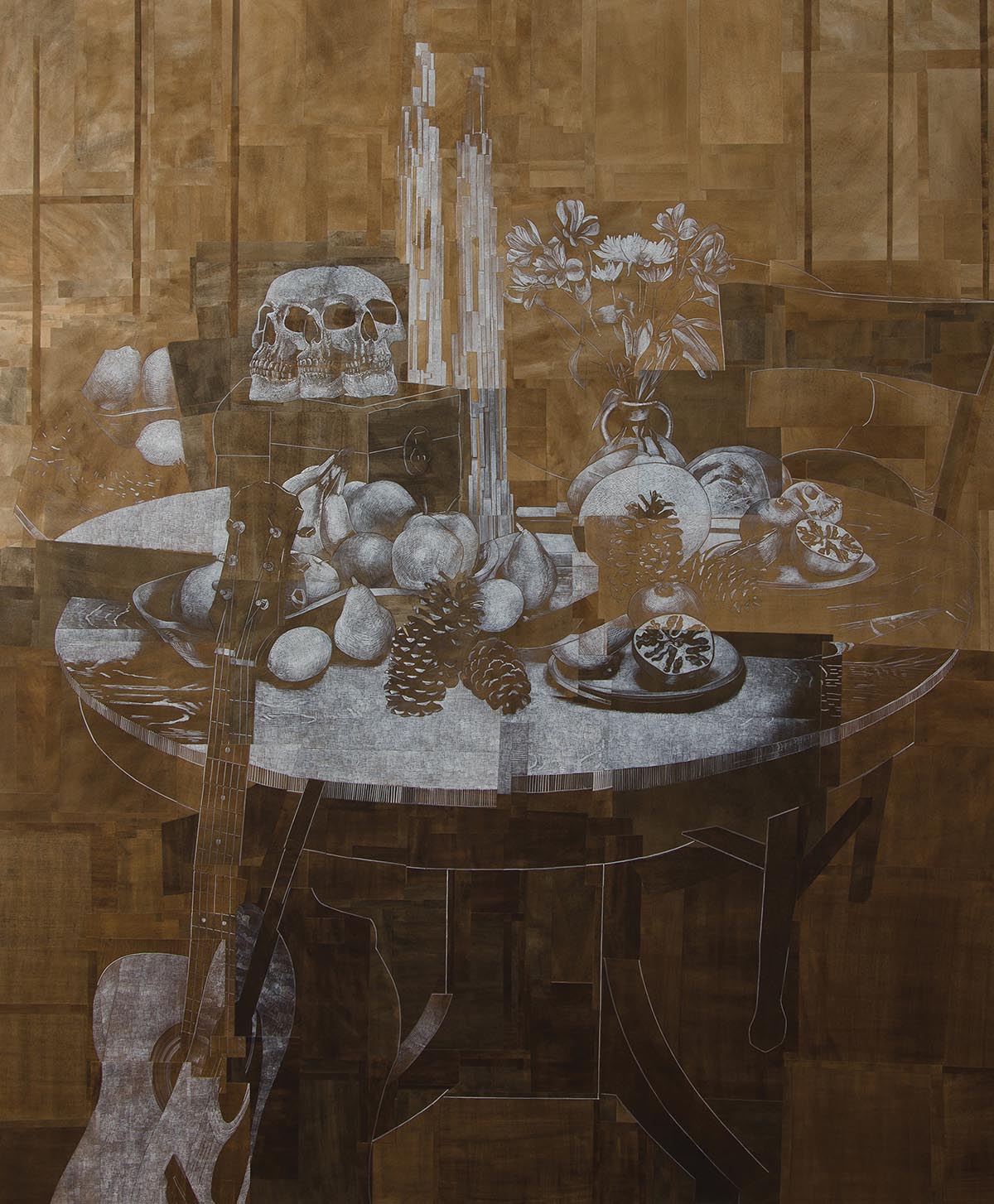 Still Life with Guitar, Gouache and ink on paper on canvas over wood, 72” x 60” 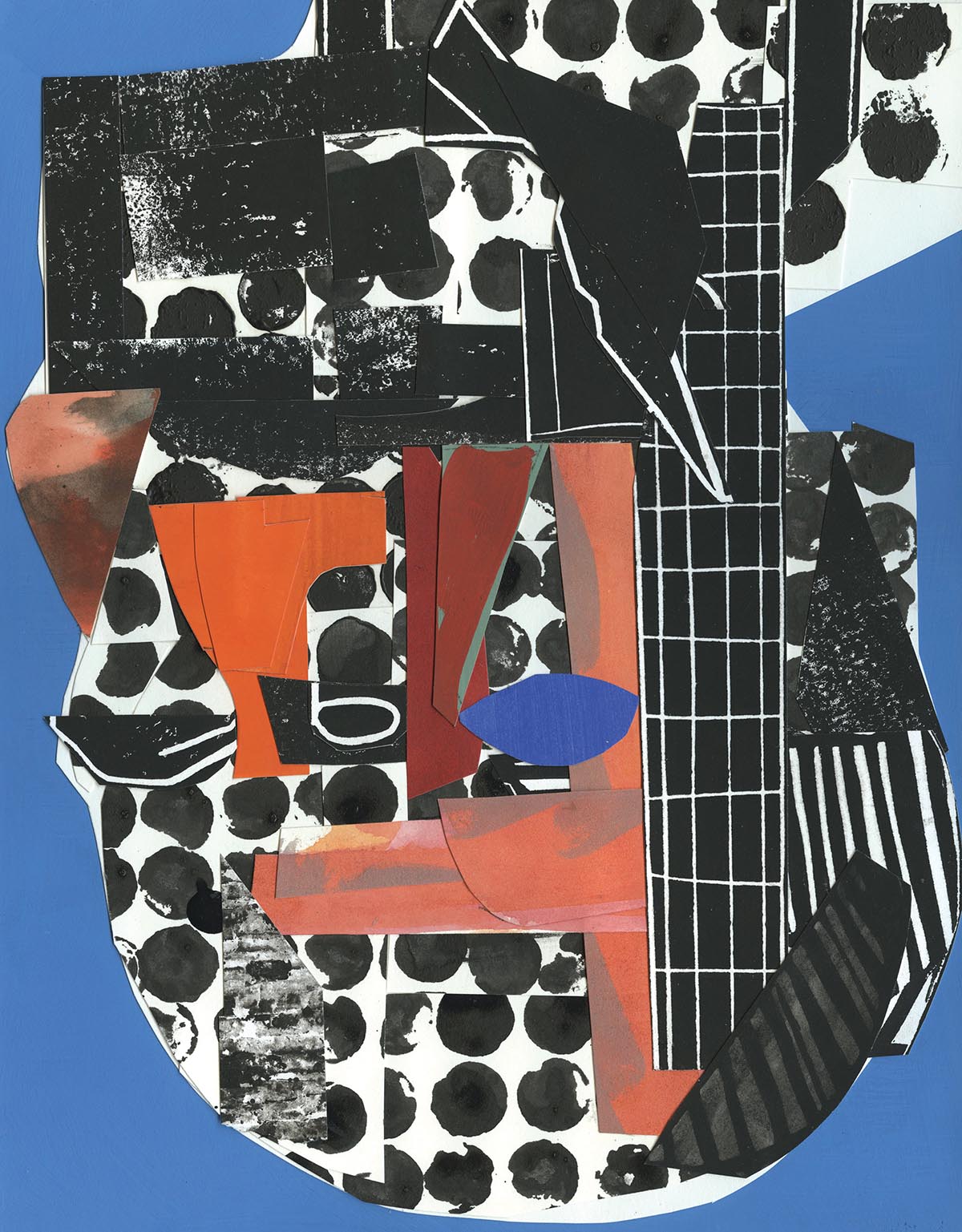 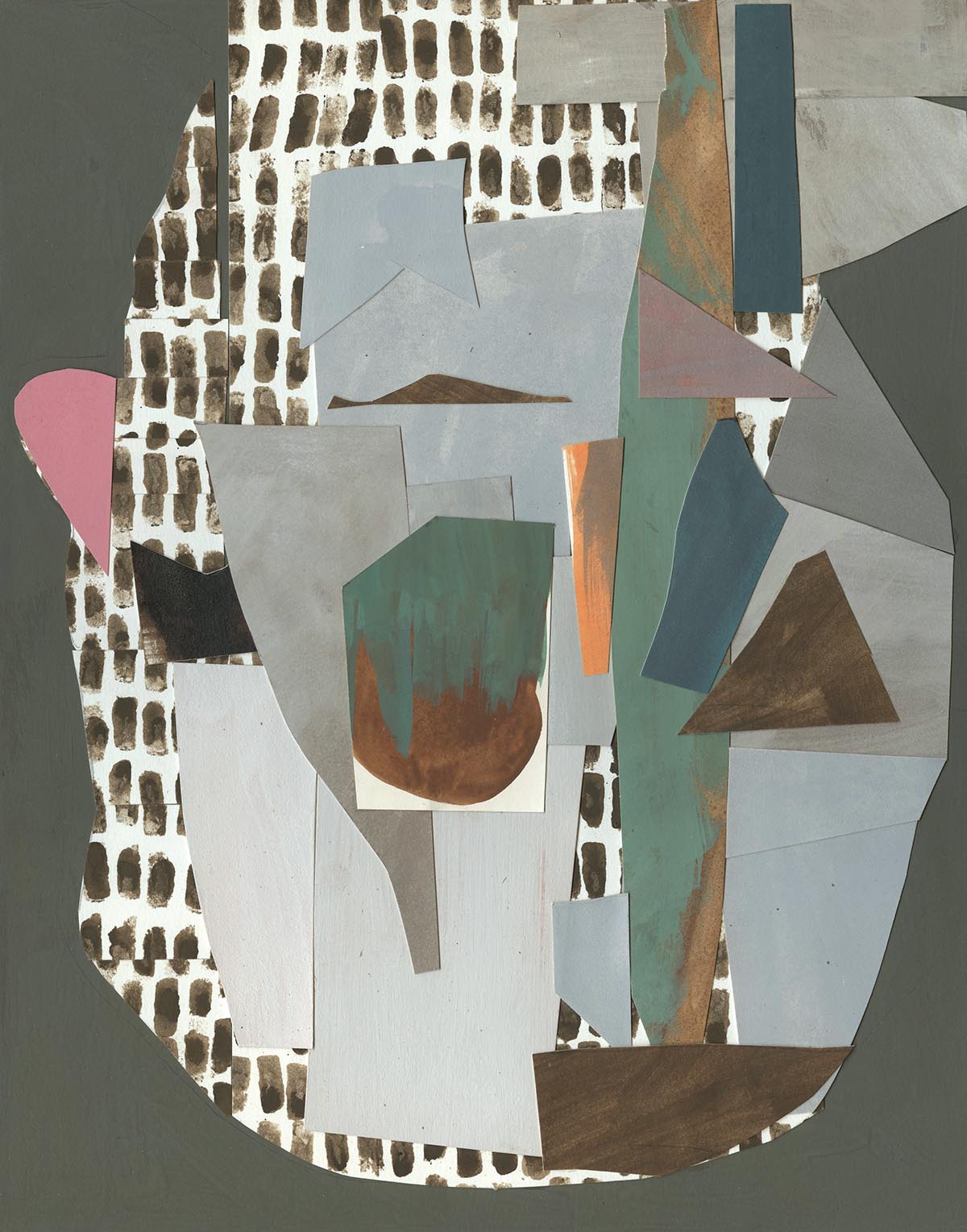