For self-taught oil painter Dana Oldfather, the success of an artwork begins with contrast. “When the work is strong and the volume is high, that means contrast is working.” 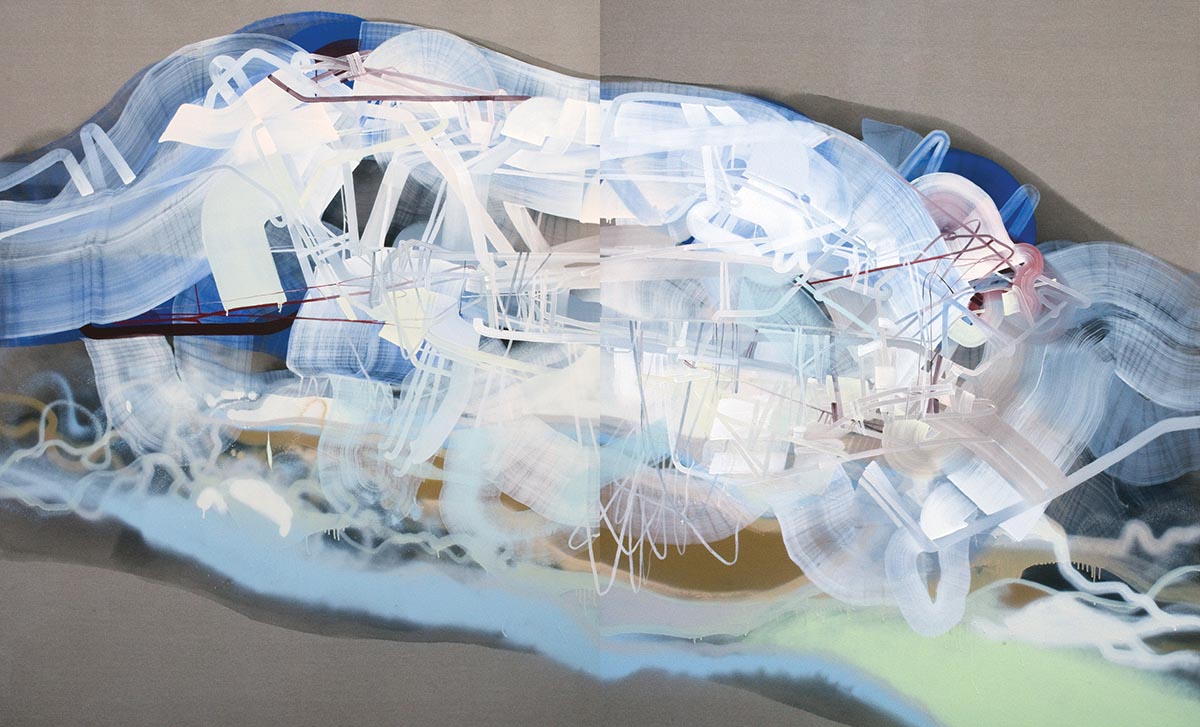 Oldfather is speaking via phone from her home in Cleveland, Ohio. Her latest collection of paintings, Sugar, will be on display at The Red Arrow Gallery during September. These candy-colored works are softer and squishier than any previous work by the artist. They’re like graffiti made with ice cream or smooshed cotton candy that somehow learned to fly. “Things are hovering, floating,” Oldfather says. “There’s never really a horizon line. You’re not sure if things are high or if they’re in a puddle on the ground.” 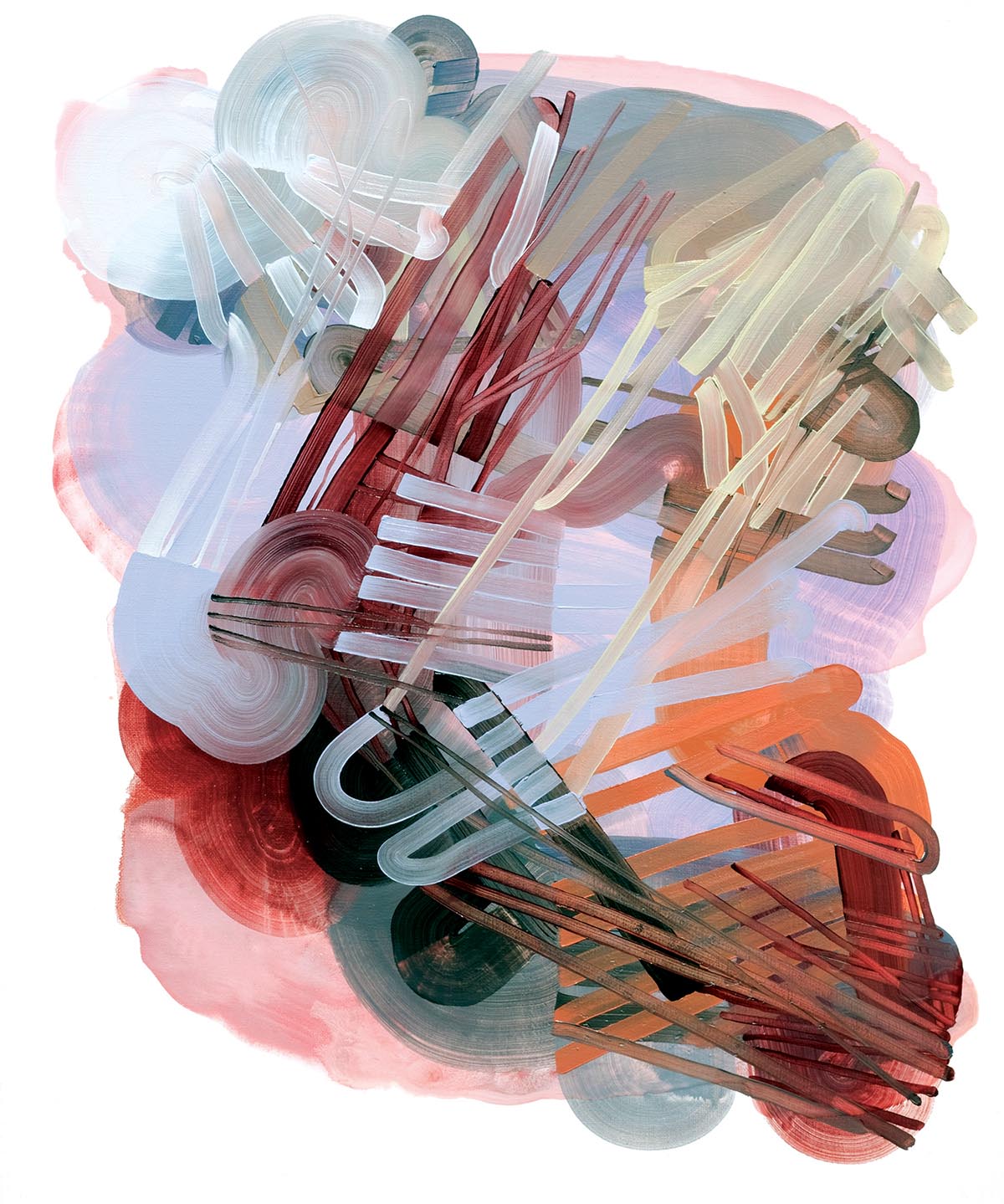 These imaginary objects (or perhaps creatures, or maybe environments) are birthed from contrast, like a chemical reaction between anxieties and joy. Some of the works can radiate feelings of dread and other insecurities, and at the same time, they can be mouthwatering and appealing. They float and tremble, or melt and ooze.

“There is always joy and there is always tension in my work,” Oldfather says. “I don’t think of them as two separate things. It’s one complete thought. Like the act of washing a dirty window: there would be no reason to clean it if it weren’t covered in soot and grime. For some reason, though, when we think about the act of cleaning a window, or vacuuming a floor, we focus on the tidying part (or the joy), but the act wouldn’t exist if not for the mess.”

Oldfather is the daughter of a professional painter, so art has always been a part of her life. Family dinners were conversations about contemporary art and art history. She was painting with oils by the age of five, but only began to devote herself to the medium in her twenties. 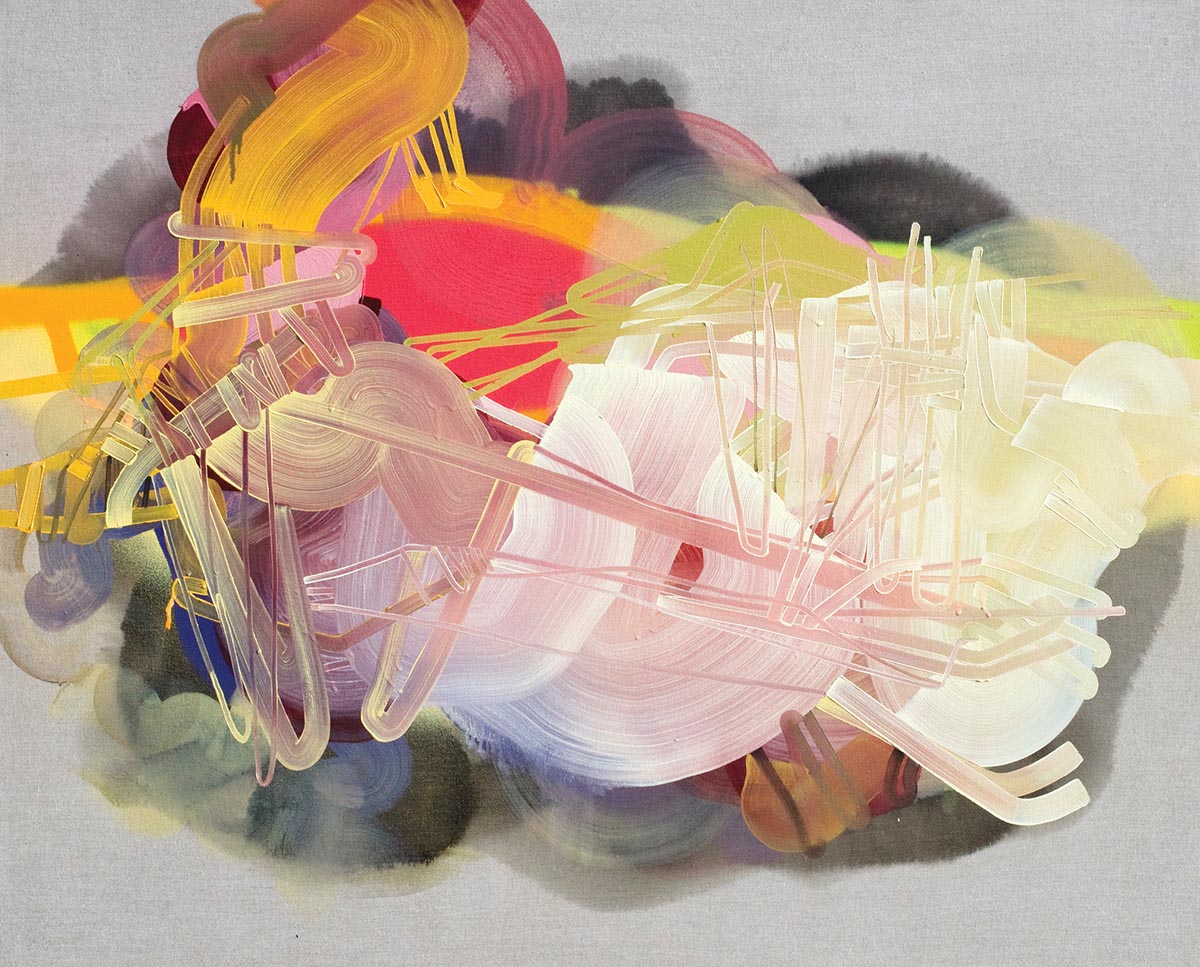 “I didn’t have instruction from anyone, so I failed,” she says with a laugh. “I failed pretty miserably.” It was only when she began to remove all figures from her paintings that she felt it was working, a process that took more than ten years.

“I wanted to be less literal about the emotion that I was conveying with paint,” she explains. “I really wanted to get more at the meat of what human emotion is, and I found that, for me, that was abstraction.” 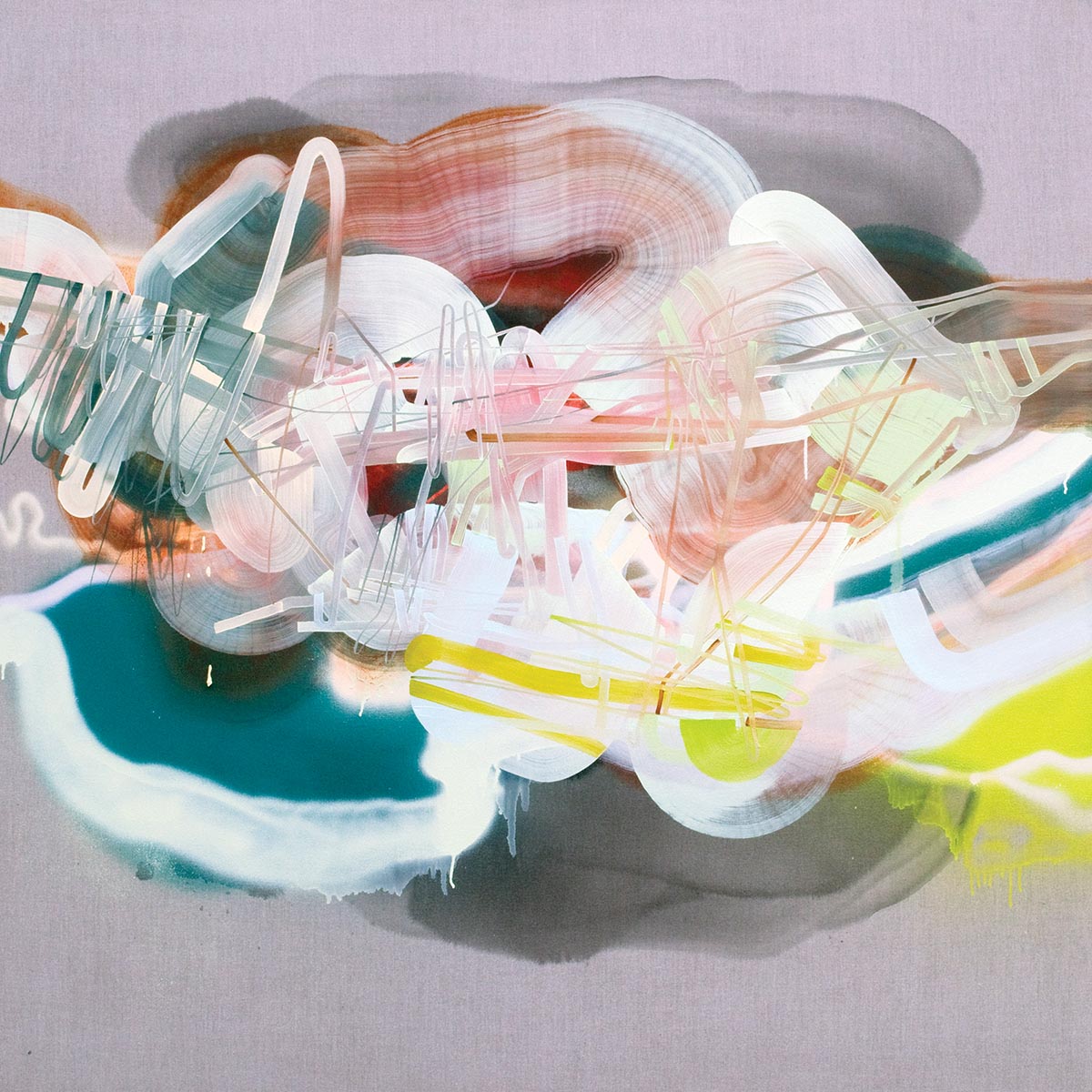 The layering process of her abstract paintings begins on linen, includes a few Helen Frankenthaler-inspired layers of ink bleed, followed by spray paint, homemade polymer pours, and then several layers of thin, solvent-heavy oil paint that is applied with oversize brushes. To create the giant, lumbering mass of the White Elephant diptych, Oldfather used two eight-inch brushes side by side. She describes this work as “tearing ass through a grassy field, or whatever anybody wants it to be running through. But it’s definitely running.”

Oldfather currently lives in Cleveland, Ohio, with her husband and two-year-old son. It was the role of motherhood that “blew the doors wide open” for this current body of work. She speaks frankly about her role as caretaker and how it fits into the life of an artist.

“I feel like, as a mother, you are assimilated into some other life,” she says. “You don’t have an identity anymore but to be the outlining edge to someone else’s life. And that’s really hard for me. It was a shock, how much one gives up for a family, and I bounced off that and started making this really urgent, desperate, meaty, visceral work.” 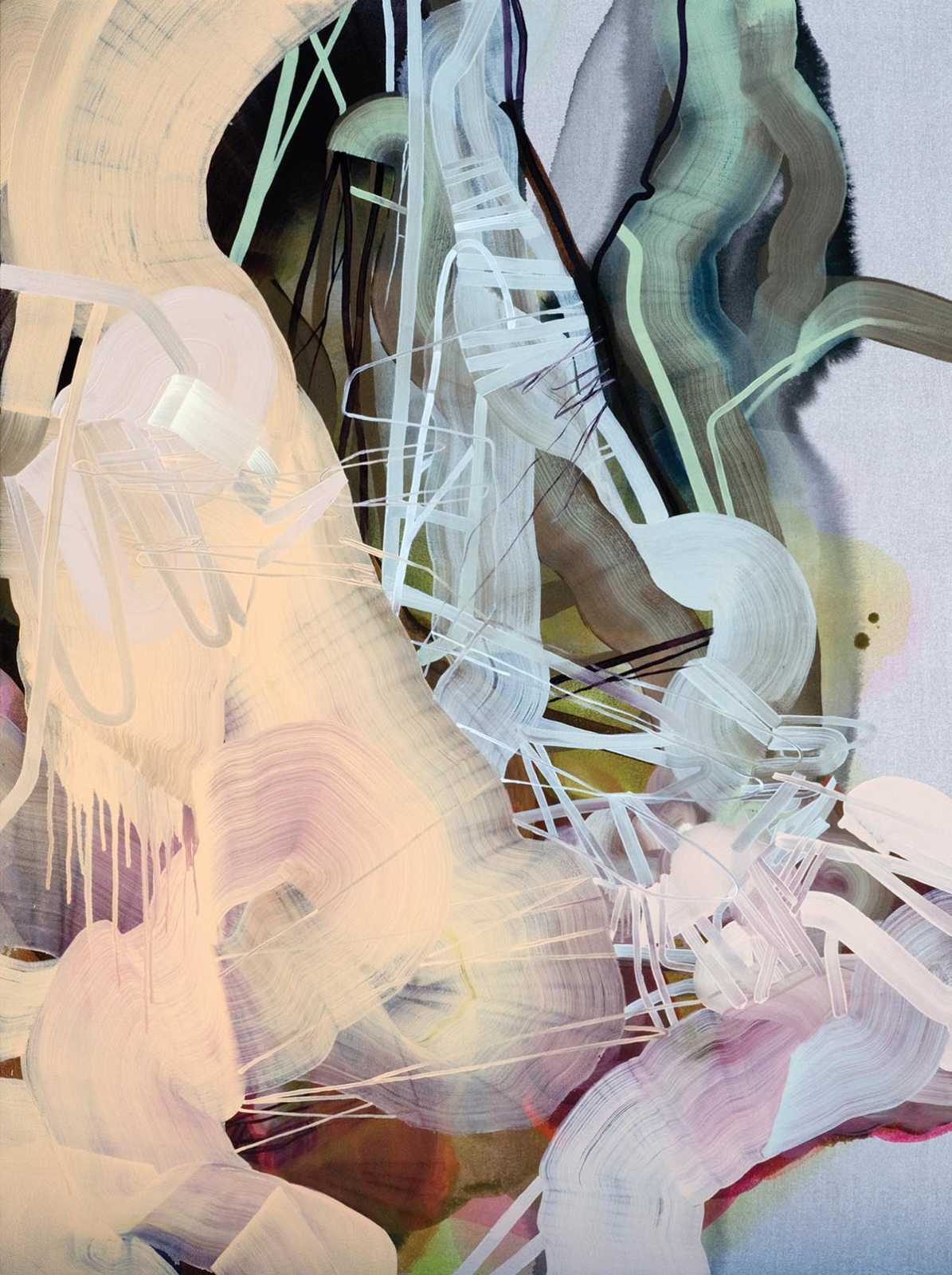 In some ways, this need to create is simply another type of motherhood. Oldfather is exerting her power as a creator, and like many artists, she describes her paintings as though they were her children. She describes them as protecting themselves or supporting themselves; they have autonomy.

“You put all this time and thought and preparation into making these little bodies,” Oldfather says, “and I reflect on how bizarre [it was] raising an infant. I’m shocked that any of us make it to adulthood, because children are so fragile.”

Think of the last time you heard someone tell a baby, “Oh you’re so cute, I could just gobble you right up.” The tender horror of that statement is fitting for Oldfather’s show.

Dana Oldfather’s exhibit, Sugar, opens at The Red Arrow Gallery with an artist’s reception on September 10 in conjunction with the East Side Art Stumble and runs through October 2. For more information, visit www.theredarrowgallery.com and www.danaoldfather.com.

“There is always joy and there is always tension in my work. I don’t think of them as two separate things. It’s one complete thought. 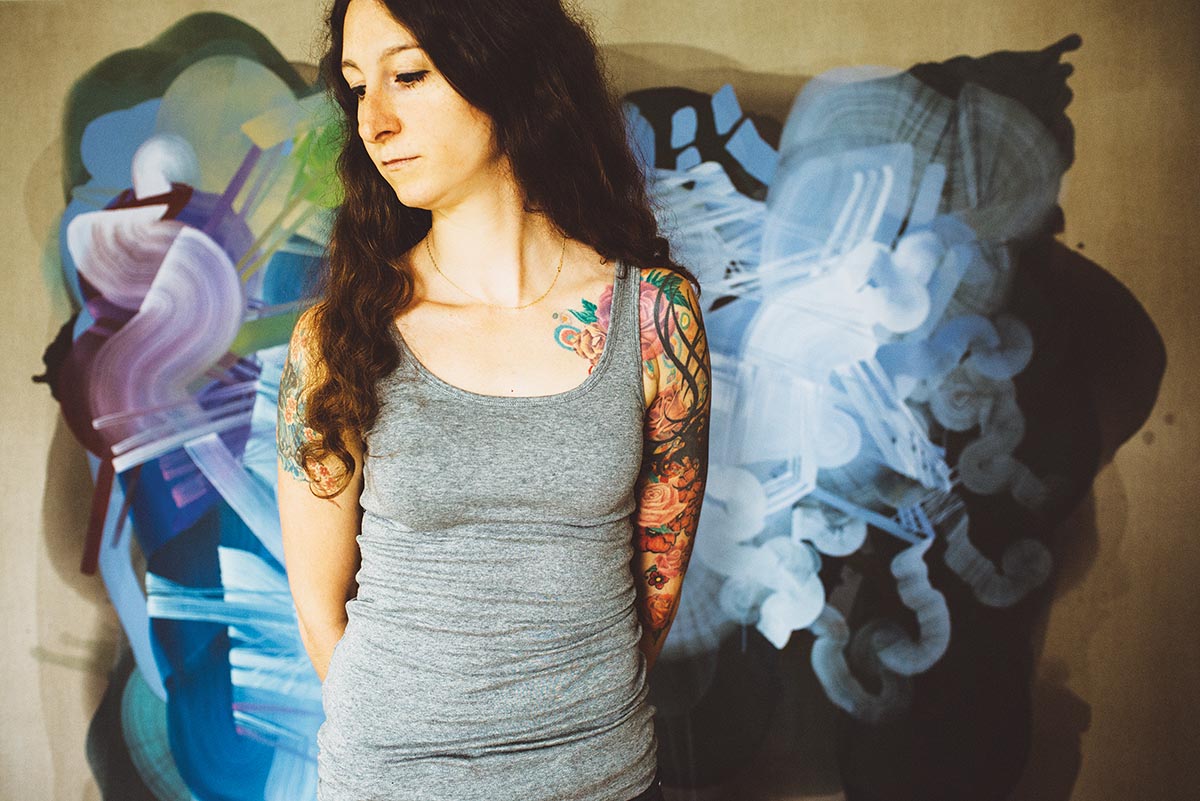