It was the golden hour at Cheekwood, that hour just before dusk when the fading sunlight seems to cling to earthly things, when Intersection and New Dialect began their Third Season in the color garden with Steve Tobin’s Naturalist/ Modernist sculptures as a backdrop. 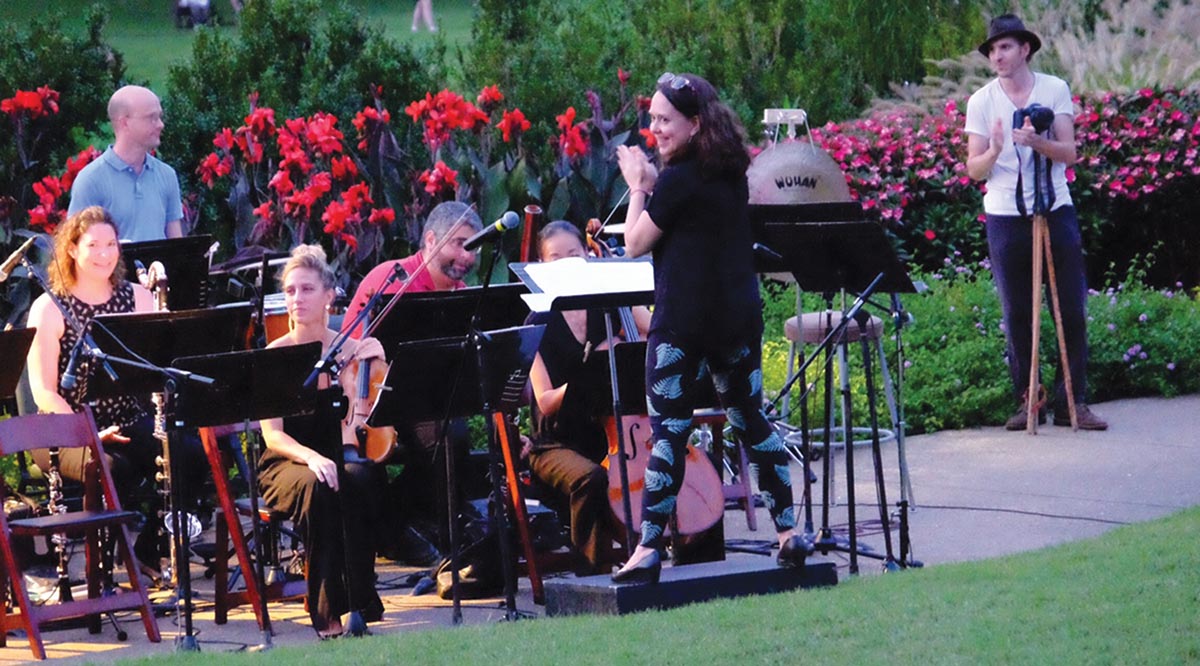 Dressed in grey and off-white, the dancers of New Dialect, a local dance collective, were grouped in flocks and migrating across the grass for Murmuration, a choreography written by Banning Bouldin to Sophia Gubaidulina’s Concordanza as performed by Intersection, Nashville’s contemporary music ensemble. The two groups had performed this piece together two years ago, but for this concert it was “re-envisioned and recreated to engage with Tobin’s tree- root sculptures.” The original inspiration, a contrast between a starling-inspired sharp and delicate individual movement and the fluidity of group migration, was still present, but the sylvan setting leant it a natural authenticity. The end of the piece was the one truly disappointing moment of the evening: The New Dialect dancers moved on to perform structured improvisations in other parts of Cheekwood, leaving the music (and me) behind.

Intersection then performed Jonathon Holland’s His House Is Not of This Land (2015). Holland’s work features a haunting, gospel-influenced dialogue among the strings played with nuance and eloquence by Alicia Enstrom (violin), Carl Larson (viola), and Chrissy Kim (cello). Next came Osvaldo Golijov’s Lullaby & Doina, a Yiddish lullaby set in several variations, which slowly metamorphoses into a gypsy theme. Here the enchanting, nostalgic klezmer sound of Emily Bowland’s clarinet was warmly accompanied by a late-summer breeze in Cheekwood’s majestic trees. It was a magical moment.

As the sun slipped past the horizon, Intersection closed with Chen Yi’s somewhat menacing Wu Yu, and the dancers of New Dialect returned to the flower garden. I could tell from the smiles on the faces of the audience that followed the dancers that, in their absence, New Dialect had probably performed as beautifully as Intersection.

For information about their respective seasons, visit www.intersectionmusic.org and www.NewDialect.org.