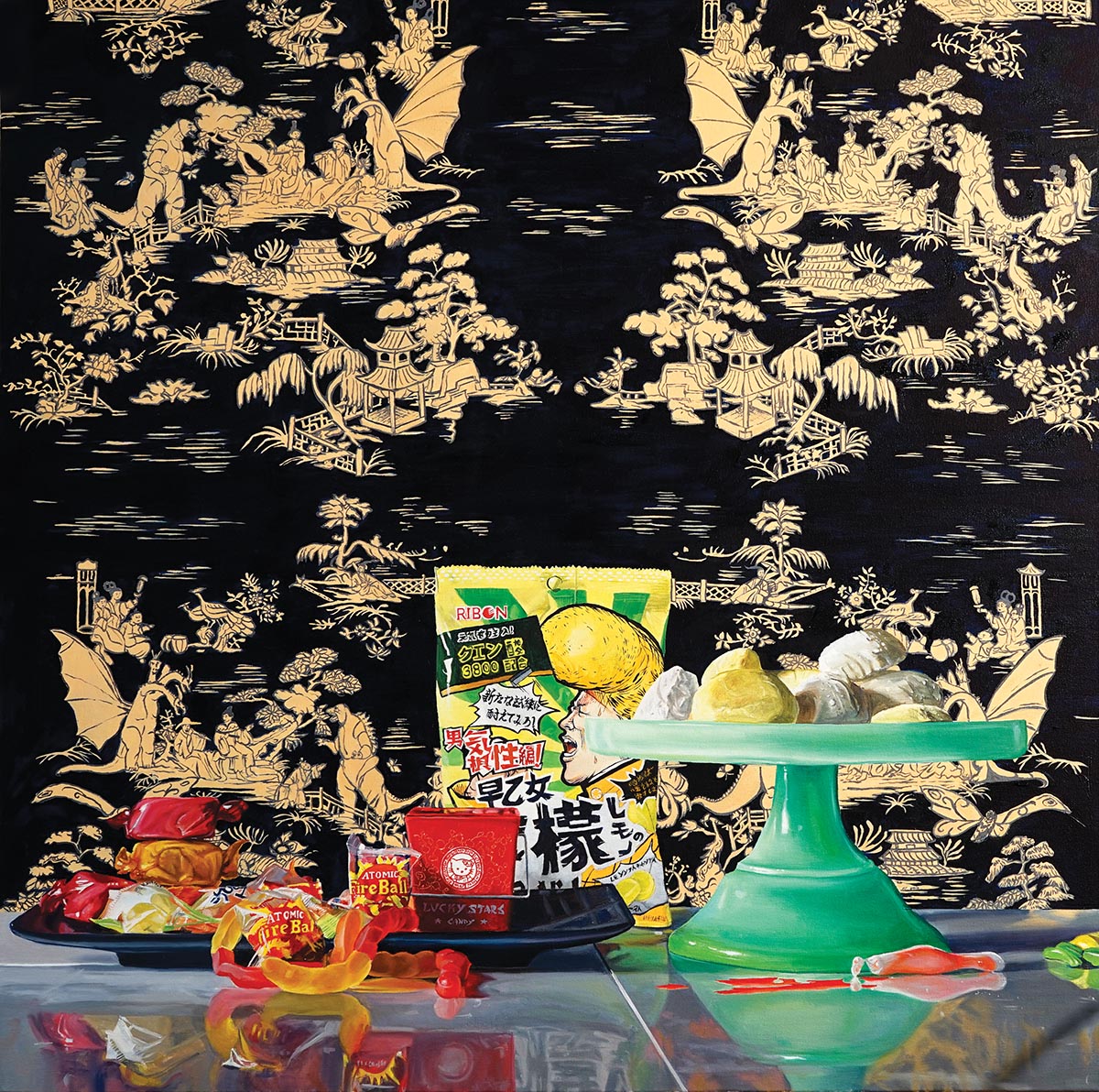 When you think about it, food as metaphor is everywhere in art. Giuseppe Arcimboldo constructed human faces out of fruits, vegetables, and other inanimate objects to indulge Renaissance-era patrons’ taste for enigma. Food is a popular medium in today’s maker movement; rarely a day passes when I do not see the headline “15 Examples of Incredible Barista Art” or “Artist Uses Plates as Canvas” on social media. In broader visual culture, food is personified in Seth Rogen’s controversial adult cartoon Sausage Party. Still, Baroque vanitas imagery is the most obvious visual predecessor to Knoxville-based artist Denise Stewart-Sanabria’s still-life paintings of anthropomorphized food, which are on view at The Arts Company this month. Stewart-Sanabria may share a similar brush treatment with the 17th- century genre, but when Moon Pies meet French toile, surface-level does not suffice.

“The art world has become so insular. The rules have become so autodidactic that, in a sense, they lose track of what people have any interest in thinking about, talking about, or even looking at.” 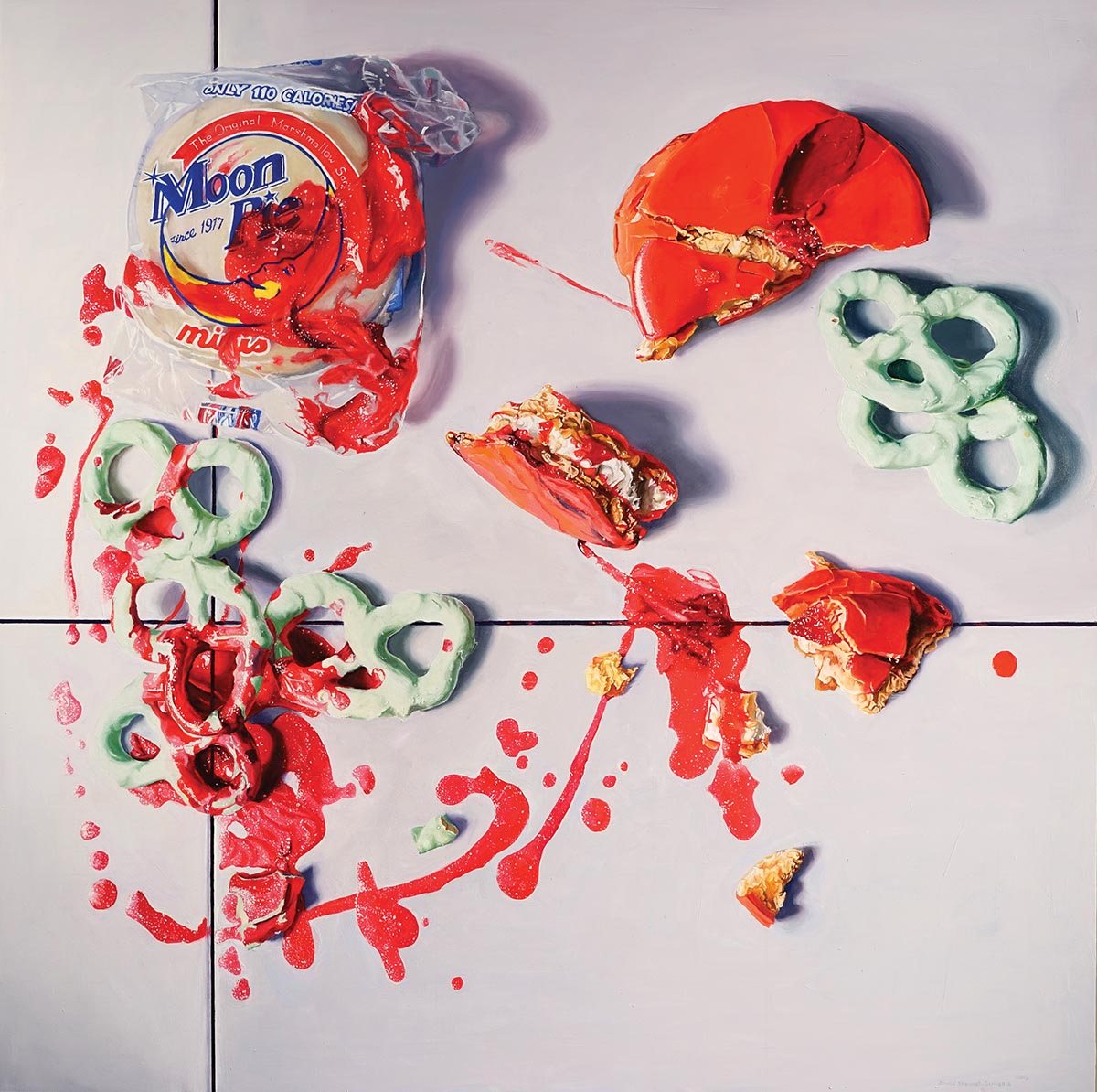 R-rated content is not what it used to be. “Most people today would find a Judith Beheading Holofernes uncomfortable in the dining room, but the average Monty Python fan will enjoy living with a Spanish Inquisition scene reenacted by pears,” Stewart -Sanabria explains. Nothing like satire numbs the visual sting of blood and guts, such as in #130 Classic Coral Cream Glitter. The cream of a red Moon Pie screams against a white countertop like blood strewn across a gory battlefield, except the fallen soldiers are green yogurt-covered pretzels. Perhaps Stewart-Sanabria is equal parts Pieter Claesz and Rogen after all. Societal criticism for Claesz meant rotting food and plants as a reminder of impending death to lushes of the day. For Stewart-Sanabria, it is far more comedic, depending on viewers to acknowledge and find humor in humanity’s tendency to anthropomorphize, Stewart-Sanabria notwithstanding. “It’s cruel to have one,” she answers with good nature when asked her favorite medium. “If I say I love them all, none of them will try to exact revenge on me by engaging in hostile behavior.” 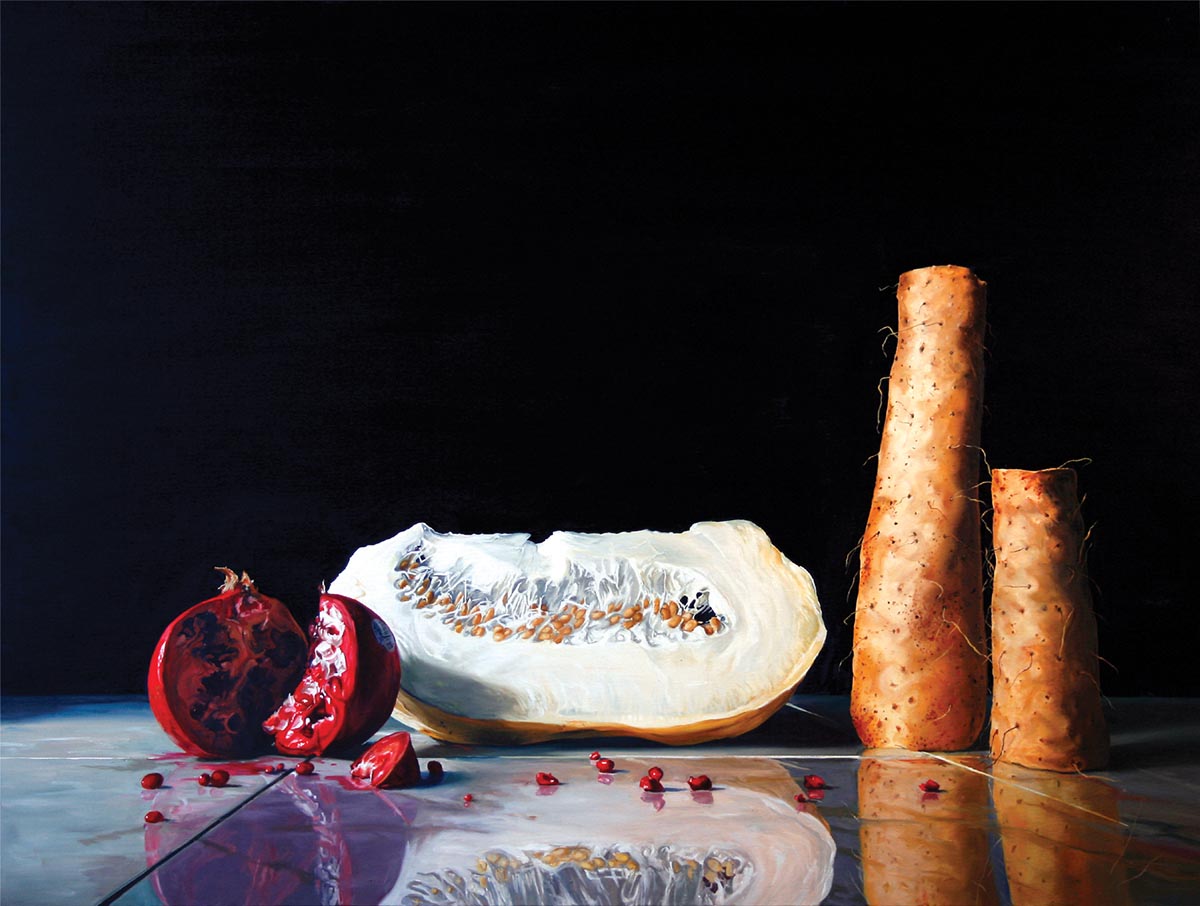 In its simplest deconstruction, Stewart-Sanabria’s signature still-life composition features decadent, lifelike desserts in the foreground, set against a toile-style wallpapered background. As an ironic device, she inserts traditional toile patterns depicting Rousseau-influenced scenes of nature and bucolic life behind piles of artificially colored and flavored junk foods of the 21st century. In King Cake Glitter, a days-old-looking New Orleans king cake sits elevated on a pedestal and draped in colorful Mardi Gras beads in front of a classic black-and-silver French toile. 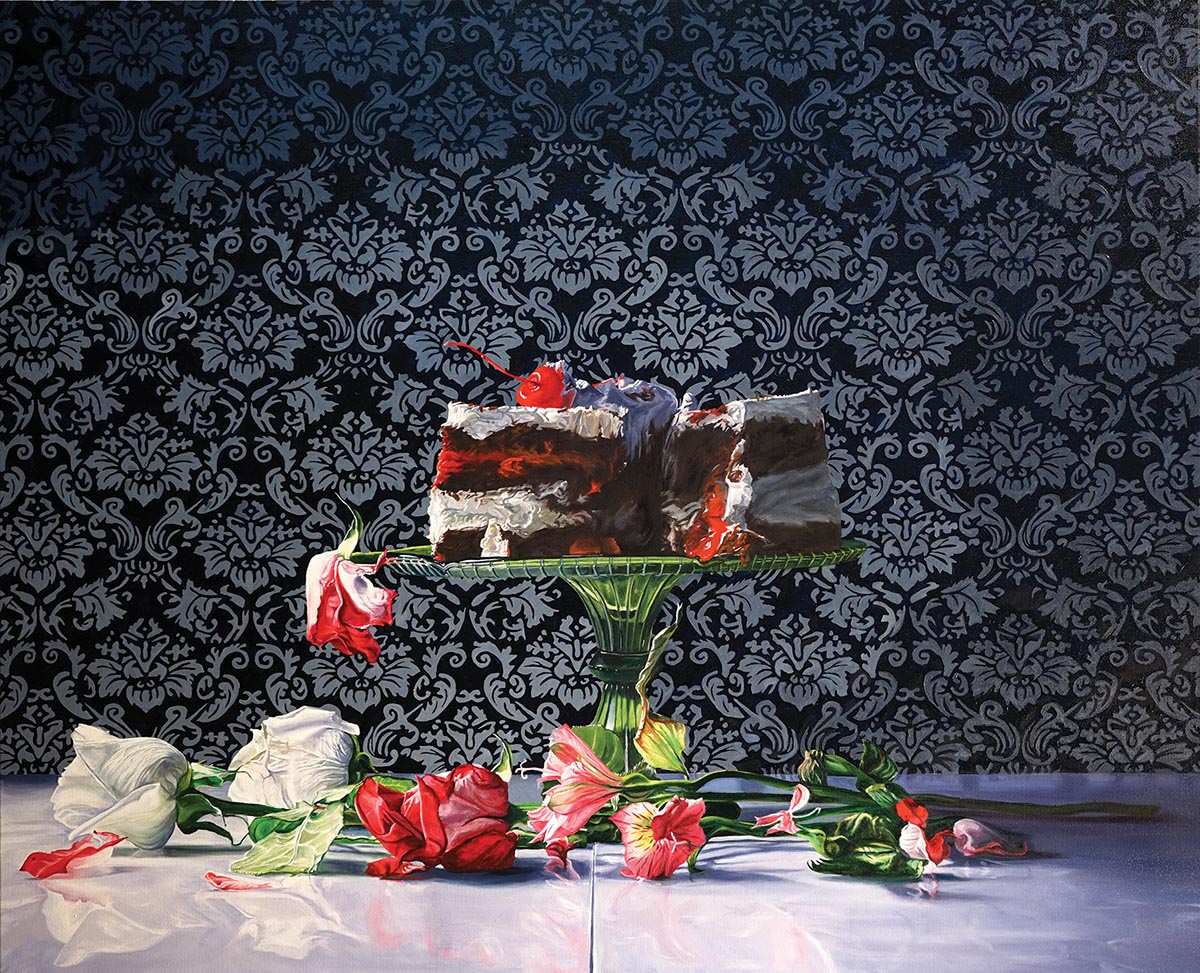 Stewart-Sanabria also twists patterns to include, for example, “Godzilla, Mothra, and Hydra frolicking alongside human flute players in an idealized landscape,” mimicking the Waverly Company’s Asian-inspired toile in Post Atomic Candy. According to the artist, “This painting’s confections reflect on the idea of nature creating mutations from exposure to radioactivity.” Does the toile work to expose these culinary posers for what they are not, or does it work to aggrandize our lowly snacks to a bourgeois status? Stewart-Sanabria’s vegetarianism and distaste for sweets support the former. This deeper criticism surfaces in knowing the artist’s social distance from the food she paints, same as one might experience with human strangers. Stewart-Sanabria tells a human narrative, her observations on popular culture and absurdities, that is easier for us to stomach (no pun intended) when the actors are, say, cakes. It is no coincidence that her perspective becomes more objective as the “caloric content” of her paintings increases. 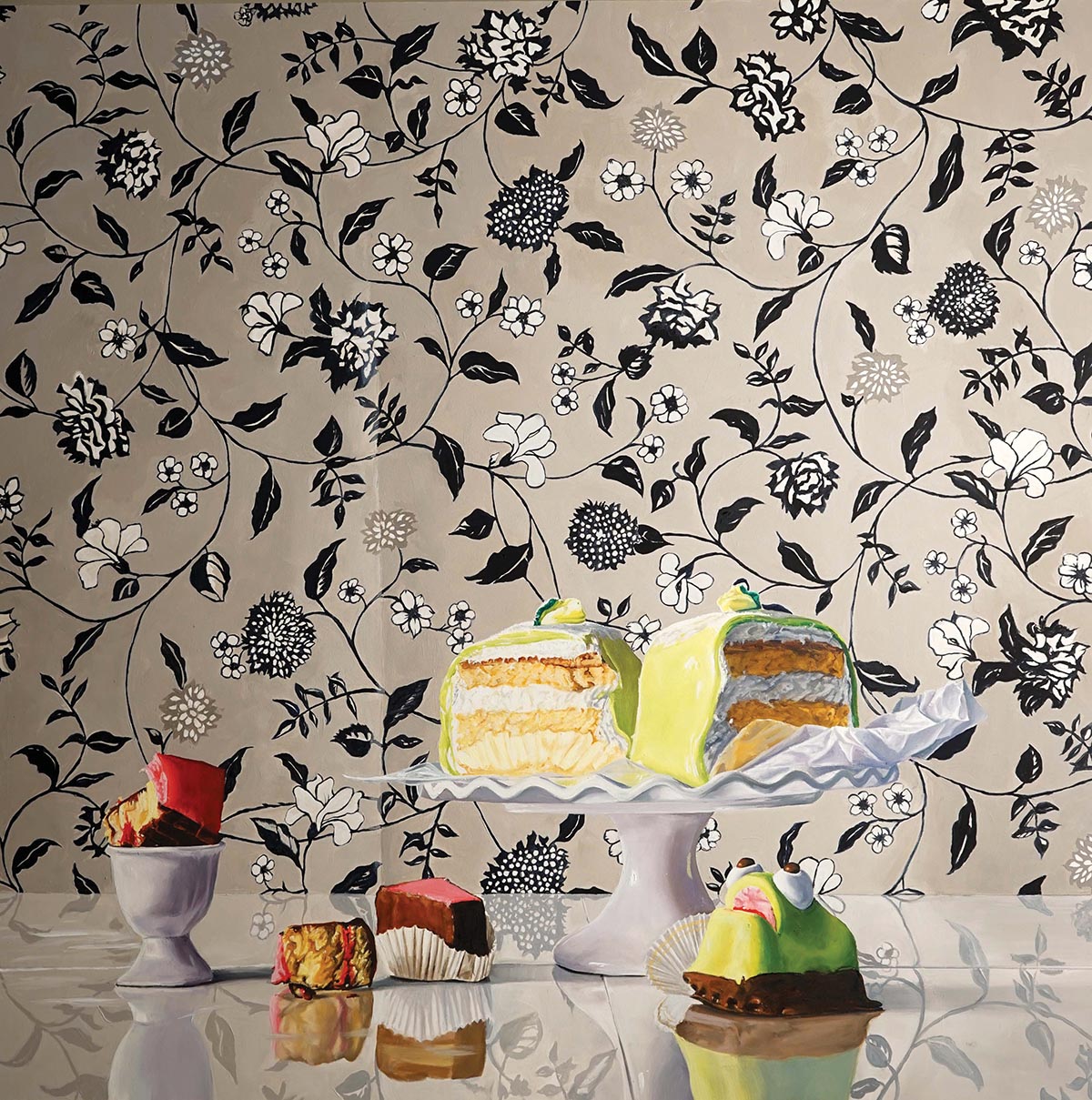 Stewart-Sanabria’s show also includes large-scale figurative drawings on wood. These nonallegorical human-shaped panels are “simple representations of individual personalities and how people interact in social settings,” she describes. A garment instructor for the theatre department at the University of Tennessee-Knoxville and versed in scale-model stage layouts, Stewart-Sanabria understands better than most the nuances of human behavior: “When the panels are in a gallery setting, they virtually interact with the live humans that encounter them. The people who live or work around them actually bond with them.”

Stewart-Sanabria’s paintings and wood panels represent two levels of reality—internal and external, respectively. Combined in the same gallery space, their interactions are exponentially complex and complementary. Because the food is an allegory for humanity, what’s transpiring on canvas could easily embody what’s transpiring in the minds of those depicted on wood. In 2014, artist Kehinde Wiley, who is also known to employ traditional painting conventions in a contemporary context, said to Interview magazine, “The art world has become so insular. The rules have become so autodidactic that, in a sense, they lose track of what people have any interest in thinking about, talking about, or even looking at.”1 Alternatively, Stewart-Sanabria approaches her art with an originality that is not self-absorbed and with a subject that humans will never tire of: other humans. 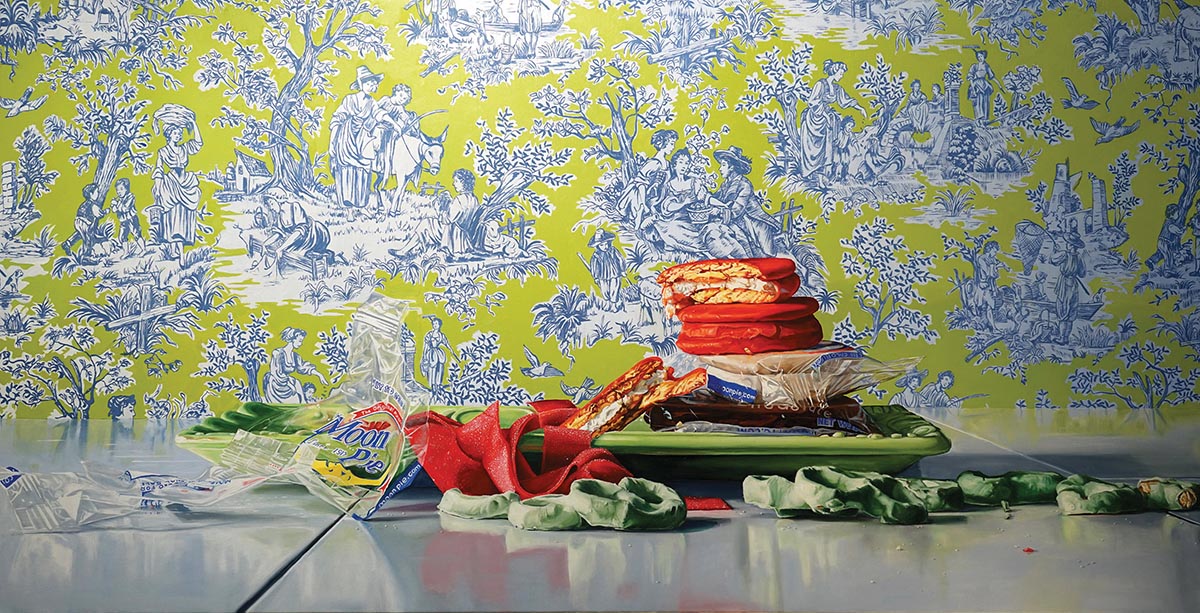 New Work: Paintings & Drawings by Denise Stewart-Sanabria opens with a reception at The Arts Company on November 5 in conjunction with the First Saturday Art Crawl Downtown and remains on view through December 23. For more information visit www.theartscompany.com and www.stewart-sanabria.com. 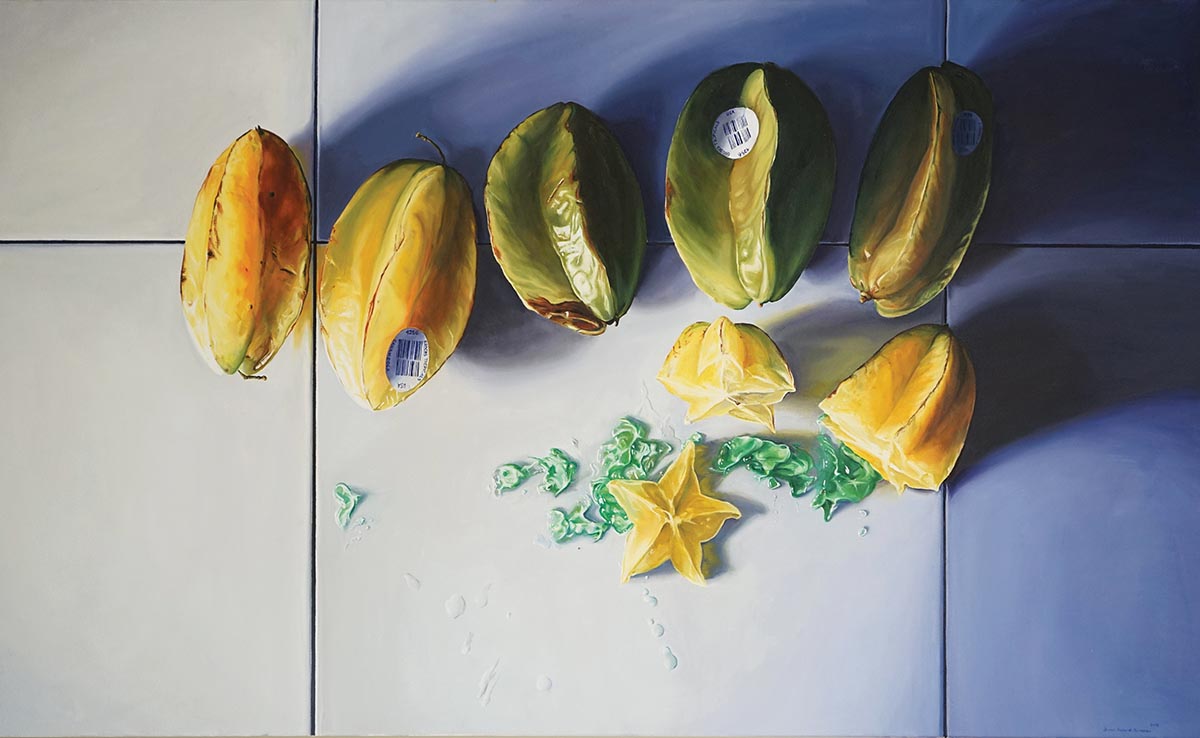 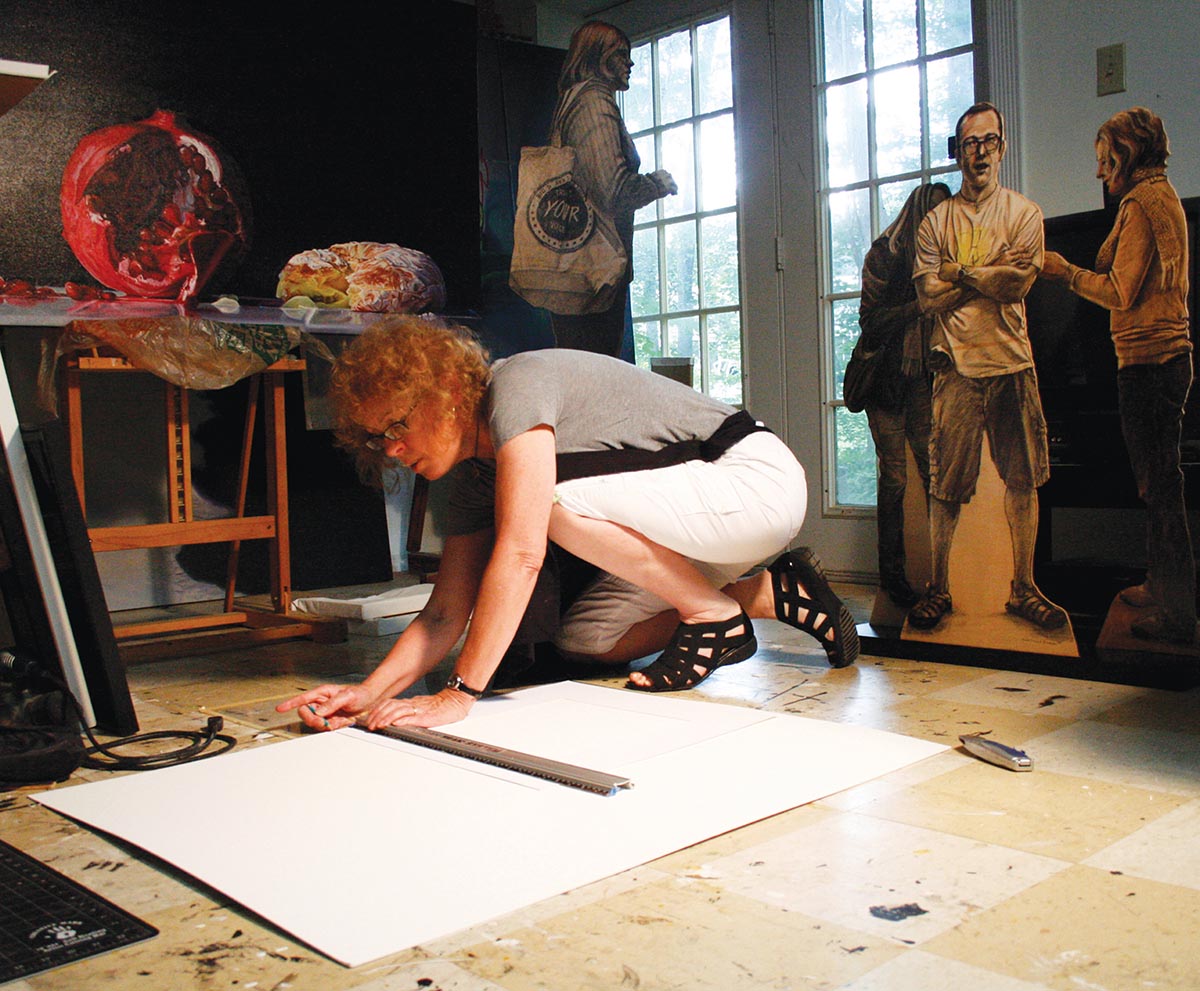 Denise Stewart-Sanabria in her studio 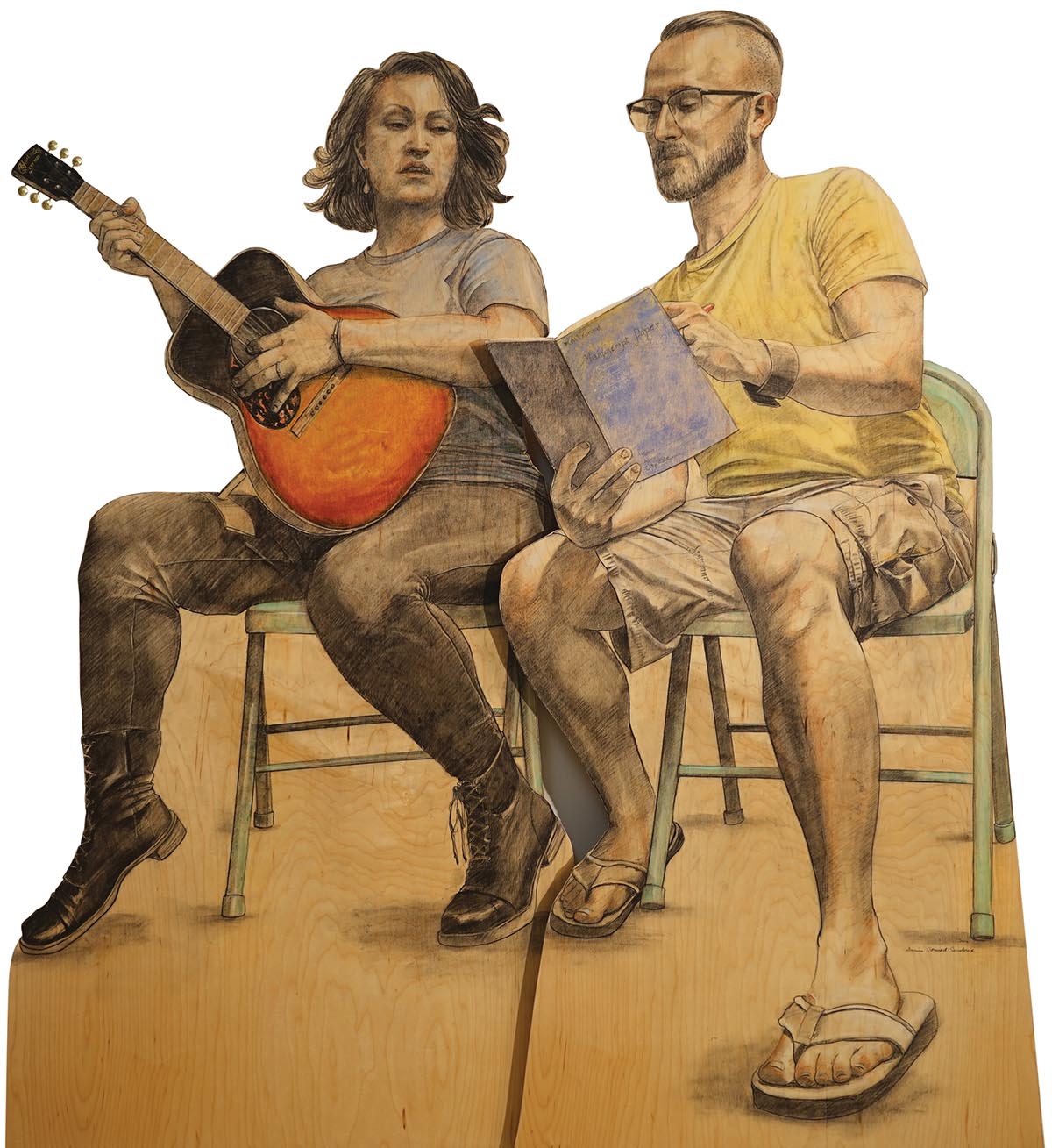