Joseph “doughjoe” Love, III is an active participant in Norf Art Collective, a team of creative artists working to impact the North Nashville community as well as Metropolitan Nashville through the arts. Through mural projects, art exhibitions, and social events, Norf members address social issues as well as the unique and historical aspects of various neighborhoods. As an advocate for the North Nashville community, doughjoe is a member of a team that organized the Jefferson Street Community Health Fair and the monthly Jefferson Street Art Crawl. In addition to his communal work, doughjoe also channels his creative energy into the production of ballpoint-pen drawings that speak to contemporary social and political issues, which he displays in group art exhibitions. 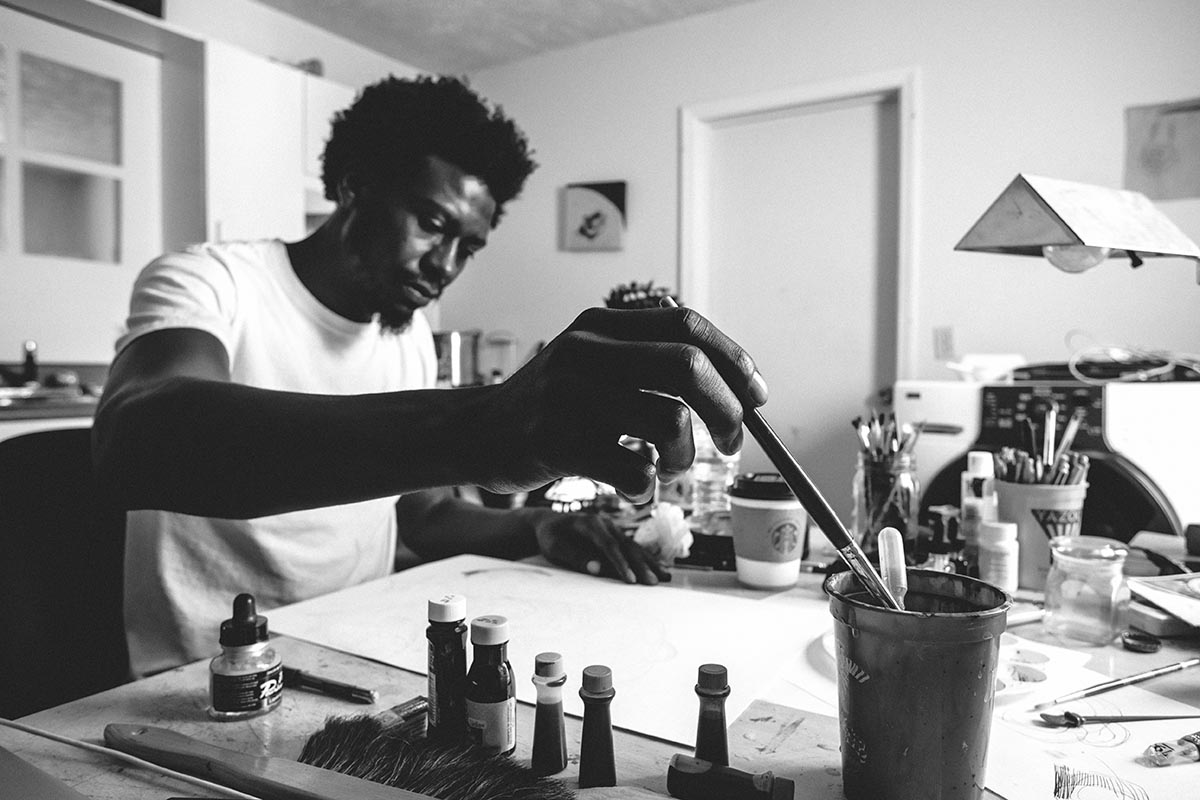 doughjoe in his studio ;Photograph by Keep3

Doughjoe’s commitment to Norf resulted in the creation of several murals he produced, along with a group of graffiti artists and muralists, in North Nashville on Herman Street and 18th Avenue near the historic campus of Fisk University in 2015. In October of last year, he assisted in the organization of a day-long festival of music, poetry, and visual art sponsored by the Norf Wall Fest project. This festival included an exhibition, juried by Nashville-based artist and community activist Thaxton Waters, which displayed doughjoe’s artwork alongside fellow artists Brandon Donahue, Jamond Bullock, Jay Jenkins (also known as Woke3), Michael Mucker, and Tennessee State University art professor Sam Dunson.

Doughjoe’s recent drawings are visually united by his use of ballpoint ink with fluid washes of color and through his focus on the human figure. The thematic focal point of his work centers on topics such as the prevalence of gun culture in America, the elevation of African American cultural heroes from history, and racism in the USA. In Ms. June, the figure embraces a rifle barrel with one hand and appears to stroke the handle—like a guitarist—with her right hand. Her ecstatic expression speaks to a type of love affair with guns. In contrast, the male figure in Slick, with his gold-plated handgun, suggests the self-destructive power of weapons. Recently doughjoe was invited to create a work of art centering on gun violence for a group exhibition, External Ballistics: A Show about Guns, organized by and shown at Julia Martin Gallery. 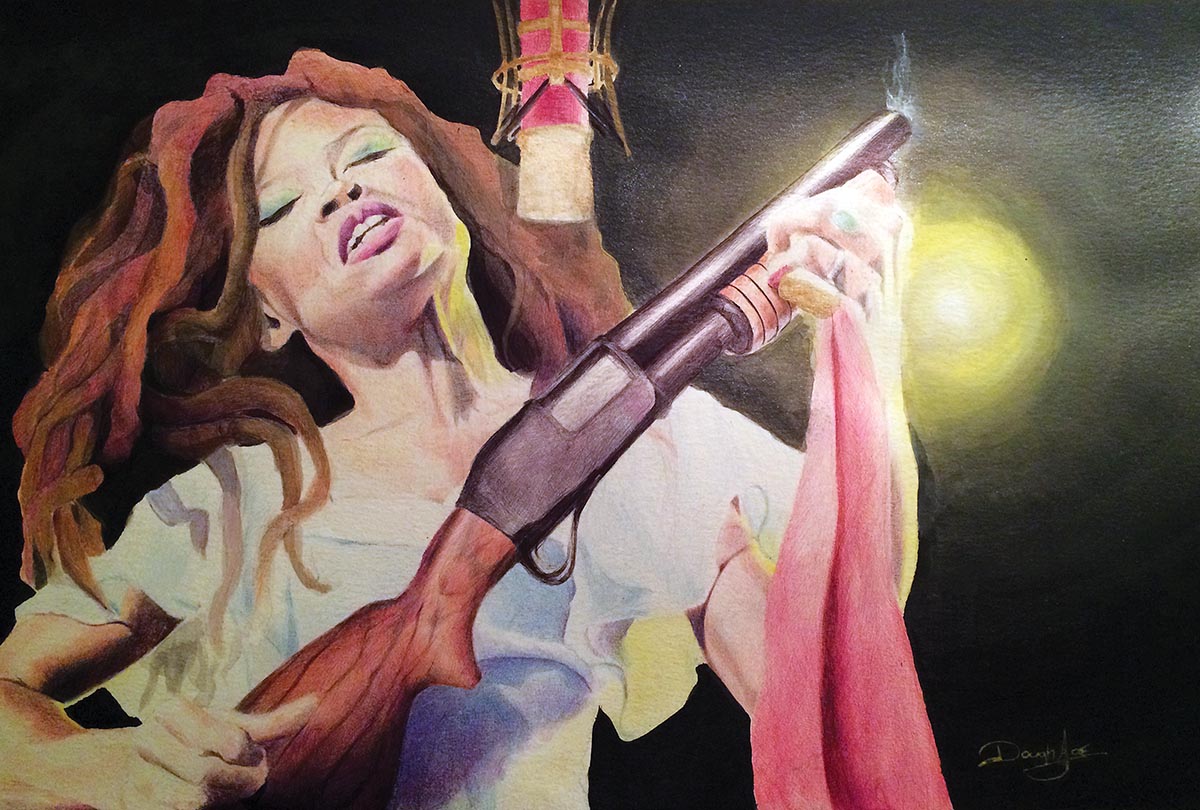 Doughjoe has stated that he lacks formal training in art; however, through independent study he is constantly searching for knowledge about art techniques and the history of art. He acknowledges that he has been influenced by the paintings of twentieth-century Spanish artist Salvador Dali as well as by African American illustrator Ernie Barnes. The elongated black human figures that appear in Barnes’s painted illustrations (that adorned music album covers of the 1970s) are stylistically connected to many of the people that appear in doughjoe’s mural paintings and drawings. For example, Barnes’s inspiration is evident in the abstract dancing female in Mercury and the male figure found in Depiction of BadAzz.

Another artistic role model is Greg Ridley, whose copper repoussé panels that chart the history of Nashville (located at the main branch of the Nashville public library) and the history of Fisk University (located on the campus at the Carl Van Vechten Gallery of Fine Arts and the University library) are connected to doughjoe in terms of style and theme. Ridley was also an advocate for social and political issues as expressed through the visual arts and which is relevant to doughjoe’s artistic vision. And doughjoe has said that his passion for creating art is tied to his interest in science, as both emerged during his college days at the University of Southern Indiana from which he received a Bachelor of Science degree in biology in 2008.

When the United States Department of the Treasury announced that the image of 19th-century abolitionist Harriet Tubman would appear on the ten-dollar bill alongside the first U.S. treasurer, Alexander Hamilton, many citizens were excited about the news that an African American historical figure would add some racial color to the U.S. currency beginning in 2020. In the meantime, doughjoe’s artwork Nina, a ballpoint-pen drawing rendered on a ten-dollar bill, is a reminder that American paper money has been dominated throughout history by portraits of mostly white male figures. Also, his work elevates the cultural contributions of Nina Simone, a 20th-century female African American singer, songwriter, and civil rights activist (like Tubman) in the present historical moment. Nina is from the paper-money series which illustrates doughjoe’s commitment to raising public awareness about the African American experience. 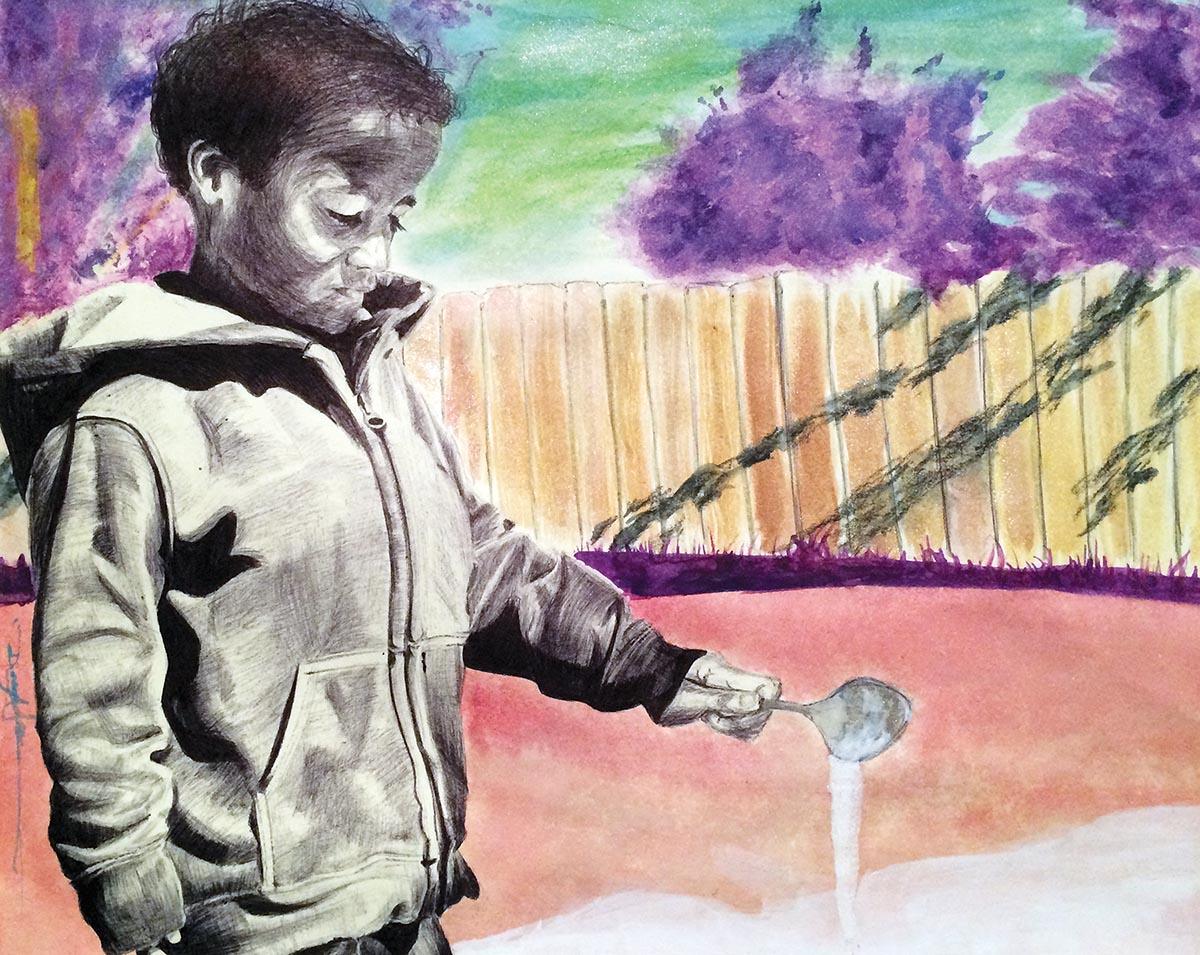 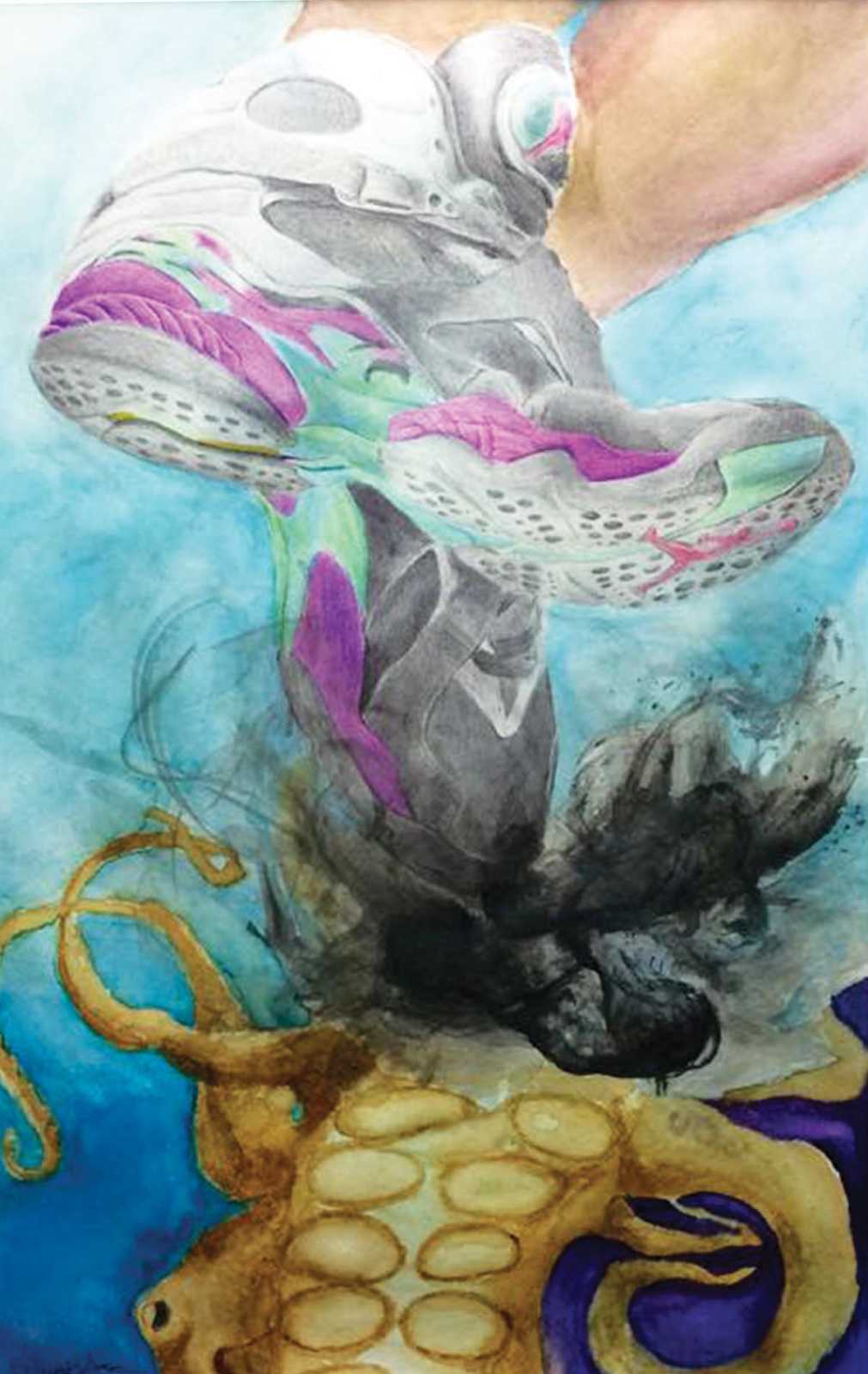