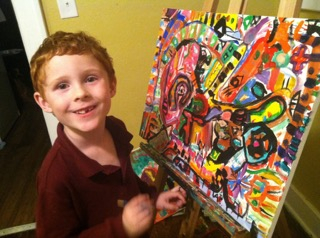 Aiden Percefull is hosting his first exhibition on Saturday, September 9th, at The Clay Lady Campus from 5-7PM. The show will center on the progression and evolution of Percefull’s growth as an artist over the past four years – from the beginning of his artistic ventures at age four to his current projects at age eight.

Percefull has been called “Little Picasso” since he began his marker sketches as a toddler before quickly progressing to acrylic paintings. Now, the eight-year-old artist boasts over 70 works of art, and has also completed commissioned work for Dawn Oberg’s CD titled “Bring” and The Music Health Alliance among others.

His first show will run from September 9th to September 30th, and limited editions posters as well as other products created by silkscreen artists Chris Sittell and Mary Helt of Maryink will be on sale. Giclee prints will be made to order and new works can be commissioned upon request. Read about his work before heading to his show on our website here.