On a coal-black night, danger tastes like diesel fumes mixed with the acrid stench of nitrate fertilizer. Out of the brush, three masked figures slip onto the tracks. They’re trespassing and putting their lives at risk in more ways than they can imagine. As the expression goes, “People don’t get hurt on the railroad; they get killed.” 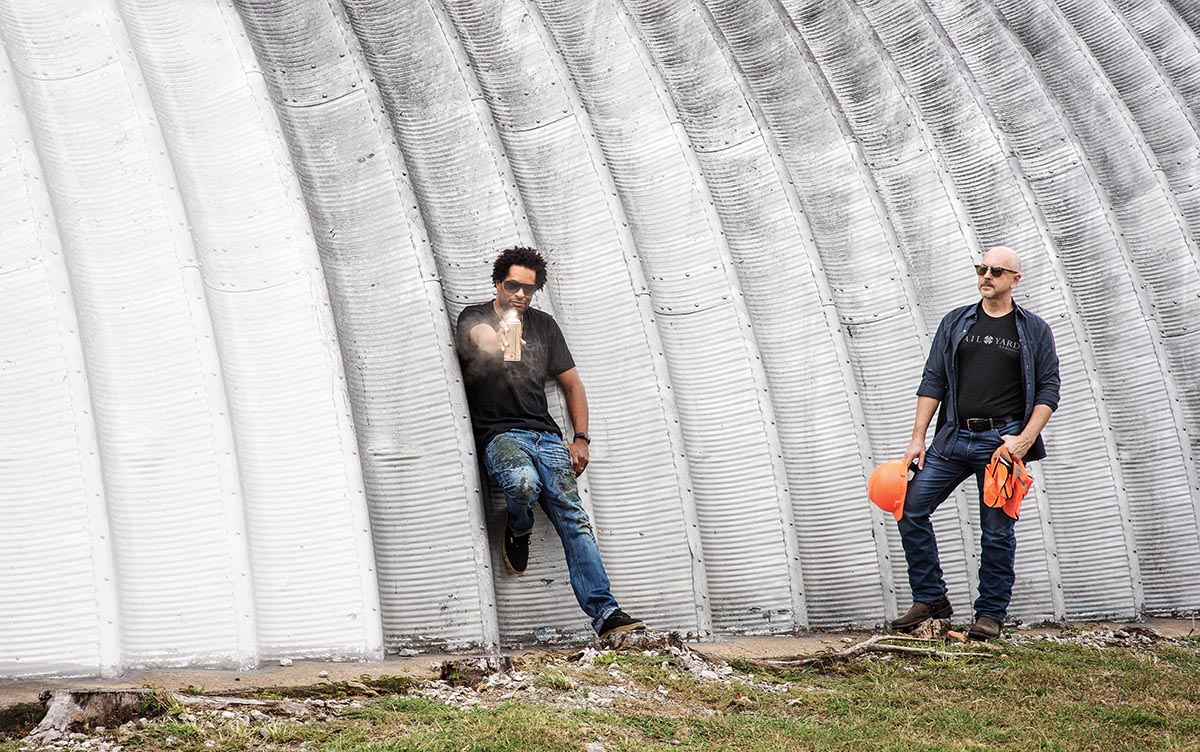 Police and railroad workers—people with a right to be there—are looking for them. They may be more forgiving than the thugs engaged in their own illicit activities.

Wafting fumes or the embers of a lit cigarette could betray their location. Retribution would be swift and violent.

Everyone is on edge.

They’re here to bomb a train. 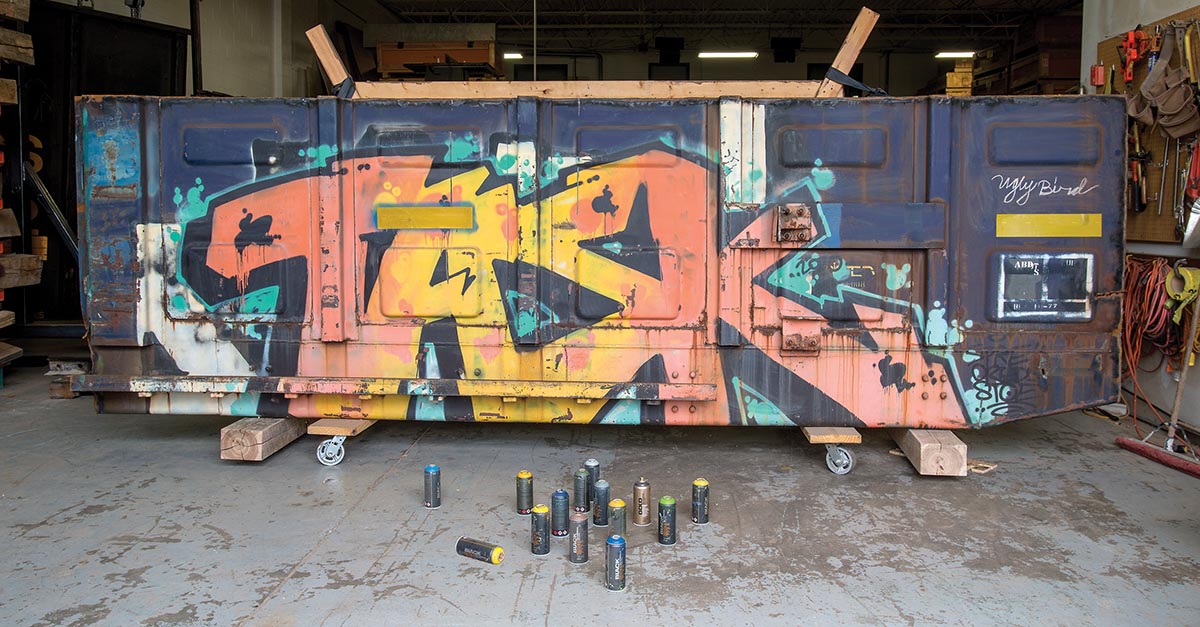 TASK by TASK, 2010, Harvested original graffiti from a boxcar

The upcoming exhibition at Rail Yard Studios, Project Boxcar, evolved from a team effort. Troy Duff and I met when he moved back to Nashville from Los Angeles. Despite Duff’s background as a graffiti writer and mine as a railroader, we became unlikely friends. Pursuing an interest in exploring the incorporation of graffiti into my custom artisan tables, and with Duff’s assistance, we did just that. A couple of graffiti-covered tabletops developed into a whole new effort.

For Project Boxcar we gather burners, original works of vandalism that have traveled thousands of miles on the rails. Composed under cover of night, by artists high on adrenaline for fear of discovery and subjected to challenging weather conditions, freight art possesses a raw, uninhibited, and imperfect character.

History credits a young Philadelphia man named CORNBREAD as the first graffiti writer in the 1960s, but it was kids like TAKI183, STAYHIGH149, and TRACY168 that experts cite among the first to tag subway cars.

The numerals at the end of their names stood for 183rd, 149th and 168th Streets—all in the heart of the Bronx—an urban wasteland of vacant lots, abandoned buildings, gangs, and lost hope in the 1970s. After tagging a car, the young vandals would seek out a nearby bench, thereby forever linking the term benching to the spectator aspect of graffiti.

Then in 1985, New York declared war on graffiti in what would come to be known as The Buff. It took until 1989 for city officials to declare the metro train system graffiti-free after countless dollars spent enforcing the struggle.

That led writers to take their art to the rails of the neighboring freight yards, where they sought out burners, or cars that would travel long distances across the country. Many early purists of the graffiti movement look down their noses at freight writers as less daring, but the danger remains high.

We’ve started doing what we call harvesting—selecting, marking, and preserving pieces of graffiti from railcars headed for scrap. An act of historic preservation to some generates controversy among some in the graffiti world, however.

Graffiti artists typically object to the harvesting of their work. They argue the importance of viewing their work in the context of where it was made and that the temporary nature defines the art. We understand and empathize but disagree when it comes to what we are doing with Project Boxcar. Either we harvest it or it’s scrap metal within twenty-four hours. We provide a last-minute reprieve from death row.

Duff boasts, “For thirty years, the railroad has wiped it off, painted it over, or sent it to scrap. They’ve destroyed some stunning artwork, but they’ve failed to stop the artistic bombing of trains.” From my standpoint, if those vandals don’t like harvesting, maybe we’ve found a way for the railroads to return fire in this war. 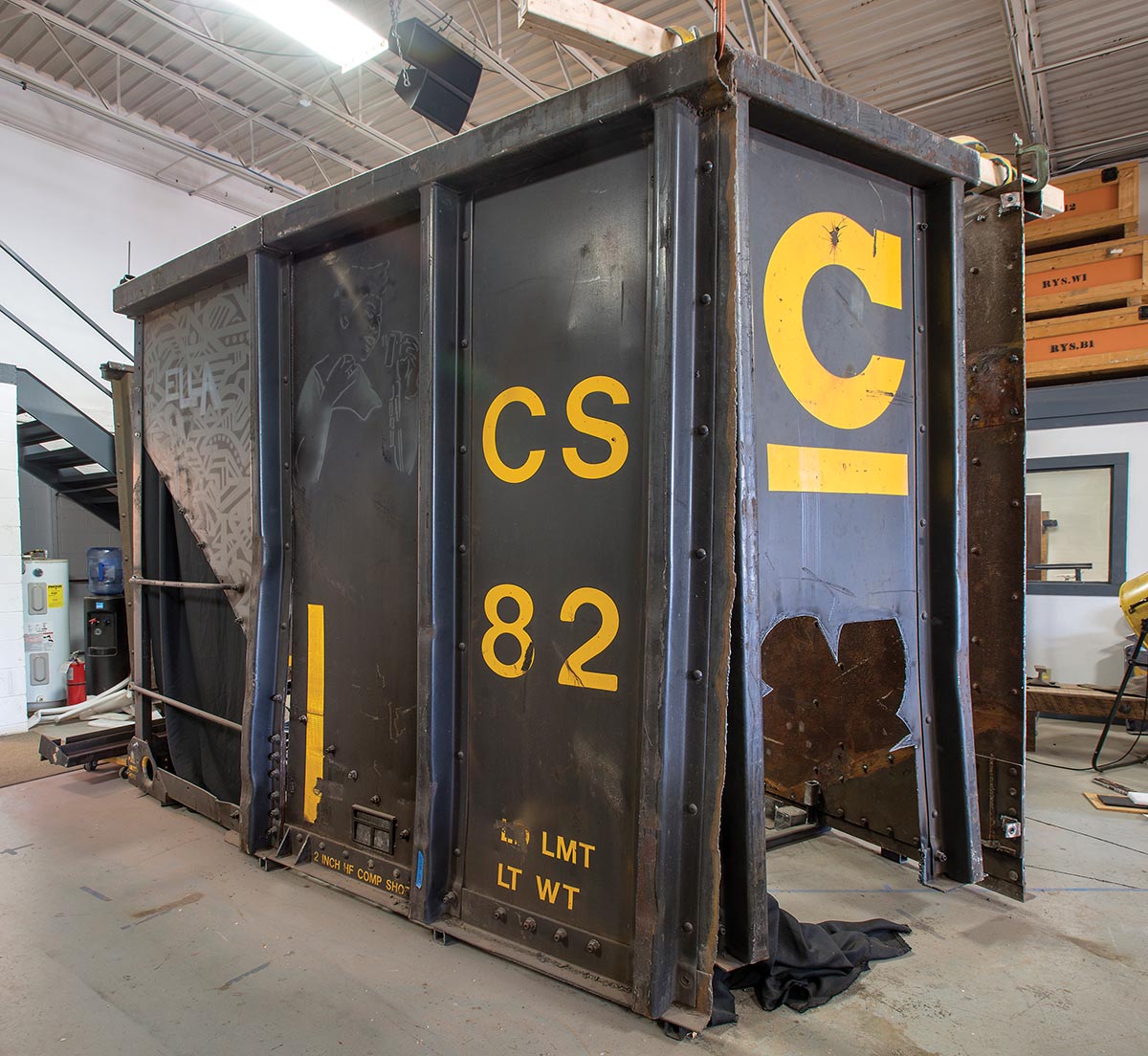 Anarchistic by nature, the graffiti culture breeds contradiction and controversy including inner conflict over whether to preserve or not. In Saving Banksy, graffiti artist Ben Eine says he wouldn’t want his work harvested, then reflects a second before admitting that two hundred years from now, he’d like to know that some of his work still existed. On the popular “Legends Thursday” podcasts, modern graffiti artists are prone to swoon over older writers’ work that they see while out benching and the importance of preserving it.

It’s a fact; graffiti stands as the first significant art movement since Pop Art. Through Project Boxcar, we’re preserving freight graffiti before it’s destroyed. My role is to establish provenance by uncovering it and putting it in the context of the graffiti movement. Every piece in this exhibition has a story. Project Boxcar showcases examples of three basic types of written graffiti: tags, throwies, and pieces.

Tags are a name scrawled in a single color in about three seconds. They occupy one or two square feet of blank space and serve to test a can of paint or establish/promote an artist’s identity like a dog marking a tree. The piece from BONK, a Baltimore-based artist, exemplifies this style, and it sports a halo and underline embellishment common among graffiti artists.

“For thirty years, the railroad has wiped it off, painted it over, or sent it to scrap. They’ve destroyed some stunning artwork, but they’ve failed to stop the artistic bombing of trains.”

Just as hobos will mark a car, graffiti artists will tag with white oil bar like The Tesla Kid and BETOR monikers we harvested. The BETOR tag has a local connection to writer Ronald “Ronnie” Bobal who passed away in December of 2016.

Throwies or throw-ups take a bit longer. They generally consist of two colors—often balloon letters composed of a light color outlining the word and then filled with a dark color on top to define the letters.

Exploding in color and style, masterpieces (or pieces among the initiated) can cover anything from an entire rail car down to just a few square feet of space. TASK, one of the largest harvested masterpieces in Project Boxcar, legibly spells out the artist’s name in bold peach and yellow hues. The piece incorporates elements of a comic book action accent like POW! or BAM! I tracked down the artist and learned that TASK executed it on a rainy day, thus explaining some of the runs in the paint that lend the piece character.

Getting up close and personal with the work makes the Project Boxcar exhibit compelling. Viewed at a distance, the harvested works have a tight, finished look. Moving in, the lines fade to soft edges with paint runs, inadequate paint coverage, and other gritty, rough imperfections.

For me, viewing the burners from three feet compares to looking up close at the works from the great Dutch painters. You can see the lines, like brush strokes in a Rembrandt or Van Gogh painting. 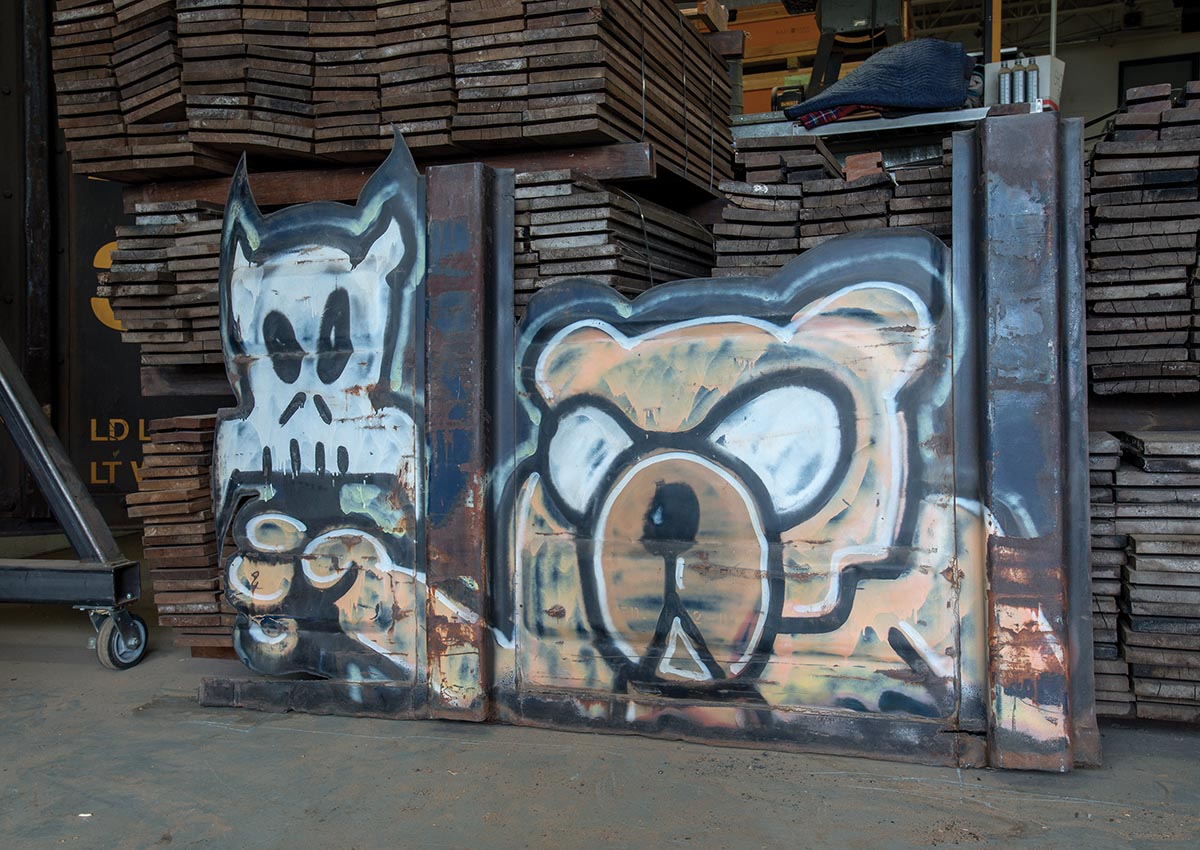 The exhibit places some of Duff’s carefully crafted work alongside the harvested sections of railcar graffiti. A writer for over 30 years, he represents one of the grandfathers of the local graffiti movement. Recently, Duff has been cultivating a new abstract design style that draws on the shapes and forms in his lettering. For this work, he has set aside his days of scrawling his moniker on a train or two while growing up in 1980s Nashville. The difference in style between the burners and Duff’s contemporary work is striking, and it’s no wonder that many artists view their freight writing as sketches, or as practice for a larger purpose.

Robert Hendrick founded Rail Yard Studios as well as multiple technology and healthcare IT startups. With an undergraduate degree in Industrial Design and an MFA from The Ohio State University, he has a passion for both art and design. An avid traveler, he worked and studied in both Europe and Australia.