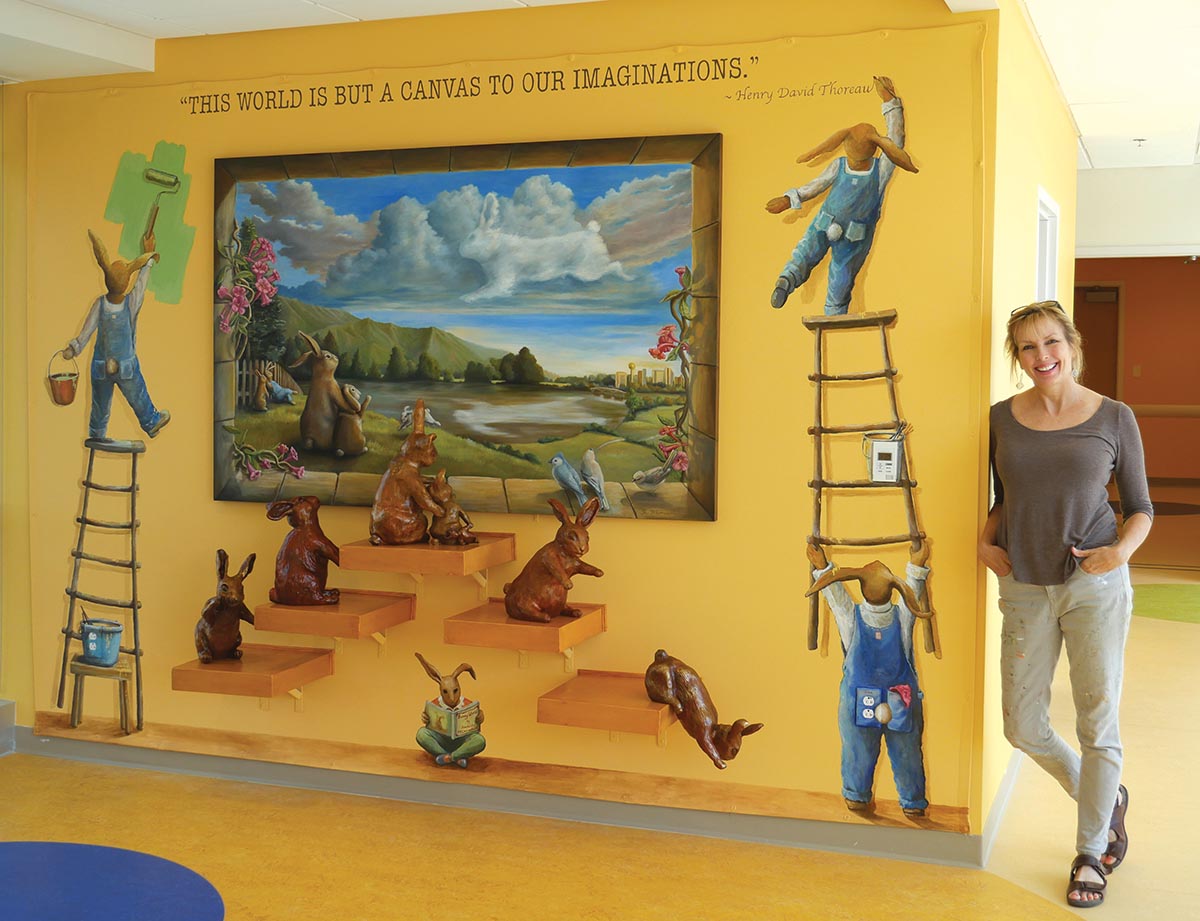 Rachael McCampbell beside her installation; Photograph by Curtis Stewart

Sometimes as an artist I wonder, Why am I doing this? Does it mean anything to anyone other than me? In January, I submitted a proposal to the East Tennessee Children’s Hospital in Knoxville, (ETCH), for a public art project. The thought of creating art for parents and children who are dealing with frightening illnesses inspired me. If I could make my art ease someone’s worried mind, even for a few minutes, that would mean a great deal to me. I presented three proposals to the committee, and they chose the one I call Bunny World. 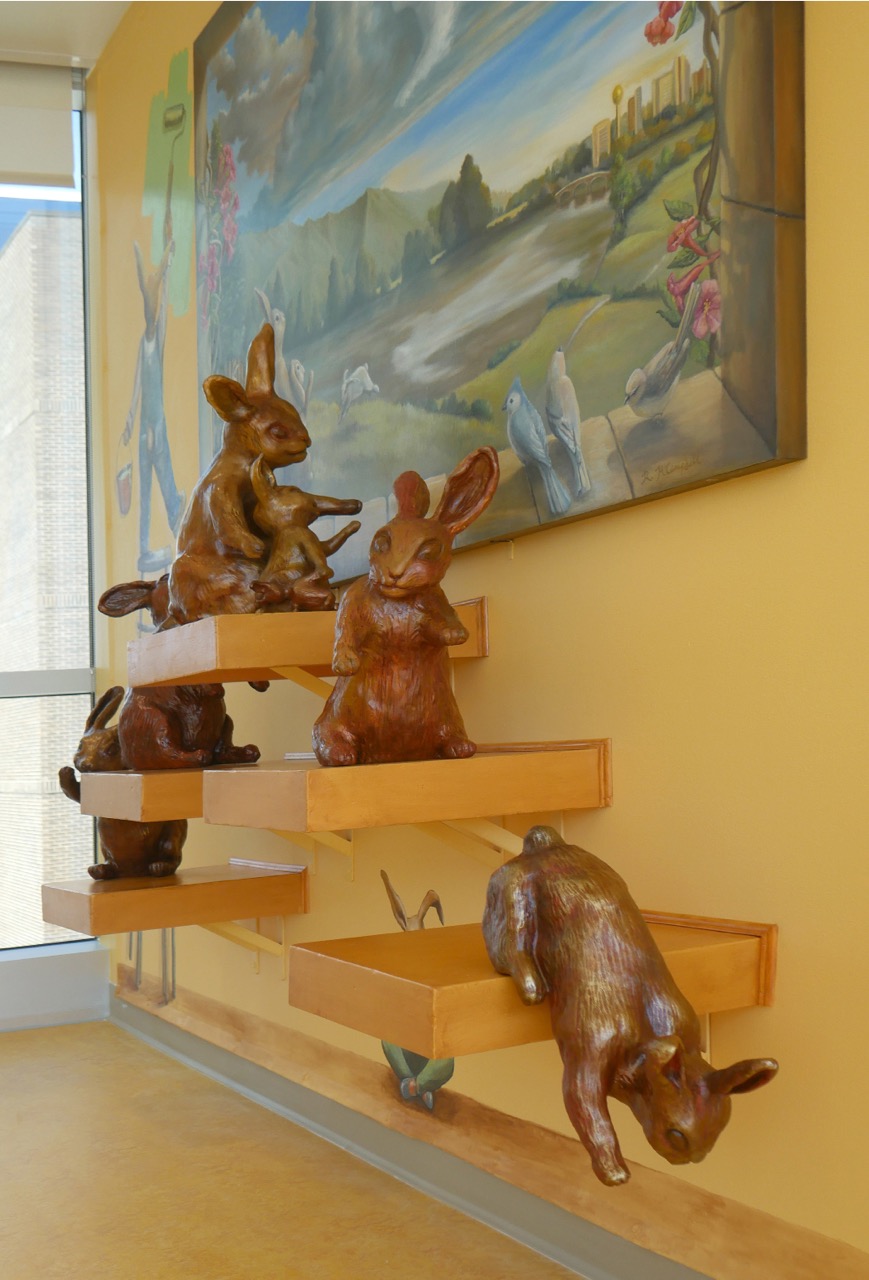 My idea began with a painting I sold of a bunny looking up at a cloud shaped like a bunny. It was whimsical, and it was that whimsy I wanted to capture. I designed a 4’ x 6’ panel, which acts as a “window” on the hospital wall. It looks out onto a field of bunnies who are observing a large bunny-shaped cloud in the sky and lake. To create context, I added the Smoky Mountains and the Knoxville skyline. And for more interest and depth, I sculpted bunnies who are climbing steps to peer at the bunny cloud, too. Bookending each side, overall-clad bunnies are busy painting the wall and Henry David Thoreau’s quote that reads, This world is but a canvas to our imaginations.

I was given a 9’ x 12’ wall in the hematology/oncology waiting room. Designing art for a hospital environment presents interesting challenges. It took months to find a huge piece of canvas that would cover the entire wall so that if they want to move it, they can. I stretched it on the wall, then gessoed and painted it on-site. It took me over a week to paint the “painter bunnies,” and the 4’ x 6’ panel took several months to complete in my studio. 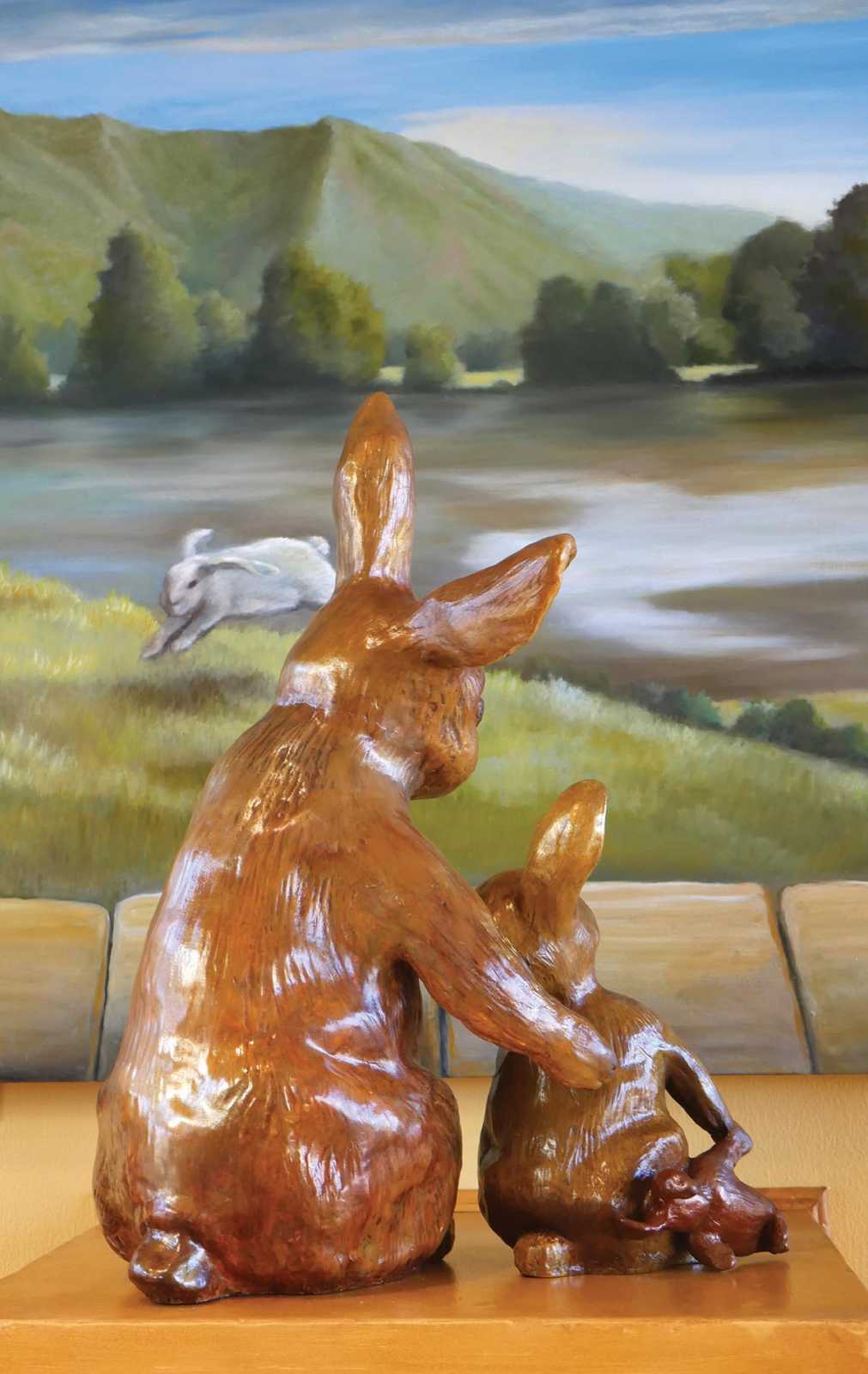 When I wasn’t painting, I was sculpting six bunnies out of clay and had them cast in resin. There were many hiccups with that process. We cast one bunny in a pastel color to match the hospital scheme but saw that they needed to coordinate with the painting. So I hand-painted each bunny using acrylics and metallic paints to create the illusion of bronze.

While I was there painting and installing, I talked to some of the patients, their families, and the amazing staff of ETCH. Their growing enthusiasm about the project got me more and more excited to be a part of it. I’m used to painting alone in my studio, so to hear their thoughts and feelings about my work, as I was creating it, was amazing.

One sweet little girl, who looked to be about 8, sat quietly in front of the art for a few minutes in her wheelchair. She was pale, her head bald from chemotherapy, yet she had a beatific smile on her face. She noticed the bunny cloud and the city of Knoxville, and before she left, she looked sincerely at me and said, “Thank you.” I was deeply touched that a child going through a serious illness took the time to consider the art, let alone appreciate my efforts. I knew then that my wish to create art that mattered had come true with at least one person. And one is good enough for me. Since then, I’ve heard from ETCH that my art installation has created conversation and wonder by many who see it. I can only hope that Bunny World, as Thoreau says, is … a canvas to our imaginations and a salve to the heavy hearts that pass through.