Although the First World War has not left as prominent a mark on the cultural consciousness of the United States as it has on the European nations that were combatants, its legacy is still deeply embedded in the fabric of this country. Exhibitions, events, articles, and books debuting during the 2017–2018 centenary are providing opportunities to bring these threads into focus. World War I and American Art, at the Frist Center for the Visual Arts from October 6 to January 21, does just that. The exhibition organized by the Pennsylvania Academy of Fine Arts is, in the words of Frist curator Trinita Kennedy, “the most ambitious exhibition yet attempting to survey the connection between American Art and the First World War. The organizers have convincingly argued that this war was just as influential for modern art as the Armory show of 1913.” 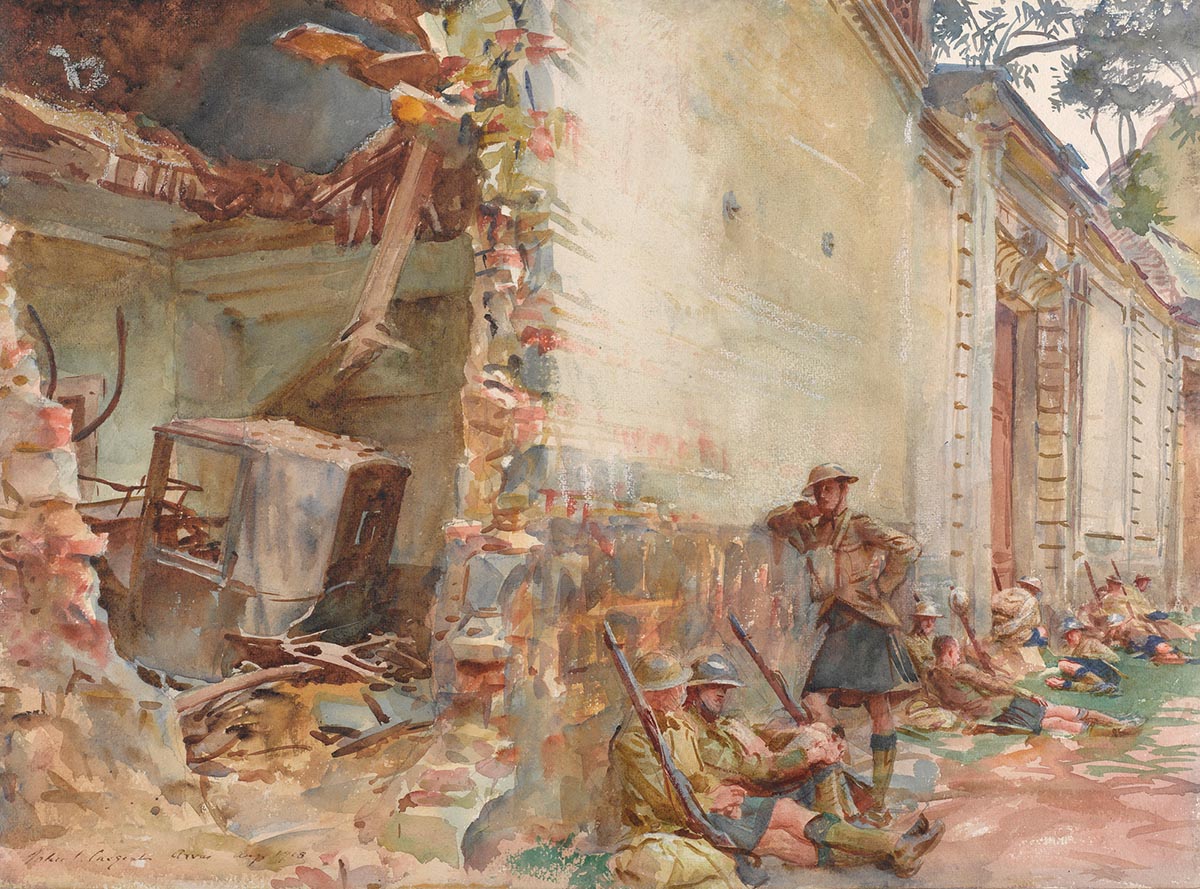 The buildup to World War I is often told as the story of a multinational arms race, itself a product of the fast- paced growth in mechanized technology at the end of the nineteenth and beginning of the twentieth century. Parallel to how modernization scaled up the sizes of cities and companies, it scaled up the size of warfare, now targeting entire societies rather than just armies. This was the inaugural experience of modern total war for Europe and the United States, touching all layers of society, including art and artists.

An incredible range of art is included, visually spanning cubism, American impressionism, expressionism, photography, and illustration. The art’s purpose also runs the gamut. Of the field of battle, John Singer Sargent painted an “official” view; Claggett Wilson and Horace Pippin created expressive memories of their service, and Edward Steichen took aerial photographs to decipher the new science of camouflage, disruptive and obfuscating patterns which Charles Burchfield helped design. Great artists and illustrators of the day, including James Montgomery Flagg, Howard Chandler Christy, Edward Penfield, Joseph Pennell, Lorenzo Harris, and John Sloan, created scenes meant as mass advertising both for and against the war. Childe Hassam painted flags along city avenues in patriotic fervor, and other artists reflected on the folly of this war in the many years following. With several modernist artworks long thought to be largely removed from the conflict overseas, art historians have looked closer at the stories and work of Georgia O’Keeffe, John Marin, and Charles Burchfield, making new arguments about how the stresses of the war and some of its visually striking advances such as dazzle painting and aerial photography informed their work. 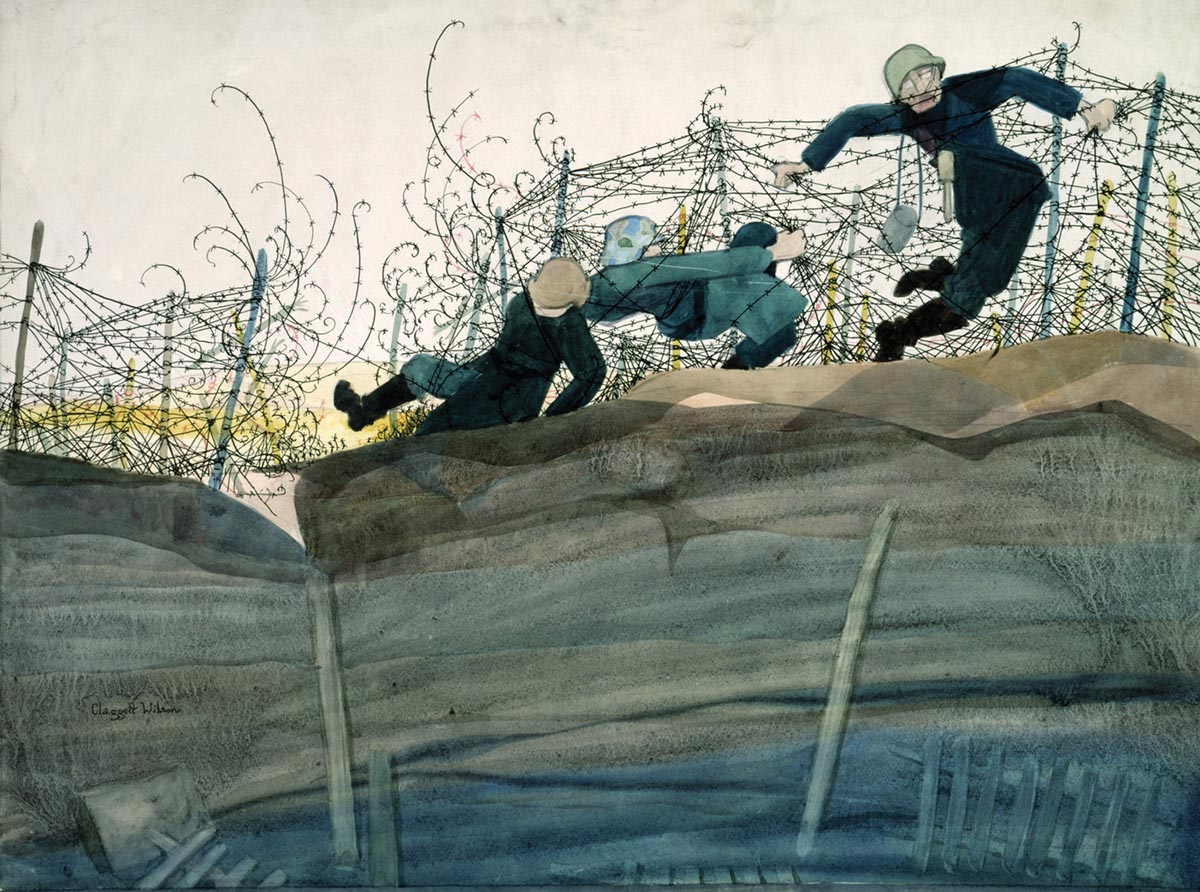 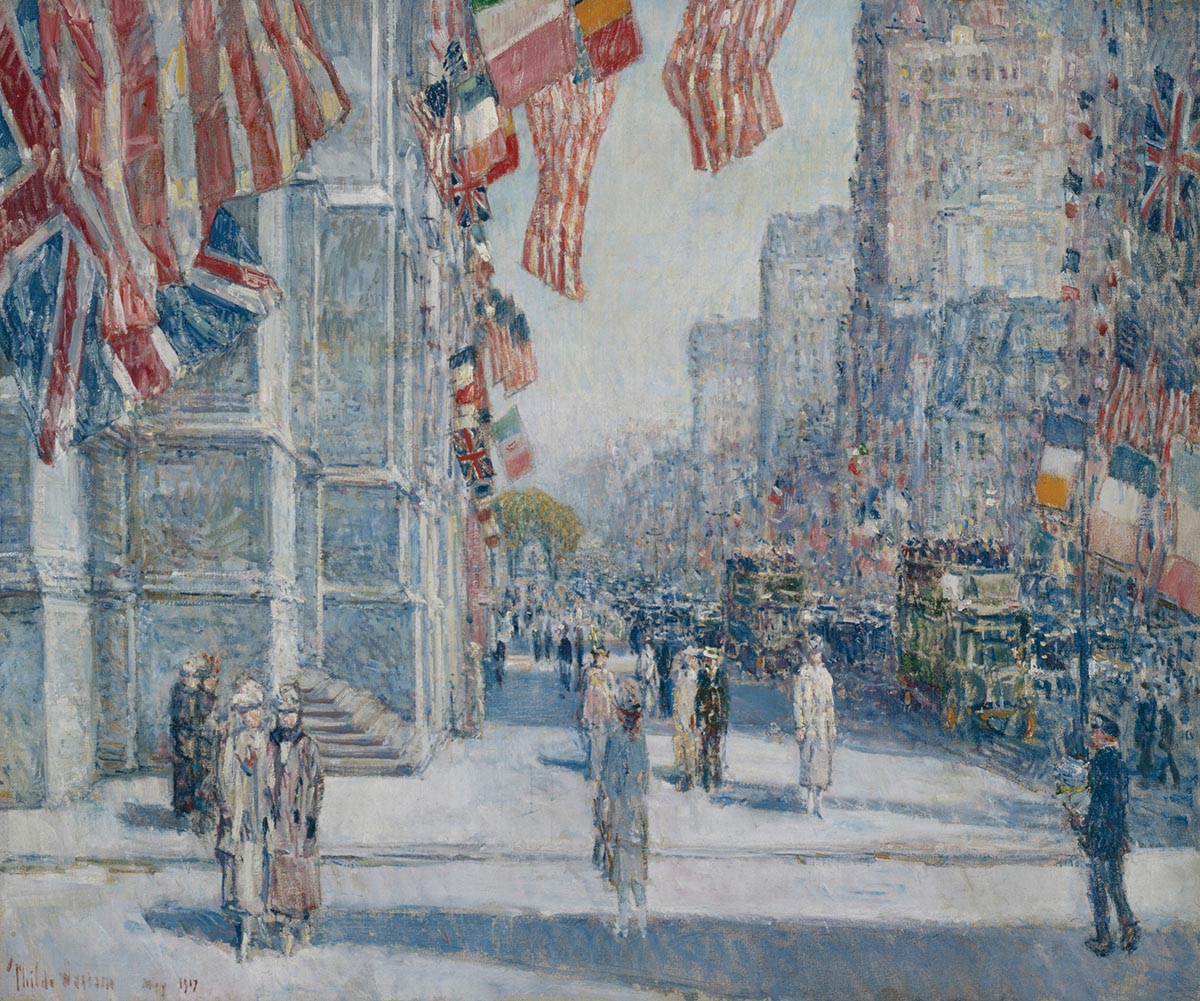 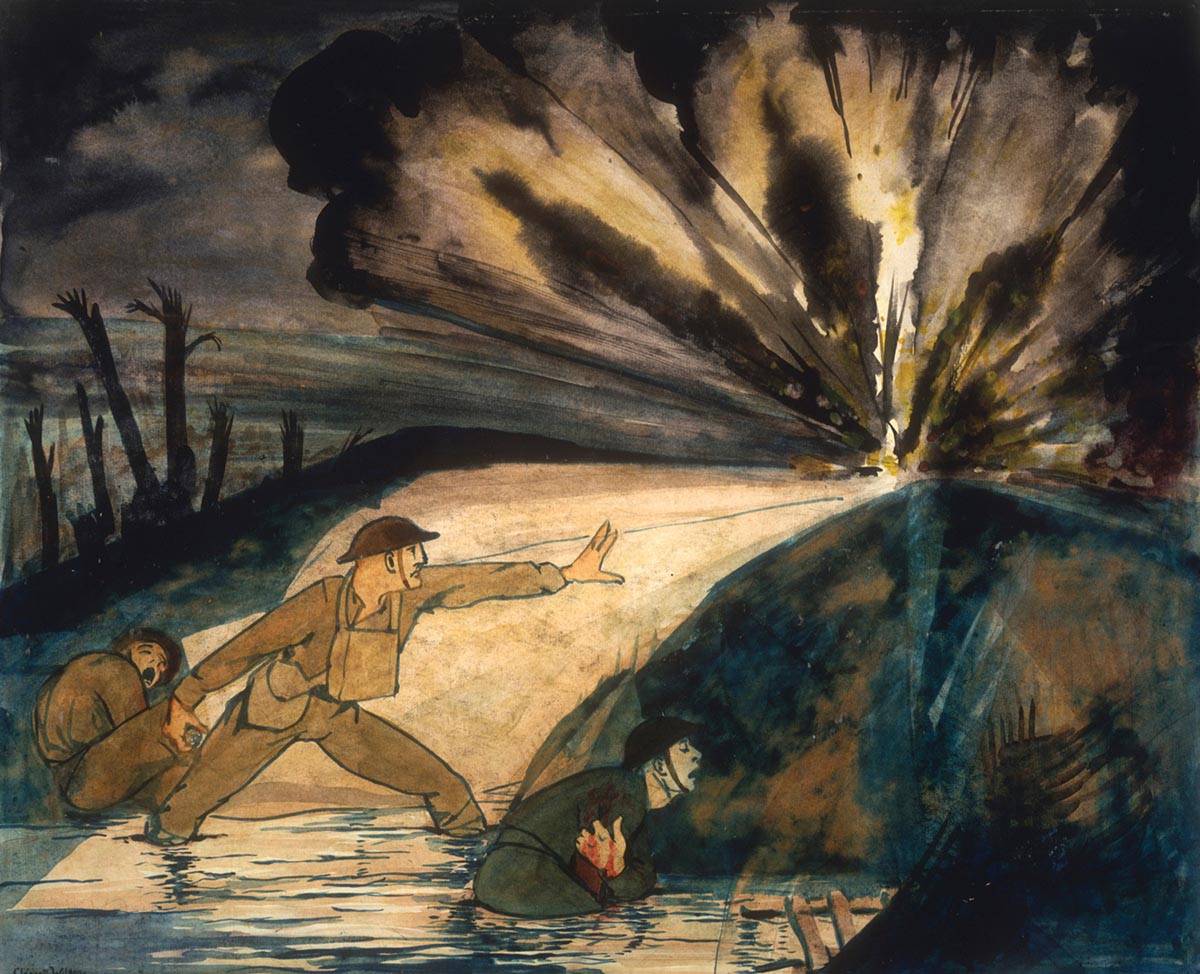 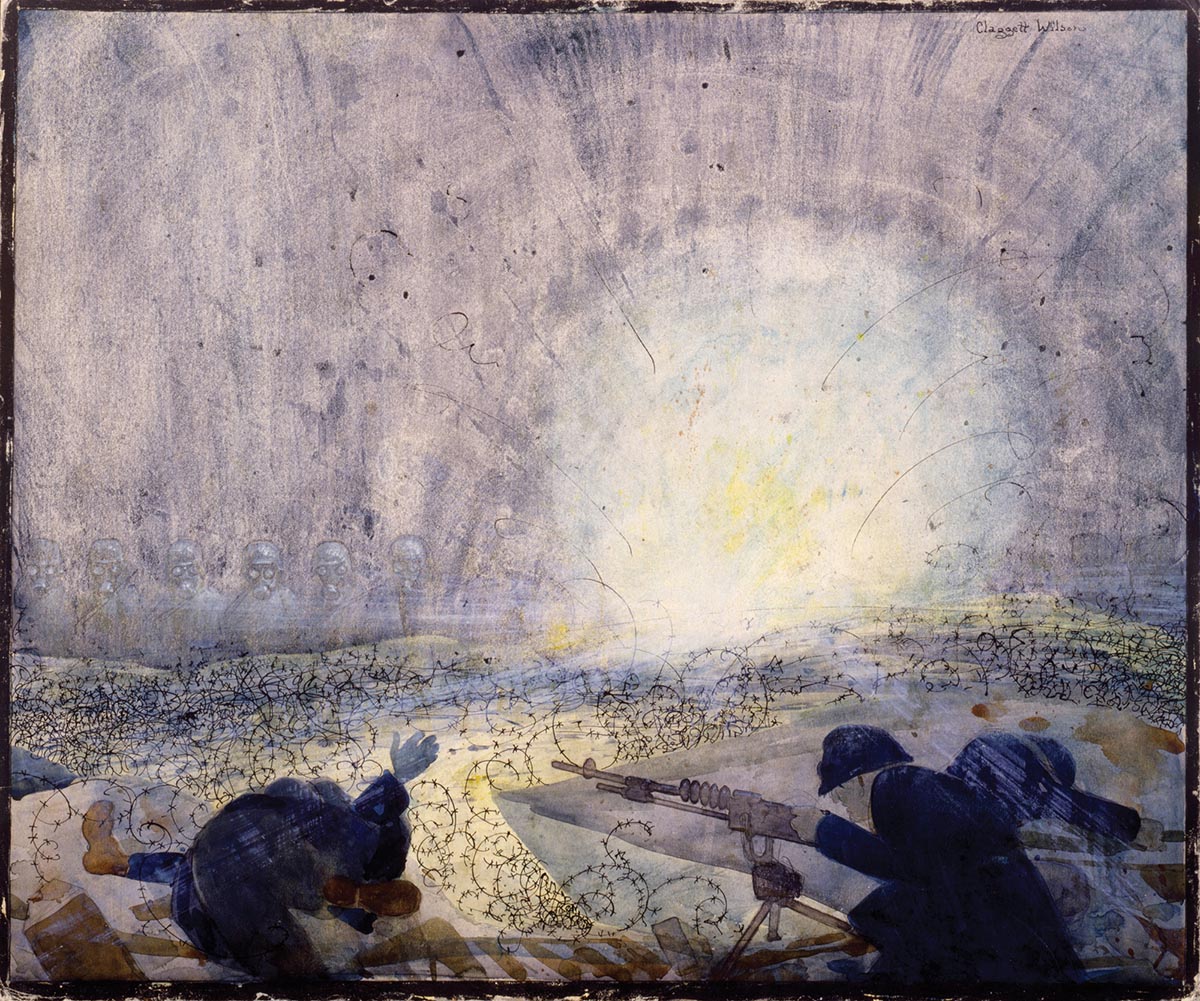 Kennedy reflected on the importance of the Pennsylvania Academy of Fine Art, one of this country’s oldest museums: “It has a long history of admitting women to its school, and the exhibition appropriately includes stories of women and African Americans.” In Gifford Beal’s On the Hudson at Newburgh, a young mother watches as troops, possibly including her husband, march off to duty. Several photographs document designs by Anna Coleman Ladd of masks covering the atrocious wounds inflicted by mechanized warfare, plastic surgery being one of many notable medical advances necessitated by the war. In Red Cross Work Room by Jane Peterson, we see one of the primary ways in which women actively contributed to the war effort—as nurses and canteen workers. And George Bellows’s The Murder of Edith Cavell features one of the primary German atrocities of the war: the execution of a young British nurse. This 1915 event, along with the sinking of the Lusitania, evoked in Fred Spear’s Enlist, became rallying cries for those Americans wishing to join the fight.

“This was the inaugural experience of modern total war for Europe and the United States, touching all layers of society, including art and artists.” 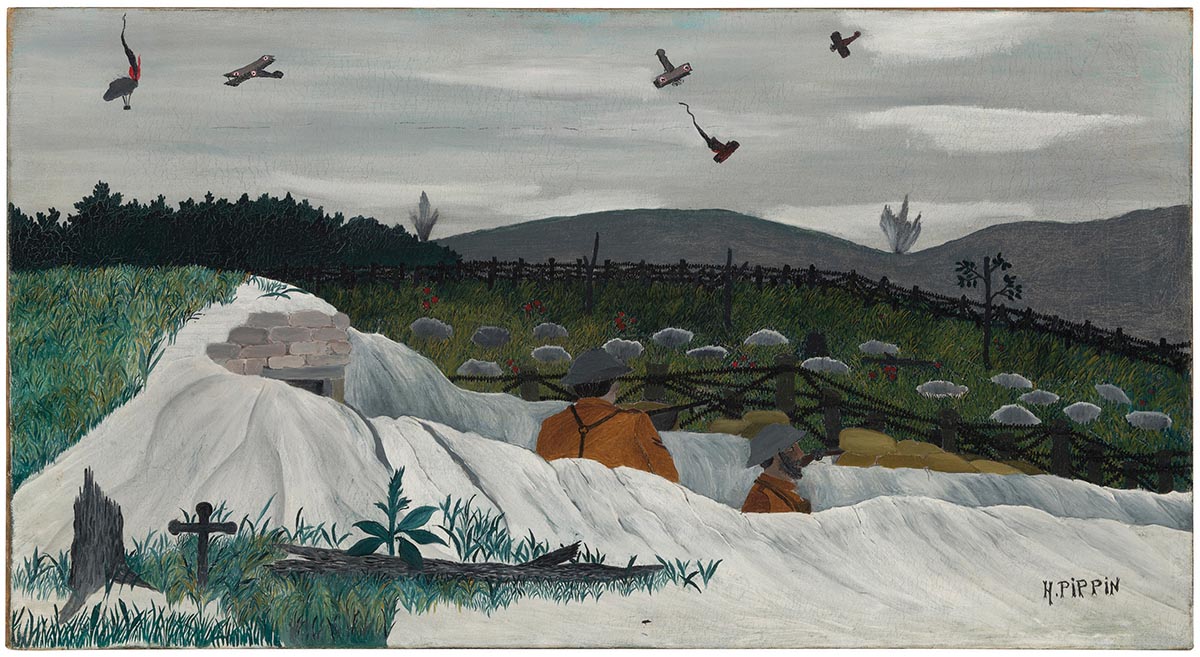 The African American experience is covered from a number of angles. Photographs taken after the war by Harlem Renaissance photographer James Van Der Zee show intimate portraits and regimental victory parades. Posters, a widely distributable medium, were created to celebrate the bravery and achievements of black regiments, most of which had been attached to the French armies, which had more progressive attitudes about race relations. There are several pieces by Horace Pippin, a Harlem Hellfighter severely injured at the Meuse-Argonne. As David Lubin argues in the exhibition catalogue, Pippin’s art showed realism in its way of telling the truth of his experiences and African Americans’ heroism, even if not visually mimicking reality. 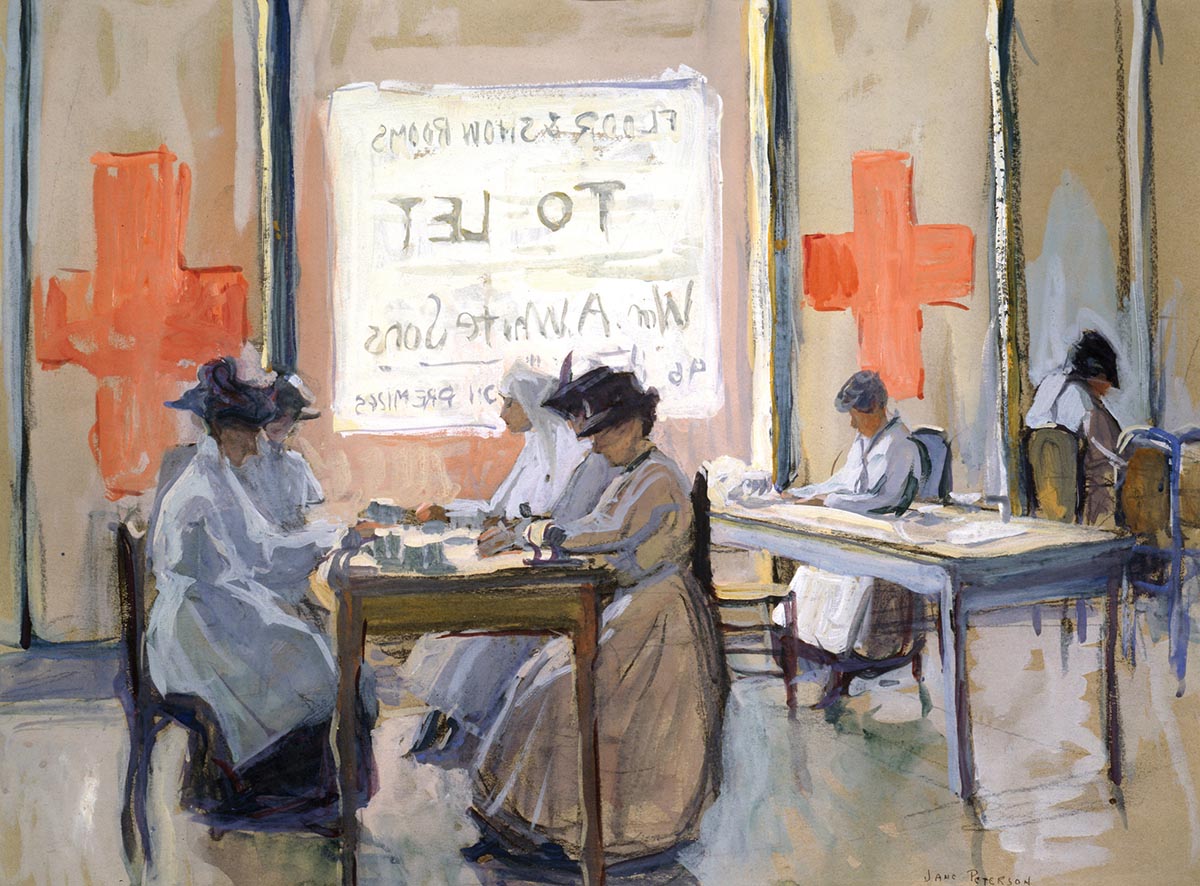 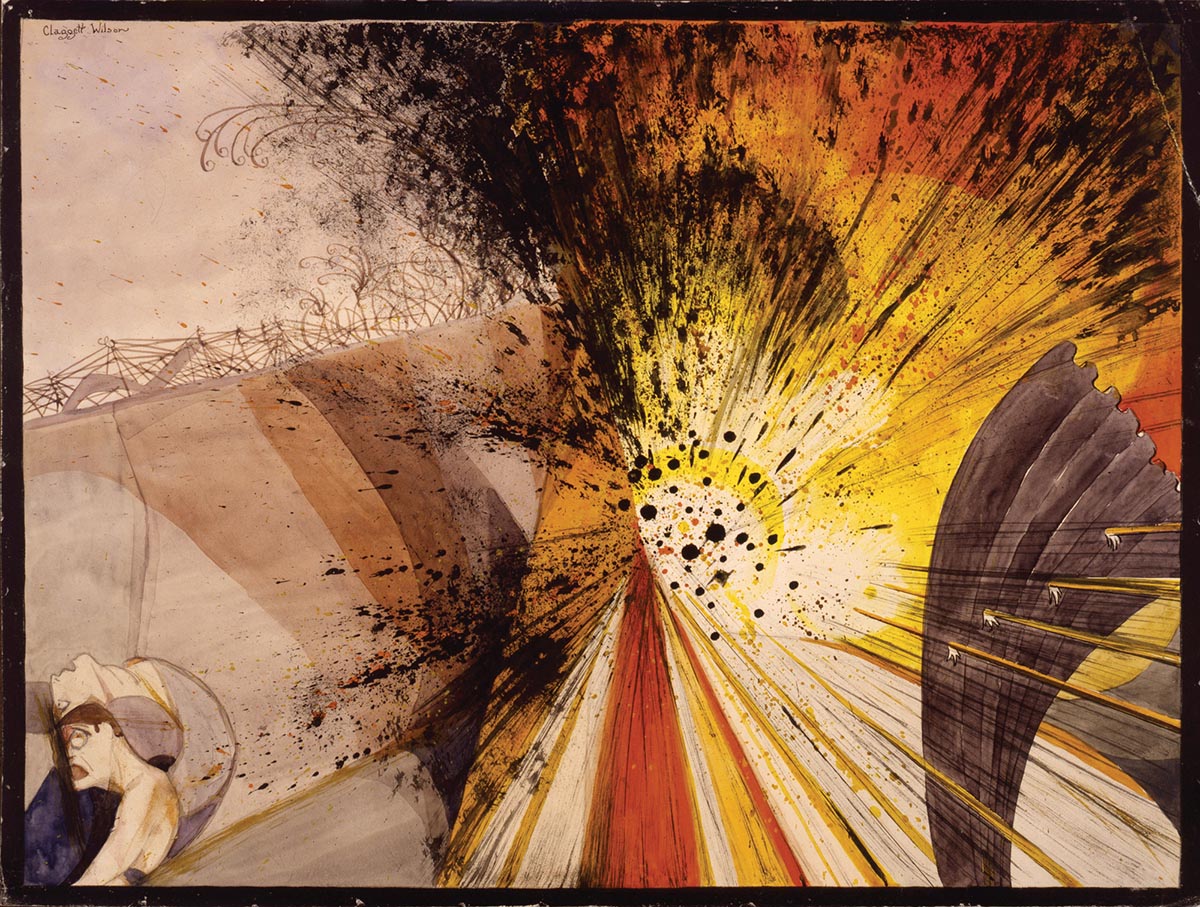 Claggett Wilson, Flower of Death—The Bursting of a Heavy Shell—Not as It Looks, but as It Feels and Sounds and Smells, 1919, Watercolor and pencil on paperboard, 17” x 22”

“This scene of the blind leading the blind is also a striking metaphor for physical and moral blindness, a biting commentary on the effects wrought by war.” 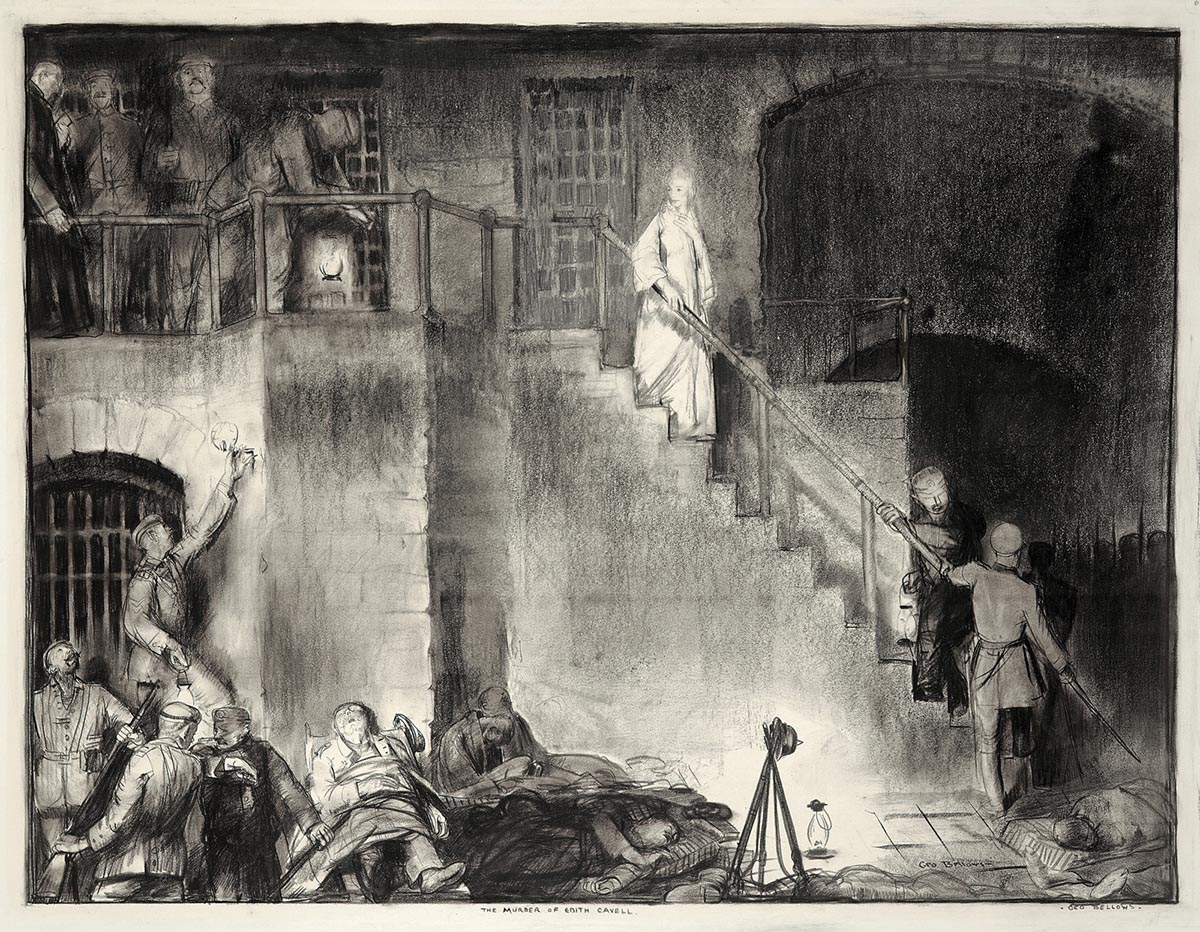 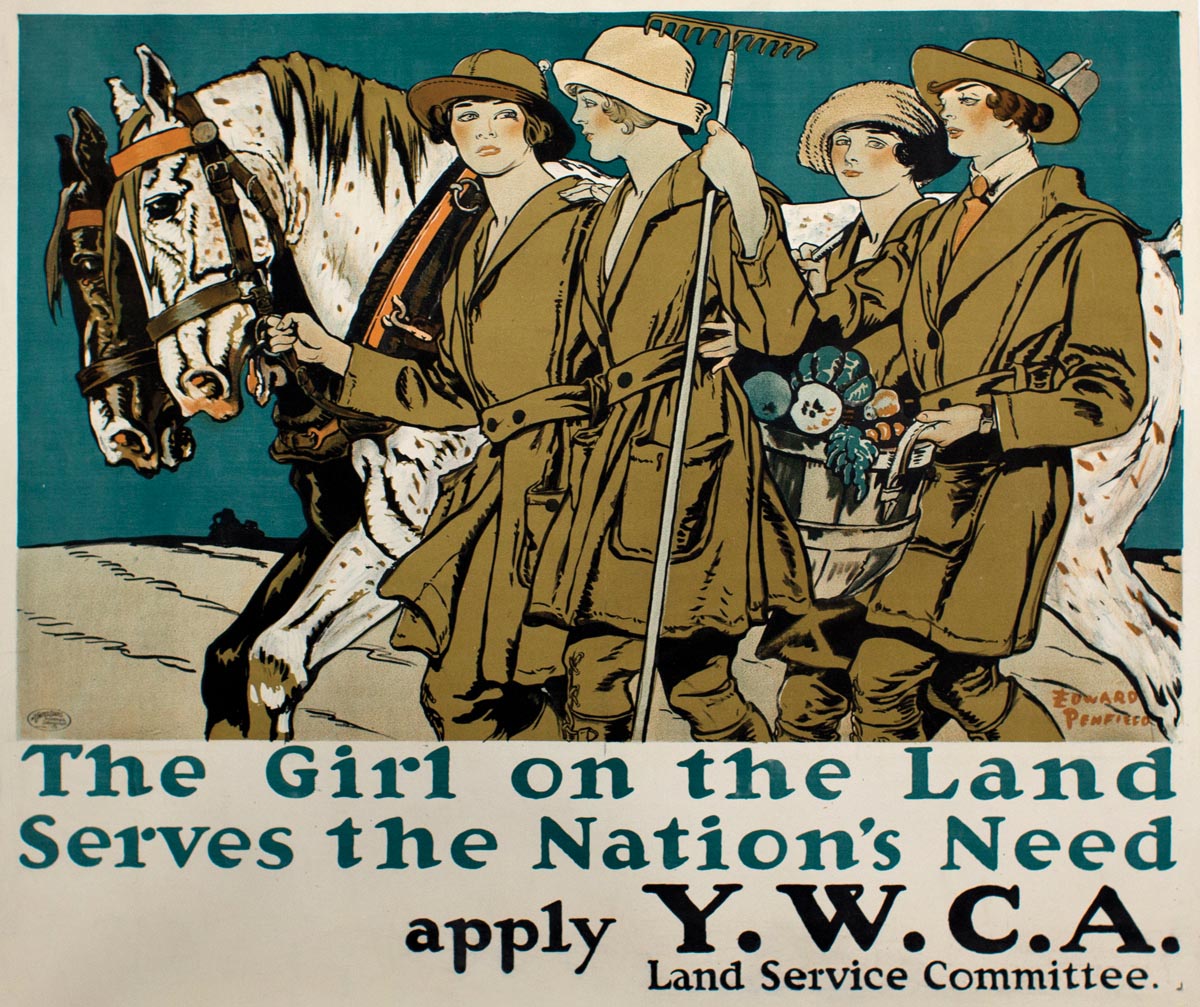 John Singer Sargent, by then in his sixties, was a reluctant recruit. He agreed to a British commission as a war artist in what turned out to be the final months of the conflict. The work of this American expatriate and painter of society is largely devoid of the devastating side of war, and yet the destruction of human life and property was unavoidable, peeking through the edges and backgrounds of these watercolors. An exception to this is Sargent’s masterpiece, Gassed. Normally housed in an intimate upper gallery of the Imperial War Museum, this is only the second time it has been loaned to the United States. Like so many Sargents, it is an elegant impressionist painting with a sense of nobility. But this scene of the blind leading the blind is also a striking metaphor for physical and moral blindness, a biting commentary on the effects wrought by war. It points to differences in expectations and reality. Gas was a notoriously fickle weapon, blowing with the wind, and this war, entered into with enthusiasm for a short fight, ended up leaving deep physical and psychological scars on the societies involved. David Lubin comments on how Gassed demonstrates the “elusive visibility of modern warfare, its stubborn refusal to accommodate familiar forms of representation.” This hidden nature was literal, as men dug more intricate networks of trenches and mimicked the dead trees and horses of no- man’s land to conceal lookouts and sniper posts, but it was also symbolically seen in lingering shell shock and population counts lacking young men.

Perhaps this “stubborn refusal” is why so many artists processed their experience of the war in artwork that eschewed traditional realism. As seen in paintings by Claggett Wilson, even the titles, such as Flower of Death – the Bursting of a Heavy Shell – Not as It Looks, but as It Feels and Sounds and Smells, are poetic and disjointed, pointing to how a true picture of experiencing World War I eluded the methods that had been known before. 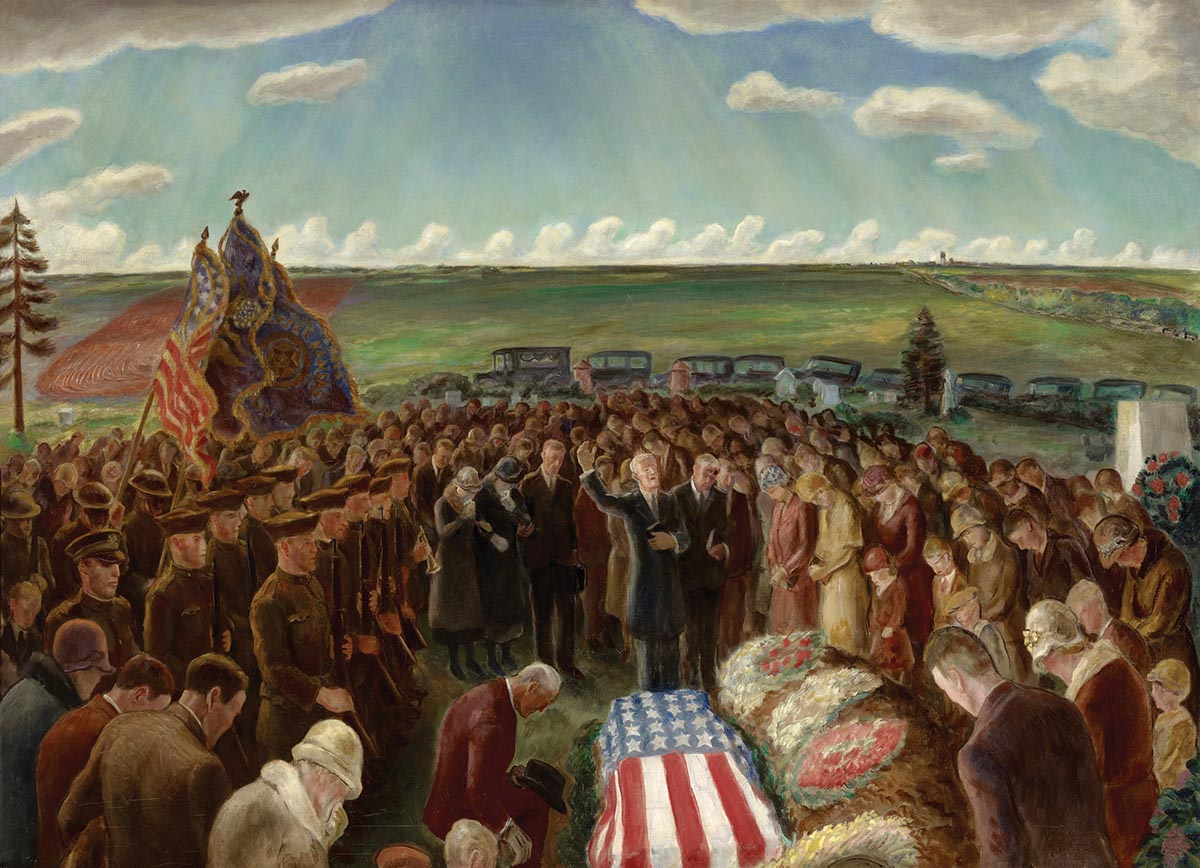 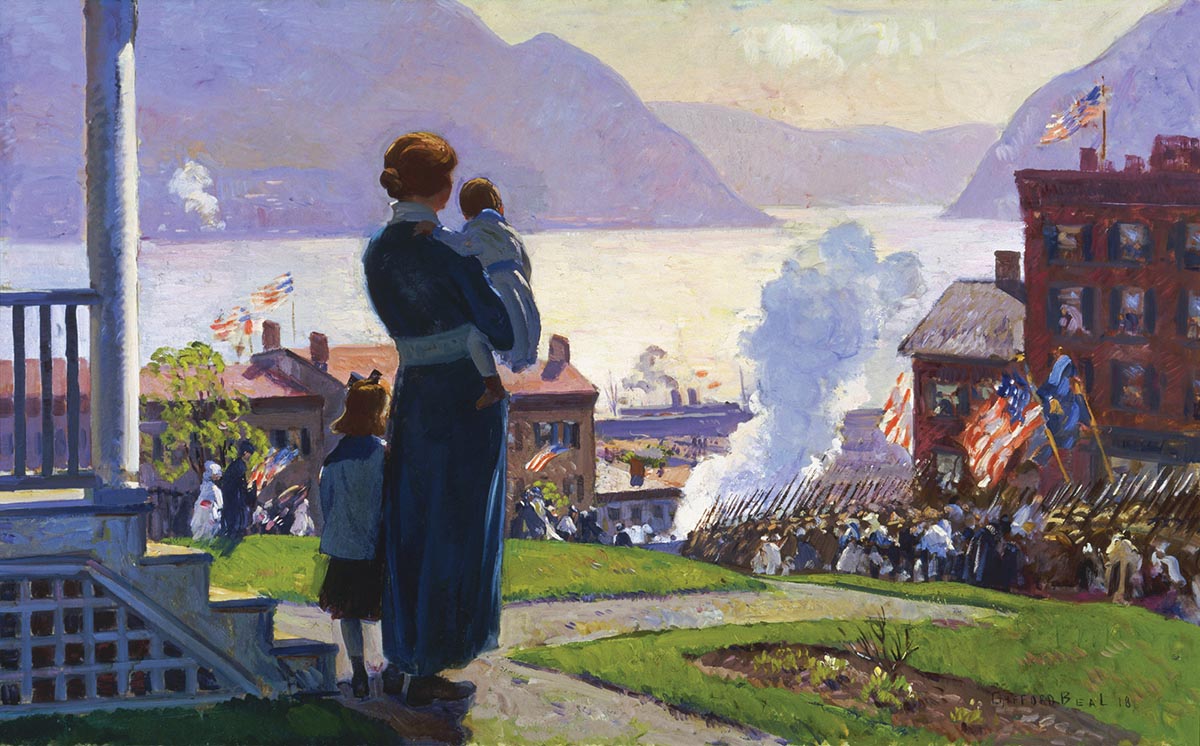 World War I and American Art is on view at the Frist Center for the Visual Arts from October 6 to January 21, 2018. For more information, visit www.fristcenter.org.