“Yes, but it’s complicated,” artist Robert Lavieri laughed after pausing to contemplate his response to the question, “Do you think the link between creativity and the sciences is under acknowledged?” Lavieri is an artist who holds bachelor’s degrees in biochemistry and philosophy and a PhD in pharmacology from Vanderbilt University—his pause is reflective of a seeming divide that haunts the arts and sciences, as though popular perception has labeled the two unrelated. 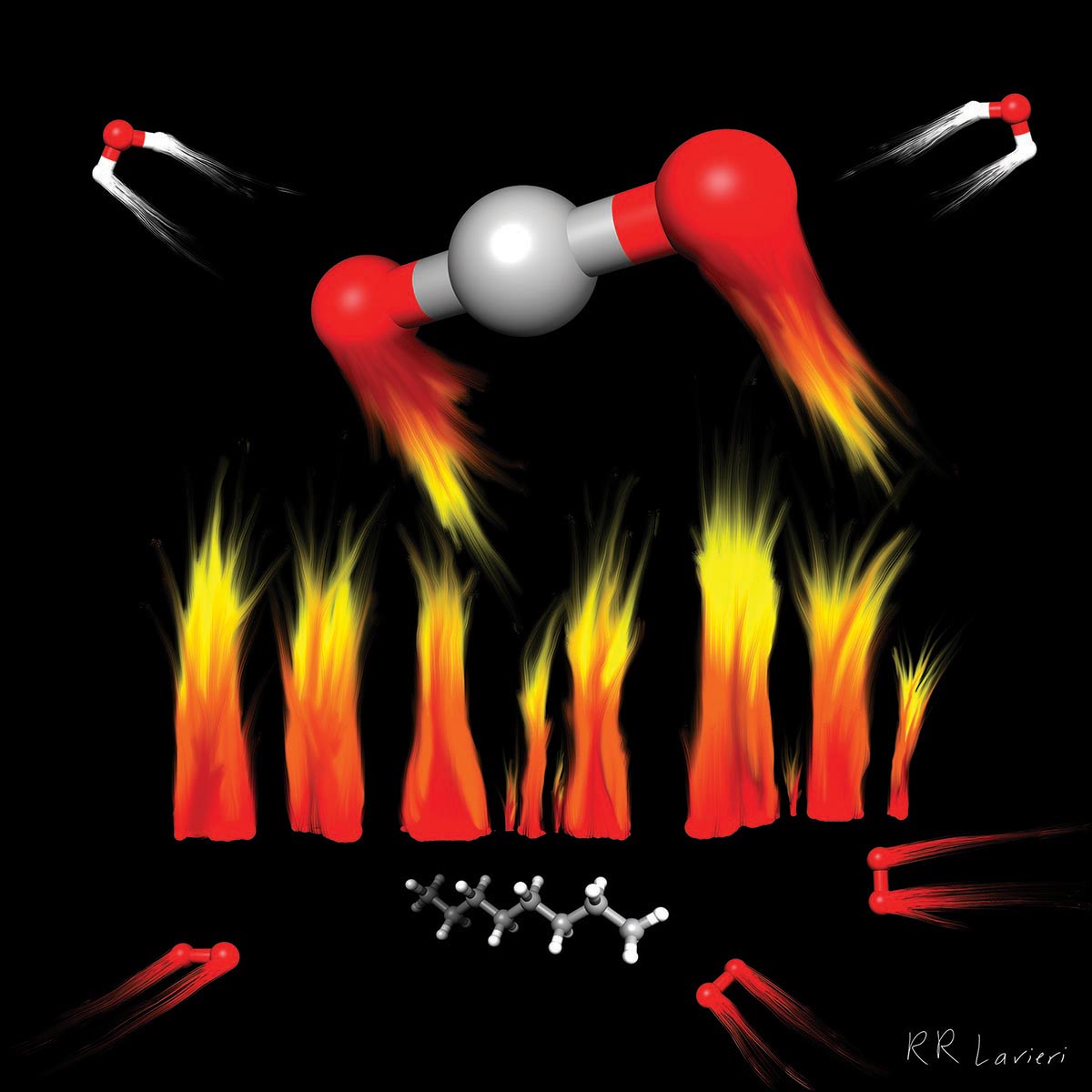 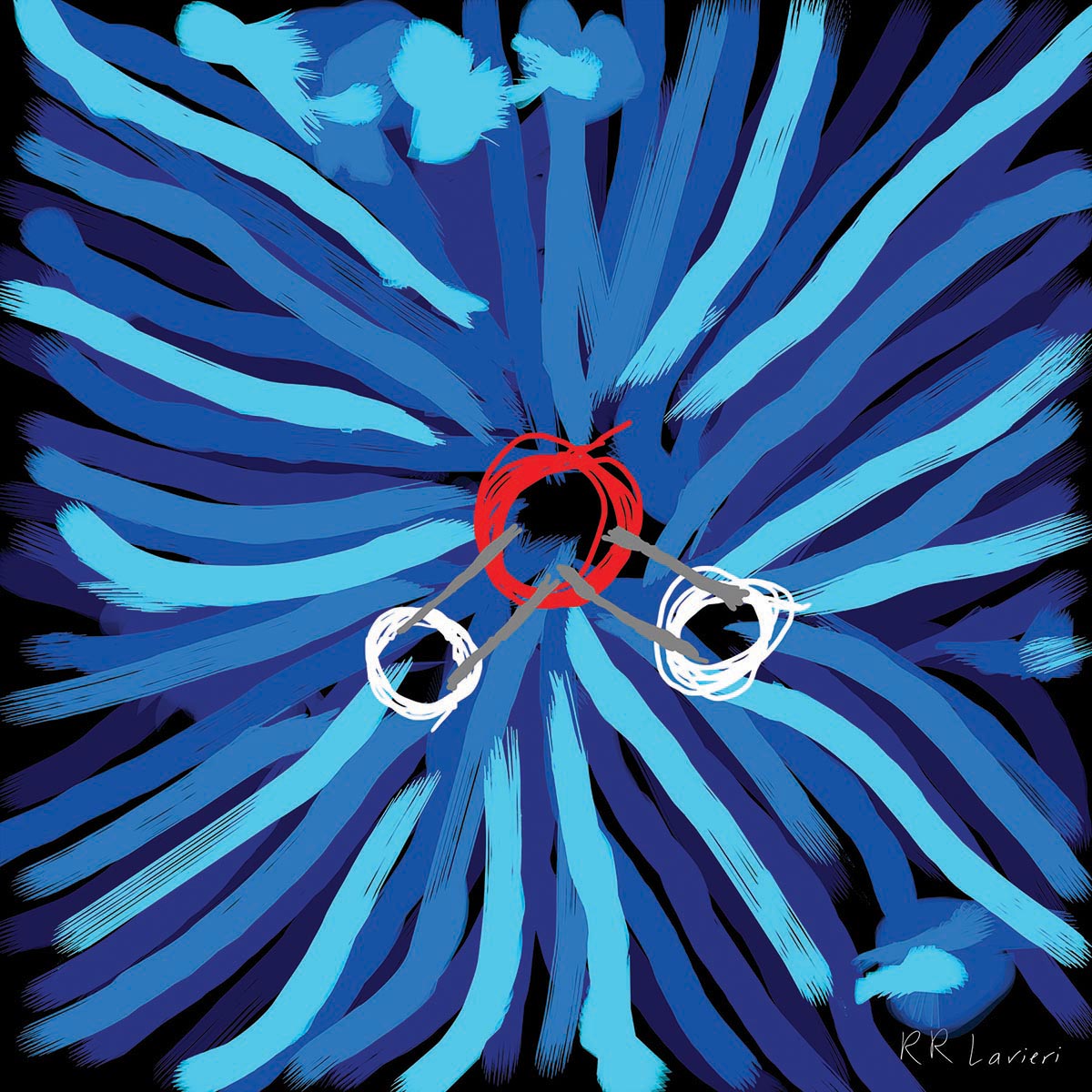 “People tend to oversimplify because that’s how human minds work. It’s easy to see someone as a ‘scientist’ in a lab working by themselves running experiments, but creativity is actually the most important aspect. If you’re a scientist who thinks you know all of the answers, you aren’t going to try anything new.”

Of course, a stereotype for an untamed, disorganized artist—an opposition to the methodical researcher—can be made as well. To Lavieri, such a gap is not only inaccurate, but it is also a source of motivation for his artistic process. Being a well-read scientist and a self-taught artist, he recognizes the presumptions that accompany both fields and challenges each through visual art grounded in scientific inquiry.

Lavieri creates prints on canvas based on molecular forms. In his process—a combination of digital photography, graphic design, freehand drawing, and digital art—the foundations of his images begin as structures rendered from raw data of biological molecules via various computer-software programs. He then further manipulates the palette and shapes to appeal to his personal aesthetic. The result of these efforts is nothing short of enchanting. 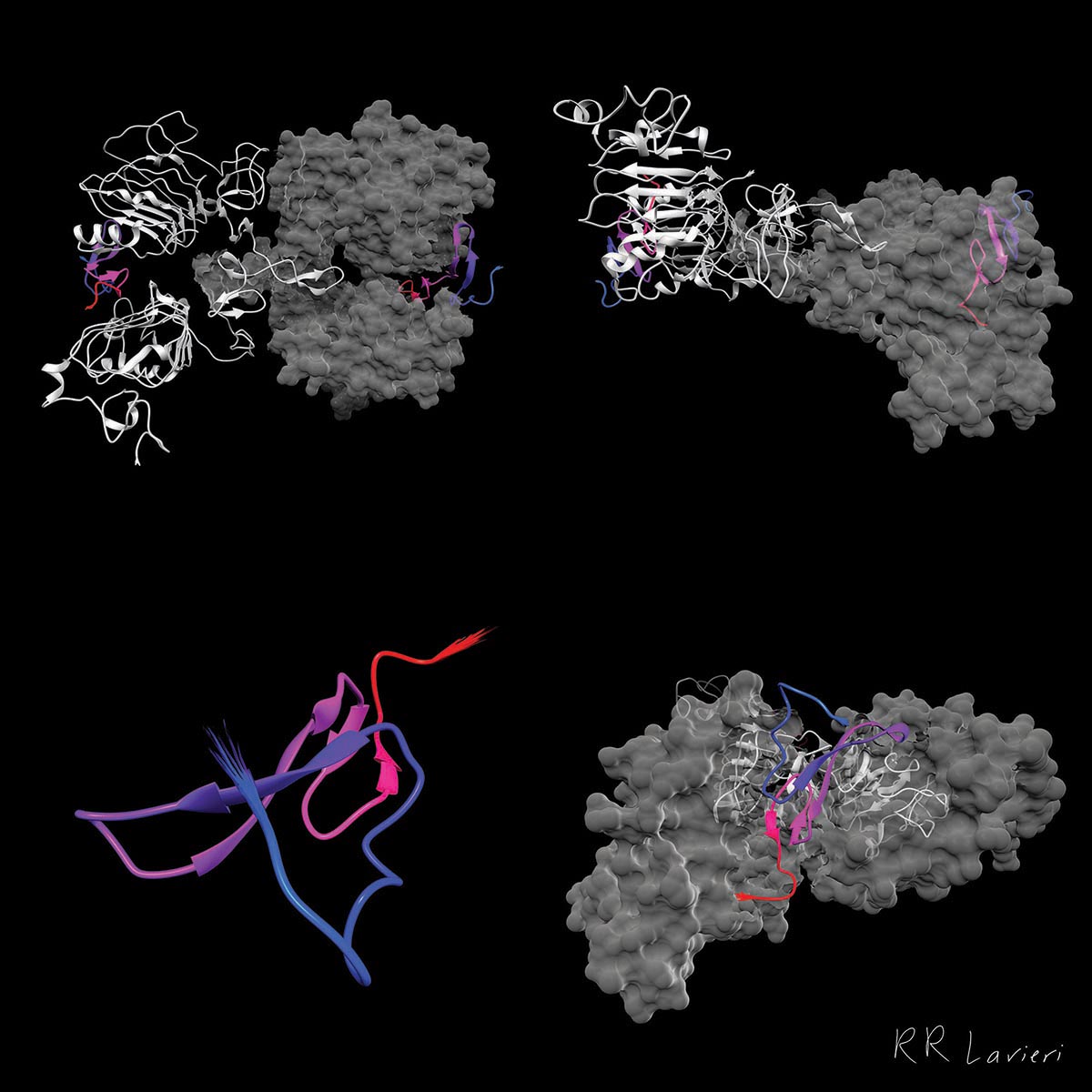 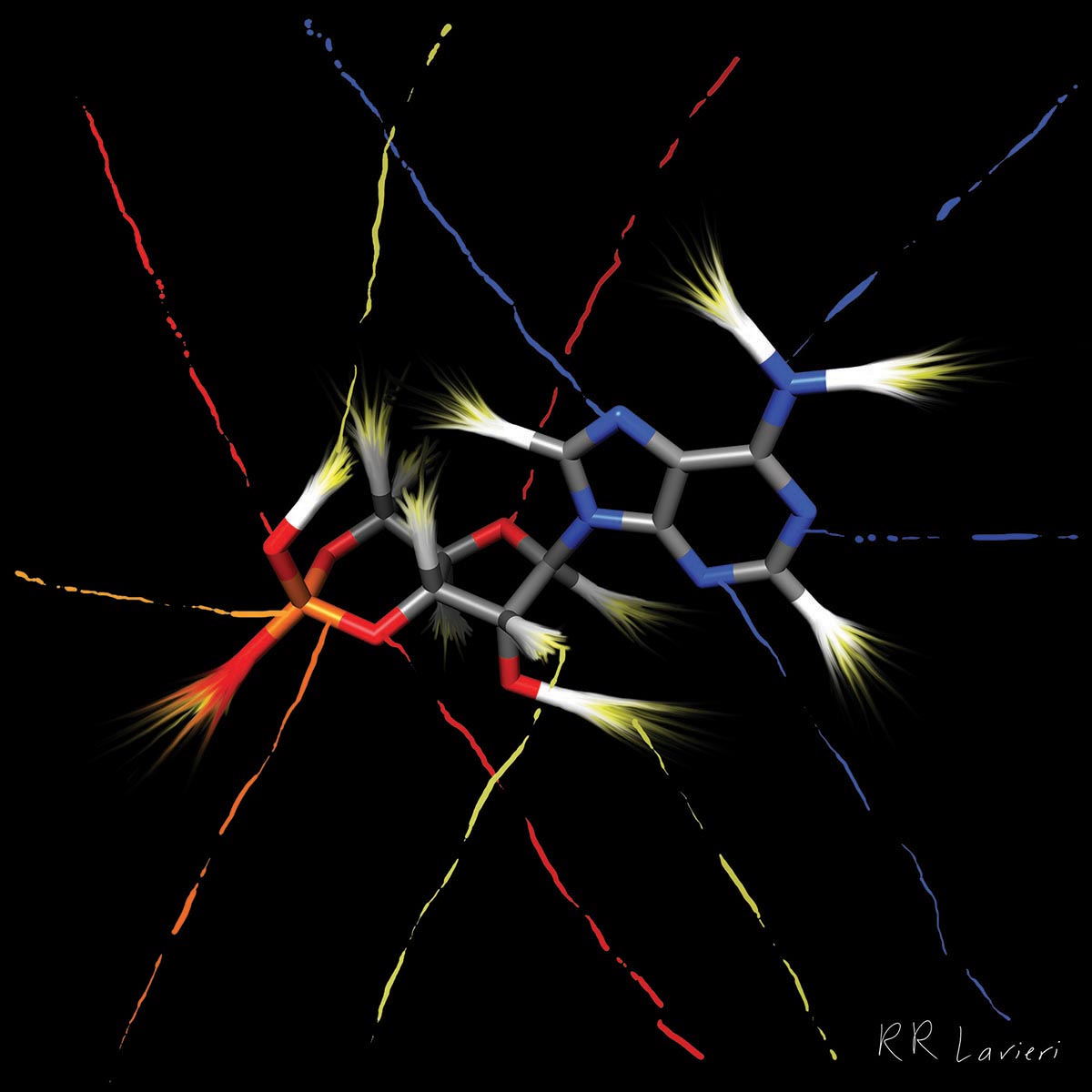 Positioned against a stark black backdrop, Lavieri’s vibrant abstract forms represent a span of complementary hues that flood his canvases like the free-floating cosmos meandering through an infinite night sky. So imaginative is his artwork that one cannot help but think such images are pure abstractions, labors in geometric exercises that will not relent until the artist achieves satisfaction. And, in a sense, this exchange is present, yet there is more at stake than line and color. There is also more at stake than reference to scientific form.

At the heart of Lavieri’s work resonates a deep commitment to curiosity and sincere gratitude for those who have labored in the name of progress. “Everything I’m doing is building on the work of countless people in numerous fields—not just scientists, but computer programmers, artists, and scholars,” stated Lavieri. “I am genuinely thankful that they exist; it’s because of them that I get to do what I do.”

Lavieri first had the idea to create artwork based on molecular formation during his freshman year of college. After viewing a number of protein structures, he could not help but acknowledge their physical beauty, a realization that is almost ironic given that such structures are invisible to an unaided eye. Lavieri decided to expose more people to the images of molecular formation by creating visual art reliant upon this data. In doing so, he and his work also bridge the perceived disconnect between art and science, and thus prompt dialog that suggests interdisciplinary continuity. 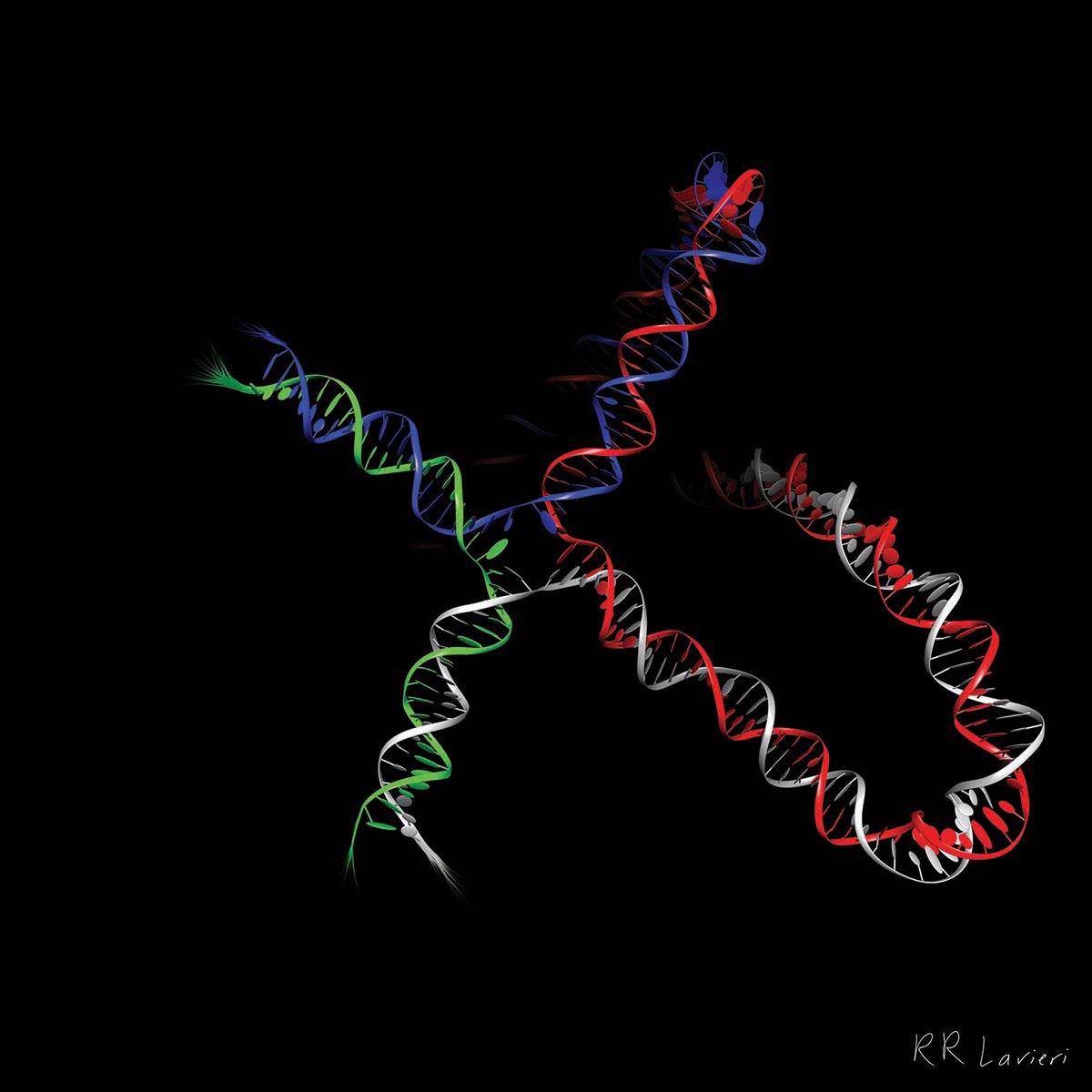 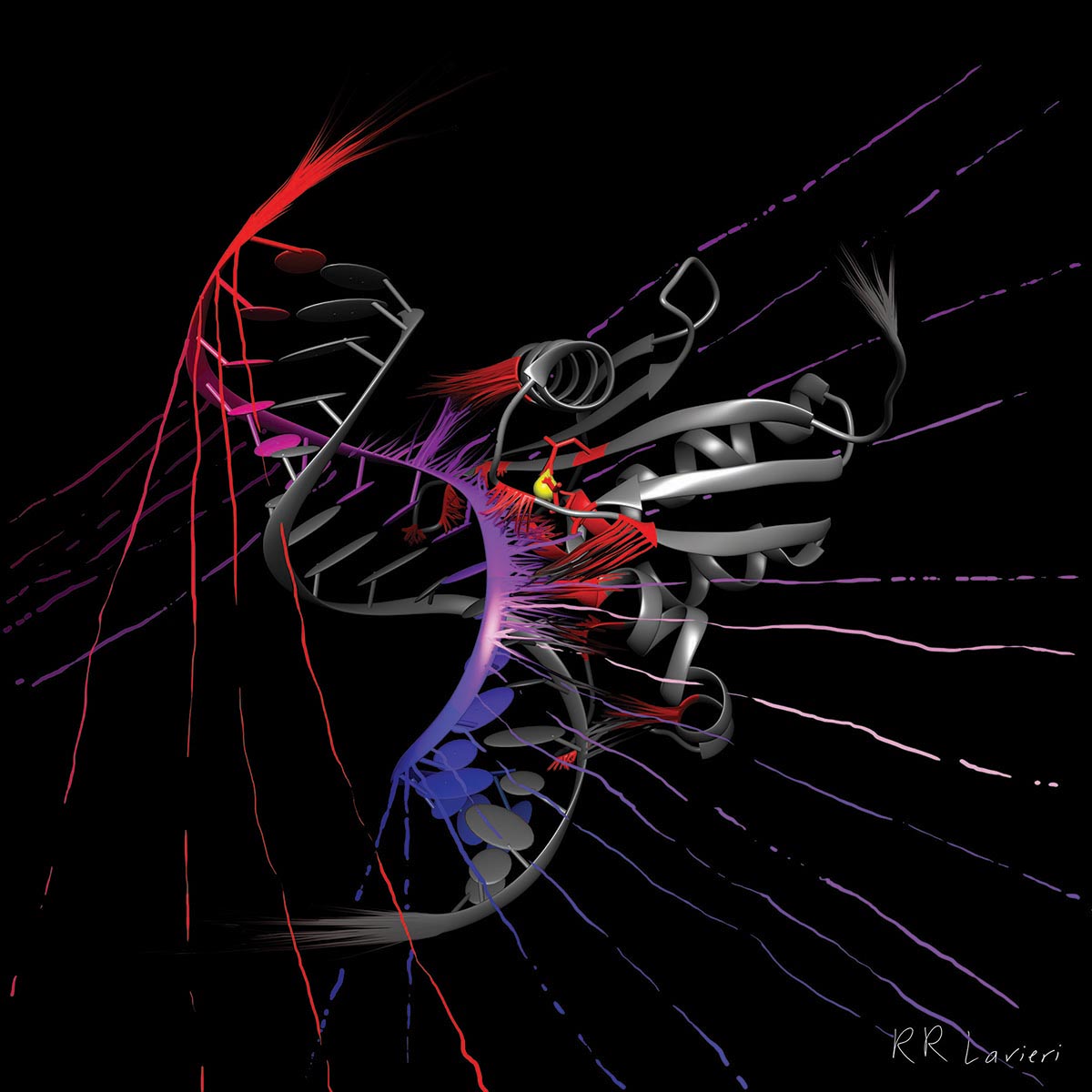 This interdisciplinary interest is one that is also upheld by Vanderbilt University. Perhaps, then, Lavieri’s latest exhibition has found a most suitable home on campus in a gallery of Vanderbilt’s Wond’ry, a building dedicated to “facilitat[ing] transinstitutional collaboration between students and faculty from all schools, levels, and disciplines.”

“Most people will never see that which can’t be viewed by the naked eye. This is what drives me. I try to provide people with something to see that wouldn’t be practical on their own.”

Lavieri’s exhibition Vanderbilt’s Nobel Laureates: A Visual Tribute to Discovery and Innovation is on view in Vanderbilt’s Wond’ry building through January 1, 2018. For more, visit www.vanderbilt.edu/thewondry. See more of Lavieri’s work at www.rrlavieri.com.