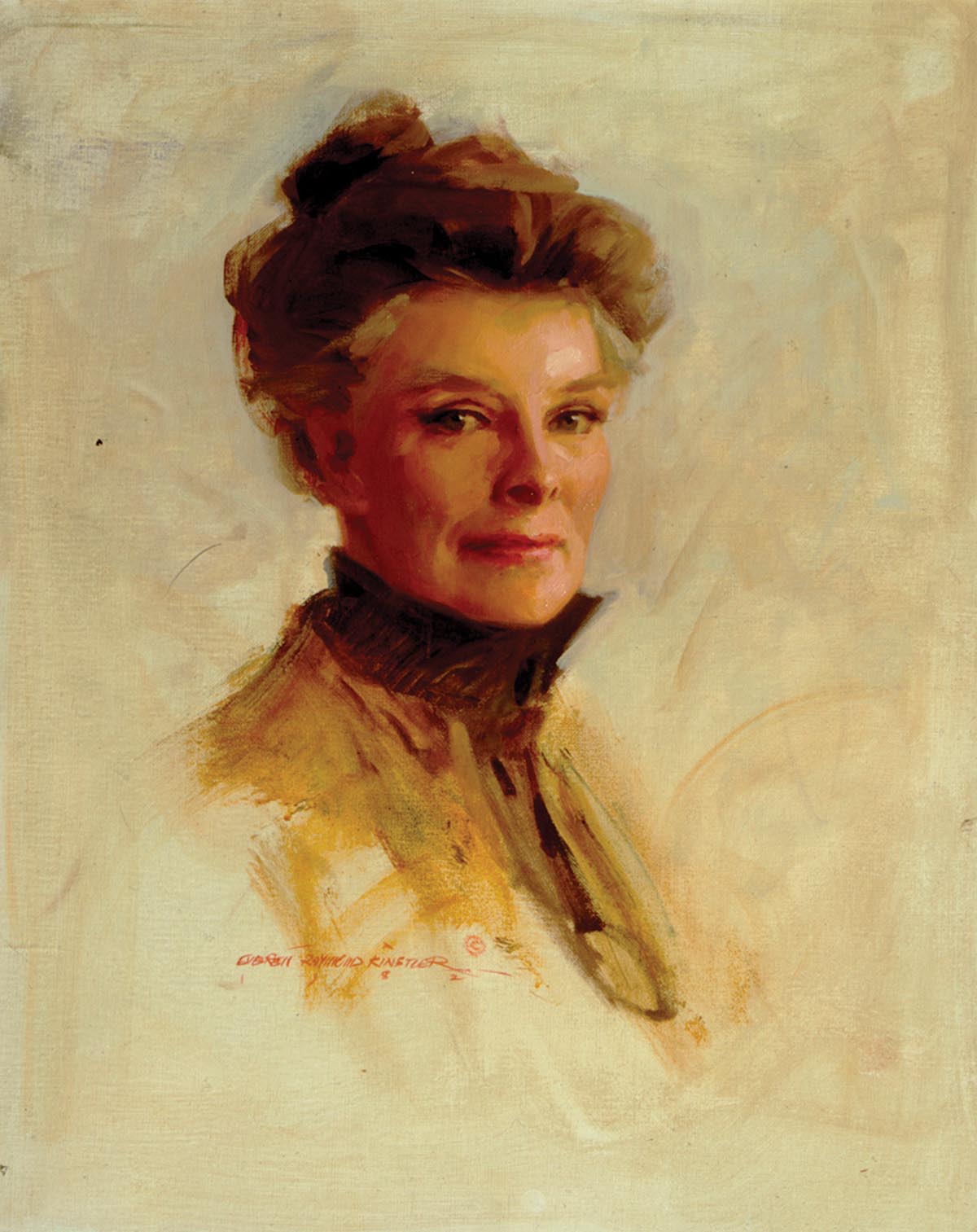 What is so disarming about Everett Raymond Kinstler—one of the most sought-after portrait artists in the United States today—is the ease with which he admits that he left school at age 15 to pursue comic book illustration. Enchanted by the drama and action of visual popular culture, he wanted to become one of the artists he so admired. It was the “golden age” of comics and the heyday of pulp fiction. Illustrators were in demand for posters, advertisements, and book and magazine covers. The young Kinstler headed to West 45th Street in downtown Manhattan to hire on as a staff artist and illustrate comic books at one of the major publishing houses. He moonlighted by honing his skills in life drawing at the Art Students League. Kinstler was both talented and persistent. His acute powers of observation and his remarkable facility in handling charcoal, pencil, ink, and brush were sharpened by the speed required for illustration and slowed by the steady hand and deliberate choice of line and shadow needed to catch the essence of a live model. Along the way, he spent many hours as an apprentice inker, helping to turn out hundreds of comic strips per week.

When he speaks to young artists today, he suggests that they, like stage actors, try to master a panoply of techniques: “To be a good painter,” Kinstler advises, “be a rounded artist, not a specialist.” Those words of wisdom have found their mark. He has mentored many, from his teaching at the Art Students League to his decades of small group outdoor painting workshops. In 2006, he was pleased and delighted at an invitation to travel to San Diego to be feted with an Inkpot Award at Comic-Con International—a tribute from thousands of contemporary cartoonists, graphic novelists, and animators. 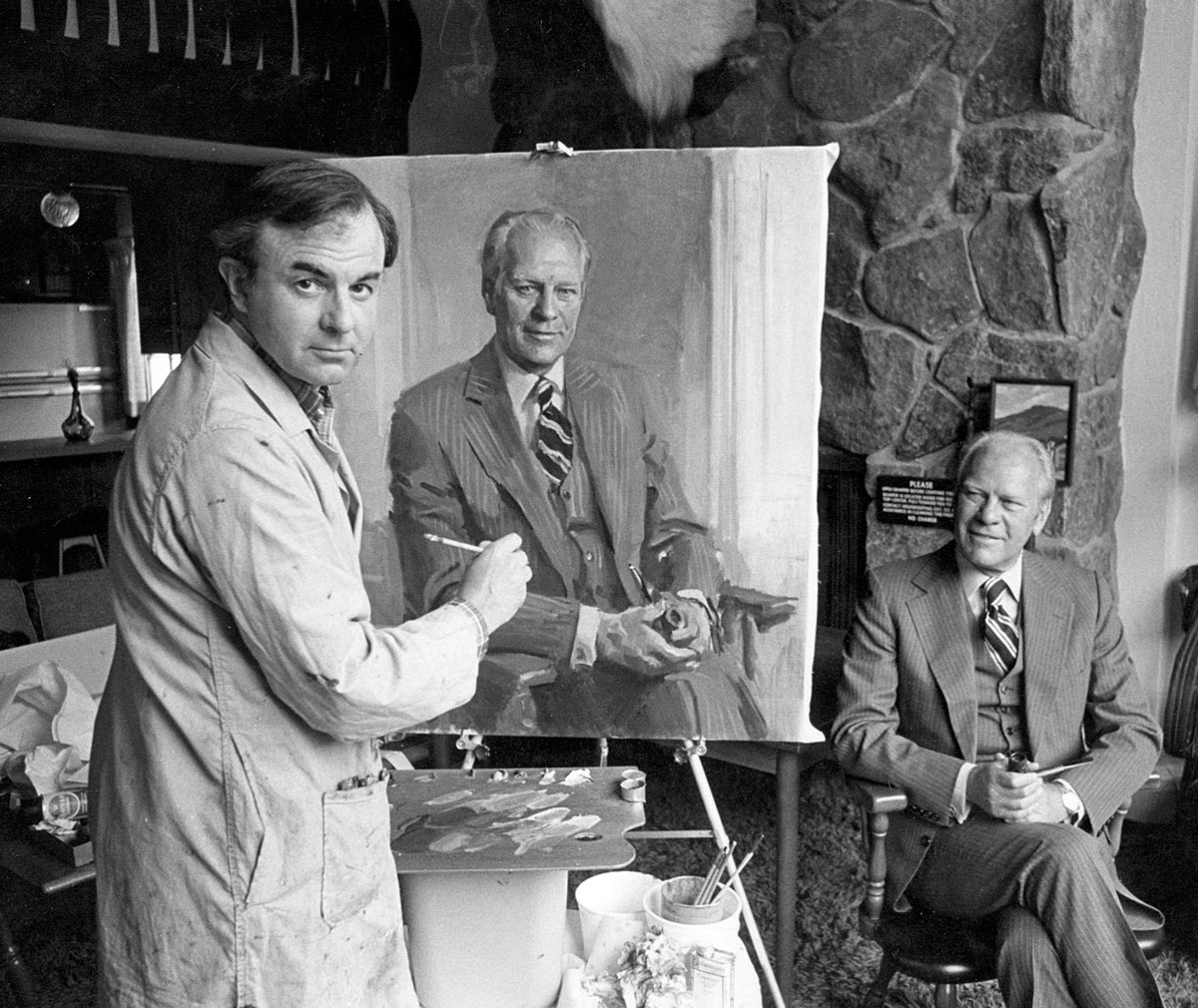 Like his friend Tony Bennett, Kinstler grew up in New York City, Kinstler in Manhattan, Bennett in a modest household in Queens. Both attended New York City’s High School of Industrial Art in Manhattan, but dropped out in pursuit of professional pursuits: Kinstler to become a “journeyman” artist, Bennett to go after singing gigs in clubs and on to musical theater and the big band circuit. Both men joined the war effort when they came of age in the final years of World War II. These days, the two 90+ year-olds, born two days apart, are still at the peak of active careers. By dubbing Kinstler the “John Singer Sargent of our time,” Bennett has given his friend the greatest tribute any portraitist could want. They talk by telephone weekly. Amazingly, and by sheer coincidence, the two will be in Nashville during the same week in March 2018: Bennett for a performance at the Ryman Auditorium on March 20th and Kinstler on March 23rd and 24th for the opening of his exhibition America Creative: Portraits by Everett Raymond Kinstler at Vanderbilt Fine Arts Gallery.

With more than seventy-five portraits in the permanent collection of the Smithsonian National Portrait Gallery in Washington, D.C., Everett Raymond Kinstler is one of the best-known living portrait painters in the United States. His portraits are distinctive both for their dashing brushwork and masterful intimacy. All done from life, requiring at least one sitting before the artist, these portrait likenesses of Presidents and First Ladies, Supreme Court Justices, actors, musicians, fellow artists, business and government leaders, and university presidents can be found in public and private collections across the United States. Many, like his 1980 depiction of jazz great Benny Goodman for the National Arts Club and his 1982 painting of beloved children’s author Theodor Geisel (Dr. Seuss) for Dartmouth University, were commissioned for inductions into professional organizations or as lasting tributes to their accomplishments. 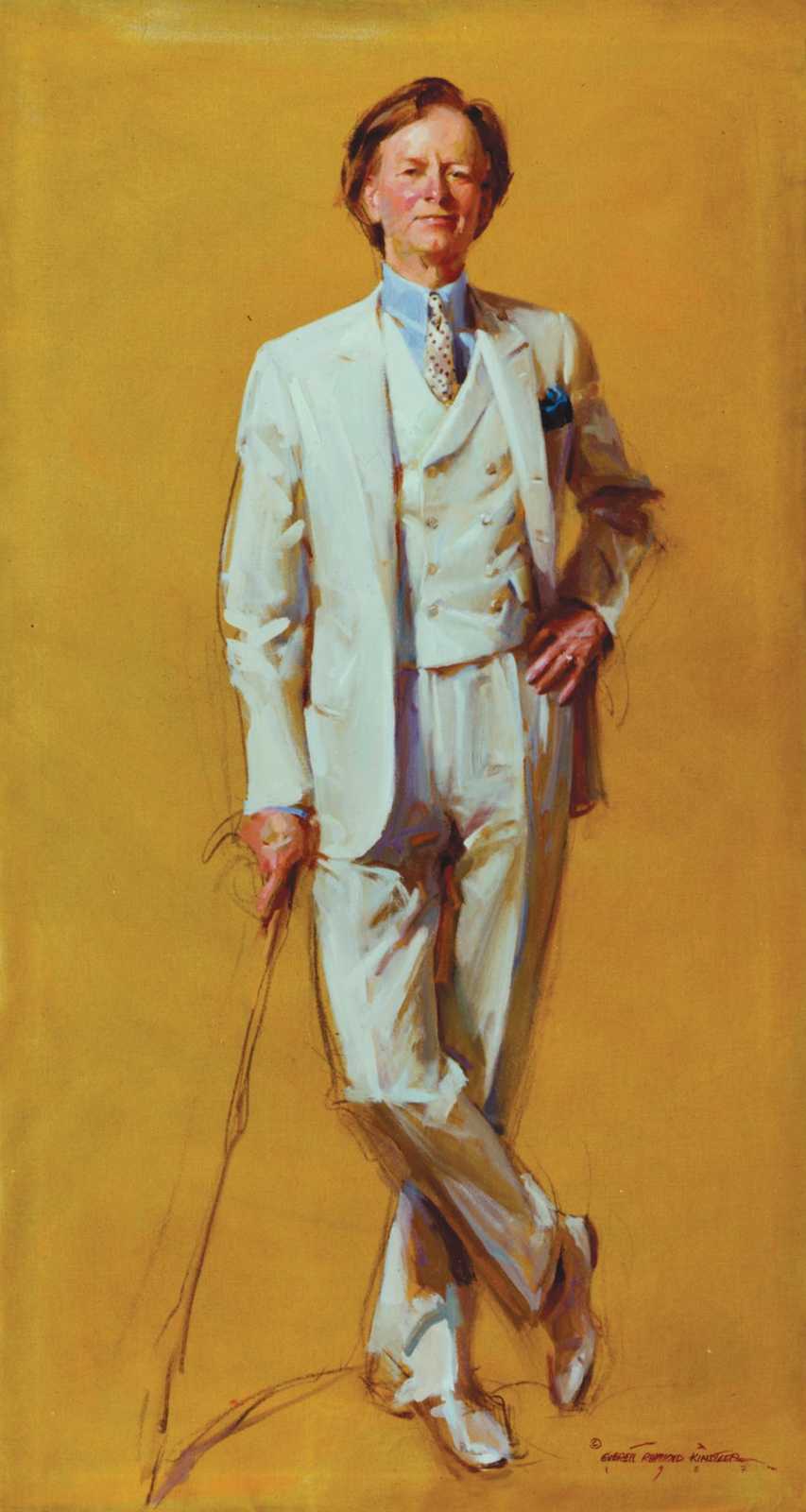 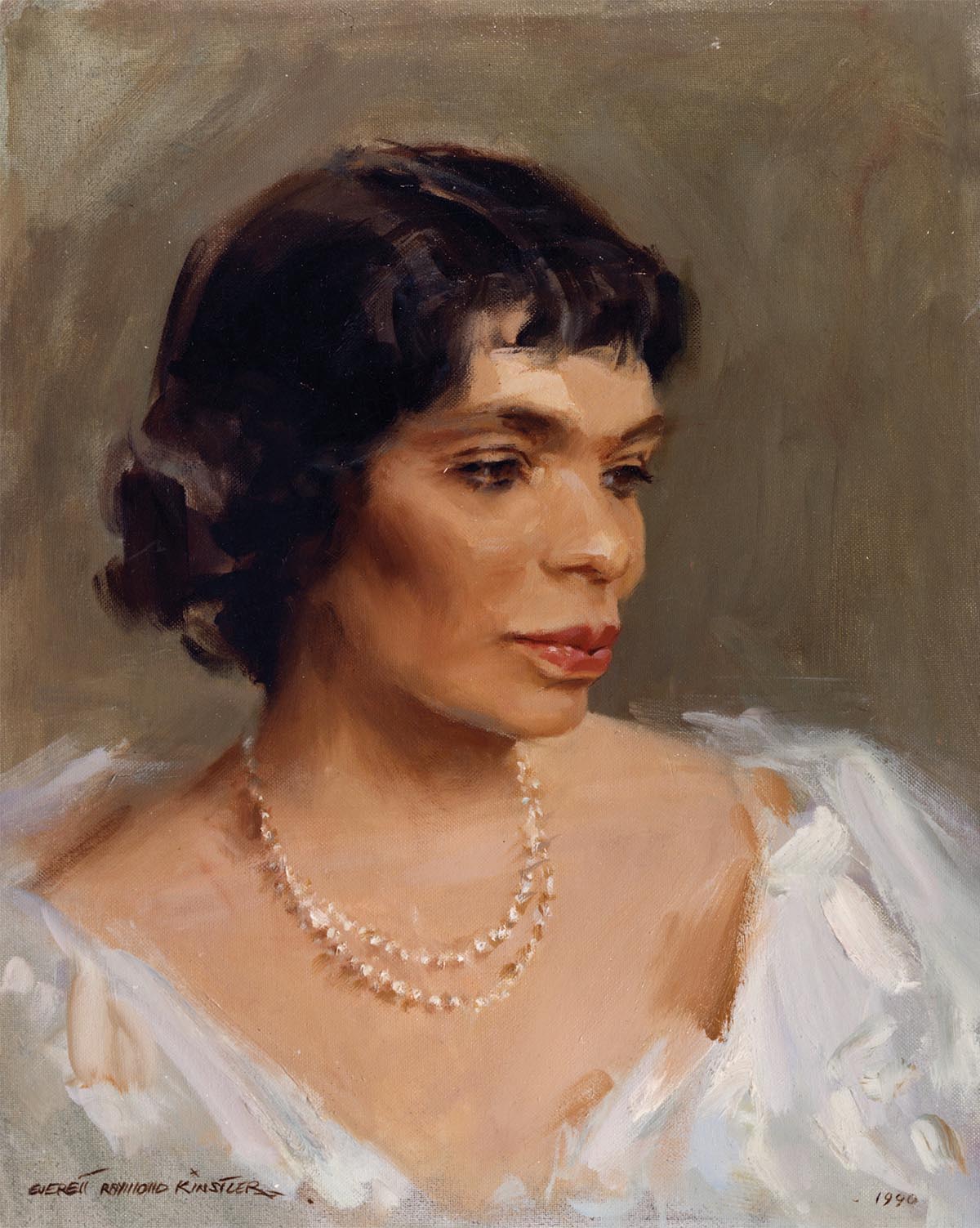 The irony is that Kinstler’s outstandingly successful career in portrait painting was never planned. As much as he enjoys the path his art has taken, he cheerfully admits that he would have continued to illustrate comic books and pulp westerns had not television come along to usurp the public imagination in the 1950s. Whereas he had always drawn portrait types to accompany the fictional plots and twists of popular writing, he recognized that he could do as well or better putting his skills to work studying the personalities of real people. And so he has. 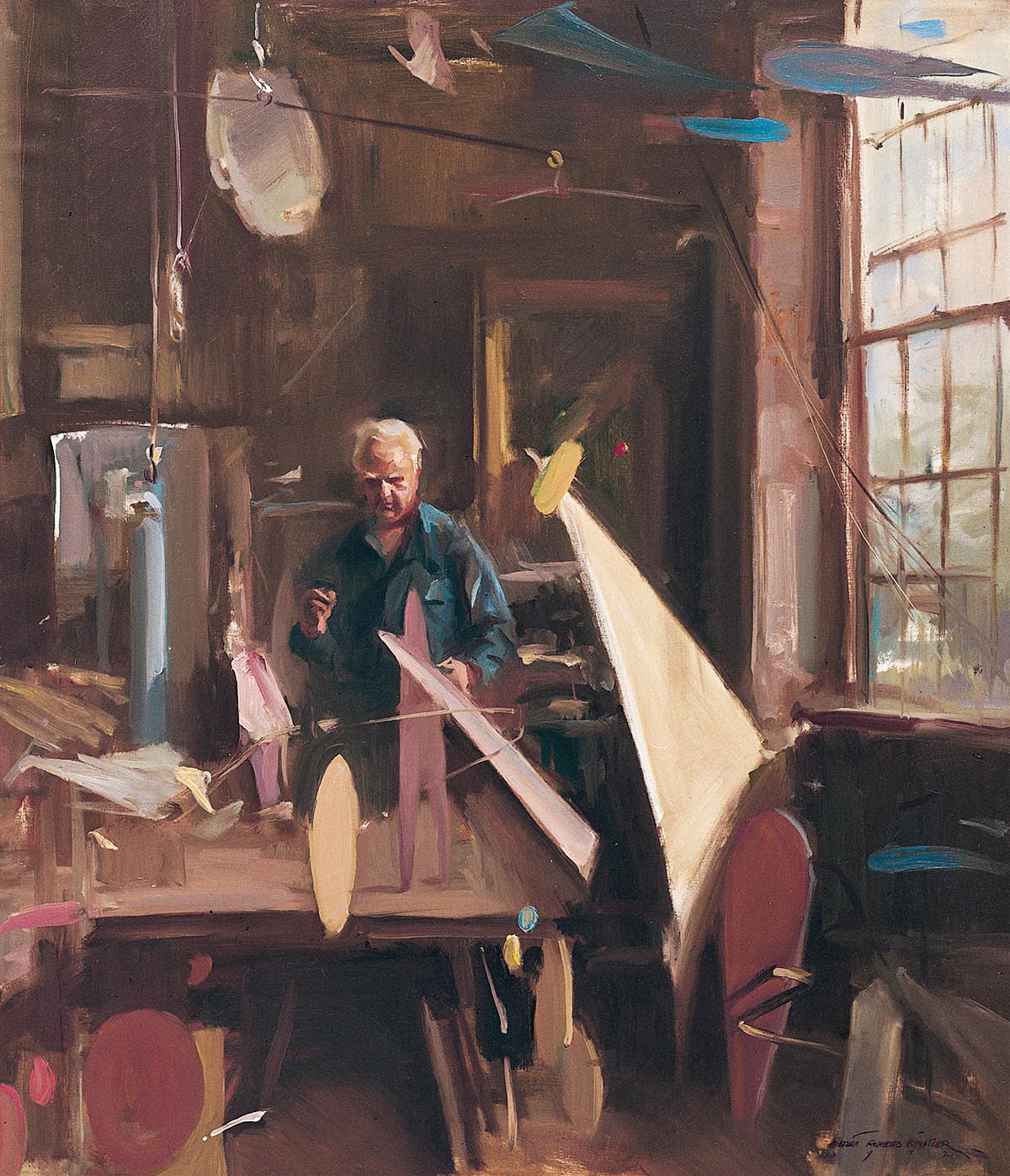 One of the reasons for his popularity with high profile clients, besides his ebullient nature and generosity of spirit, is that Kinstler not only works hard to find those recognizable sparks of individuality, he also puts his subjects in the best light. In the case of President Gerald Ford, who was the first to commission his own presidential portrait, many of his paintings become family favorites. The Ford family was so enamored of Kinstler’s warm, down-to-earth depiction of their patriarch that they commissioned seven additional portraits. While such a high endorsement speaks for itself, it is also echoed by the fact that seven other U.S. presidents have also posed for him.

Kinstler, who has always kept a sketchbook, loves his work. No matter how many clients have graced and re-graced his studio, his consuming interest continues to be interpreting people. “I am hooked because I just enjoy the people I meet.” While some pay minimal attention or take little notice of the artist, many are flattered by his sincere interest in them, which extends way beyond just their facial features, posture, and overall demeanor. Katharine Hepburn, perhaps his most difficult and demanding client, returned again and again. Even when just passing someone in the street, Kinstler remarks, he will always recognize a person who has sat for him in the studio. Often, he spends as many as 80 hours on a portrait. While on rare occasion, as in the case of Ronald Reagan after he had left office, he will travel to a client for a portrait sitting, he says, “One hour in New York [at his Manhattan studio] is better than ten trips elsewhere.” 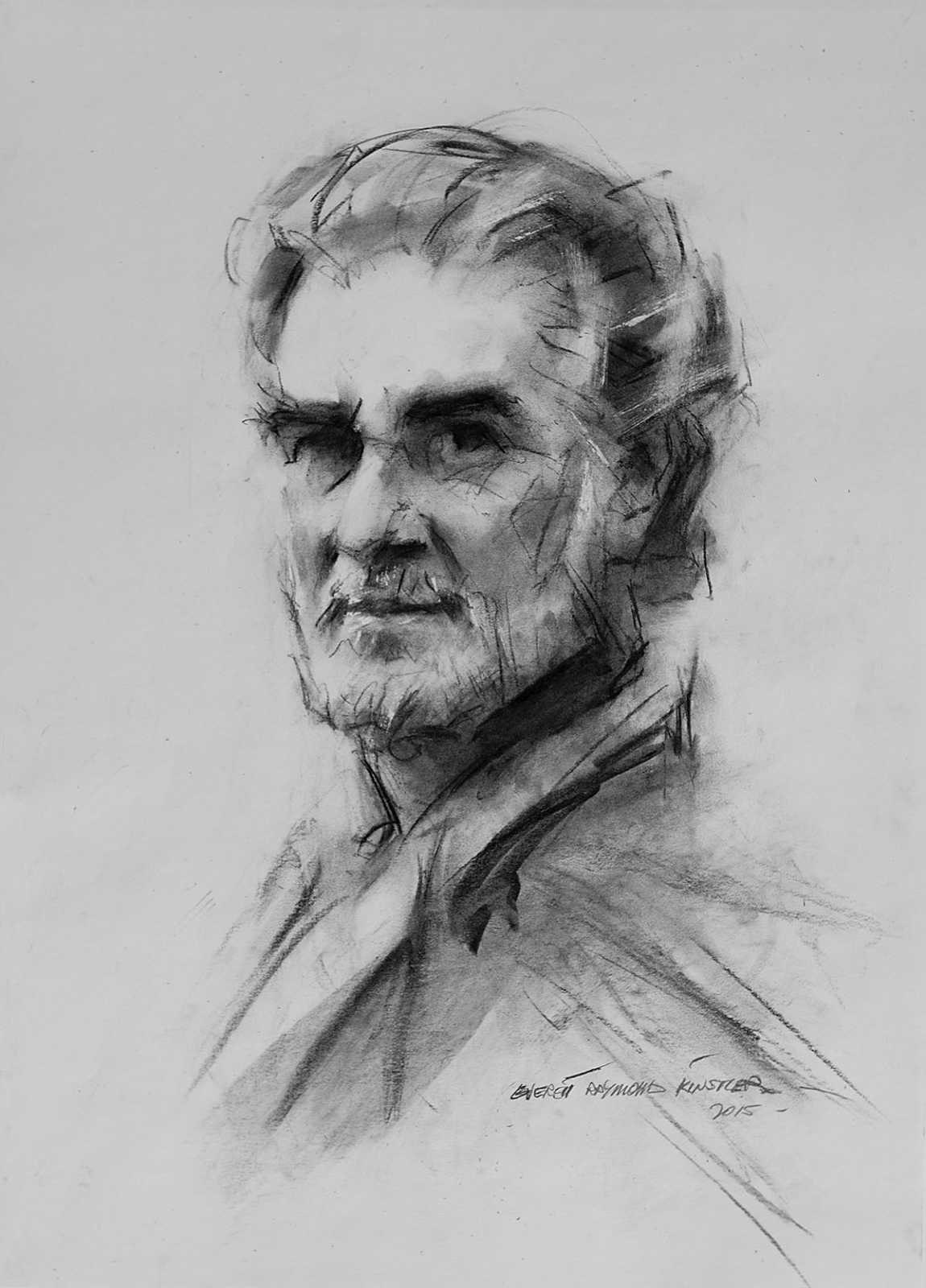 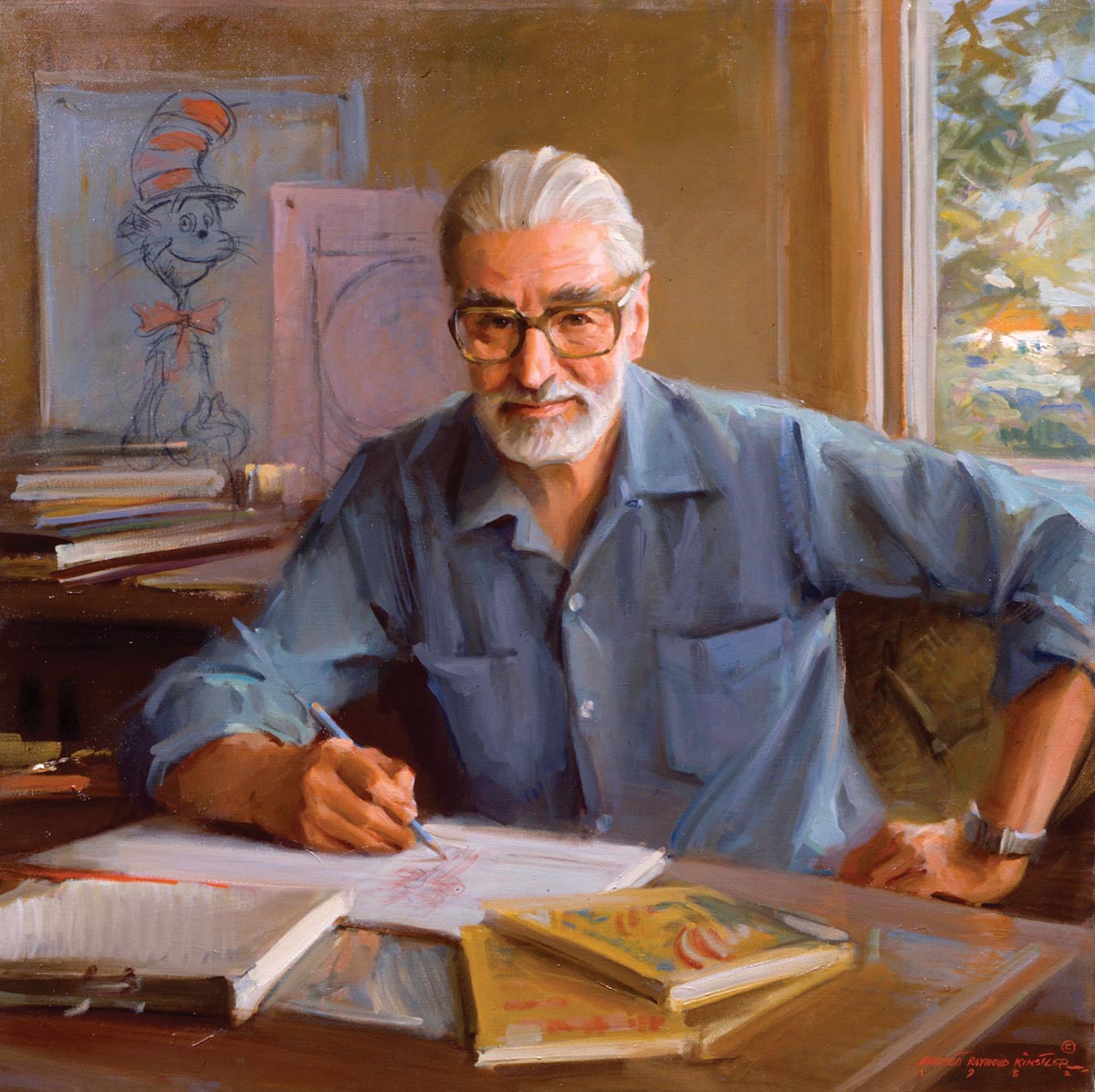 Kinstler maintains a historic, light-filled studio at the National Arts Club building on Gramercy Park, where he first took a studio apartment in 1949. He sought out one of his early idols, James Montgomery Flagg, the wildly popular illustrator who drew Uncle Sam for the 1917 World War I recruiting poster. Kinstler managed to convince the curmudgeonly and impatient Flagg, then about 75 years old, to sit for him. Kinstler’s incisive 1952 portrait of the once-dashing Flagg glowering directly at the viewer (Smithsonian National Portrait Gallery) reveals as much about Kinstler’s skills as a portraitist as it does about its subject. Now nearly forgotten, Flagg was lauded by Time magazine upon his death in 1960 as the most important artist of his day. Kinstler attended his funeral, where another once- famous artist, the muralist Dean Cornwell (known to Nashvillians for his colorful 1930s wall paintings in the Davidson County Courthouse and the John Sevier State Office Building), who was by that time almost begging for commissions, delivered Flagg’s eulogy. An artist’s artist, Kinstler is not shy about his artistic debts. He praises Dean Cornwell as one of the great American illustrators; he uses an easel that once belonged to the prolific Flagg, and he owns a palette used by John Singer Sargent, whose elegant society portraits once made him the toast of America’s wealthy art patrons.

Although he has long had important clients among Nashville society, it was Kinstler’s artistic friendships with Nashville artists Michael Shane Neal and Dawn Whitelaw that drew him to consider the possibility of the exhibition at Vanderbilt. For decades, Kinstler conducted summer painting workshops in locations from Maine to New Mexico, where Whitelaw, a professor of art at Lipscomb University, and Neal, her former student, were regular attendees. They were also two of his favorites, and the feeling is mutual. Kinstler never taught portraiture in these workshop settings— more valuably, he conveyed the heartbeat of his creative process. Always carrying a sketchpad, he would lead the group to locations, never tiring of catching a quick impression of a landscape or setting. Whitelaw is a skilled plein-air painter—one of the best—and the talented Neal, who still works from Nashville as a home base, has developed his own impressive career in portraiture, with commissions for the U.S. Capitol and the U.S. Court of Appeals. Says Neal: “I first discovered Everett Raymond Kinstler’s work in the pages of a book suggested to me by my college painting professor, Dawn Whitelaw. In the years that followed, remarkably, I would meet Mr. Kinstler, study with him, and become his friend. For more than 25 years, he has fostered my growth as an artist and impacted my view of the world. He has instilled in me the values of craft and the importance of an individual artist’s point of view. He has also taught me the values of hard work, respect, loyalty, devotion, and most of all the power of integrity. He has been there for me since the first day we met, encouraging me, challenging me, believing in me. You know a person has become an incredible force in your life when you can’t imagine your life without them.” 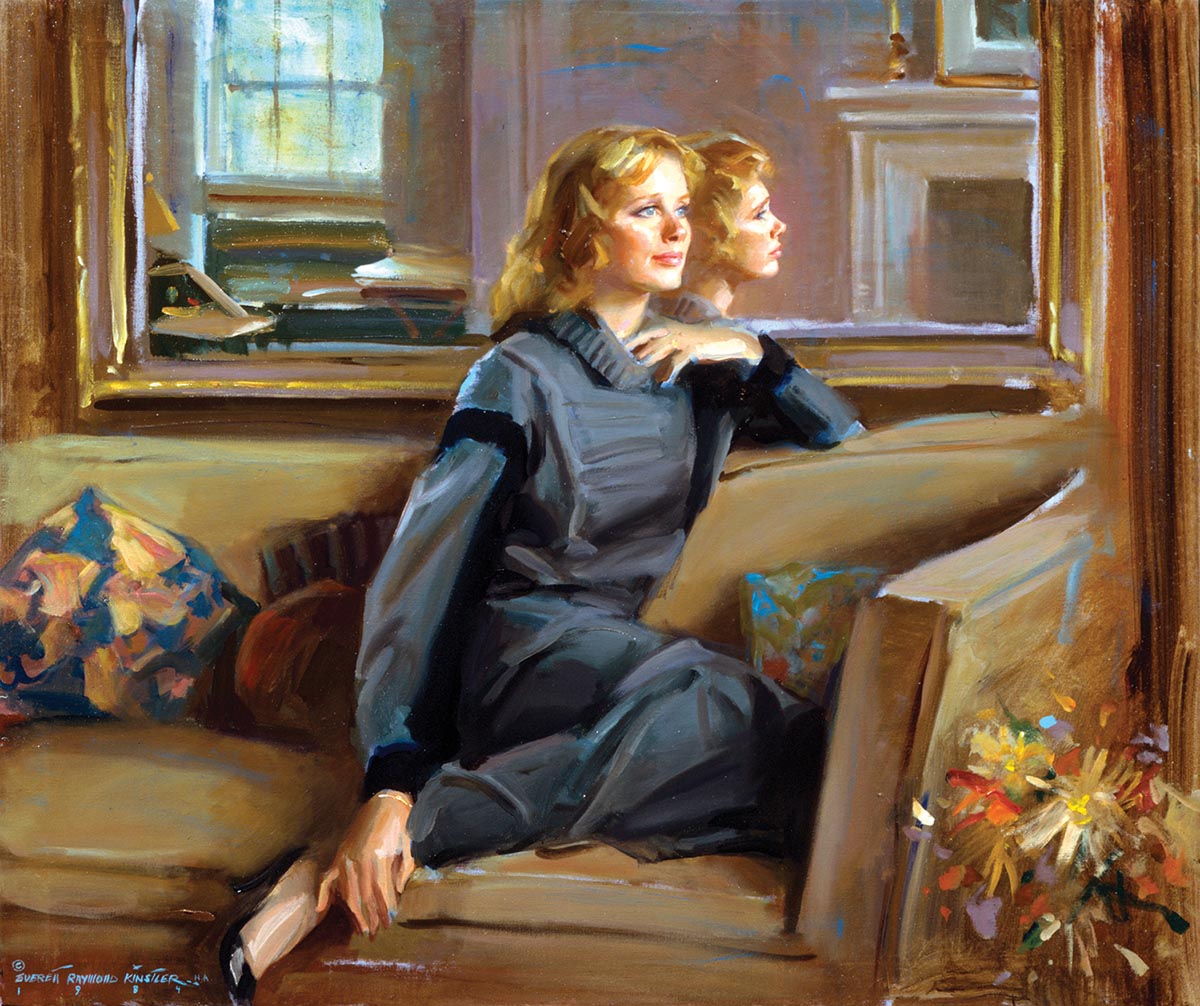 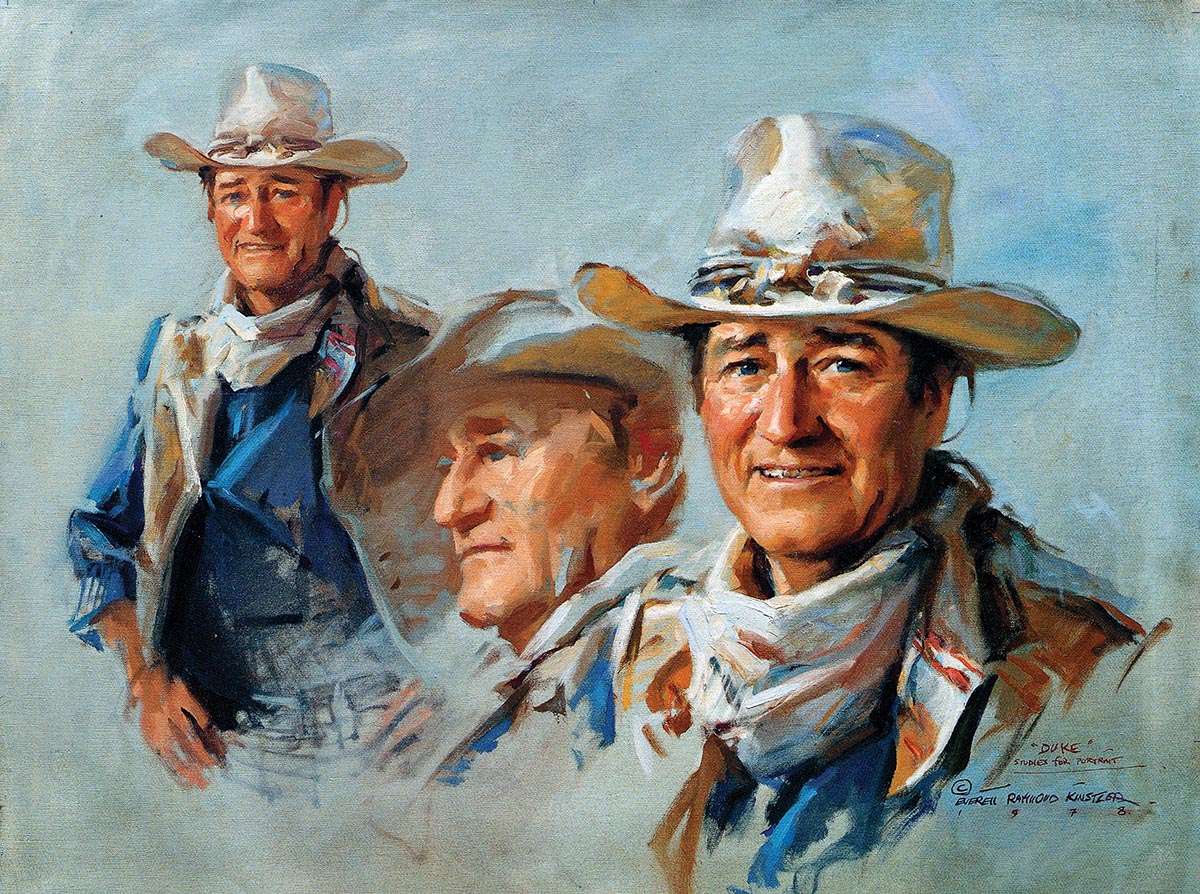 While in Nashville for the premiere of America Creative at Vanderbilt University’s Fine Arts Gallery, Kinstler, a master storyteller in words as well as images, will offer a free lecture and demonstration at Sarratt Cinema. And he will have stories to tell, as the exhibition strikes a particularly personal note. It includes what Kinstler considers his own best work: sculptor Alexander Calder in his studio; a beautifully rendered bust-length likeness of singer Marian Anderson that now resides at the Harvard Club; the social critic and author, Tom Wolfe, striking an elegant standing pose; plus a lively and energetic oil sketch of his close friend Tony Bennett. At the close of the exhibition, this special grouping of thirty-one portraits, most of art-and-entertainment-world figures chosen by Gallery Director Joseph Mella and Curator Margaret Walker, will leave Vanderbilt to travel to other venues, carrying with it the joy and ebullience of a master portraitist and his muses.

“Eight U.S. presidents have posed for Kinstler and many of his portraits are in the permanent collection in the Smithsonian National Portrait Gallery. He will be in Nashville March 22–24. 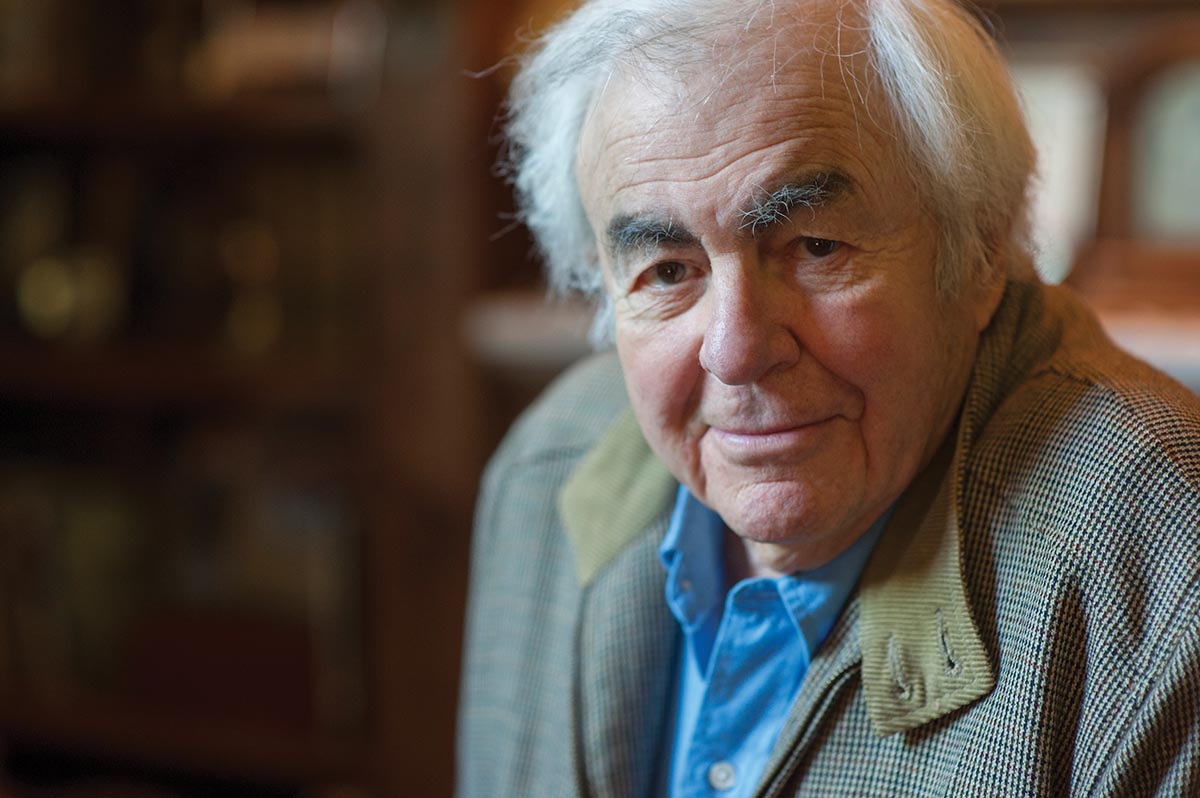 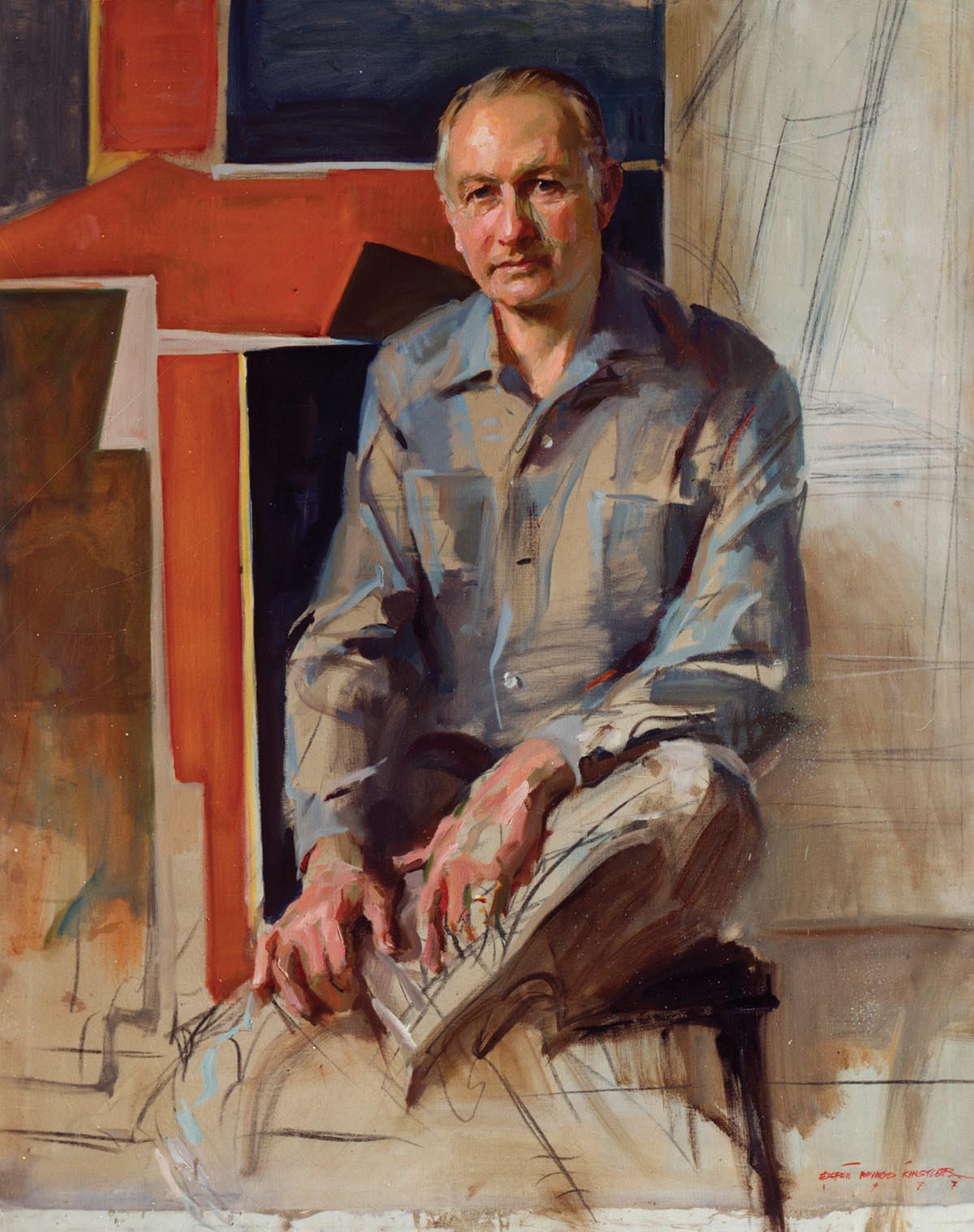 America Creative: Portraits by Everett Raymond Kinstler opens with a reception from 5 to 7 p.m. on March 23 at Vanderbilt Fine Arts Gallery and remains on view until July 14. In conjunction with the opening of the exhibit, Michael Shane Neal is hosting an onstage conversation with Mr. Kinstler on March 22 from 6 to 7 p.m. at Lipscomb University. A lecture and demonstration by the artist is scheduled for March 24 from 3 to 4:30 p.m. in Sarratt Cinema. For more information, visit www.vanderbilt.edu/gallery.