Figures dressed in bright-orange jumpsuits are being forcibly escorted by United States soldiers onto an American plane in Steve Mumford’s Empire. The blindfolded Afghan prisoners call attention to the act of viewing through their bodily expressions. Looking away, bowing heads, and turning their bodies toward whispering inmates, these men do not appear to be wanting or able to see what is before them. Embedded with the American troops in Afghanistan for ten years, Mumford documented what he saw. Chief Curator and Museum Director Alice Gray Stites explains that the work captures “the everyday banality, the boredom no matter what you are engaging in.” She elaborates, “What struck me so much is this depiction of not only blindness, but also that we are living in a time where we are so inundated with images of violence, with images of war, with images of injustice that we don’t see them anymore either.” The artist translates this scene of nearly everyday life into large-scale works that Stites calls “contemporary history paintings.” This painting inspired Stites in her latest exhibition Seeing Now, open now at 21c Museum Hotel. It is through this work that she began to think about how seeing has been presented in the museum’s vast twenty-first- century art collection. Quoting John Berger, Stites explains her point of investigation into the theme: “To look is an act of choice.” 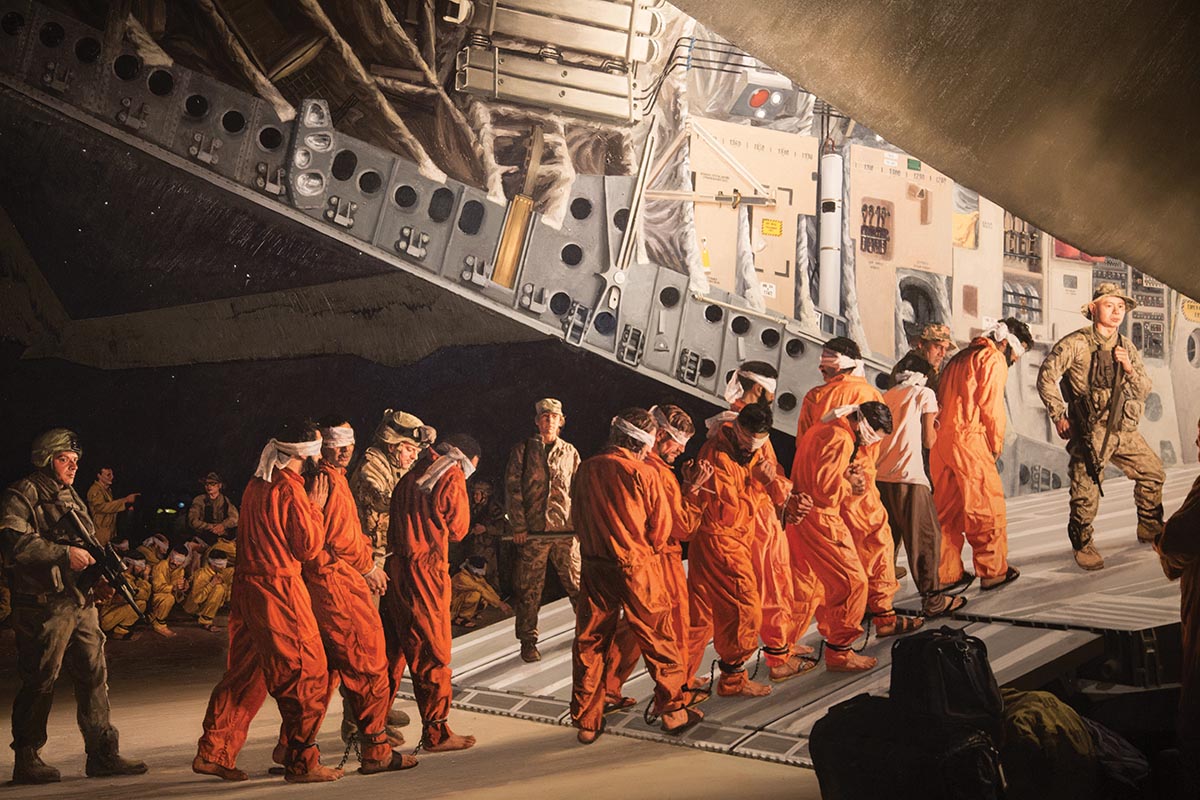 The show came into focus for Stites once she juxtaposed Empire with Rafael Lozano-Hemmer’s Zero Noon. With this group she established the foundation for what she summarizes as an exploration of “what we are seeing and how we see it.” Lozano-Hemmer’s interest in technology immediately interested the curator, and his visual presentation incorporating a digital content display struck her in particular. She enthusiastically elaborates, “That machinery, that technology that we look at all day long. It’s familiar to us because we come close to the screen and we see a hand going round and round at different rates. What appears, however, are random metrics pulled from the Internet. The statistics vary so widely . . . you are almost projecting . . . you are picking up on certain kinds of information because your brain or mind is trained to. It’s impossible to walk away. Not only are you consuming vast amounts of information, as we do, but instead of taking a quick look and walking away, the artwork holds you there. You become suspended in time. In a way it just slows down that onslaught of that exponential amount of information.” She concludes, “What it does tell us is what is going on in the world. It shows indices of change, but how do you make sense of those statistics? The artwork isn’t going to do that for you.” 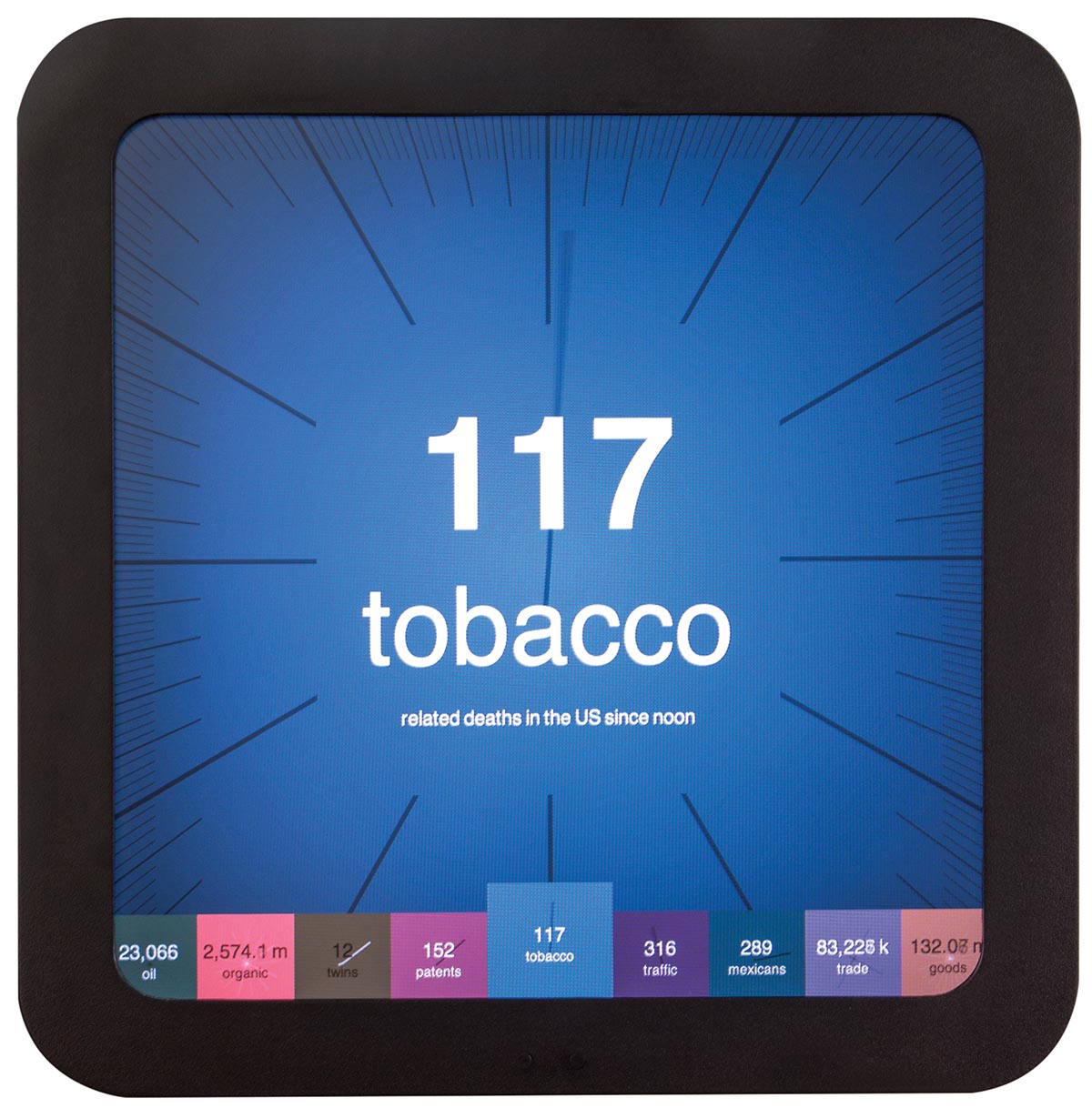 Continuing with a theme of technology, viewing Hank Willis Thomas’s With All Deliberate Speed requires the use of a cell phone. Looking at the rectangular composition, it becomes clear that parts of the image have been whited out. The artist left intact only a man carrying an American flag, giving the impression that the image conveys a patriotic or political message. Instructed by a nearby sign, the viewer is asked to participate with the work by taking a photograph using a flash. Like magic, the light develops the image so that the original image can be seen inside the phone. The resulting digital shot shows a scene of struggle during the civil rights movement. The title references the legal term defined from the Brown v. the Board of Education case. It declared that segregation in schools must end, but gave states the right to permit the separate-but-equal facilities to endure until a time determined ultimately by white men in power.

The act of using the phone limits those who can see the complete picture to a middle- to upper-class audience who can afford to own mobiles. Perhaps in some way the people who carry with them this historical image will remember this particular moment of hatred in history. It’s possible that these are the very people who still have the power to make changes in the brutal legacy of racial inequality. 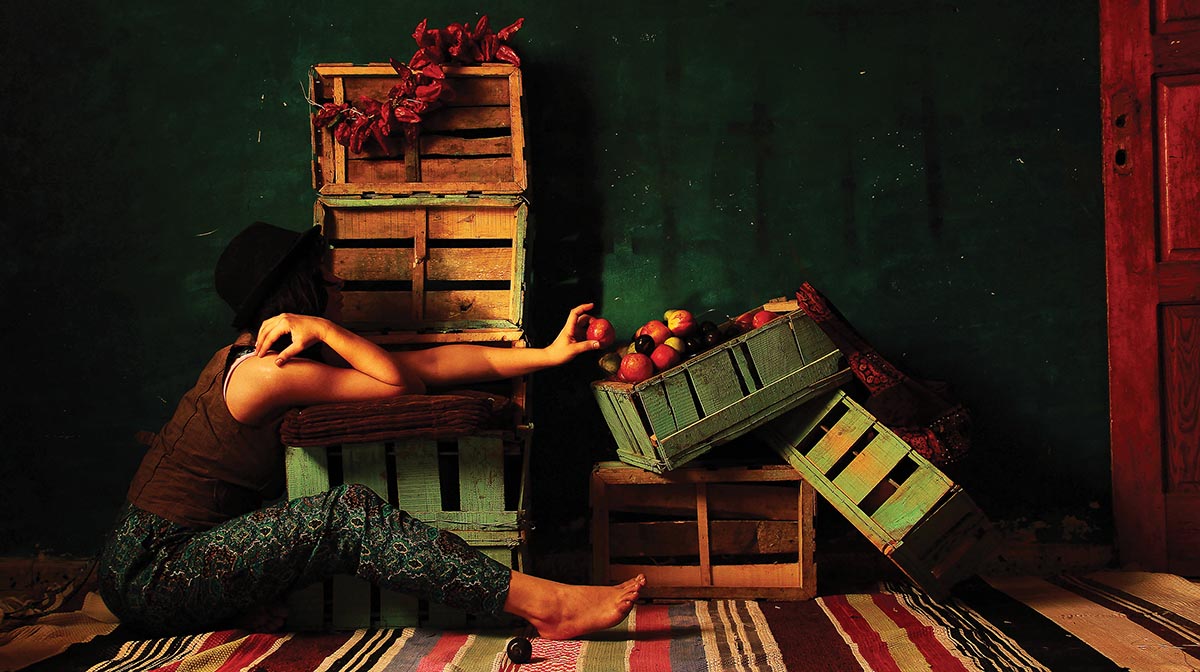 Omission by erasure is a theme that persists in a number of works throughout the exhibition. It is the unseen and what remains that carries meaning and drives attention in Ken Gonzales-Day’s collection of altered racist postcards in Erased Lynchings. Using mass-produced photographic images of lynchings of native American and Latino people, he calls attention to the fact that these were sold around the United States. Stites says, “You must decode what is going on here. It’s not apparent.” The artist calls attention to the devastating history of violence against people of color. Though the images were originally intended for entertainment, Gonzales-Day changes that intention by removing the suspended bodies from the postcard images, “Not only are you consuming vast amounts of information, as we do, but instead of taking a quick look and walking away, the artwork holds you there. You become suspended in time. leaving only the trees and the perpetrators. Although these astonishing objects are documented history, the bigotry they represent is not from a bygone era nor is it bound racially or geographically. As Stites adds, “It was a spectacle then, but yeah, there is far worse on the Internet today.”

In a talk hosted during the exhibition opening, musician and visual artist Paul Rucker posed questions to the audience regarding basic historical facts: What is the date of the Emancipation Proclamation? How many waves were there of the KKK? How much money does it cost to imprison people at Guantanamo Bay? And many more. At times the crowd would remain silent, only a voice or two willing to pronounce the answers and propose their guesses. To other questions, many people would confidently respond. It was a fun game, but there was a heaviness in noting the silence. Whether the correct answer was withheld out of caution or lack of knowledge remains unknown. What transpired was a group awareness of the gaps in remembrance. A lack of being and staying informed must be a lesson that pervades the communities Rucker meets as he travels on a lecture tour. 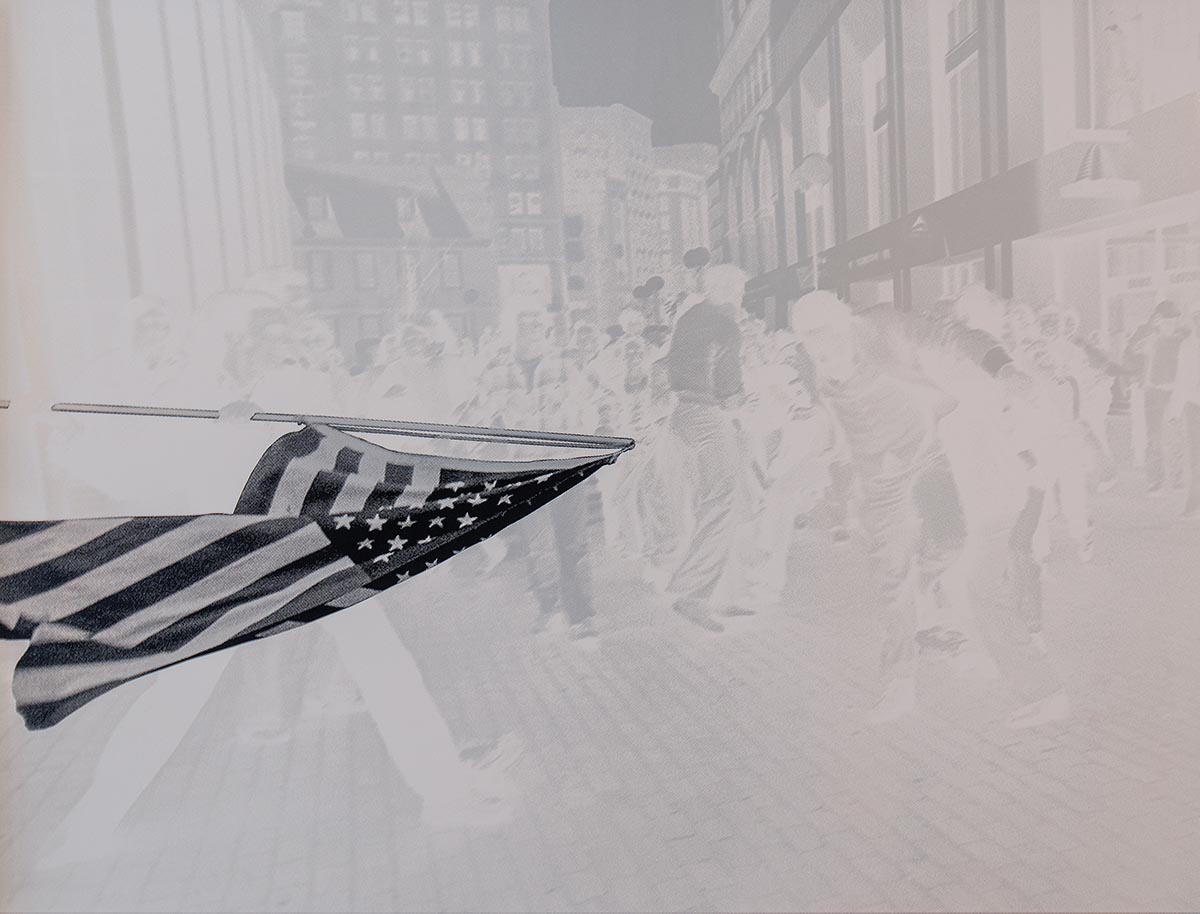 Rucker combines animation and technologies to organize information into meaningful ways with great aesthetic impact. His work Proliferation maps the growth and rate of prisons in the country from the nineteenth through the twenty-first century. Combining sound, light, and an outline of the United States, Rucker builds his composition. What begins as a few twinkling lights representing prisons spaced broadly across the map quickly crescendos into broad swaths of color representing nearly continuous prison complexes arising throughout the country. As a visualization of mass incarceration, it takes only a moment to see the truth of what that looks like geographically.

Hank Willis Thomas’s bronze cast sculpture Raise Up features upper torsos of ten figures with arms extending overhead. In a contemporary environment of the United States, these poses immediately trigger the Hands Up Don’t Shoot movement, which started around 2015 to protest police brutality. However, Stites is quick to explain that the sculpture is derived from a photograph that was taken in the late 1960s by South African apartheid-struggle photographer Ernest Cole. The photograph captures a scene of minors being strip-searched on their way to work. What Stites explains is “a degrading ritual that took place on a near daily basis.” The fact that this sculpture describes a real moment available in an archival photograph makes this work specifically recall the horrors in Africa. Simultaneously, the pervasive submissive pose is generally a reminder of ubiquitous shows of power through intimidation that have been inflicted upon people throughout time and across the globe. 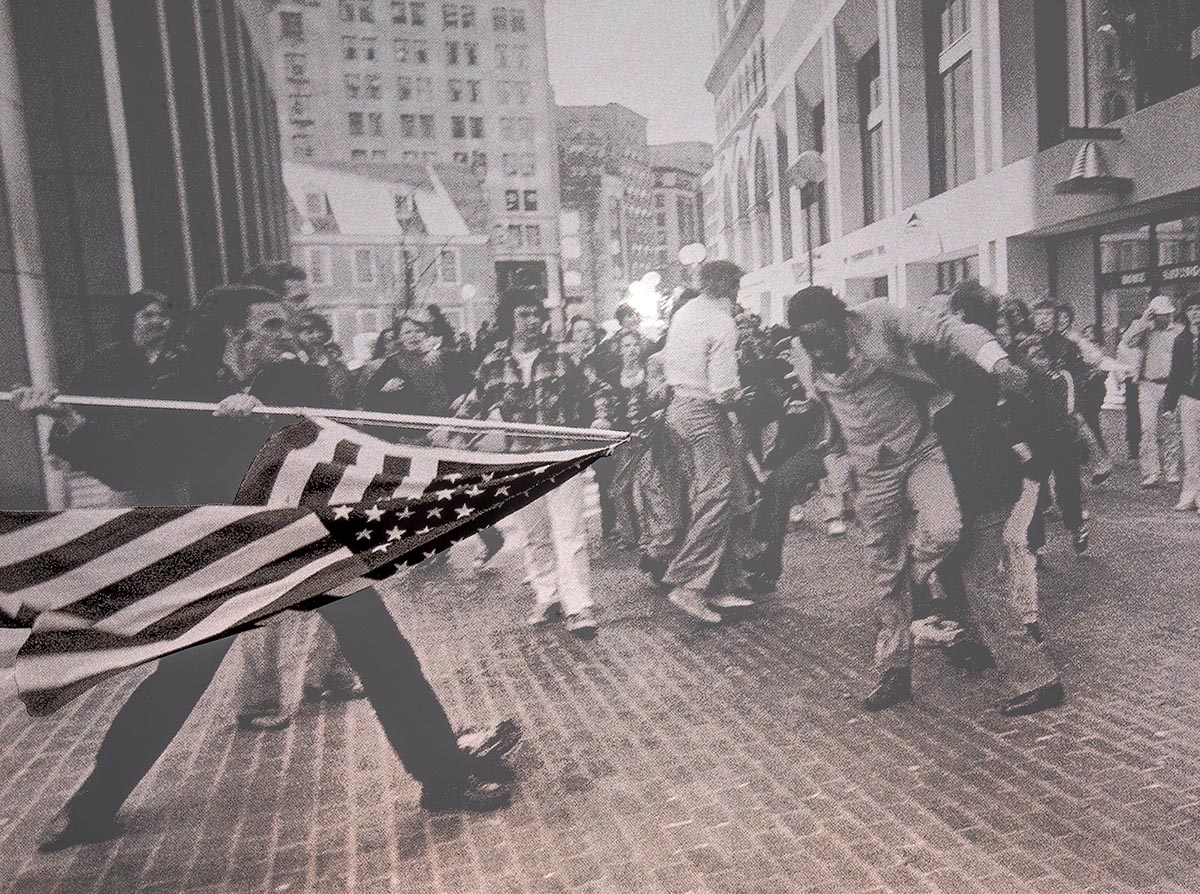 Nidaa Badwan’s100 Days of Solitude relies on preciseness in creating a classical image that appears in line with the history of Western art. Badwan employs rich tones, chiaroscuro lighting, and balanced compositions in self-portrait photography to document moments of her personal endurance into aloneness. The fruits and bins were functional for storage and sustenance during this 100-day self-sequestration, yet it seems they could have been plucked from a painting by Caravaggio. Badwan both appreciates and subverts this recognizable style by creating her own space and subject, thus freeing herself from the typical male gaze that dominated painting for centuries.

Seeing Now encompasses a range of images with a varied approach to seeing as an act of will. The show explores the use of technologies in art to alter the way seeing is possible and the way artists have presented concepts visually to illuminate pathways to questions and knowledge. Showcasing diverse perspectives of artists from around the world, the information that these works present to visitors may be difficult to approach emotionally, psychologically, and rationally, but they are worth the time and consideration. Each work provides space for thoughtful reflection about what you choose to see, what you have seen, and what you still may not be ready to confront. 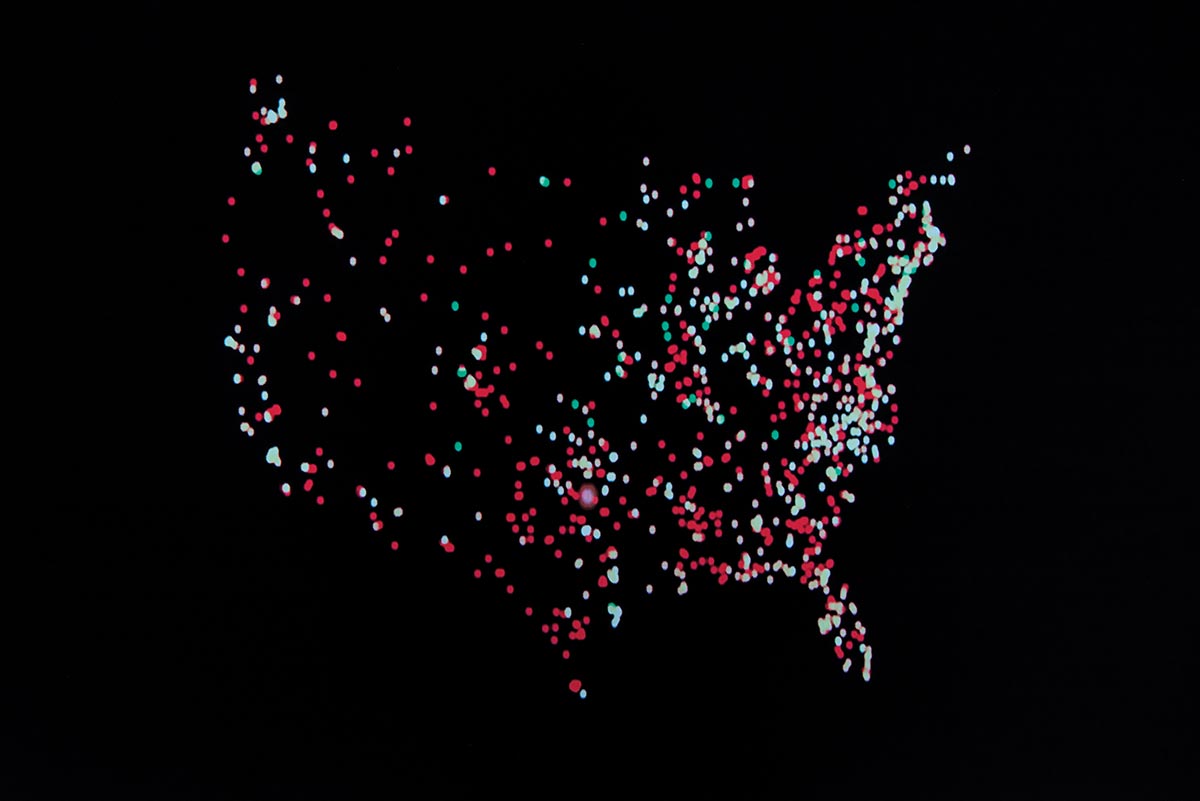 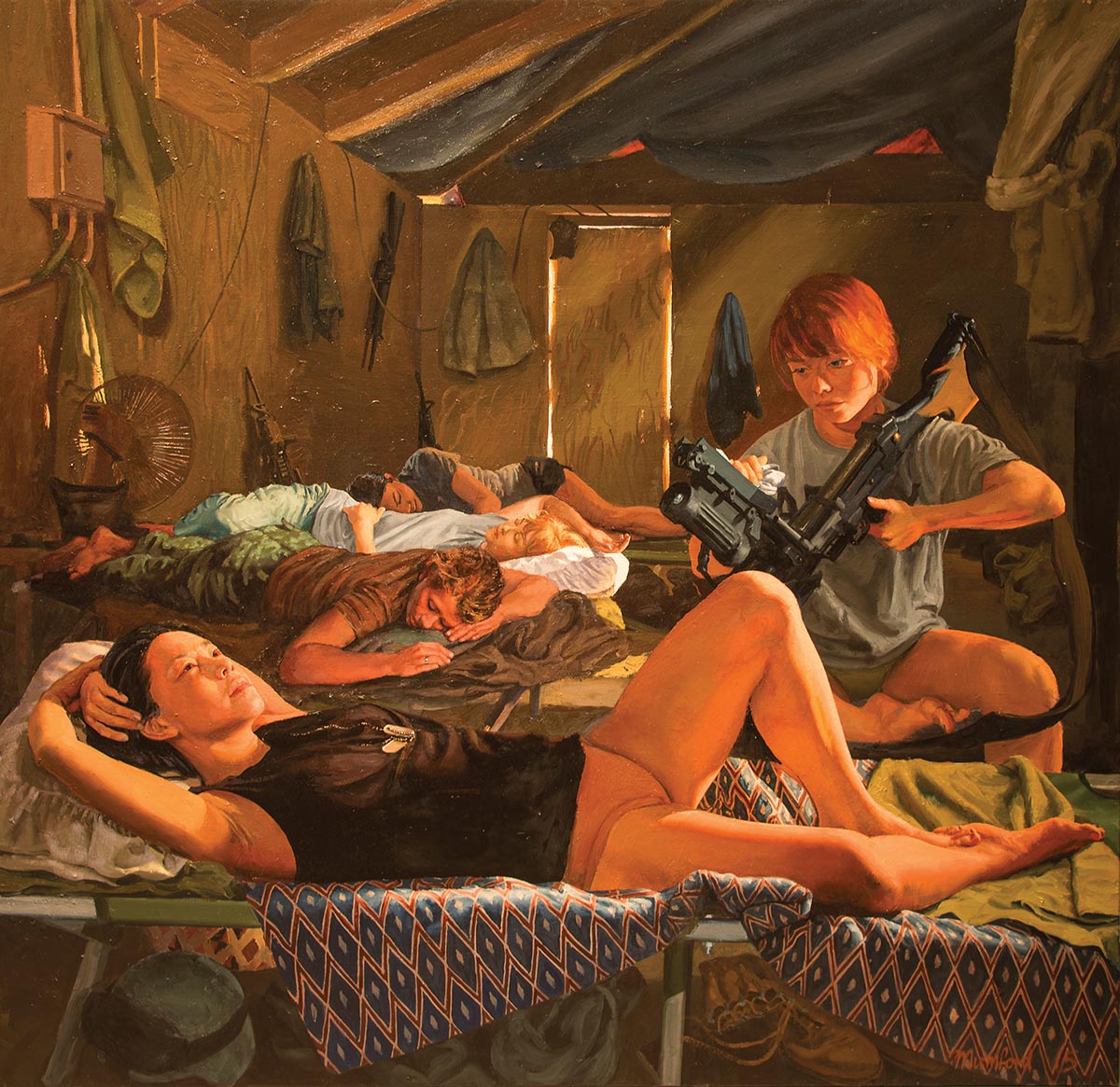 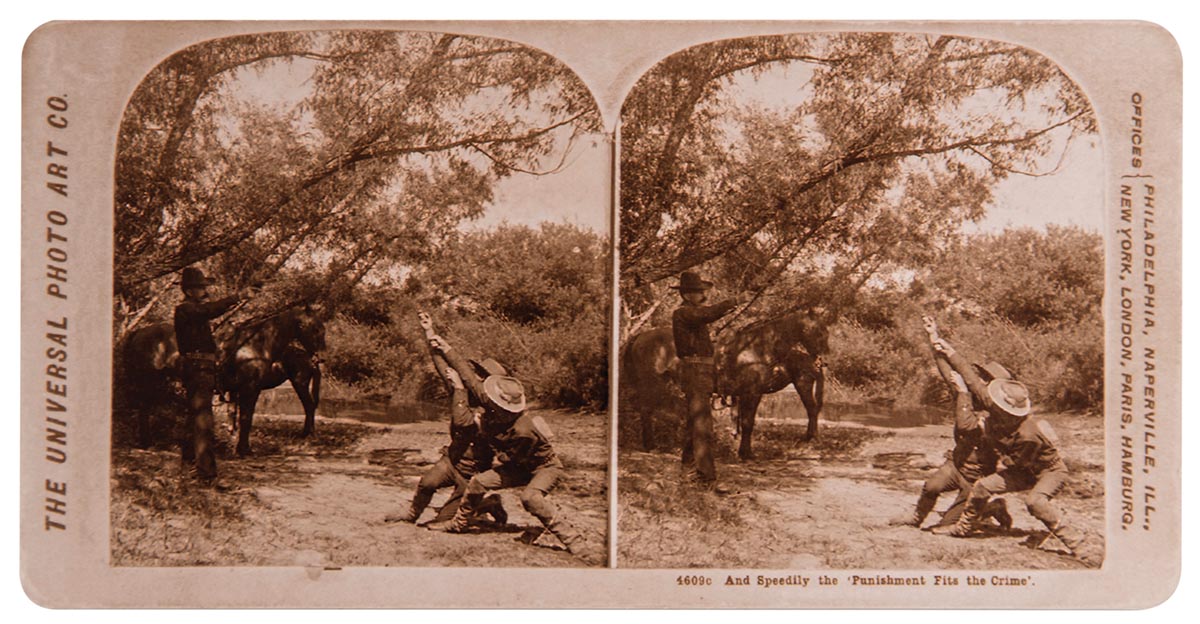 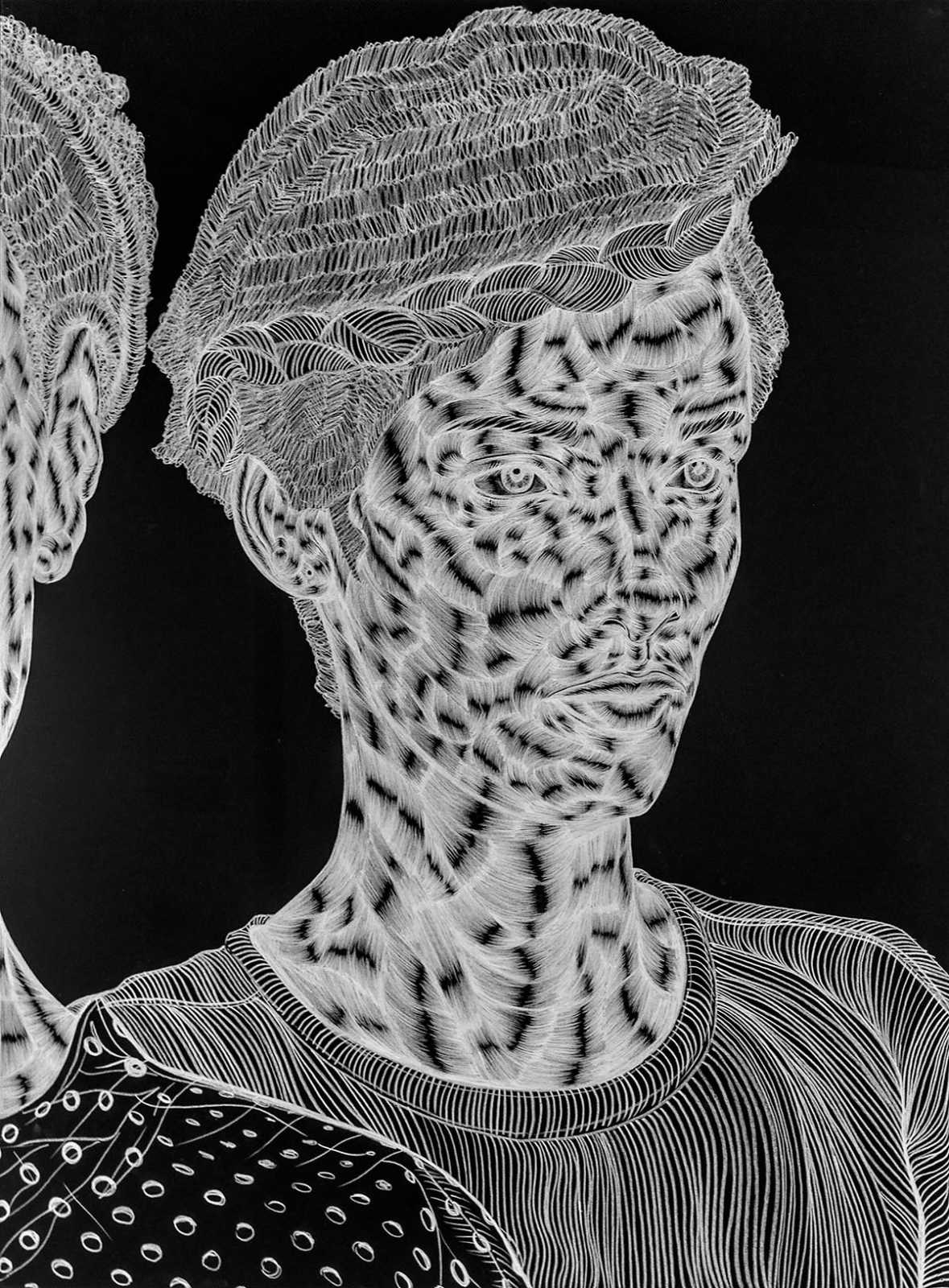