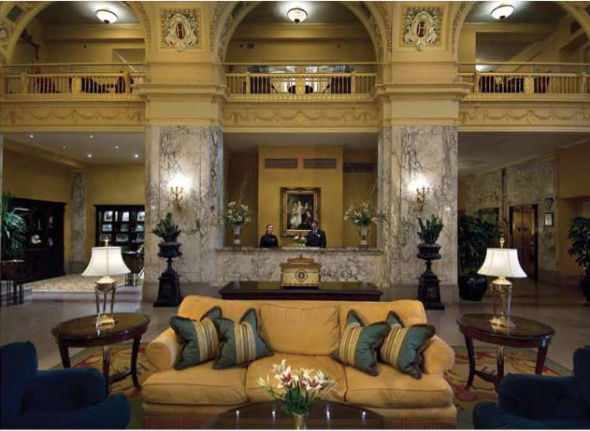 Ah, if only the walls of the Hermitage Hotel downtown would give up their secrets. Dinner parties for presidents, golden-age starlets of young Hollywood, mothers and daughters dining on the hallowed post-shopping lunch, honeymooners, high-society belles and beaux have filled the banquet halls and bedrooms of the grand estate for almost a century.

In September, the Hermitage toasts its centennial with a coffee-table book that celebrates its rich history as a cherished Nashville institution. Featuring detailed, gorgeous photographs taken throughout its history, the collection conjures up the hotel’s colorful past and boasts of its glorious present. 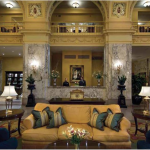 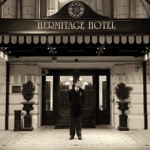 The Hermitage remains a building of both local and national importance. The hotel is included on the National Register of Historic Places and is a member of the Historic Hotels of America. The stories that have played out behind its walls have done so on the world stage. The structure is central to the spirit of Nashville. The city’s defining monument in the early twentieth century, it is still the location of numerous weddings and receptions. Many Nashville couples and families have begun their lives together in this establishment.

The Hermitage deserves its status as an icon of the Nashville skyline as much for what it is not as for what it is. The building casts a powerful relief against some of its less fortunate contemporaries that have fallen victim to demolition or destructive updates. The rare, original Art Deco structures of the Sudekum Building and the Tennessee Theatre were destroyed, only to be replaced with the hastily built stucco exterior of the Cumberland downtown.

At one time, the Hermitage faced a similar threat. The ‘70s, ‘80s, and ‘90s marked difficult decades for the once-glowing establishment. After closing its doors in 1977, the hotel was slated to be transformed into another downtown office complex. Through tumultuous years of the ‘80s and ‘90s the grand dame underwent several ownership changes and renovation upgrades. In June 2000 the Historic Hotels of Nashville, LLC, took over the fallen angel of Nashville’s heyday. The story of the rise, decline, and ultimate salvation of the Hermitage Hotel is one of romance, luck, imagination, and good old-fashioned grit and determination. In a way, it tells the story of Nashville itself as a city evolving and growing at the lightning pace of American history.

If one walks into the Hermitage today, a sense of the past permeates the living space of a bustling five-star hotel. Terra cotta-colored paint and Parisian blue accents bathe the interior in warm light. An original skylight restored to its former brilliance diffuses a palette of Venetian color. A rich oil portrait of a group of engaging young women invites one to converse with the past.

It takes little imagination to picture oneself in the exciting early years of the hotel’s life. One feels that train passengers should shuffle into the lobby from a foggy exterior, wearing mink stoles and cloche hats.

Founded in 1908 by 250 Nashvillians, the Hermitage was Nashville’s first million-dollar hotel. It soon became the symbol of thriving city culture downtown. Only the finest materials were employed in its construction. The Grand Ballroom, which saw the glittering white dresses of many a debutante ball, was paneled in Circassian walnut that sailed from Russian ports. Both Italian and Siennese marble graced the entrance. Glazed terra cotta lions adorned its exterior, and hand-cast plasters decorated its richly painted ceiling.

Hotel architect John Edwin Ruethven Carpenter was the first Tennessean to complete architecture school. He attended The University of Tennessee, Knoxville; the school now known as the Massachusetts Institute of Technology, and Les Ecole des Beaux Arts de Paris. Carpenter is famous for working in the Beaux Arts style named after the institution that he attended in Paris. This style, inspired by both classical and French Renaissance influences, features prominently among many American buildings from this era, such as Grand Central Station and the New York Public Library in Manhattan. Carpenter himself is most famous for his design of the 630 Park Avenue building that was considered to be the finest apartment plan conceived for the Big Apple.

When the doors of the Hermitage opened in 1910, it signaled a new chapter in the exciting city life of the developing Southern metropolis. “Meet me at the Hermitage” became the motto of Nashville socialites. The story of its early days is the tale of the early-twentieth-century American city. Malls and shopping districts were located in downtown areas. The Arcade in Nashville was the popular destination for mothers in smart new dresses holding the hands of daughters in tiered skirts and shiny new shoes. These excursions were often punctuated by a visit to the Hermitage for sandwiches and teas.

At night, young Nashville crowded the Oak Bar and Grille Room to dance to the tunes of the Francis Craig Orchestra. Craig, the man responsible for introducing Dinah Shore to American audiences, enjoyed a stint at the Hermitage from 1929 to 1945. His radio show was broadcast nationally by NBC.

Stars and starlets stayed at the hotel when in Nashville. Greta Garbo, Bette Davis, and Al Capone all spent nights on a Hermitage mattress. Gene Autry, dressed in his signature cowboy attire, famously lodged his horse at the fine establishment during a stay in the Music City.

The Hermitage boasts a rich political history. It was the site of suffragist battles when both pro- and anti-suffrage ambassadors made the hotel their campsite during the historic 1920 ratification. Tennessee Representative Harry Burn cast the deciding ballot that enabled women to vote nationwide.

Six presidents, including Taft, Franklin D. Roosevelt, Johnson, and Nixon stayed at the hotel. Memphis politico Edward H. (Boss) Crump, known as the Red Snapper of Tennessee politics, made the Hermitage his political headquarters. It became the home of the state Democratic Party. Events that took place at the Hermitage shaped the future of the American public. Roosevelt and his wife promoted New Deal politics while in Nashville; many of the programs supported by this strategy were ushered through Congress with the aide of Tennessee Senator Joseph W. Byrns. The hotel served as a headquarters for John F. Kennedy’s 1960 presidential run. While visiting Nashville, the would-be president addressed the city’s hopeful residents from the hotel steps.

As suburban sprawl began to take its toll on American downtowns, the city center that had once been the heartbeat of Nashville’s cultural life began to decline. Malls began to appear in outlying areas, such as Green Hills, and the hustle and bustle that defined the downtown Arcade began to quiet. During these years, the Hermitage finally closed its doors to a glorious past, signaling an end to an era and a sad trend in the fate of historic American buildings.

In 2000, Historic Hotels of Nashville, LLC, began a $17 million renovation of the long-neglected establishment. Their goal was not to rip down its Beaux Arts exterior in order to replace it with more contemporary material or to “update” its early-twentieth-century décor. They wished simply to return the landmark to its former glory while fulfilling the needs of contemporary Nashville residents and travelers.

The original plasters were painstakingly copied and recast for repair. Years of smoke and varnish were stripped from the Russian walnut. A palette of fresh paint was selected from the richly colored skylight that adorns the capital of the lobby. Bedrooms were gutted and updated.

The result is Tennessee’s only AAA Five Diamond and Mobil Five Star Hotel. Featuring spa services, televisions in suite bathrooms, and a myriad of modern accommodations, the Hermitage remains true to its heritage as the city’s luxury hotel establishment. The hotel restaurant, the Capitol Grille, has been named a AAA Four Diamond restaurant and was lauded by Gourmet magazine as one of America’s best restaurants in 2004.

With September signaling the centennial year for Nashville’s grande dame of hotels, the Hermitage looks back at its exciting and diverse history. The only commercial Beaux Arts building remaining in Nashville, it is a landmark of the city’s architecture. Returned to its former glory, the old building continues to shape the lives of Nashvillians just as it defined the experiences of generations past. A visit for tea, a dinner at the Capitol Grille, or a much-needed “staycation” at the hotel should be penciled in on the calendar of any proud Nashville resident this year.