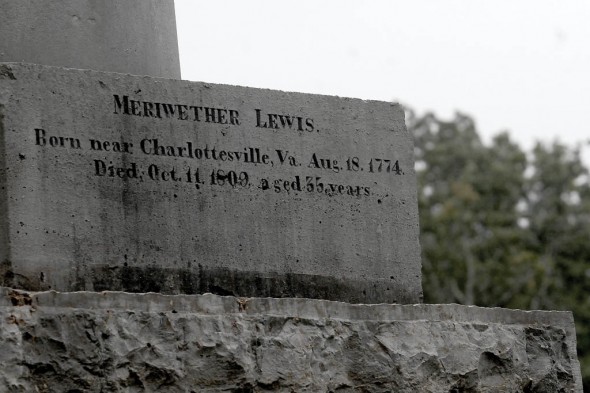 On October 7, 2009, national press, locals and tourists will descend on Hohenwald, Tennessee, to commemorate the 200th anniversary of Meriwether Lewis’ death and, for the first time in history, to honor this true American hero with a national memorial service.

The commemorative event begins at 2:30 p.m. at the Meriwether Lewis grave and monument at milepost 385.9 on the Natchez Trace Parkway and just off Tennessee Hwy. 20 in Hohenwald. The ceremony will tell Lewis’ story as a real man who personally sacrificed for his country. Eulogies written in the style at the time of his death in 1809 will be given. Descendants of both Lewis and Clark, government officials, tribal chiefs, representatives from Monticello, and historical reenactors will assemble to honor his achievements. The event will not settle the question of how he died, but it is hoped that it will complete unfinished matters left since his premature death at age 35 and give the national hero’s life the recognition it is due.

Although Lewis was governor of the Upper Louisiana Territory at the time of his death, he was not afforded the honor of a funeral, and for most of the nineteenth century his grave was described as abandoned and overgrown. A group of Tennesseans encouraged President Coolidge to designate the grave the fifth national monument in the South in 1925; in 1961, President Kennedy made it part of the Natchez Trace Parkway. Today, the site draws visitors from around the world, and the Park Service has announced plans to begin construction of a four-million-dollar visitors center.