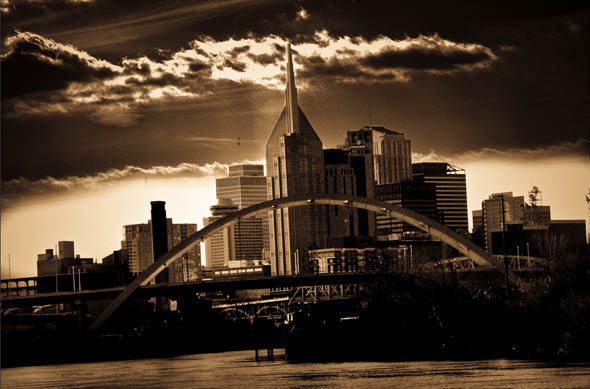 Leonard Cohen World Tour, 2009  Nov. 5,
TPAC – Andrew Jackson Hall
To the delight of his legions of fans, Leonard Cohen will once again return to the U.S.—and to TPAC’s Jackson Hall—this fall for the final leg of his critically acclaimed 2009 World Tour. Since taking the stage earlier this year at New York’s Beacon Theatre, his first stateside performance in more than 15 years, Mr. Cohen has enchanted audiences, earning rave reviews and sold-out concerts across the globe. While the acclaimed singer/songwriter/poet is currently dazzling crowds across Europe, his fall return to the U.S. will mark the final engagements of the intimate, superbly crafted concert tour.

Art After Hours, Nov. 5, Nashville Association of Art Dealers (NAAD)
Art After Hours, Nashville’s first monthly citywide art event, seeks to elevate awareness and support for the visual arts in Nashville. On the first Thursday of each month participating galleries and museums will be opening and previewing new shows and presenting art talks with insightful discussions.

Music for a Cure, Nov. 7, 12th and Porter
Join us for an evening featuring performances by Halfway to Hazard, Kaci Bolls, Joshua Armstrong, 74 Southbound, Brian White, Jamie Floyd, Pete Sallis, and many more.

First  Saturday Gallery Crawl, Nov. 7
Nashville Downtown Partnership
Every first Saturday of the month, multiple downtown galleries open their doors to avid art lovers as well as anyone else who is just curious to see what the Gallery Crawl is all about. Over 1,000 people attend this very popular monthly event. Most galleries serve free wine and other refreshments, and the Nashville Downtown Partnership provides a free shuttle between galleries. Participating galleries subject to change.

Hansel and Gretel, Through Nov. 7, Belcourt Theatre
Olde Worlde Theatre presents a not-so-grim fairy tale, retelling the adventure of Hansel and Gretel Schnitzel. It’s a timeless classic of hunger and hope, cruelty and courage, life and love. When the family unexpectedly falls to hard times, Hansel and Gretel’s journey begins. Our heroes then learn how to be resourceful, cooperative, and grateful for what they have. Please come and enjoy mime, movement, colorful characters, special effects, and dynamic music, as Olde Worlde unfolds an interactive extravaganza for all ages. Everyone is invited to dress in costume for all performances!

Victorian Christmas: A Celebration of a Century…1899
Nov. 7 – Dec. 31, Belle Meade Plantation
Learn how excited and optimistic Amer icans were in 1899 to see the dawn of a new modern age. As you tour the Belle Meade mansion this holiday season you will become a guest of William and Annie Jackson as they host a party celebrating the end of one era and the beginning of another.

MUTEMATH, Nov. 8, War Memorial Auditorium
In the wake of the announcement of the long-awaited release of its new studio album, New Orleans rock innovator MUTEMATH announced its Fall 2009 ARMISTICE Tour in support of the band’s second album for Teleprompt/Warner Bros. Records.

Soldiers’ Chorus of the U.S. Army Field Band, Nov. 12 – 14
Schermerhorn Symphony Center
For more than half a century, the Soldiers’ Chorus has traveled the world, serving as musical ambassador for the U.S. Army. With their diverse backgrounds, the 29 members can sing a wide range of music with gusto, and their show promises an inspiring mix of Broadway, opera, classic American songs and choral music.

Emergence: The Studio Series, Nov. 13 – 14
Nashville Ballet Studio
Nashville Ballet’s biennial event Emergence! is being transformed in 2009/2010 into Emergence: The Studio Series. Imagine the up-close-and-personal thrill of sharing the studio with our electrifying dancers performing a program of intimate, eclectic favorites and fresh discoveries.

Christmas Village, Nov. 13 – 15,
Tennessee State Fairgrounds
Christmas Village, known as a premier consumer show in the Southeast, features exceptional items from more than 270 merchants from all over the U.S.

The Fall of the House of Usher, Nov. 13 – 15
James K. Polk Theater
Based on the famous story by Edgar Allan Poe, composer Phillip Glass has crafted a chamber opera of great power and emotion. As the opera begins, William, our narrator, is summoned to the House of Usher by his long-time and long-lost friend, Roderick Usher. Once there, as the dark secrets slowly unfold, William begins to fear for his friend’s life and for his own sanity. Danger, eroticism and potential murder hang in the air, or is it all an illusion? This operatic thriller is a Nashville Opera and Tennessee premiere, and one not to be missed.

Artrageous, Nov. 14, Tour of Local Art Galleries
This evening marathon of art held at some of the city’s finest art galleries benefits Nashville CARES. Voted one of the South’s best parties, it’s an event not to miss for the art lover and the partygoer!

Christmas Belles
Nov. 19 – Dec. 31
Chaffin’s Barn Dinner Theatre
From the authors of the 2008 smash hit production of Dearly Beloved comes another hilarious Futrelle sisters tale. This is one bumpy sleigh ride full of hysterical mishaps guaranteed to cause uncontrollable laughter!

Radio City Christmas Spectacular starring The Rockettes
Nov. 20 – Dec. 27
Gaylord Opryland Resort and Convention Center
The Radio City Christmas Spectacular® starring the world-famous Rockettes® returns to Nashville with dazzling scenery, costumes and lighting, as well as a cast and crew of nearly 100 members. In addition to the Rockettes showstopper 12 Days of Christmas, this magical production features the legendary favorite Parade of the Wooden Soldiers and the awe-inspiring Living Nativity. This exciting holiday event is a must-see for the entire family!

A Christmas Story
Nov. 21 – Dec. 19
Andrew Johnson Theater
Based on the motion picture, A Christmas Story is humorist Jean Shepherd’s memoir of growing up in the Midwest in the 1940s. This irresistible piece of Americana is a cult classic and is guaranteed to warm the heart and tickle the funny bone.

Alexander and the Terrible, Horrible, No Good, Very Bad Day
Through Jan. 3
Nashville Children’s Theatre
Alexander knows it is going to be a terrible, horrible, no good, very bad day when he wakes up with gum in his hair, and he is right! Things only get worse as the day goes on: his best friend bails on him, there’s no dessert in his lunch bag, there’s lima beans for dinner and kissing on TV! The only reasonable response is to move to Australia. Judith Viorst adapted her own award-winning children’s book into a marvelous musical that is wacky, wild, and wonderfully wise!