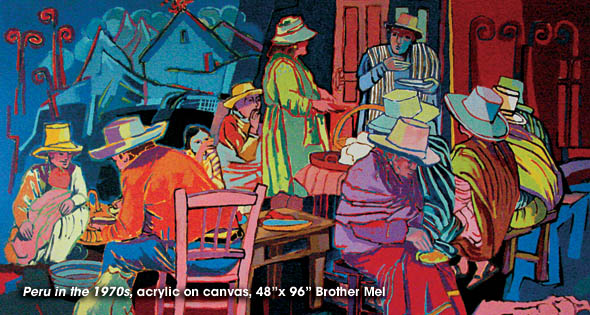 We were all saddened to hear of the passing of artist Brother Mel. Our Editor Paul Polycarpou was fortunate to have been with him on several occasions and was always struck by his tenderness, his compassion, and, of course, by his enormous talent. Here was an artist who could see the beauty in a simple object, a spoon, a fork, a coat hanger, and create masterful sculptures using them. His colorful paintings have a childlike quality to them that is both playful and compelling. You simply couldn’t help but smile when you saw them. His life, just like his art, was a celebration.We featured Brother Mel in an article titled “A Life in Color.” You can read it now.

This month Nashville Arts Magazine traveled to St. Louis, Missouri. We visited the studio of nationally renowned artist Brother Melvin Meyer. Many readers will recognize Brother Mel’s name and work from numerous downtown Nashville buildings and from his prominent place in The Arts Company collections. The thriving relationship between Brother Mel’s studio and the Music City began by chance years ago.

The Arts Company owner, Anne Brown, stumbled upon Brother Mel’s work while visiting a friend in St. Louis. Brother Mel had never sold work outside of his own gallery, which is run by the Marianist community to which he belongs. He was at first reluctant to exhibit his work in another location in spite of Brown’s intercessions. Eventually, Brown relates, “a relationship and a friendship of trust” developed between them, and Nashville has been a more colorful city ever since.

Brother Mel, as his name implies, belongs to a Catholic order called the Marianists. A teaching order, the Marianists believe strongly in living in the world and engaging others through their community as educators. Preferring to be called “brothers” instead of “monks,” they encourage study of the arts and literature. Brother Mel joined the Marianists at age 19 after attending one of their high schools in St. Louis. He considers his affiliation with the order to be a providential one, since his religious life through the Catholic Church has determined the arc of his career as an artist. 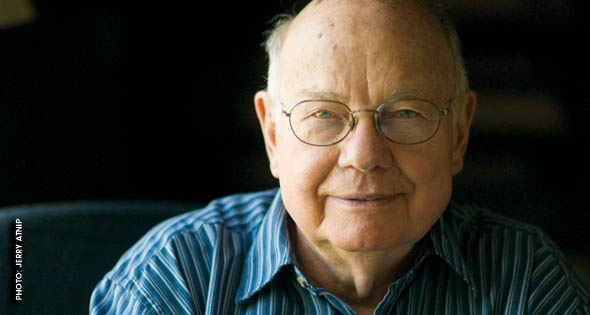 “Art is not easy work. Art is an everyday, all-day work”

This December, Brown will launch her monograph on Brother Mel at The Arts Company. She, too, credits his involvement with the Marianist community as the defining element of Brother Mel’s work.

After years of familiarity with the artist’s paintings, sculptures, and mobiles, Nashville Arts decided to introduce a more intimate portrait of Brother Mel by taking readers to his own territory. The bright colors, simple designs, and powerful emblems of his art had done little to prepare us for the whimsical yet humble environment that we encountered. A day spent in Brother Mel’s studio seemed to be a day snatched from time, a brief interlude in a less-complicated universe. Brother Mel’s gentle spirit and calm demeanor seem to have modeled the people and places around him into a community in which even strangers feel at home.

Driving into the Marianist campus, visitors are welcomed by a tall, freestanding sculpture of a sleeping boy. Reclining with his arms folded behind his head, one ankle lazily resting on the opposite knee, this figure prepares curious travelers for the unexpected playfulness that hides behind the campus walls. Passing the high school for boys and community chapel, one arrives at Brother Mel’s self-assembled studio. A dark wooden structure, it is situated in a veritable playground of a sculpture yard. In a small garden outside the door, Brother Mel has planted his own metal sculptures of painted steel flowers. They pop up from loose soil alongside real marigolds and grasses. 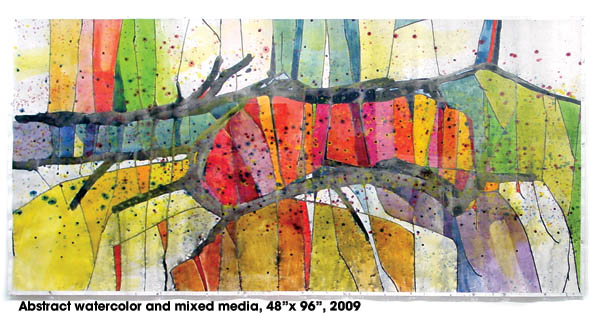 Inside, one finds a gallery that is reminiscent of Willy Wonka’s factory. Vivid colors, swirling mobiles, an open, spiral staircase enliven a bright and busy space. One feels prepared to meet the eccentric magician or carnival master who presides over this fantastic, colorful realm.

Then, out steps Brother Mel. A quiet, white-haired man of 81, he paces slowly from his workshop. Uncomfortable talking about himself and eager to get back to work, he is serious, sweet, and accommodating. “Art is not easy work. Art is an everyday, all-day work,” he says, “I would rather be working than sitting. Art is not about talking.” The surprising element about meeting Brother Mel is his quiet, humble manner. He has heart problems and must walk slowly, intentionally. He has experienced tremendous loss in the death of family members and two of his beloved assistants. He is emotional and caring. Two years ago, he was summoned back to St. Louis from travel because of the death of a close friend and work assistant. He says of his five-hour drive home, “I cried every minute of the way back for over five hours.”

Brother Mel’s studio overlooks the community graveyard of his Marianist order. In it, colleagues are buried alongside monuments to friends and the ashes of a former student that Brother Mel himself placed in the ground. It is a sobering environment punctuated by the Stations of the Cross welded in steel by the resident artist.

-“Art is an outgrowth of what the person is. I’m a happy person. The feeling of being happy finds its way into the art.”

Anyone familiar with Brother Mel’s art is aware of his colorful guitars and polka-dot bicycles. They also know his broken, tortured, elemental crucifixes. Brother Mel presents the paradox of personalities that breathes life into such complex and diverse images. He is kind, jovial, happy. His twinkling eyes and slow laughter infuse his world with a beatific glow. Yet he is world-wise, experienced, receptive to the sadness and sorrows of others. These strata of his psyche make Brother Mel a complicated, rich individual and lend him an emotional maturity that gives his art character and soul. He claims, “Art is an outgrowth of what the person is. I’m a happy person. The feeling of being happy finds its way into the art.”

Brother Mel can boast of an artistic training and heritage that few other artists in Nashville or even the world might be able to claim. While completing his M.A. in art at the University of Notre Dame, he took courses with Jean Charlot, a master of the Mexican Renaissance muralist movement who worked alongside Diego Rivera. He sculpted with Croatian master Ivan Mestrovic, the first living person in history to have a solo exhibit at the Metropolitan Museum of Art in New York.

After completing study at Notre Dame, Brother Mel began a Grand Tour of Europe on a motor scooter. He exclaims, “Now that was an education, believe me!” While in France and Switzerland, Brother Mel studied stained glass art with Jacques le Chevallier and Yoki Aebischer, both innovators of modern geometric and expressive techniques in religious art.

These teachers, along with his natural instincts and prerogatives, define Brother Mel’s formal vocabulary to the current date. His powerful geometric patterning and intense coloration speak to his pedigree as an artist trained by masters of twentieth-century modernism.

A lover of Cezanne, Picasso and Van Gogh, he speaks intelligently and expertly about art. “Some of Cezanne’s apples,” he says, “are more religious than a crucifix.” He admires the personal and artistic endeavors of these painters, claiming, “They are dynamic, as I would like to be.”

Brother Mel is prolific, to say the least. He and his assistants Greg, Lyn, and Brother Brian get to work every morning at 8 a.m. Break for coffee at 10 a.m. Lunch at 12 p.m. Break for coffee at 3 p.m. Leave work at 4 p.m. Clearly a product of his monastic lifestyle, Brother Mel’s strict schedule provides rhythm to a life devoted to hard work. He has a bedroom at his studio and often sleeps there. Taking us to a warehouse, he displays a collection of over 300 paintings kept in storage. Back at his studio, a drawer system holds over 400 watercolor paintings.

Near his workshop, the campus chapel features Brother Mel’s elaborate stained glass window, floor-to-ceiling handmade tapestry, and an altarpiece fashioned from steel rods that were used in the production of bullets for the Vietnam War. The juxtaposition of the hard, black steel of the altar against the soft, hot pink and coral hues of the tapestry is startling. The whole environment is bathed in red and blue light from stained glass that is curiously situated behind a honeycomb concrete façade. The space, like its artist, is defined by unexpected pairings and small yet significant details.

Back at the studio, a group of grade school children arrive for a tour of the gallery and workshop. One can hear them behind the front door speaking in quick and excited tones—they have the energy of bulls behind the gate waiting to stampede. Suddenly, in they rush. The air is full of exclamations: “Wow!” “Whoa, I love colorful art!” “Look at these chairs!” “I like the spirals!” The pounding sound of children running upstairs, rushing, happy seems somehow appropriate to this space. It would prove difficult to locate another gallery where a group of children might have so much fun and find so much to talk about.

Outdoors, they sit in circles around sculptural installations. Eating bag lunches at the bases of sophisticated contemporary art, they seem quite at home. Many of the metal sculptures are fitted with moving parts, so their spare geometric components spin in the breeze. They glimmer in bright flashes, catching sunlight. They make the familiar, dulcet sound of park swings at a childhood playground.

Looking out at the noisy herd of laughing children, surveying the humble graveyard just beyond them, one senses the full scope of Brother Mel’s creative life. He makes a simple art. It is buoyant, childlike, alive. It is also a serious art that takes place in the hallowed spaces of real experience and true imagination. Simply put, it is an altogether human endeavor. 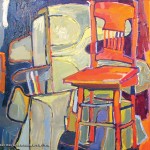 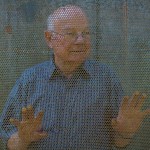 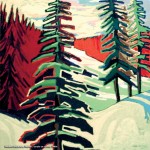 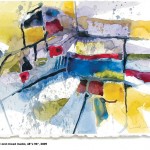 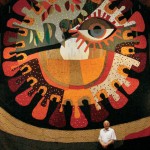 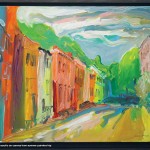 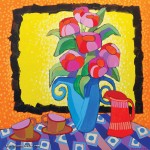 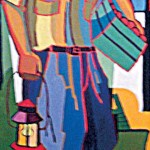 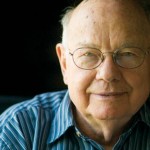 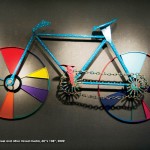 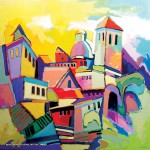 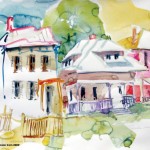 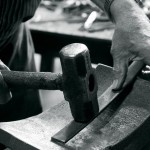 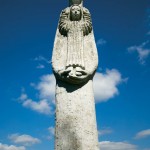 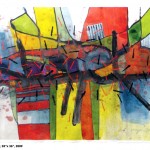 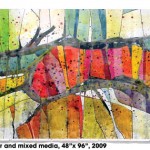 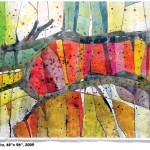 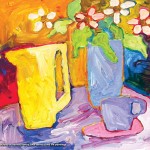 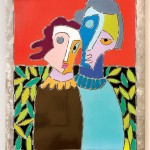