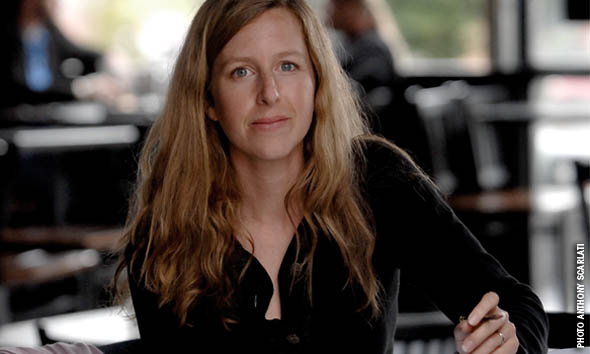 For Lydia Peelle, the South is a place where the past crowds the present. She is curious about the lives that came before. Who were the people that once lived in her house? What are the histories of people she passes on the street? What lives were lived in an old abandoned farmhouse?

Peelle’s award-winning collection of short stories, Reasons for and Advantages of Breathing, is rooted in Tennessee soil, populated by characters that she has imagined into life by walking the land and researching the past, not as a native but as a Northern transplant. Desire for understanding and connection compelled her to write her way into making Tennessee home.

“I’m drawn to a rural way of life because I’m interested in the intersection between domestication and the wild. A farm is considered a domesticated place, but it’s where you can still see a hawk out in the field and the cardinal it killed on the top of the big hay bale—and you know there are snake skeletons out there.

“So much of my identity as a writer was developed in childhood by hiding away with a book and creating my own space. I think if you want to write, you have to do that. You have to separate yourself from your family and the people you love. You have to be an observer of all aspects of your life.”

In Shadow on a Weary Land, Peelle’s protagonist, a middle-aged man, is living in the outlaw Jesse James’s house built in 1875 on Brown’s Ridge outside Nashville.

Some nights I think I can feel Jesse’s bootsteps if I lean off my mattress and press my fingers to the floor, but it is only the rumble of the trucks coming down the Pike. Living in a place like this, you would think it would be easy to start believing in ghosts. But I am haunted by something more real than ghosts. Behind the Minute Mart, on a scrubby lot where the gas trucks turn around, two perfect rows of daffodils come up year after year, just wide enough to line the drive of a farmhouse of which there is no longer a trace. Whoever planted those daffodils, a woman, I picture, in a homemade dress, did it decades ago, without any thought of me.

Peelle is a researcher. To create authenticity, she reads periodicals and books, listens to early American jazz, the blues, folk and mountain music—studying and absorbing until she is sufficiently immersed in another world.

“It all just combines in my head, creating people and narrative, without anything being based on specific events or facts. In many of my stories I write about the natural world, but for me, all the heat comes from the humans and their conflicts and the push/pull of nature. I was once given a piece of advice—you should write your first draft and then do your research. Meaning, the truth emerges in fiction from what you invent, not from the accurate portrayal of real situations.”

All writers have a process they use to discover their stories. Some writers know the end before they begin. Some painstakingly outline and take copious notes. Others start with nothing more than an image or a voice in their head speaking to them. Peelle begins when she gets a character or an idea and wants to see where it’s going.

“I’ll think, let me see who this character is and what will happen to her. Once the story tells me its direction, I can go back and push it further. I don’t outline, but I do a lot of writing to learn about my characters’ psychologies, their beliefs, and how they see the world.”

Peelle sees writing as a daily practice much like some people do yoga or meditation. It is necessary to her well-being, even when it’s the last thing she feels like doing. “I’m the kind of writer where the birth of it is difficult. I can’t say that I’m ever excited about sitting down at my desk. There’s a long period where I’m thinking about all the other things I’d rather be doing. But once I’m really into it—and that certainly doesn’t happen every day—I just forget myself. When I go back that evening and reread, I think wow, I don’t even remember writing this! It’s very difficult for me to get to that place of transcendence. And when I’m there, it probably lasts only about 25 minutes!”

Many writers find the first draft exhilarating. It’s when the material rockets onto the page uncensored. But it can also be the most inchoate, when the story is so embryonic and characters so unknown that there are moments when the author asks, what am I doing? Where is this going? Does it make any sense?

Inexperienced writers hate revision. An ongoing challenge for teachers in writing programs is getting students to understand its value. There are veteran writers who prefer revision to the first draft because it is where the gold emerges. Call it polishing; see it as an intellectual puzzle or as the iterative stages of perfecting the whole. Revision is, in truth, a writer’s sharpest tool.

“It can also be so paralyzing, deciding on which word, or word sequence, I choose. There’s also the realization that if I do it this way, make this choice as opposed to another, it is fixed and will never be read differently.”

Peelle has eight beautifully realized stories in Reasons for and Advantages of Breathing and confesses that there are probably 12 stories in a box that didn’t make it into the book. Some of these she has worked on for years. How does a writer know when it’s time to give up and move on? Do these stories ever become the genesis for something else? Will they be resurrected at some point in the future?

“I guess the way I think about it is that I haven’t completely given up hope on them. I always think that someday I’ll go back, but in all probability that will never happen. Sometimes I think that maybe I wrote that whole story for one thought to coalesce in my mind. I think of it as part of a big compost heap for something else. But it does feel sad when I arrive at a point where I know I’m done with a story. It feels like they’re people that I’m abandoning.”

There are a number of reasons a story doesn’t work—plot weaknesses or the underdevelopment of characters, for instance. Sometimes it’s a failure of courage—the story is touching on a scary or sad place the writer doesn’t want to explore. For Peelle it’s a matter of voice. Just like a musician searches for the right note, Peelle is listening for the truth of her character’s voice on the page.

“By the seventh draft, if I still haven’t nailed that overriding voice then I know it’s failing. My characters have to become whole before the story moves. That’s why I write so much and throw it away. For each paragraph, I might write dozens of pages. Each character’s psychology has to be fleshed out in order for me to distill them onto the page. But that is also one of the pleasures of writing—seeing the world from multiple points of view.”

She expands on her writing philosophy, “We didn’t choose to be born, but we are all obligated to engage with each other and engage with our place in the world and with nature. I hope that my stories will inspire people to be involved with their own sense of place, wherever that may be. I want people to ask themselves what happened here 25 years ago, 100 years ago, and then experience what that means to them in the present.”

In all her stories, Peelle illustrates how the past informs, even invades, the present and reminds us that the future is merely the progression of every today. Her layered portraits of human lives, time, beasts, progress, nature and place are all part of the story—and all stories are our own.