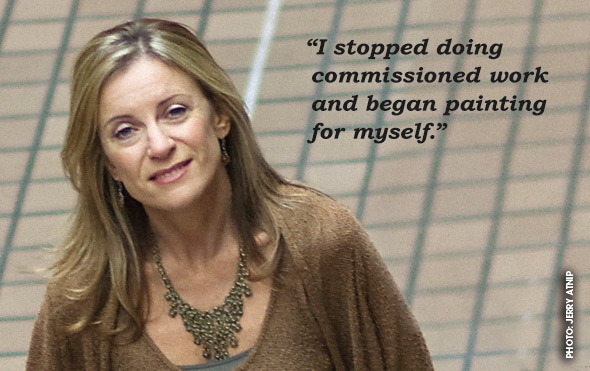 Ronell Venter is a storyteller. With words, music and paint, she creates vivid narratives. Her art, perhaps, imitates her life. Venter’s journey as an artist is as full of adventure as one of her imaginative screenplays or active landscapes.

A petite blonde with a soft voice and a cheerful laugh, Venter smiles constantly. She is serious, ambitious, but just like her paintings, she has a sense of playfulness in her character. Her journey as an artist began as a child. A native of South Africa, she claims her childhood was idyllic. Her mother was an artist and an opera singer, so creativity and imagination filled her early days. Venter’s family owned a farm outside the city that they visited on weekends. There, they churned their own butter, raised animals, and passed long days in an innocent, simple world.

When looking at Venter’s paintings, one catches a glimpse of the spirit of her early Arcadian summers in South Africa. “I always wanted to paint bliss,” she says. In her painting White Dress, a little girl dances playfully in front of an old country white church. Her arms outstretched, one toe pointing, she strikes a carefree pose, mid-twirl before the viewer. The triangular composition of the canvas with its sturdy tree, lone church, and young figure is harmonious and balanced. Its organization seems to put the onlooker at ease. In White Dress one finds a moment of windswept childhood happiness before longstanding monuments of strength and stability. The painting is blissful at the same time it is mature. One can sense in it Venter’s childhood love of the country and her efforts to capture innocence and beauty in her work.

Venter was inspired to paint White Dress when driving through the country in California. A heavy mist hung over the landscape that just obscured an old church from her view. The moment struck her. She captured it in a photograph and, on her return home, transformed it into a simple yet powerful oil painting. This process typifies Venter’s work. She often takes photographs while traveling and later translates them into dynamic canvases.

Travel has also characterized Venter’s life. Attracted to the television and film industries, she moved to Johannesburg after college and became a news editor with the South African Television Broadcasting Corporation. She left her job in news for another more lucrative position, but her employer soon went bankrupt. Where others might have felt defeated or returned home, Venter saw this turn of events as an opportunity. She sold her car for just enough money to buy a plane ticket to the United States. She had friends in Texas with whom she could stay but had no prospects of a career in the States.

At age 23, she landed in the U.S. with $135 in her pocket and the belief that she could paint commissioned artwork for money. She was right. She sold a painting and flew to Florida where she could again stay with friends. Once there, she produced another commissioned work for enough cash for a plane ticket to Los Angeles. Venter had begun to dream of living in California in order to work in the film industry. She hoped to get involved with a major studio, but she again had faith that her artwork could see her through any lean times.

In California, she began working as a teacher and used painting to supplement her income. A gregarious, hardworking person, she soon made friends with luminaries of the film and design worlds. She completed numerous commissioned paintings for major design firms in Los Angeles. Venter also began traveling between Baltimore and Los Angeles for a series of murals in the home of one of her patrons. As she realized continued success in her painting career, she became more active in the film industry. She started working as producer for DreamWorks Studios. With a national portfolio and a career in film, it seemed that she had everything.

After completing her murals in Baltimore, Venter took a fateful trip to Italy. The journey, she claims, transformed her. “I stopped doing commissioned work and began painting for myself.” Venter claims that throughout her career as an artist up to this point she had painted only for others. With new clarity about her artistic vision, she took a chance in pursuing themes and subject matter that spoke to her personally. Her new work was an instant hit.

Venter’s first painting in her new style was drawn from a photograph of a stranger on her trip to Italy. A young baker standing outside his family shop, he looked in at the store window and seemed to contemplate and question his place in the world and his future. Soon, Venter found herself in a similar mode of introspection. Her project with DreamWorks’ Evolution by Steven Spielberg had not been a success. Rather than give up, Venter began to contemplate life choices that would make her happy.

She turned to Nashville. Now a mother with a young son in tow, she finds the pleasant pace of her life in Tennessee conducive to her creative needs and her family’s well-being. Venter opened Ronell & Co. Art in the Arcade downtown where she sells her paintings and maintains a studio.

She recently completed a painting that hangs in her gallery downtown. A study of a familiar Nashville monument, it features her young son kicking his soccer ball down the sunlit colonnade of the Parthenon in Centennial Park. The painting is all rigid geometry, angles, and perspective except for the playful figure of the young boy. “I love a structural setting—the balance that it represents. In a structural painting like the Parthenon, children bring a lot of movement.”

Venter shows her instinct for art by the dynamic pairing of the static architecture and the free movement of the young child. The contrast also represents the dual forces at play in her life and work. When presented with walls or roadblocks in her career, her free spirit and innate hopefulness have helped her keep moving. An ambitious dreamer, she is a planner, a networker, and a good businesswoman. She is also warm, fun, and creative in her approach to the world. Speaking of the innocence and mystique of her rural paintings, she may well be describing that special spark that defines her personality: “It’s magic.” 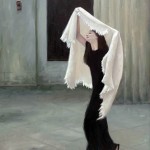 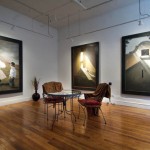 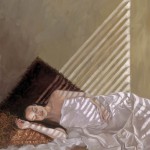 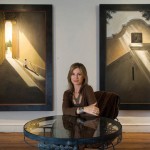 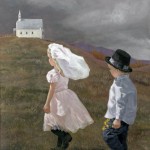 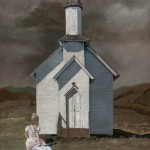 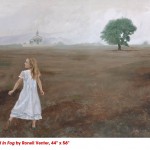 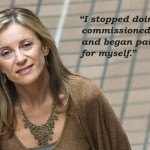 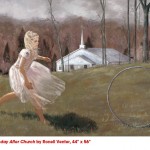 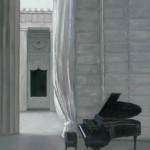 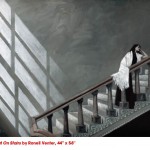 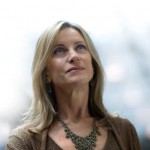