Composed of glass beads, trade cloth, and native tanned hide.
This panel belt with matching pouch is one of many beadwork items that descended in the family of a Hardin, Montana, trading post owner. The trading post, which was operational until the late 1960s, was located near the Crow, Rosebud Sioux, and Cheyenne Indian reservations and fifteen miles from the Little Bighorn Battlefield, also known as the Custer Battlefield.

The materials, construction techniques, and the design elements point to a tribal attribution of the Northern Plains Santee Sioux.

The Native Americans of the plains and prairies occupied the area of North America that extends from west of the Mississippi River to the Rocky Mountains, as well as from the Saskatchewan River in Canada to Middle Texas.

In the years before European contact, decoration was native paints, shell, and porcupine quills. Quillwork was considered a sacred tribal art. Plains women formed elite societies around the practice. It was not until the mid eighteen hundreds, when glass beads became more prevalent, that designs began to change in any significant respect. Early beading followed the same basic patterns as early quillwork. When the abundance of European glass trade beads made their way to the Native Americans of the Plains, their bright colors and smooth, lustrous surfaces had an irresistible appeal to the native people who were accustomed to the more-muted tones and duller surfaces of natural objects and materials.

Despite the general similarities of design elements between Plains tribes, the decorative work of each group can be distinctive. Yet, the identifiable patterns and colors have changed periodically with the assimilation of the traditional designs of other tribes and the impact of tribal goods.

During the Reservation Period, the abundance of the beadwork that was produced was for ceremonial use and the tourist trade. The older ways of bone awls, native tanned hides, and sinew thread were sometimes replaced by steel needles, commercially tanned skins, and cotton thread.

A close look at this Plains art form opens a window into the past. To a serious collector of Native American art, the focus would be on the historic period of the culture. Thus this belt and pouch would be considered too new, and, as such, interest in the piece would be as an accessory. At auction, these masterfully beaded first-quarter-of-the-twentieth-century pieces would be modestly priced at $300 to $400. 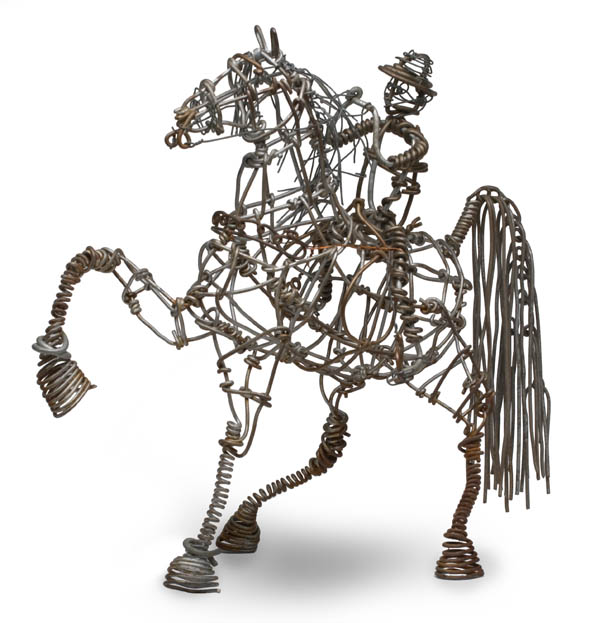 Tennessee native Vannoy “Wireman” Streeter, a self-taught folk artist, was born in Wartrace in 1919. As a young boy, Streeter first displayed his extraordinary talent as an artist creating toys for himself out of bailing wire, in the form of trucks and  airplanes. Since his parents were unable to afford to purchase toys for the family, Streeter copied his toys after ones he had seen in Shelbyville storefront windows.

Raised on a farm, Streeter, the oldest of six brothers, learned the business of horse training and grooming from his father. His work as a stable boy for Strolling Jim, the 1939 Grand National Champion Tennessee Walking Horse, instilled a lifelong love of the breed. The walking horse became his signature creation, and he is credited with making hundreds of wirework walking-horse figures, most carrying a rider outfitted in a top hat and tails.

Streeter’s subject matter was not restricted to the walking horse; he also created other forms using wrapped and twisted wire. He apparently enjoyed the challenge of making subjects with moving parts, such as cars with steering wheels that turned the front and rear axles, motorcycles with kickstands, and eighteen-wheelers that actually rolled. His most whimsical creations took the form of fellow Tennesseans Tina Turner and Elvis Presley.

Streeter made most of his sculptures out of coat-hanger wire; he bought the hangers by the hundreds. He worked with a regular pair of pliers and used varying gauges of wire for detailing.

To support his wife and family, Streeter worked on the railroads, at a lumberyard, and as a hospital orderly. Although he did not have the luxury of having his artwork support him, the artwork did not go unnoticed. By the mid 1980s print and television features about Streeter’s wirework began to draw first regional then national attention. Folk art collectors were warmly welcomed at his home. He participated in art events such as Bell Buckle’s Webb Craft Fair and was honored at Atlanta’s National Black Arts Festival. His work has been exhibited in the Tennessee State Museum, the White House, and foreign embassies.

Vannoy Streeter died in 1998 after a lengthy illness. His works can be found at auction houses, art galleries, and antique shows. For a fine example of his work like this high-stepping Tennessee Walker, one might be prepared to spend $400 to $500 at auction. 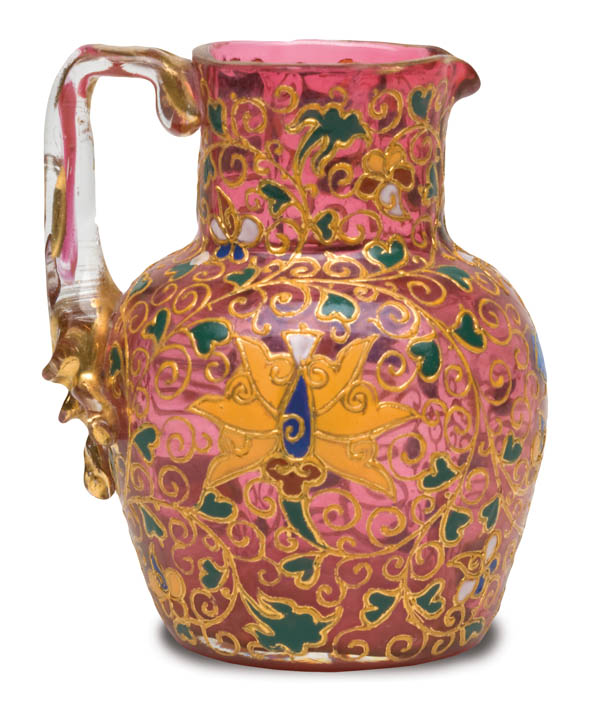 with applied handle, enameled and gilded in insect and foliate motif, circa 1885, 4” high. Ludwig Moser (1833-1916), a Jewish artist from the Czech Republic (then known as Bohemia), was formally trained as a painter and engraver, but he is best remembered as the founder of Moser Glass.

The Moser firm, founded in 1857 in Karlovy Vary, Czechoslovakia, employed many artists who were Bohemian. Glass had been produced in Bohemia since the sixteenth century. These artists brought their design ethic to much of the work produced at the Moser facility between the1870s and 1890s. Beautiful forms were richly decorated using indigenous themes and motifs, as well as employing heavy gilding and enameling in intricate designs. Some of the art that influenced Moser’s designs included European Baroque art, work by Islamic goldsmiths, and Japanese floral motifs.

Ludwig retired sometime around the turn of the twentieth century. Production continued and was overseen by several of his sons. The Moser family expanded the visibility of the firm at international glass expositions as well as by collaborating with members of the Art Nouveau movement’s Wiener Werkstatte, an influential workshop of the era. During World War II, the Moser family lost control of the factory and were scattered around the world. The factory complex was taken over by the Germans for their war effort, and many of the designers and artisans were interned in concentration camps as political prisoners. Those workers who remained became, in essence, slave labor. This was not a wise move on the part of the German occupation. It is reported that the remaining workers deliberately altered the proportions of ingredients, causing disastrous shattering of German tank windows and military gas mask filter glasses while on the war front.

This diminutive enameled and gilded glass pitcher was undoubtedly inspired by the designs of thirteenth- and fourteenth-century mosque lamps. Bohemian glassmakers combined the techniques of enameling and gilding of this eastern inspiration to produce colorful glass with intricate, colorful designs. One may expect to pay $400 to $500, in a retail setting, for a similar example from this period.

Linda Dyer serves as an appraiser, broker, and consultant in the field of antiques and fine art. She has appeared on the PBS production Antiques Roadshow since season one, which aired in 1997, as an appraiser of Tribal Arts.  If you would like Linda to appraise one of your antiques, please send a clear, detailed image to antiques@nashvilleartsmagazine.com. Or send photographs to Antiques, Nashville Arts Magazine, 644 West Iris Dr.,  Nashville, TN 37204.