Master of innuendo and snappy comebacks, wisecracking ventriloquist dummy Charlie McCarthy was the creation of Edgar Bergen. Slow-witted Mortimer Snerd, man-hungry spinster Effie Klinker, and Charlie were the cast of this different kind of McCarthy era, one of fun and fearless freedom of speech.
Bergen developed a talent for ventriloquism as a young boy and created Charlie while in high school. With the eclipse of vaudeville, in the early thirties Bergen polished his routine for nightclubs. Bergen and McCarthy made their radio debut in 1936 and were an instant success. The team almost immediately was given their own show. The Edgar Bergen/Charlie McCarthy Show was one of radio’s highest-rated programs, a distinction that the show enjoyed till it left the air in 1956. Edgar and Charlie went on to be featured in movies and television. Their appearance sometimes included Edgar Bergen’s real child, Candace Bergen. The act was retired in the 1970s.
This whimsical wind-up toy is a great example of the work of its manufacturer, the Louis Marx Toy Company. Louis Marx was not only a genius at designing toys but also at marketing them, by offering quality at the lowest price possible.
Some of those notable companies included Bing, Lehmann, and Marklin. In the years following World War I, Germany lost its position as the leading producer of tin toys by being out-produced by the Japanese in the global export market.
The American firm Louis Marx and Company was founded in 1919 by Louis and David Marx in Erie, Pennsylvania. While they were not the first in the country to produce tin toys, Marx, inspired by their European counterparts, became the dominant American manufacturer of tin toys that reflected the same attention to quality and design. Louis Marx and Company appeared to have a knack of positioning themselves to take advantage of changes in the market. In 1922, Marx had the opportunity to buy the American firm and leader in the tin toy industry Ferdinand Strauss. The assets that came along with that purchase were the dies to some of the most famous Strauss toys, such as the Zippo climbing monkey and the Alabama minstrel dancer.
During World War II, Louis Marx became a supplier of the war effort, and his toy factories were converted to accommodate that task. Following the end of the war in 1945, he was named an industrial adviser to Germany by General Dwight D. Eisenhower. He also returned to toy manufacturing and achieved a dominant position in the U.S. market during the 1950s and 1960s with toy guns, dollhouses, and the introduction of friction-based vehicles. Louis Marx was featured on a 1955 cover of Time magazine extolled as “The Toy King!”
Marx, an early adopter of overseas manufacturing, established factories in ten countries by 1964 and licensed others for export. Despite Marx’s earlier success, his business began to lose steam. The Japanese flooded the market with low-cost, mass-produced tin toys, and by the 1970s tin was being replaced by plastic and newer metal alloys. Quaker Oats bought the company in 1972 upon Louis Marx’s retirement; the culture of the company suffered, and the new product introductions began to fail. In 1978, the original Louis Marx and Company ceased production.
Marx Toys is one of the most popular brands among today’s antique and vintage toy collectors. This Charlie McCarthy “mechanical walker” with his moving mouth and side-to-side shuffle, in working order and in good surface condition with no paint loss or rust, would have a replacement cost of $400 to $500. 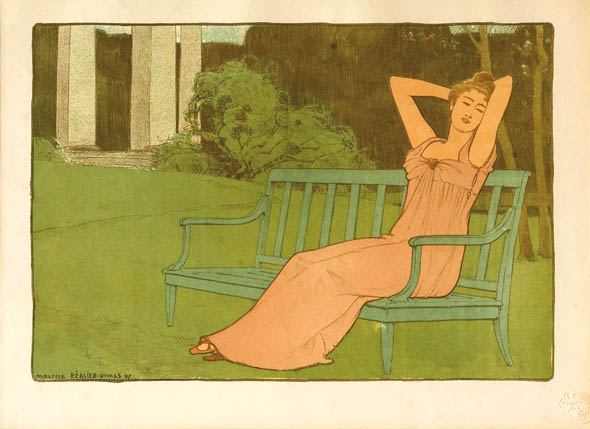 This pleasing print of a young woman at rest in a garden is the work of the Paris-born artist Maurice Realier-Dumas. It is from an edition of L’Estampe Moderne issue no. 1, published in Paris in May of 1897. L’Estampe Moderne appeared in May 1897 and ran as a monthly publication, each containing four original lithographs, until April 1899. Each of these lithographs had its own tissue guard, printed with extracts from poetry or contemporary literature of relevance to the image. Most of the lithographs were printed directly onto the main sheet of thick woven paper, but some were printed on various papers and then mounted on a backing sheet.

There were twenty-four editions of L’Estampe Moderne published in total. Each remarkable issue, printed and published by Imprimerie Champenois of Paris, came in a paper cover, which itself incorporated an original lithograph, and was priced at three francs fifty centimes, well under today’s one dollar U.S. The May 1897 issue that contained this image entitled Corinne by Realier-Dumas also featured a cover design by Alphonse Mucha, the Czech artist who played a prominent role in shaping the aesthetics of the French Art Nouveau movement. The mission of the publishers was to promote the art of printmaking. They commissioned previously unpublished works from many of Europe’s finest artists of the time, such as Edward Burne-Jones, Theophile Steinlen and Henri Fantin-Latour. Original works of art for a mere three francs fifty centimes!
In the case of this print, it is an original work of art, a print made by using a press to transfer to paper an image that was created initially on stone, a lithograph. A lithograph is created by drawing an image onto a stone (lithography = stone-drawing) or metal plate using a grease crayon or a greasy ink. The process is based on the principle that grease and water do not mix. To create a lithograph, the stone or plate is washed with water, which is repelled by the crayon, and then with ink, which is absorbed by the crayon. The image is pressed onto the paper from the stone or plate, which can be re-inked many times without wear.

The richly lithographed prints from L’Estampe Moderne are best identified by the publisher’s blind stamp imprint of the image of a young woman’s profile found in the lower right corner of each print. Prints from these editions are highly sought after and, as with all works on paper, condition is extremely important. This image, as determined by its dimensions, is a full, untrimmed sheet, in fine condition and color. Retail prices for a similar work on paper of this sinuous young woman would run from $600 to $900 in galleries around the world.

Note of interest: While the owner of this image has it hung in a “room with no name,” a like print from the same period can be found hanging in the lobby of Nashville’s Union Station Hotel, just past the foyer.

Linda Dyer serves as an appraiser, broker, and consultant in the field of antiques and fine art. She has appeared on the PBS production Antiques Roadshow since season one, which aired in 1997, as an appraiser of Tribal Arts.
If you would like Linda to appraise one of your antiques, please send a clear, detailed image to antiques@nashvillearts.com. Or send photographs to Antiques, Nashville Arts Magazine, 644 West Iris Dr.,  Nashville, TN 37204.