When many of us think of famous sculptors, our first mental stop is Italy, followed by France, and a series of mostly Western names, such as Michelangelo, Donatello, Giacometti. While exploring the horizons of his talents as a sculptor, a youthful Bruce Peebles began to hear about the flourishing schools of carving beyond the borders of the Western imagination. “In 1991 to 1995, European critics said seven of the top ten sculptors in the world lived in Zimbabwe.” Peebles immediately knew he had to go there. 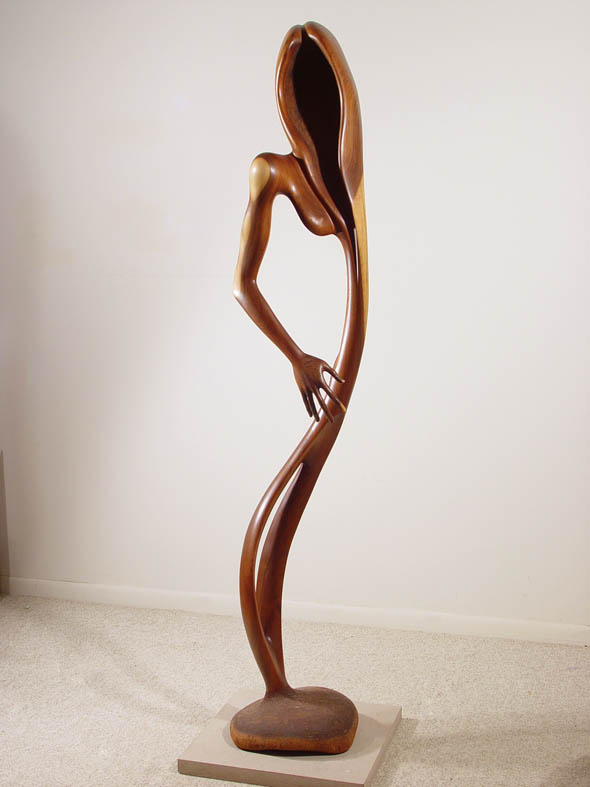 He packed away his belongings and made Africa, its people, and its art the destination of many years to come. He settled in Zimbabwe and began to develop a strategy for getting to know the great artists whom he had dreamed of encountering. Shy yet innovative, he decided to let the masters come to him rather than inundating them with pleas for guidance. “Before long, I got into a gallery.” From there, he began to become an adopted son of his community. Over years, the human landscape of Zimbabwe fed his soul as an artist. “Africa is the key to everything as far as my sculpture is concerned,” he claims.

The first time I met Peebles it was a snowy winter morning far away from the continent that inspires his work. He held my hand to help me climb the tall, icy hill that leads to his studio off Highway 100 in Nashville. Peebles is quiet, a little nervous when speaking. His depth of understanding for the magic of his craft and his intuition about his own experience could easily go hidden beneath his unassuming manner.

Peebles began his artistic journey as a draughtsman. His first journey to Africa as a small-town Tennessee boy changed the way that he approached art. “I started going to Africa when I was 16. I was a photorealistic wildlife artist seeing everything in 3-D.” Peebles’ attempts to represent the three-dimensional world on flat paper transformed into a burgeoning interest in sculpture. It was in carving shapes and bending forms that Peebles began to find his home as an artist—no matter how far away his quests for inspiration would eventually lead him. “My high school didn’t offer sculpture, so I came up with my own class with my own curriculum.” Peebles’ nature as a self-starter and self-educator define his work to this day. 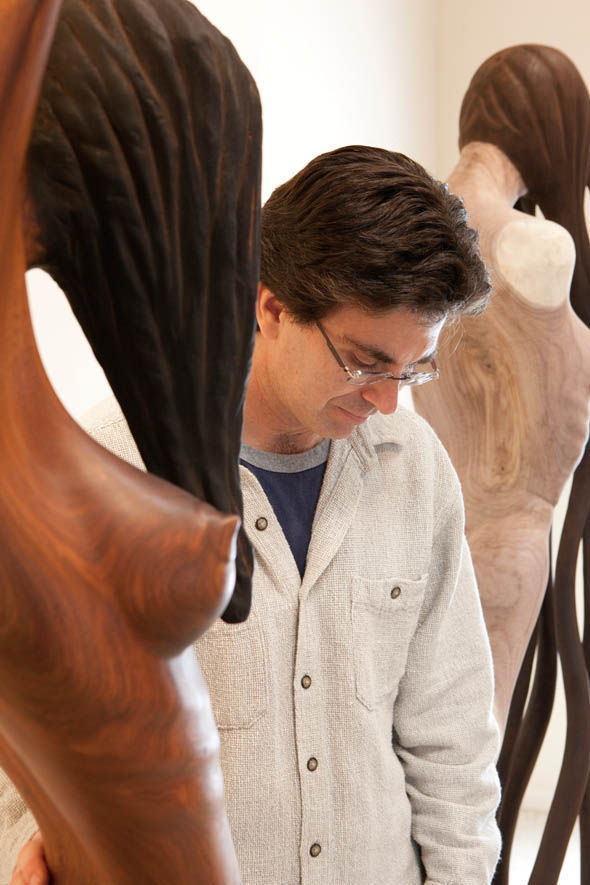 The stereotype of the quiet artist has become such a historical trope that one hesitates to overuse it, but Bruce Peebles’ ability to shrink away from the hub of the crowd and lose himself in nature or in his work is perhaps the centerpiece of his talent.

Peebles describes his separation from the outside world by telling a story about safaris during his time in Africa. He claims that jeeps carrying animal-gazers would charge over the rough terrain in search of exotic wildlife. “There was a time in my life where I was out in the bush so much that there was a point where I became what they were looking for. I became part of nature. I became so different that they became a disturbance to me.”

The result of Peebles’ stay in Zimbabwe is an art that seems to burn with an internal fire. His sculptures incarnate souls, and those souls are old. It is easy to find a figural work that is beautiful. It is rare to find one that is wise. Peebles’ sculptures seem to impart their own wisdom—they look down on the viewer in a halo of beatific grace. Many of them do not even have eyes, but there is something transcendent in their forms that charges their surrounding spaces with spirit and a sense of peace. 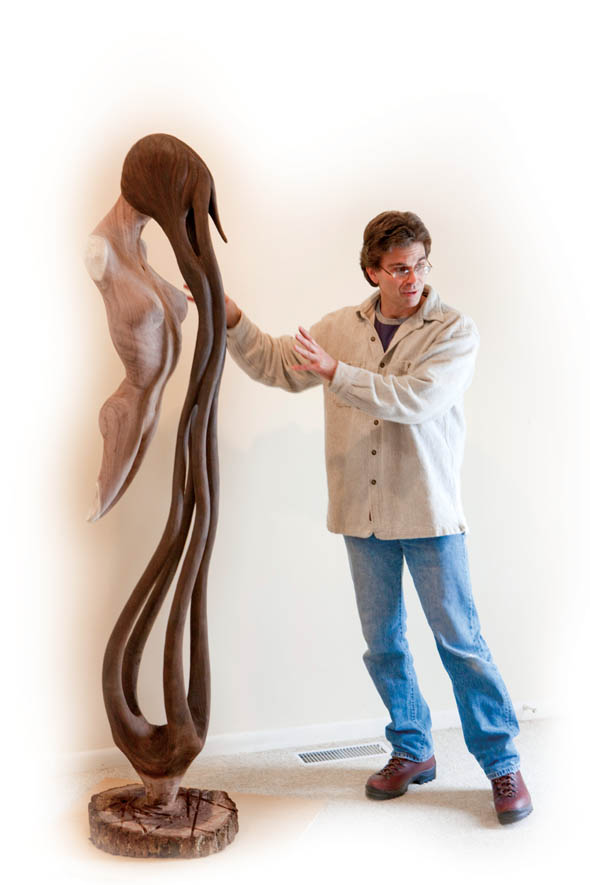 Peebles’ method of carving sets him apart from all of his peers and characterizes his intuitive relationship with nature. He bleaches wood completely white and burns it to create shade and texture rather than painting it. When carving wood, Peebles does not wait for it to dry out or cure. He carves while the recently fallen tree is still green, settling, becoming something else. At this point, the wood is very fragile and is prone to crack as it continues to desiccate.

Peebles claims that many of his peers call this method impossible, but he has his secrets. Most importantly, he claims that he knows where to “release the tension” on a green sculpture, and he understands that, to a degree, the medium will determine itself. “No matter what you do it’s going to find its own balance.” 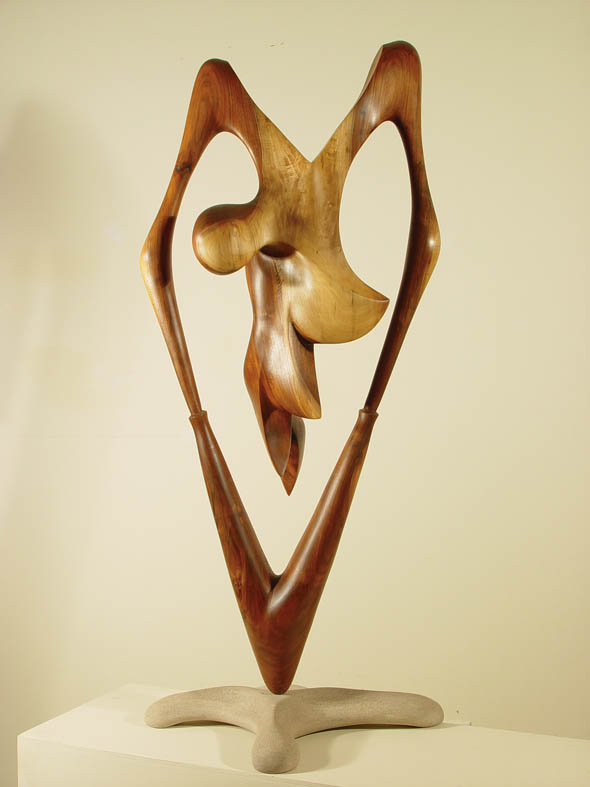 Today, Peebles is taking his wood sculptures to the next level by animating enormous abstract fixtures for large public spaces. Returning to his past as a self-taught artist, Peebles has trained himself in the intricacies of electronic art. He uses balsa wood that looks like metal to keep his structures lightweight and charts their movements on computer. Along with programmer Shawn Schaeffer, Peebles conducts a vast orchestra of moving parts to create a beautiful, organic experience of wooden sculpture. Although they vary in form from his freestanding compositions, Peebles’ electronic works rely on the same sense of life, movement, and grace that informs his human figures.

When sculpting, Bruce Peebles toils in a noisy din of cacophonous sounds. A hillside workshop filled with chainsaws and dental tools for carving provides evidence of the ear-shattering nature of his craft. It is hard work and, to the outside observer, seems so far away from the peace of his final products. Somewhere between his inspiration and outcome, Peebles infuses his own quietness into his craft. He says, “There is always that spirit of Africa that comes back to me.” 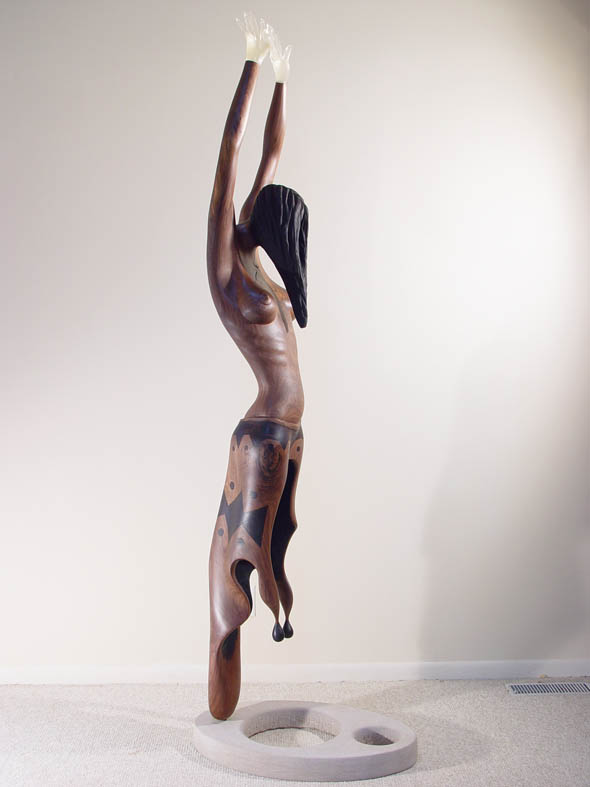 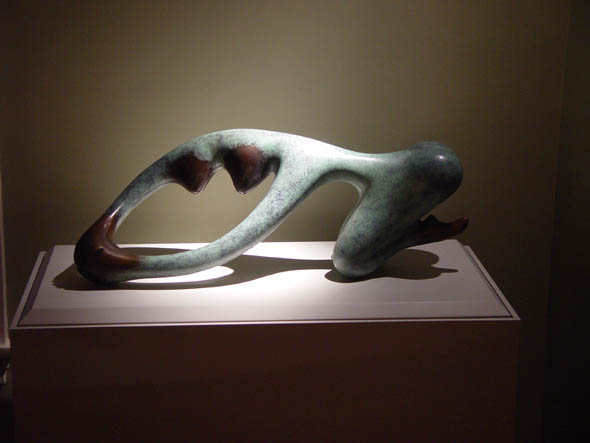 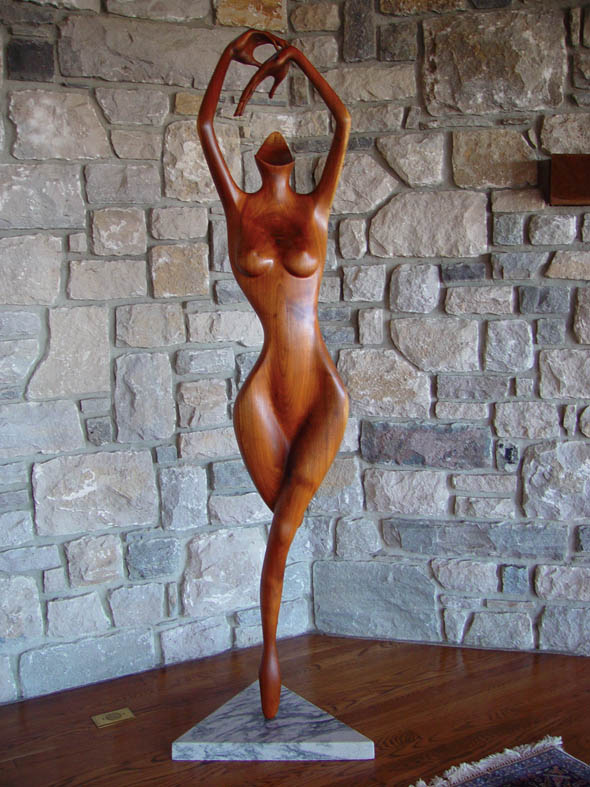