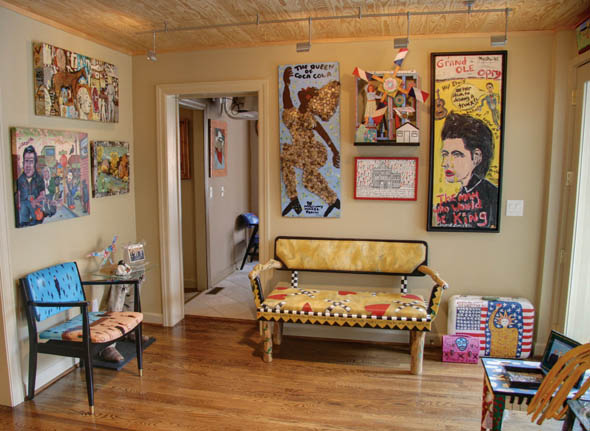 Strolling the home of Beverly Keel and Ronnie Steine may not be the equivalent of reveling in the glory of the Louvre, but it is close. If ever a Nashville private residence best mimics an art museum, it is the west-side home of this fascinating couple and Steine’s 18-year-old son, David, for whom art and life act as one. 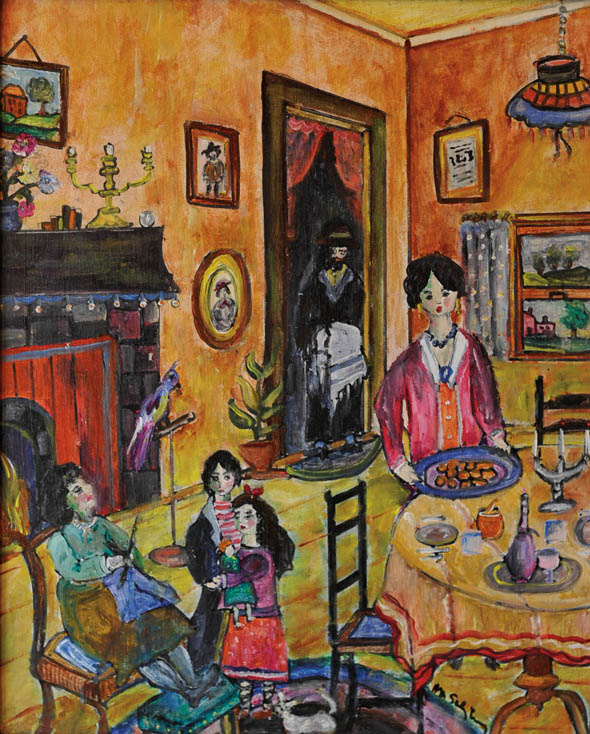 In short, the Keel-Steine residence is very much like a painting itself. Rooms, hallways, nooks and crannies throughout the house burst with color. Odd shapes, forms, and textures decorate every square inch of this mid-sized abode where every picture has a story to tell, a story rich with vibrancy and passion. Still lifes line a stairwell, while a folk art homage to musicians awaits upstairs. Their decorating philosophy is equal parts respect for the art and humor. An alert visitor using the guest bathroom may notice that all eyes are on him—at least in the many faces hanging on the walls. Bedpans and toilet seats are among the materials used to create the folk art that is displayed as proudly as works by some of art’s biggest names. 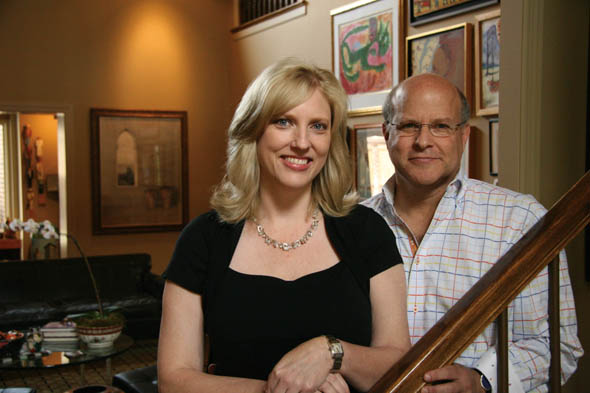 Their art isn’t about investing well or impressing others, but simply about the happiness it brings to the couple. “It is an environment that provides us with joy and a constant state of discovery,” Steine says.

“Living in art” has been an intrinsic part of Steine’s life since early childhood because his parents, Peggy and David Steine, were respected art collectors who shared their art with museums and befriended countless artists along the way. Enjoying art and learning about its history, as well as giving it as gifts to their children, was a passionate part of their grand love affair. At a young age, Steine was introduced to works by Picasso, Wyeth, and Rodin, as well as works by local Nashville artists that the Steines supported and championed.

“Each day we ‘re-find’ a wonderful creation. A painting or sculpture that we might have taken for granted over the years takes on a new meaning or significance for us. Our relationship with our collection is continually changing and renewing itself,” adds Steine.

“Clearly, ‘collection’ may not be the right word because it implies a cohesion or theme that doesn’t exist. It’s all very eclectic and a tad odd,” Steine explains.

Keel and Steine have a markedly different approach to displaying art. For Steine, great art should be everywhere, stacked floor to ceiling, literally. “I am comfortable with art everywhere, but the ‘clutter’ drives Beverly nuts,” Steine says with a wry smile. “So I’m trying to cut back on stacking so much.” 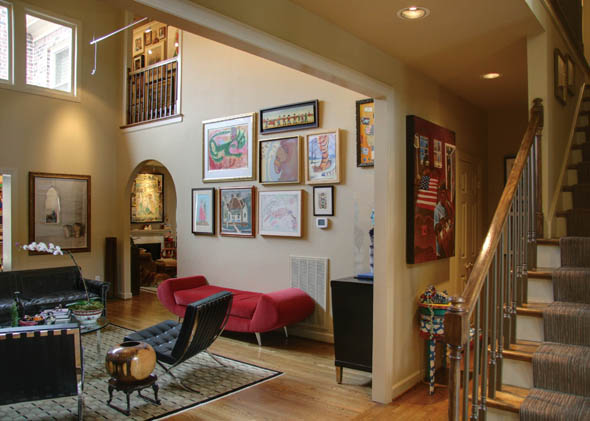 Keel counters by noting that after they remodeled their home and Steine was rehanging the art in the living room, several “discussions” followed. “I gave him a limit as to how high up to the ceiling he could hang art,” she says. “I think this restraint allows our art to be showcased in a manner that provides a beautiful setting without overwhelming us. I am sure Ronnie strongly disagrees,” Keel adds with a chuckle.

The contrasting approaches make sense, given the couple’s differing tastes and personalities. Keel is a recording industry professor and director of the John Seigenthaler Chair of Excellence in First Amendment Studies at Middle Tennessee State University. A freelance music journalist on the side, her work has appeared in People, Rolling Stone, Oxford American, and USA Today. Keel consumes the popular culture, including music, movies, and magazines.

The reserved Steine offers a more conventional and understated style to counter Keel’s hip persona. An at-large member of the Metro Council and co-owner of Sailair Travel, his passions include politics, sports, and literature. 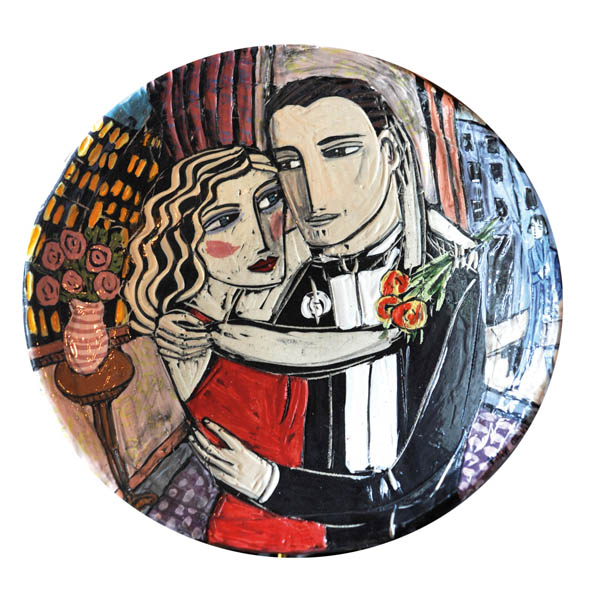 They do, however, share a common love for folk art, which Keel began collecting before she met Steine. “I collect folk art because it’s what my heart is drawn to,” she says. “It speaks so powerfully to my emotions. I relate to the simple but powerful truths expressed in such creative, basic, humorous and/or moving ways.”

“The artists—whether Southern African-Americans or modern folk artists like Mary Shelley and Tom Haney—are so interesting, and their creative products so often emotional or inspirational,” Steine says. “It is also helpful that prices, while frequently not cheap, are more affordable than much of contemporary art.” 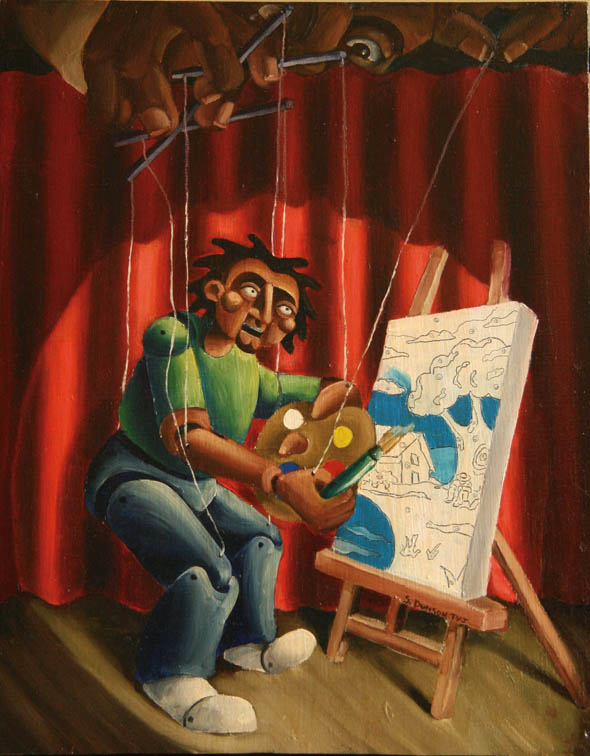 Steine believes several of the Nashville artists in his collection are rising stars on the national scene, especially Samuel Dunson, who teaches at Tennessee State University, and crayon sculpture artist Herb Williams. “Sam Dunson and Herb Williams have unique potential to be major national presences,” Stein says. “Sam’s work is so powerful and provocative, while Herb’s original style is often whimsical yet so thoughtful and creative. Fortunately, Nashville is blessed with many wonderful artists. Sylvia Hyman, Marilyn Murphy, and Paul Harmon are among those who have been extraordinary for many years.”

Steine also treasures his collection of political memorabilia, which he began in the mid 1970s and consumes an entire large room. The collection includes buttons, coins, posters, and figurines, with a special focus on Tennessee and Nashville politics.

“In the last decade, I have combined my loves and collected art that is political and the political that is art related,” Steine says. This includes campaign posters by Alexander Calder, Ben Shahn, and Peter Max and political-themed art from Chad Poovey, Rex Clawson, Jane “in vain” Winkelman, Robert Grossman, and Larry Rivers.

Regarding first-time visitors to the home, Keel says, “At least one has told me, ‘I would hate to have to dust all of this.’ ‘So would I,’ I responded.”

Occasionally, guests have compared the home to a museum, but Ronnie Steine and Beverly Keel are not museum curators. “It’s our home,” Steine says, “that surrounds us with art we enjoy and love.” 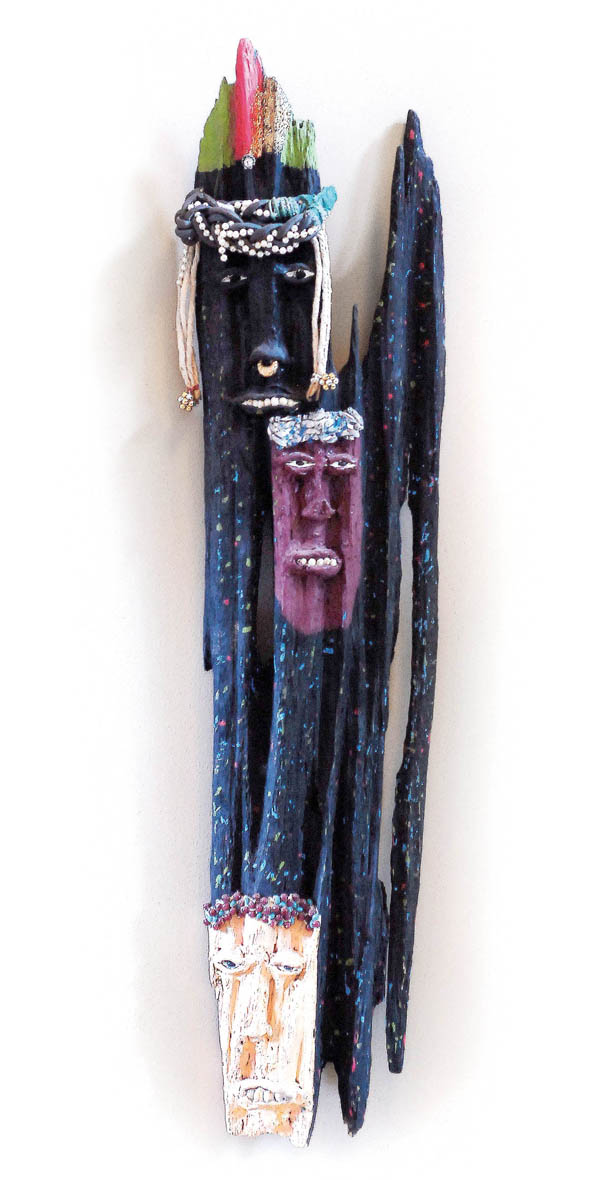 As a collector, selecting a “favorite” piece is almost painful. My mom used to say she couldn’t do it because it was like choosing which child she loved the most. But pressed to do so, my current favorite is Bessie Harvey’s Three Kings. I have an affinity for art created out of wood, and I never tire of the outsider Harvey’s haunting yet comforting piece.

Her regal faces emerge as if Harvey has freed them from the driftwood. She would have said they are “souls” inspired by her visions. For me they are mysterious characters who are different colors but look so similar they could well be brothers. Certainly, they’re reflective of our common humanity despite ethnic or cultural differences.

Even though I’m not very superstitious, the Three Kings live near our front door because I think they are looking over and looking out for me and my family.

Bessie Harvey is one of the best-known African-American outsider-visionary artists of the last half-century. Harvey, who died in 1994 at the age of 65 in her Alcoa, Tennessee, home, created intense sculptures made from the roots of trees, utilizing putty, beads, turkey bones, and trinkets. She began creating them as private comforts during a time of anxiety caused by her teenage sons’ involvement in drugs and petty crime. She saw her skill as visionary and claimed to find “souls” in the wood, and she brought forth the faces of African royalty, biblical characters, and ordinary folk. 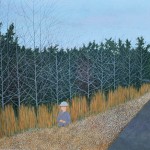 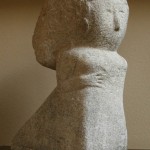 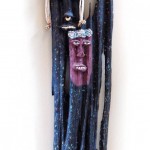 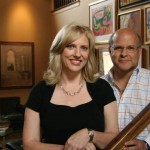 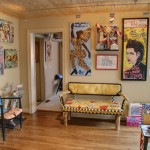 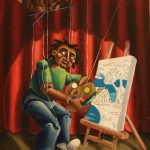 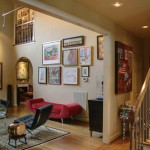 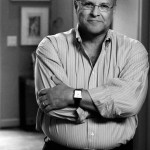 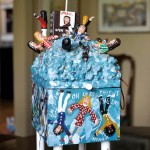 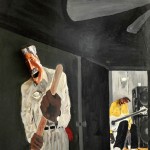 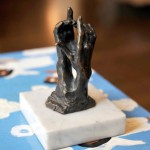 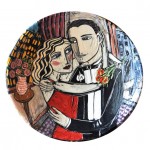 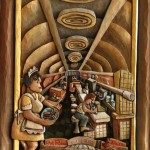 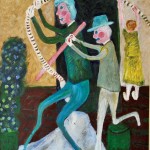 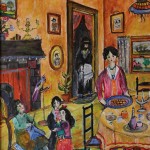 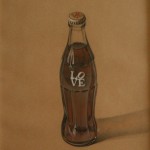