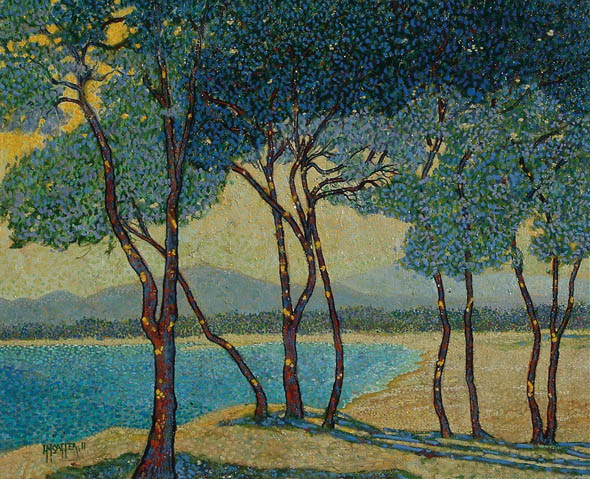 Even the folks at LeQuire Gallery don’t know what the initials HM stand for after three years of correspondence (since 2008). That’s when negotiations between gallery and artist started. Both parties knew they were a good fit for each other; it was just a matter of timing. Finally, after three expansions in less than one year, LeQuire Gallery had the space and felt the spring 2010 season was the right time to introduce HM Saffer to Nashville. (LeQuire expanded Charlotte Avenue in summer 2009, nearly doubling that space; opened a new space at the Arcade in August 2009 to participate in the Downtown Art Crawl, and recently opened at The Mall at Green Hills, May 2010.)

HM Saffer began his art career studying at L’Ecole des Beaux-Arts in Paris, France. He later studied the art of Japanese brush painting, called Sumi-e, with Japanese masters. While in Japan, HM Saffer adapted his Sumi-e techniques by applying Western styles of painting. Saffer reentered the United States in 1994 and took residence in Upstate New York. His style of painting shifted from exclusively works on paper to include oils. He began melding his Oriental influences with his Western styles in order to create new and different paths towards interpersonal visual expression, and his current works are a reflection of this mélange.