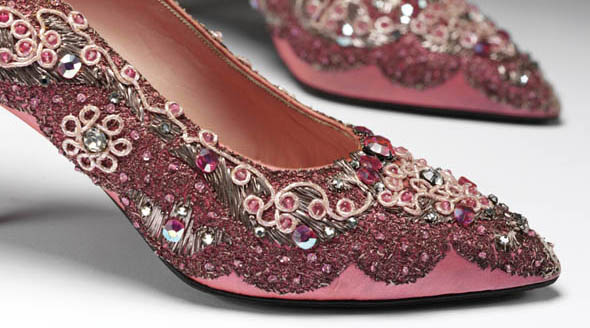 The Frist Center for the Visual Arts

Imagine a scene so foreign it seems out of a fairy tale. A woman is the center of all attentions in a fashion atelier. The room teams with life: the snip of scissors, the rip of a seam, the rustle of silk, the scent of perfume, pins pinched in red lips. As this woman is fussed over and measured, a frothy confection of fabric whips up around her. And whether wife, queen, or heiress, she feels her heartbeat quicken at a singular thought: This gown will be unique to me only. 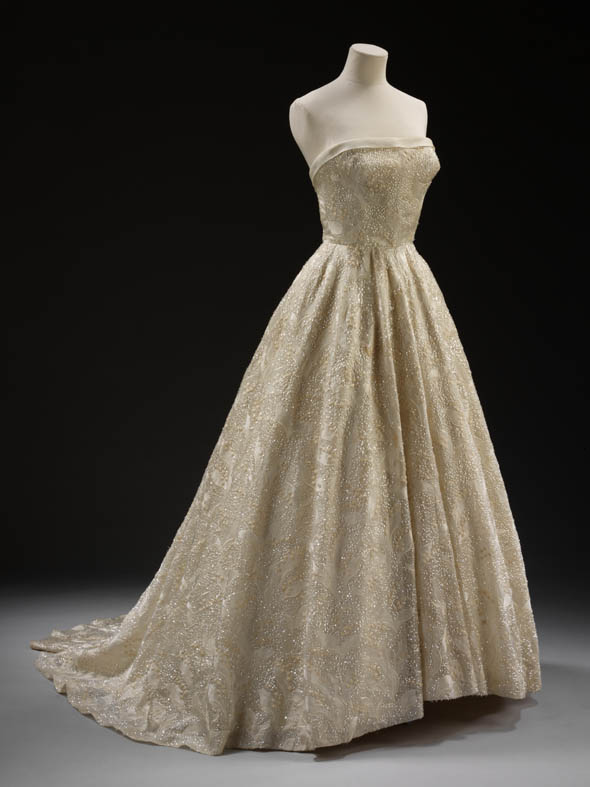 Such was the world of “haute couture” fashion after World War II, a golden era of custom-made clothing in Paris and London that defined women of a certain taste level . . .  and pocketbook. As Jean Dawnay, a Christian Dior model of that period, wrote, “A Paris dress makes one feel capable of charming a pearl out of an oyster.”

This reverie can be experienced on June 18 as Nashville’s Frist Center for the Visual Arts debuts The Golden Age of Couture: Paris and London 1947 –1957. Gowns, suits, shoes, undergarments, hats—everything that would spill out of a wealthy woman’s closet will be on view, allowing the public to glimpse the fruits of what was, and is, an industry reserved for society’s elite.

Originally organized by the Victoria & Albert Museum of London, the collection of more than one hundred dresses and ancillary items has drawn record-breaking crowds around the globe. The Nashville show, which runs through September 12, 2010, is its sole U.S. appearance. 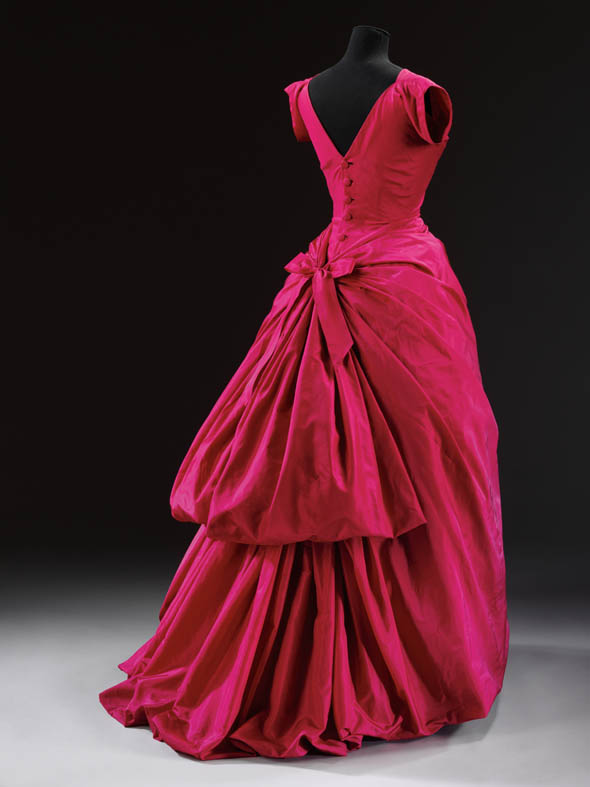 Ellen Pryor, the museum’s Director of Communications, said being that one museum is a coup. “It speaks volumes about who we are as a city and what the Frist Center is becoming as a museum. Our reputation is being spread farther and farther with every exhibition we do.”

Trinita Kennedy, associate curator for the Frist, came to Nashville from New York’s Metropolitan Museum of Art, where its Costume Institute has more than 35,000 costumes and holds two fashion exhibitions a year. “I saw how (the exhibitions) brought new people to the museum every year, a different audience,” she said. So she pitched the idea to her Frist colleagues and also saw the “Golden Era” show in London in 2008. “The audience really was mainly women,” she said. “But it was packed.”

Kennedy deems this exhibition the second most complicated to arrange, following the Ancient Egypt show with its enormous antiquities and sculptures. Because of their delicacy, most of the garments require expensive casework to protect them, so a museum needs the resources to house such a bounty. “There are at least fifty different designers represented in the show,” Kennedy said. The show highlights Parisian designers Christian Dior, Cristóbal Balenciaga, Pierre Balmain, and Hubert de Givenchy, along with their London counterparts Norman Hartnell and Hardy Amies.

Literally translated, “haute couture” is French for “sewing at a high level.” In 1868 the haute couture business became regulated by the strict rules of the Chambre Syndicale de la Couture Parisienne. During the decade of the “Golden Era” such rules stated a designer must have a “suitable” Parisian atelier and create two collections per year. Each collection must have had seventy-five original designs. The designs had to be made almost entirely by hand, to measure, with fittings at each stage of design. The house had to employ a minimum of twenty full-time employees. The list goes on and on. 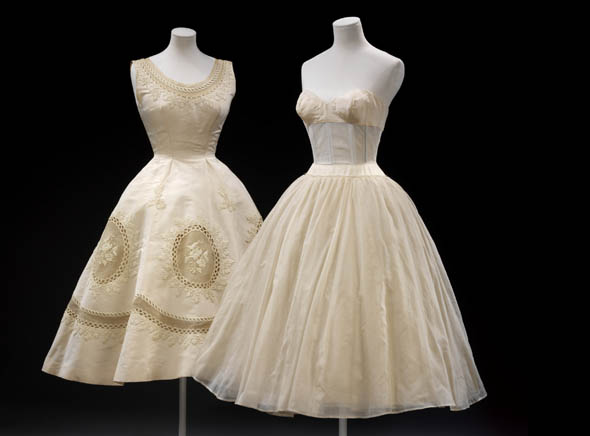 Ultimately, haute couture was (and remains) a labor-intensive craft that involved as many as two hundred hours to make a dress, and more than 100,000 hours to create a collection. Only the finest fabrics were used, and details were important: even buttons were custom crafted (as in the case of Chanel’s double C numbers). The resulting garments appeared as beautiful on the inside as on the outside.

In modern pricing, a haute couture garment can sell for four to six figures. Forbes cited an approximate $9 million price tag for a diamond-festooned, Scott Henshall gown worn by Samantha Mumba to the 2004 premiere of Spiderman II. (There’s no word on a price tag for the Oscar de la Renta silk organza, haute couture gown Oprah Winfrey wore in May to the Costume Institute gala. According to Vogue, it took four people and more than two hundred fifty hours to make.)

In the book Golden Age of Couture, Dior was quoted about the shift: “We were just emerging from a poverty-stricken, parsimonious era, obsessed with ration books and clothes coupons; it was only natural that my creations should take the form of a reaction against this dearth of imagination.” 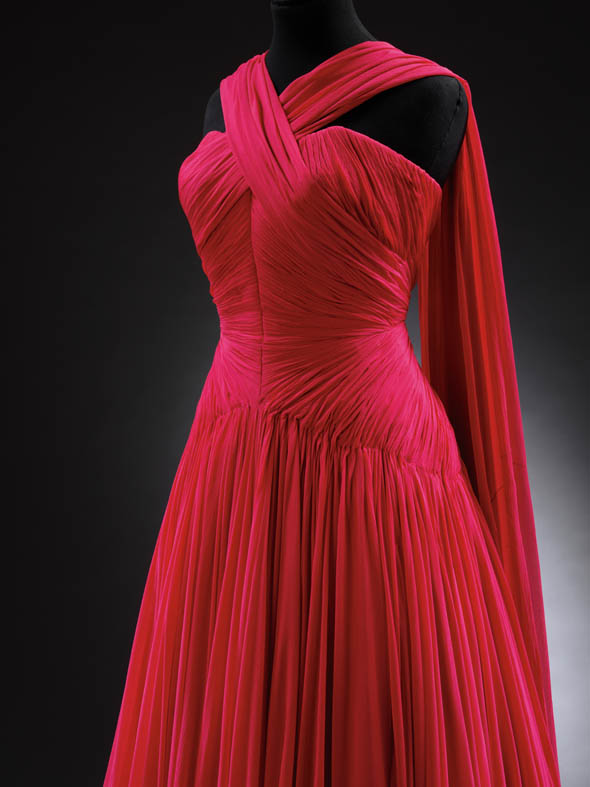 It is at this point in history that the Frist show begins. “The first gallery explains Dior’s ‘New Look’ and the characteristics of it,” said Kennedy. “It also explains how Paris really sought to re-establish itself as a fashion capital after the war.”

Following the “New Look” introduction of the Frist show, there’s a large section called “The World of Couture” where visitors learn about different facets of couture, including “Paris Dressmaking,” “London Tailoring,” “Undergarments,” and “Embroidery.”

“That undergarment section’s actually very interesting,” Kennedy said. “Because in the ’20s the flappers got rid of corsets, and then Dior had women wear them again in order to create that silhouette that he wanted.”

For a peek into mid-century luxury filtered through a champagne cocktail, visitors are introduced to Lady Alexandra. An embassy wife in 1948 Paris, her fairy tale of couturier consumption is told through letters, Jacques Fath gowns and suits, and an audio guide narrated by her daughter. 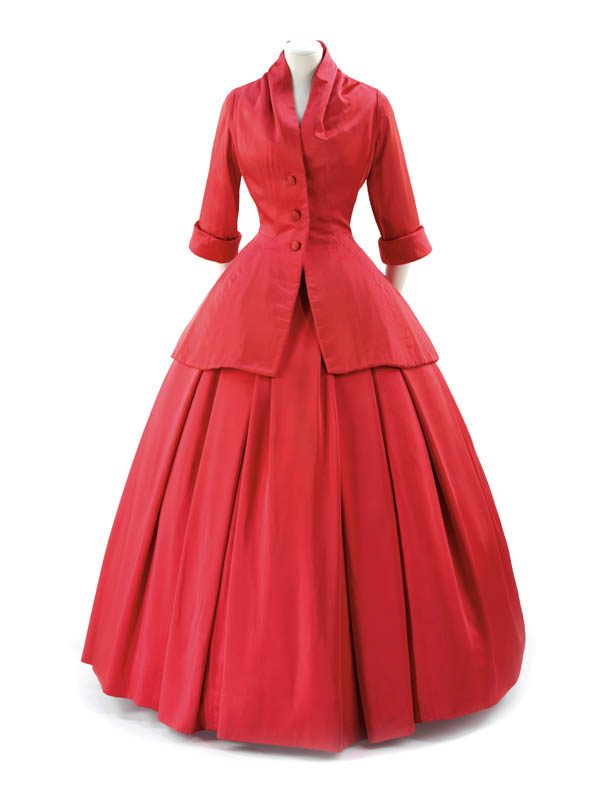 Bringing visitors back down to earth is a section about mass-marketed ready-to-wear that explores the realities of the era’s business market.“This section reminds us that our grandmothers or mothers or sisters wore clothes that were inspired by these high-fashion garments,” Kennedy said. “Most women couldn’t have afforded couture garments, but if you look at photographs from 1947 to 1957, women were wearing similar things. Those are kind of period-defining clothes.”

Nashville designer Manuel Cuevas, whose professional moniker is simply “Manuel,” is arguably the closest relative of a haute couturier in Nashville. Also known as “The King of Cowboy Couture,” Manuel is legendary for his glamorous handmade garments worn by Elvis, Johnny Cash, and Elton John, to name a few.

Manuel met with Nashville Arts in his Broadway atelier, sitting among coffee-table books such as Dali and Historic Photos of The Opry and cutting a resplendent figure in a black suit.He spoke of haute couture’s enduring influence and the power of a custom-made garment, haute couture or not.

“People who care about fashion will always have a tremendous love for hand stitching, hand work, beading, the placing of jewels on dresses, on garments of any kind,” he said. At its heart, he maintained, a one-of-a-kind garment captures the spirit of that person. And what is at the heart of the haute couture customer of the last century? Manuel said, bluntly, “courage” and “loot.”

If you want a picture of how courage and bottomless pockets propelled designers to great heights, visit the Frist Center during The Golden Age of Couture: Paris and London 1947–1957 June 18-September 12. www.fristcenter.org

Below, The Frist Center of the Visual Arts’ video on their exhibit: