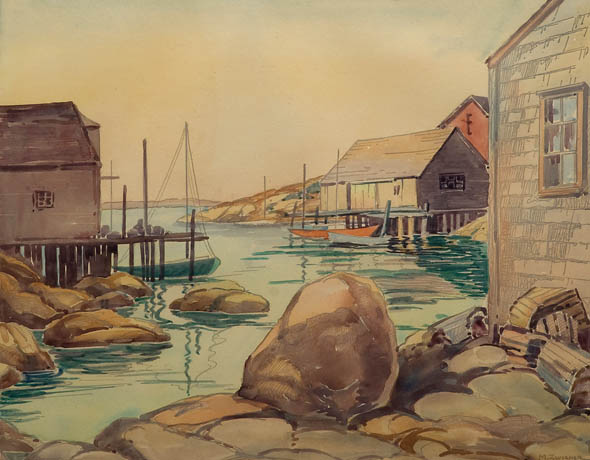 As I struggled in the dim lighting to decipher the signature on this image, I heard the owner quietly ask, “Have you looked on the back?” There on the back of the framed picture, neatly inscribed in ink was, “by M. Zwicker, A scene from Nova Scotia’s ‘fishing village’ shoreline. From Grandma’s treasures…Halifax, N.S.”

Known for her watercolor scenes of Nova Scotia villages and landscapes, Marguerite Zwicker was an active promoter of the visual arts in and around Halifax. Educated at the Nova Scotia College of Art, she also studied in the United States with the noted German-American Abstract Expressionist painter Hans Hoffman.

Marguerite Porter’s marriage in 1937 to fellow art student LeRoy Zwicker tied her to the family who founded Zwicker’s Gallery, Halifax’s oldest commercial fine art gallery.
Establishing the gallery in 1886, when Halifax was home to the second largest military garrison in the British Empire, Judson Zwicker recognized a need and provided for that market. His target audience was Halifax’s gentry, the British officers and their families, and the gallery succeeded. Following his death in 1942, his son, LeRoy Zwicker, and his wife, Marguerite, took over the ownership of the gallery, which then ran until 1968. Zwicker’s Gallery, now out of family ownership, is still in operation today.

First assumed to be a painting, this piece proves to be a watercolor-enhanced print that is signed in the plate. Still considered an original work of art and a great piece of Nova Scotia’s fine arts history, this charming work on paper has a retail value of $300 to $400. 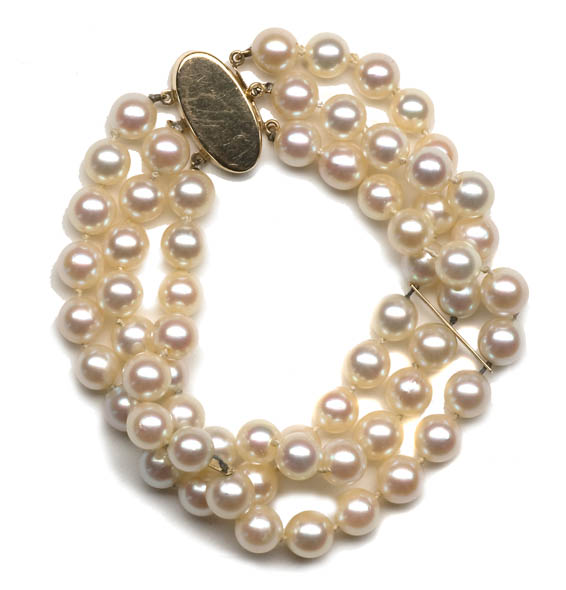 Lovely, lustrous pearls. These gifts from the seas and rivers were once the rarest and most desirable of gems. From the time of Cleopatra to the current day, they have been treasured for their rarity, beauty, mystical symbolism, and even their medicinal properties. So much information, so few words! Simply, any pearl grown inside a mollusk, fresh water or salt, oyster, mussel, abalone, or scallop, is considered genuine. Pearls come in a multitude of shapes, sizes, and luster. This fine bracelet is the product of a resourceful Japanese businessman, Kokichi Mikimoto.
A pearl happens when the shellfish becomes irritated by a grain of sand or an inserted seed. To relieve that irritation the mollusk secretes nacre, a smooth, lustrous material which is a form of calcium carbonate. When the nacre is found on the lining of the animal’s shell it is referred to as mother-of-pearl. When it deposits itself around a freestanding nucleus like a bit of sand or the aforementioned inserted seed, the result is a pearl.

During the turn of the nineteenth century, working from earlier processes, Mikimoto patented a method of producing cultured pearls by inserting a round nucleus inside an oyster shell to prompt the animal to secrete nacre. Mikimoto’s significant finding was that beads of clam shell have the greatest success rate for creating the desirable round shape. That discovery became the basis of the modern cultured pearl industry. It also had a deleterious effect on the price of natural pearls, due to increased availability as well as the fact that it takes an expert to determine the difference between cultured and natural pearls.

Determining the value of a pearl hinges on the following determinants: size (the bigger the better), color (white with rosy-pink undertones), luster (the denser the nacre, the better), shape (the rounder, the costlier), and origin (South Seas pearls grown in warmer Australian waters are often brighter and larger).

This beautiful three-strand cultured pearl bracelet was presented in a Mikimoto box, and the quality of the pearls and construction supports that provenance. A size of over 8mm puts pearls into a premium classification. Should this bracelet composed of 8 to 9 mm sized pearls be offered at auction, the owner may expect a return of $800 to $1200. 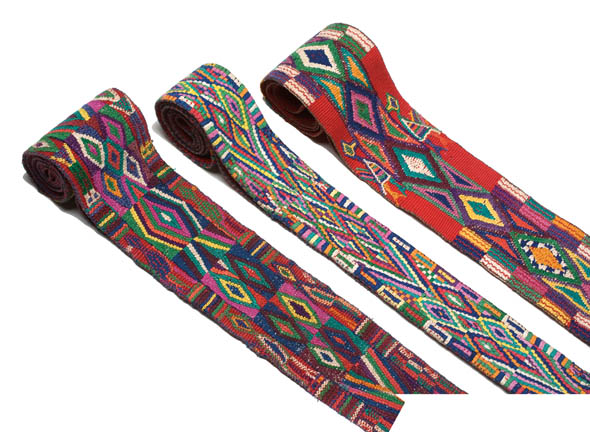 Possibly the most colorfully costumed people in the Americas are the Highland Maya of Guatemala. Even before the arrival of the Spaniards, weaving in Guatemala played an integral role in the lives of this Mayan culture, communicating their personal identity, their heritage, and their ideological beliefs. A large percentage of these indigenous people still wear their traditional dress called traje. In Guatemala Maya traje is village-specific or language-group related, so with dozens of towns and villages and twenty-one Mayan ethno-linguistic groups represented, the variety of indigenous costuming is remarkable.
During their recent civil war, the government forces studied distinctions of the Maya Indian regional dress to determine which village people came from. People could automatically become suspect just for belonging to a village where the military, or even the anti-government forces, suspected there was any sympathetic activity for their opponent. Suspecting or fearing one member of a village was supporting their opposition, entire villages or towns would be destroyed and the citizens annihilated. Nebaj in Departamento de El Quiche, the source of these belts, was one of over three hundred villages or towns that suffered this fate in the 1980s.

Many Maya have fled Guatemala to become refugees in other countries. In spite of all the hardships, fears, and poverty, the women especially continue to wear their traditional dress and to maintain the ancient art of weaving. Their reasons are many; among them, to create income from the tourist trade and to maintain their cultural identity.
As one unidentified Maya woman shared during an interview for a weaving study, “I can’t get accustomed to taking off my traditional clothes. I can’t adjust to putting on other clothes. I can only wear other clothes for an hour or two. I can’t leave my dress; it’s part of me. Without my dress I don’t feel calm inside; I feel like I’m missing something, something from me . . . .”

These extraordinary belts, used to hold up a wrap skirt that can average seven yards of fabric, are made of cotton, and they are not embroidered but hand-woven on a back-strap loom. The design decoration is achieved by the weaver adding shorter lengths of thread across the top. The average length of a “faja” is one hundred and twenty inches. The owner of these exceptional weavings purchased them at a yard sale for $5 each. A collector of such woven artifacts would expect to pay $70 to $80 each for such fine examples of hand-loomed textile art. 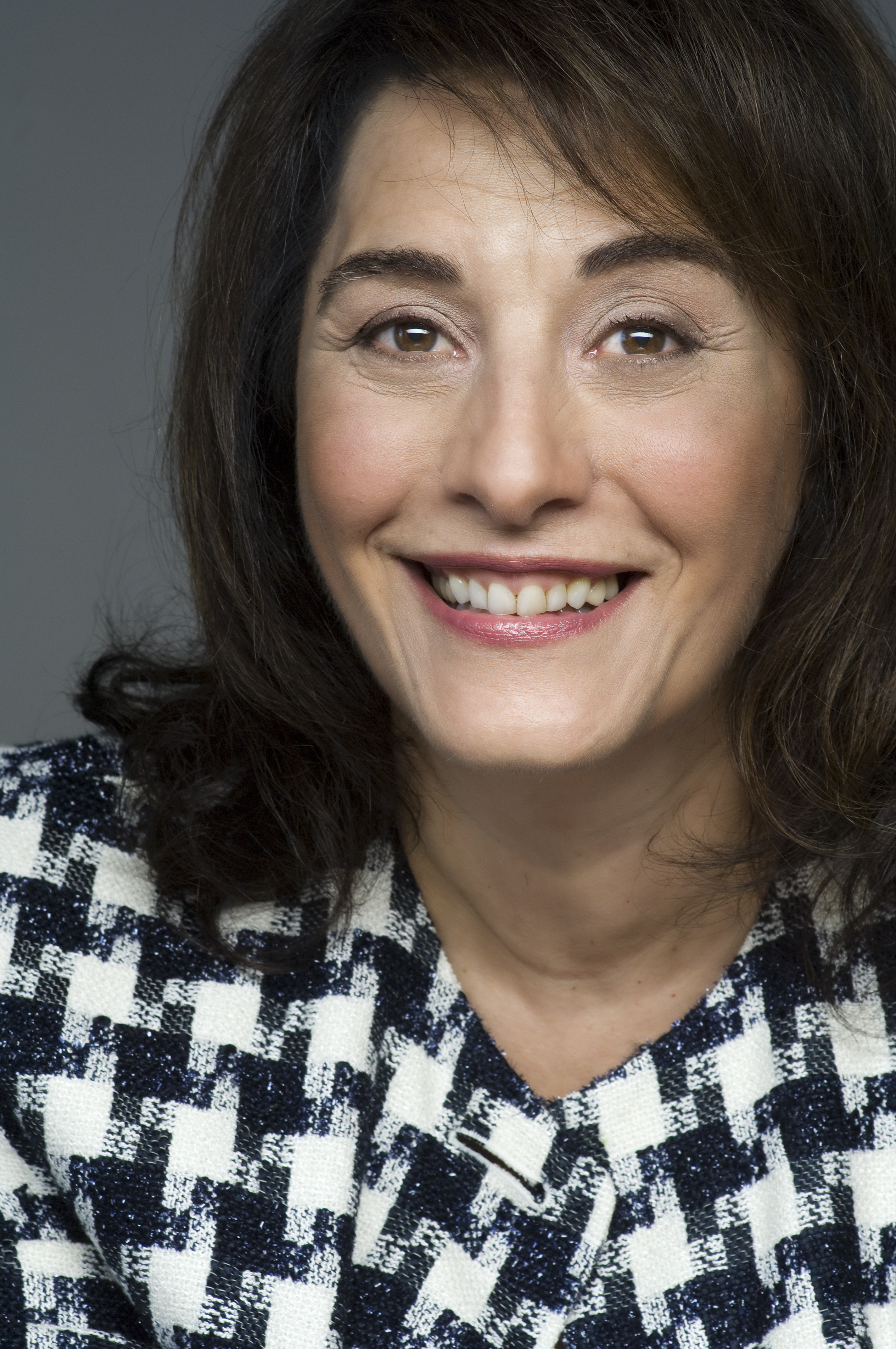 Linda Dyer serves as an appraiser, broker, and consultant in the field of antiques and fine art. She has appeared on the PBS production Antiques Roadshow since season one, which aired in 1997, as an appraiser of Tribal Arts.
If you would like Linda to appraise one of your antiques, please send a clear, detailed image to antiques@nashvillearts.com. Or send photographs to Antiques, Nashville Arts Magazine, 644 West Iris Dr.,  Nashville, TN 37204.