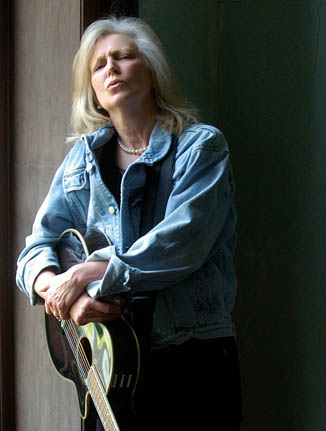 On June 29, I was scheduled to play in the round at the Bluebird Café with Tommy Womack, Peter Cooper, and Will Kimbrough. Since these guys are good friends and Will played lead guitar on my soon-to-be released CD, I was especially looking forward to this event. Then I heard Kimbrough had to bow out. He’d been summoned to do something with Jimmy Buffett. As every musician knows (myself included), a call from Buffett is a call that can’t be ignored.

The night of the gig, I was the last to arrive. As a result, I ended up wedged in a chair between Tommy Womack and some guy in a cowboy hat whom I assumed was one of The Wrights.

Then I noticed the threads in my mic stand were stripped. When I tried to tighten the adaptor, the boom started swinging around like a crane gone berserk.

This situation, combined with my usual pre-show jitters, had me feeling a bit, well . . . testy. I immediately vented my frustration, voicing my hope that proceeds from tonight’s performance would go toward upgrading the Bluebird’s equipment (like this godforsaken mic stand!). At that point, the guy in the cowboy hat (whom I later learned was not one of The Wrights, but a guitarist-songwriter named Jon Byrd) said, “Why don’t we trade mic stands?” He then set about switching them out. I watched in fascination as he calmly secured my faulty stand with duck tape. (Why didn’t I think of that?) The way he did this, without calling attention to himself, had me thinking, Whoever this dude is, I’m startin’ to dig him.

Of course, the gig turned out heavenly. Tommy sang “Nice Day,” Peter sang “Suffer a Fool” (which he co-wrote with Don Schlitz), Jon Byrd provided tasteful accompaniment on his Telecaster, and the young woman sitting across from me, Shannon Wright, sang  “Since You Left Me,” which completely blew me away. In fact, every song she sang blew me away. Including a wonderfully original version of Roger Miller’s “In the Summertime.” (I later learned that “The Wrights” are a highly respected husband-wife duo. And that Shannon was the only Wright present for tonight’s performance. Husband Adam had to attend a baseball game.)

By the end of the night everybody loved everybody. Shannon and I exchanged books and CDs, and now The Wrights’ last two CDs have been on heavy rotation in my house ever since. Last week, Shannon and I got together and wrote a groovy little song called “Let’s Make Waves.”

Sometimes all you have to do is shower and show up.  tallgirl.com