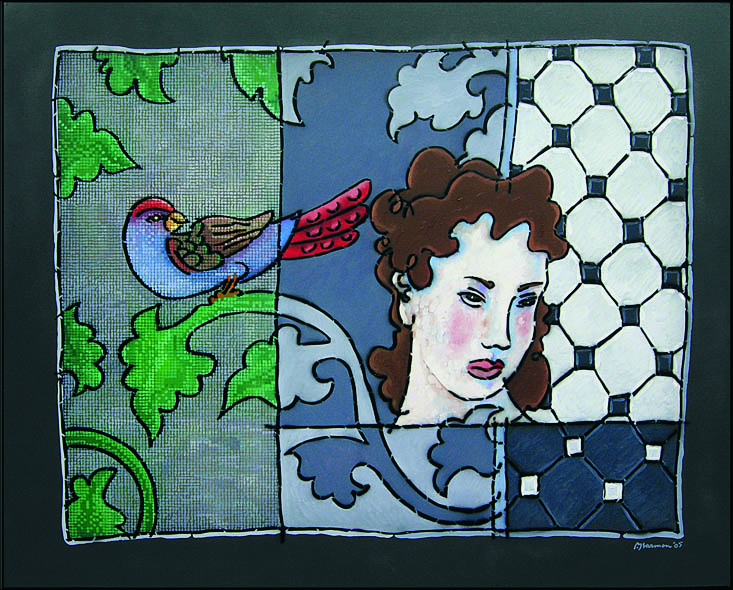 This simple yet profound observation defines the soul and natureof the artist Paul Harmon. For Paul, there simply were no other choices. Art and life became one and the same, each seamlessly weaving into the other like an intricate, flawless tapestry. 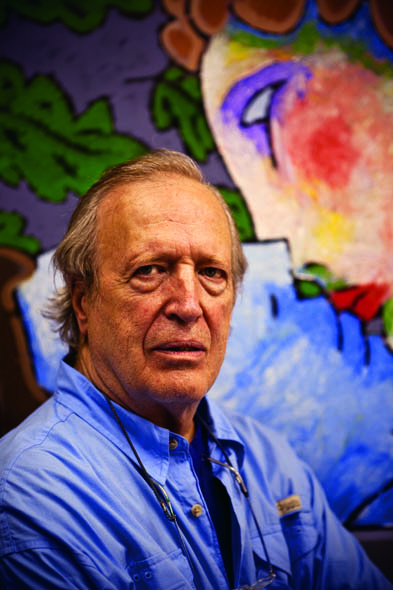 I have known Paul for over thirty-five years, first as a client and then as a friend. What I like most about him is his willingness to share without pretense. He brings a light to our conversations, brilliant in understanding, directed with sincerity because, for Paul, art is not a competition but a sacrament. His acceptance of me early in my career fortified me with the courage to cross my own borders. His advice was never technical. He was too wise for that.

As for his art, I applaud Paul’s use of color. I think he is one of the best colorists in the country. The colors are so rich they have a taste, and they satisfy my tactile needs for texture, making me feel like I am about to sit down to an elegant feast prepared by a fine French chef.

I approach Paul’s work the way I listen to a symphony. At first, I am captured by the complexity of the composition until the rhapsody of the piece overwhelms me and takes me down a path to a far distant, purer, more vibrant world than the reality it temporally holds at bay.

In a town where often the first question asked is “Where are you from?” Paul is unique. He is one of the rare born-and-bred Nashvillians. Over the years Harmon has not only watched the city grow and change but has helped effect that change as well. In 2005, the Nashville Advertising Federation awarded him their highest honor, noting his significant contributions to both the local advertising industry and his community. Remarkably, the same year, Montgomery Bell Academy celebrated Harmon with their Distinguished Alumnus Award. 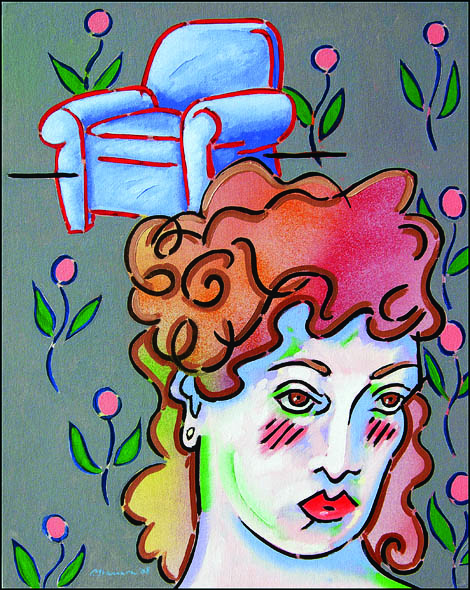 At an early age, Harmon received from his grandmother, herself an accomplished artist, the inspiration and materials necessary to help him develop his muse. His sister, Georganne Harmon, credits their parents for not only offering guidance but also showing a genuine interest in their children’s lives. They read what their children were reading. Talks at the dinner table were lively and thoughtful, much of the conversation inspired by Paul’s love of art and literature. Georganne, a noted poet herself, remembers an older sibling who was curious about everything, an avid collector of ideas and artifacts. The young Harmon was fused with so much natural talent that his parents could do little but observe and guide, but definitely not contain, his enthusiastic curiosity.

Years later, while in college, Harmon decided to go on his walkabout. Vagabonding through Europe, nearly penniless, surviving on his wits, he gained a coveted introduction to meet the great painter Pablo Picasso. However, the night before the arranged introduction, Paul found himself in the company of three young women who offered to take him down to the Italian Riviera.

Feeling confined, Paul didn’t see the need to finish college. Instead, he started his own successful business and raised a family, all the time trying hard not to wander too far from the artist’s path. Accolades came early in his career. The enigmatic artist Biel-Bienne, asked to view a group show at the Parthenon, was taken by the young artist’s work. The Tennessean quoted Biel-Bienne saying, “His drawings struck me as being the work of a mature artist, handling with great skill the complex problems of black and white and colored line drawing. To my surprise, I found the artist was only 21 years old.” Harmon later summoned the courage to meet with the acclaimed master, and the two of them became lifelong friends, with Paul crediting Biel-Bienne as being an important mentor for his artistic development. 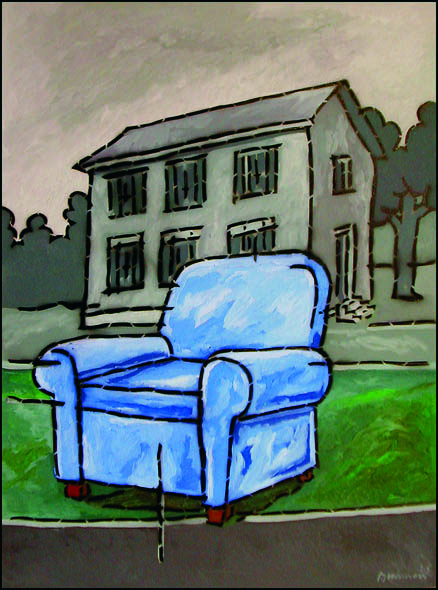 Paul’s reputation grew with one-man shows not only in Nashville at Cheekwood, the Vanderbilt Fine Arts Center, and the Tennessee State Museum, but also at major venues in New York and Washington, with work being shown and honored in Europe and South America.

In the early ’80s, the structure of Paul’s work took a notable new direction with the advent of his use of stencils. Gleaning the idea from the markings on shipping crates, Paul first used the device as a way to encapsulate and thus distinguish the subject from the rest of the painting. His taste for the intermittent lines grew until soon they were framing the entire canvas and much in between. His use of the stencil became so profound that the style of his work became immediately recognizable in much the same way as Warhol’s posterized portraits or Calder’s bold use of brilliant primary colors.

In Harmon’s book Crossing Borders, art scholar Robert McGrath credits Paul’s work with possessing “a unique aura, the product of no other artist.” The critic also marvels at the artist who is “so grounded and yet independent of the Grand Tradition of art.”

His sister, Georganne, offered the possibility of an underlying psychological motive behind his provocative element. She saw such a brilliant, complicated man with so many divergent interests that the stencil provided a structure both physical and intellectual. Boundaries were formed. All hell could break loose on the inside as long as the chaos was contained at the palisade of his sharp-edged lines. 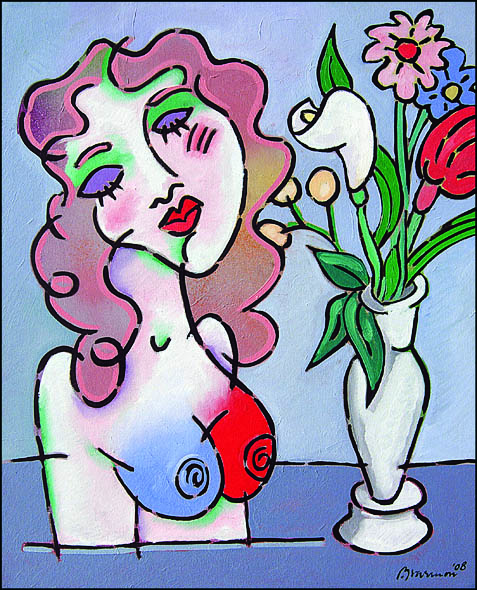 In 1986, Paul extended his working environment by opening a studio in Paris. For the next eleven years he ferried between his studio in Brentwood, Tennessee, and his studio at 1 Boulevard Saint Michel, spending equal time in each. The motive for him was more for revitalization than inspiration. He could have gone anywhere, New York, Berlin, L.A., etc., but the minute he arrived in Paris, he knew he was meant to be there. From previous journeys and his extensive readings of art literature, he felt he already knew the storied, timeless city by heart. Walking into the Les Deux Magots Café, he spotted the exact same booth where Jean-Paul Sartre debated existentialism with Juliette Greco. Harmon thrived and flourished in this culturally rich environment.

The decade in Paris created a cachet of experiences any artist would envy. Harmon garnered numerous awards and honors, including two major awards at the XXIV Prix International d’Art Contemporain de Monte-Carlo and the Art Contemporain, Saint-Martin du Tertre, Val d’Oise, commemorative medal. His work was seen in galleries throughout France, including a major Harmon exhibition in the city of Caen as part of the city’s remembrance of the fiftieth anniversary of the Allied troop invasion of Normandy.

He also had the opportunity to expand his horizon by befriending and engaging numerous art luminaries not within the reach of Nashville. Jean-Michel Folon, Arthur Secunda, Henry Moore, Jean Cavaliero, Julio Siva, and Pierre Marie Brisson all appear on a list of notables. With his good friend, photographer/film maker Jean-Louis Bloch-Lainé, he co-authored the award-winning book Dante’s Stones.

Presently, Paul is back in Brentwood full time, happily married to Karen Roark, a woman he truly cherishes. Now in his seventies, he maintains a painting regimen that amazes even his closest friends. The work flourishes, transforming with his spirit. The hard line stencils have disappeared. Painted lines continue to define the painting, but they are not as restrictive. Subjects are even allowed to roam beyond the lines, “crossing borders” so to speak. He stays in tune with the twenty-first century by incorporating visual elements such as pixelation and selective coloring, offering his own interpretation of popular digital photographic effects.

With over a staggering 1900 finished canvases to his credit, Harmon expresses some surprise as he states that his new work is his best yet. However, that seems to be the way of art. Renowned critic Clement Greenberg once famously stated, “In visual arts, prodigies don’t count. In music and literature, yes, but not in art.” It is through strong will and intellect that Harmon has managed to fly out of the turbulence of youth, over the mountains of success into that rarified air where the pilot has turned off the seatbelt sign while bidding the artist’s subjects to move about the canvas freely. 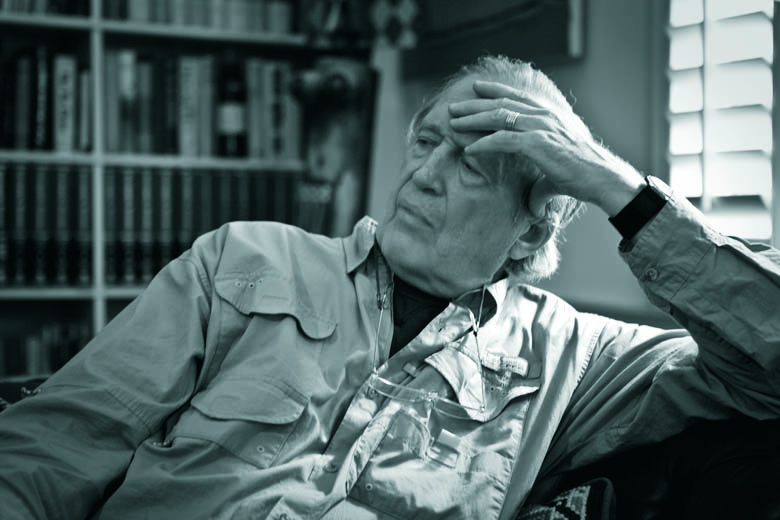 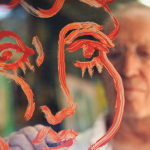 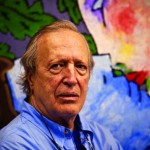 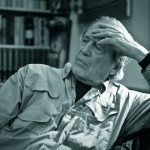 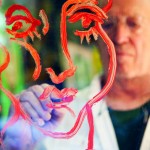 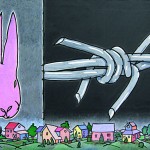 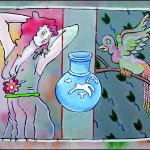 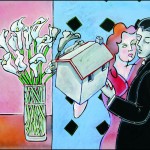 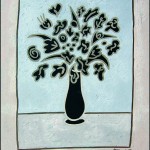 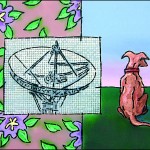 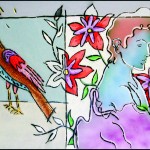 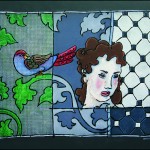 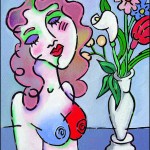 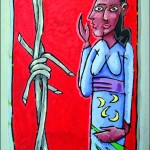 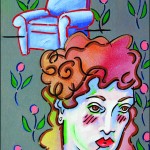 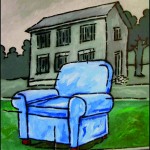