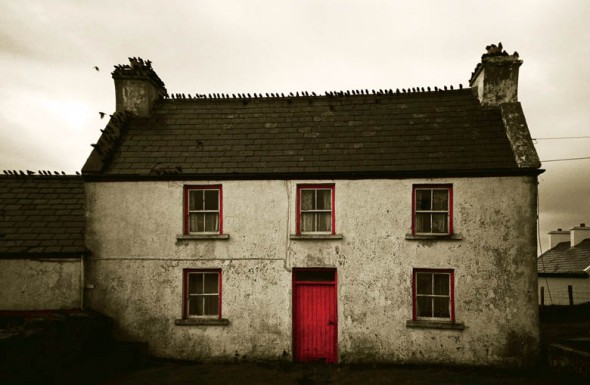 “The entire photographic process is my life’s greatest joy—from the 5:00 a.m. hikes with my camera, the weeks spent lying on the cliff edges in the horizontal rain waiting for a momentary miracle of sunlight and wings, the thousands of hours spent making careful adjustments to the negatives using only Adobe Photoshop and a pint of Guinness, to the moment the image dries and is held up to my favorite light bulb.”

These images come from John Michael Nikolai, a man who walks in his own stratosphere—literally. Standing at 6’9”, his brow crosses into a threshold few people see.

Captured in scenes from his trips to Ireland, many of his compositions include a solitary bird, a reminder of personal freedom that is a recurring theme in Nikolai’s work and in his development as an artist. Cliffs, churches, rock walls, solitary trees take on a powerful charge honoring Ireland’s historic tradition, while also conjuring up themes in life with enduring meaning.

“These are all places completely exposed to the elements and at the mercy of weather. ‘The Loneliest Tree in Donegal’ fell victim to the wind sometime between my visits to her in 2004 and 2006. More recently, one of my favorite ledges to plant a tripod on at the Cliffs of Moher plummeted into the ocean six hundred feet below. The hands on the sculpture of Mary at the summit of the Minaun are missing several fingers. And if global warming theorists are proved correct, my beloved town of Keel will become another Atlantis. So we must make the very best of our moments together. 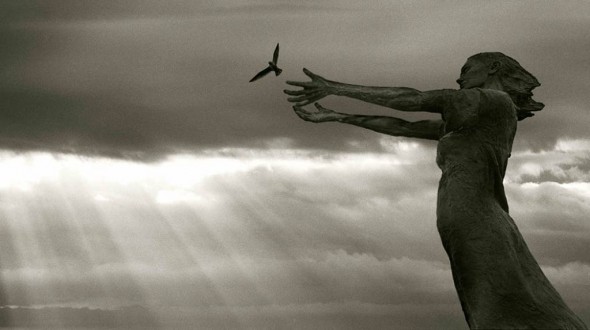 “Over time, these images have become a lucid backdrop for my daydreams. I have been fortunate to earn a return ticket to many of these places, and my revisits often take on a surreal quality as I wander through the landscape of a world that has been stretched to the brink of fiction in my mind.”

His process for creating his images is a very time-consuming, expensive, and backbreaking one that makes it impossible for him to print more than a few per day.

Early in his development as a photographer, Nikolai was influenced by another legendary Nashville photographer, Jim McGuire, whose life’s work has spanned over forty years. Nikolai learned much about the craft of making photography while working closely with McGuire as his assistant for a number of years.

“Jim McGuire represents everything I love about Nashville. He’s one of the most powerful spirits in this town. Over the course of forty years he’s kept that fabric a constant and woven a timeless quilt of memories with it. He has created an immortal example of why all great portraiture is self-portraiture.” McGuire has continued to be a constant source of knowledge, inspiration, and friendship to Nikolai through the years. 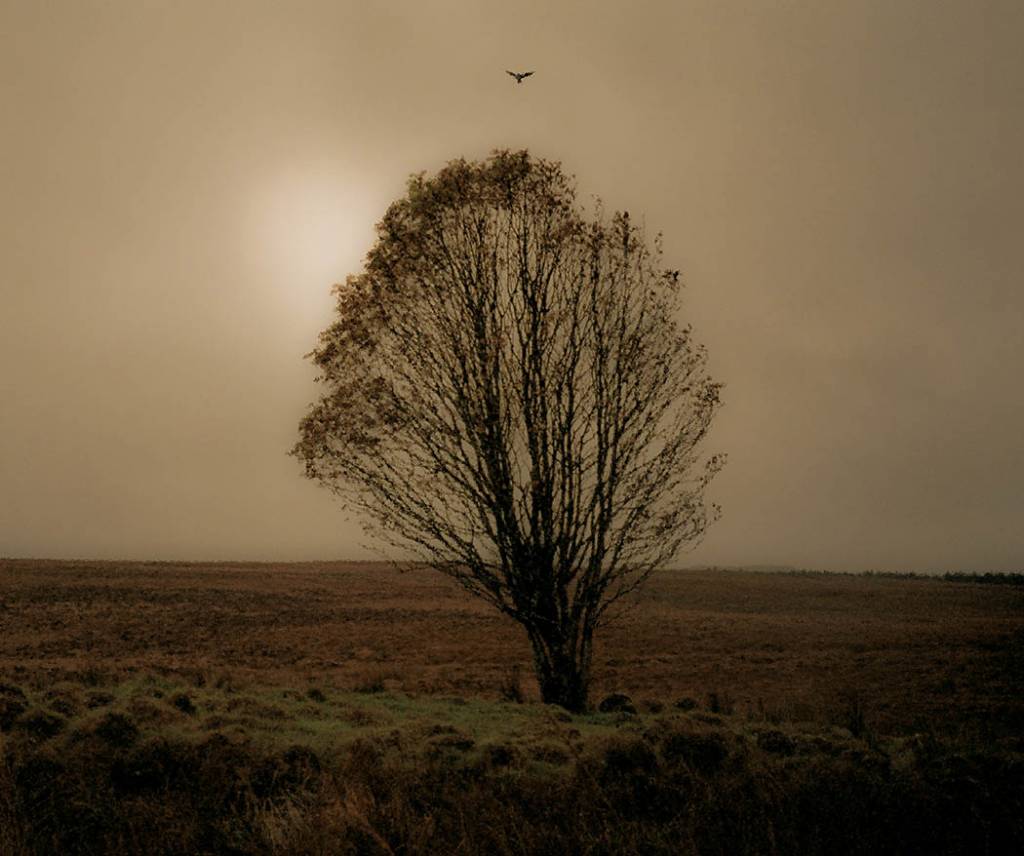 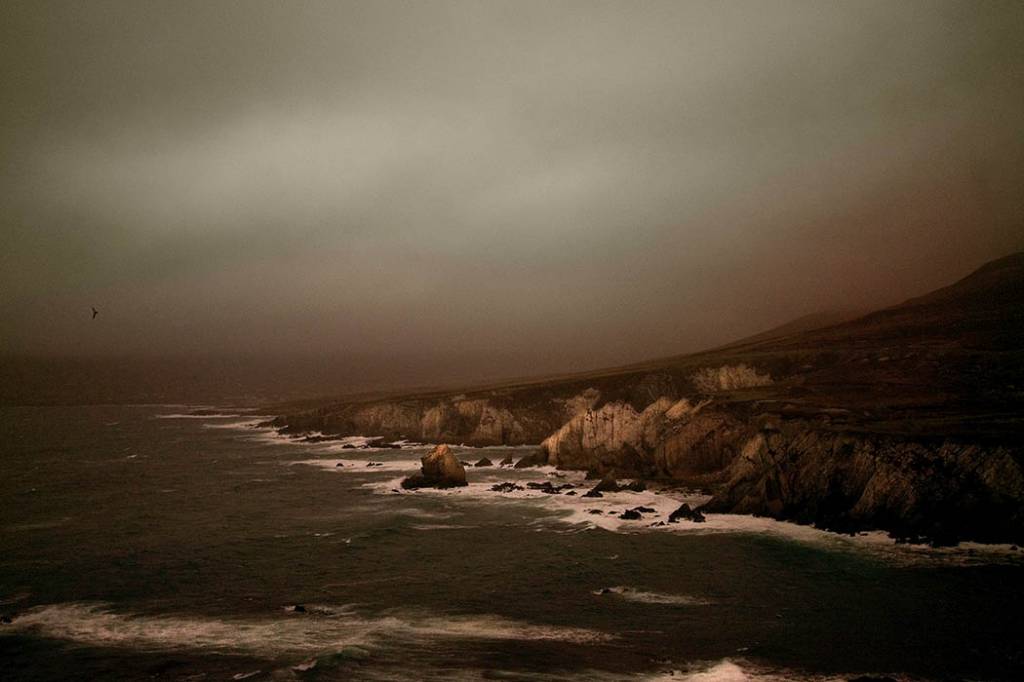 “I am also so inspired by the focus of John Baeder’s paintings and his lifelong dedication to preserving in oil and watercolor everything he values most. While I was at Princeton, the first slide the professor projected onto the movie screen behind her during my first lecture in my first art history class was one of John’s oil paintings, Dot’s Diner. So it was a huge moment for me when Jim McGuire introduced me to Baeder one night at the Station Inn.”

For a man whose very size invokes notions of physical stability, John Nikolai relies more on his artist’s heart than his stature to capture thoughtful and evocative images. When he does so, he gives us all a different view of the world around us. 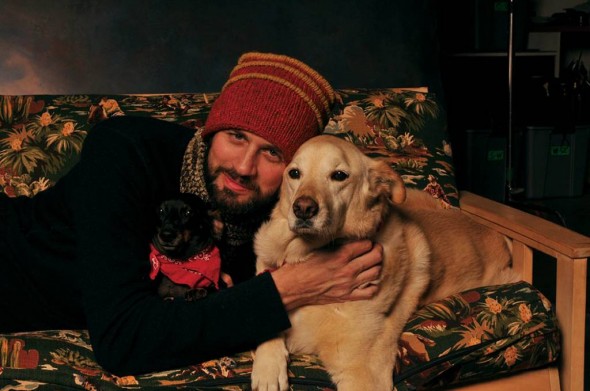 John Nikolai with Ginger and Lucky