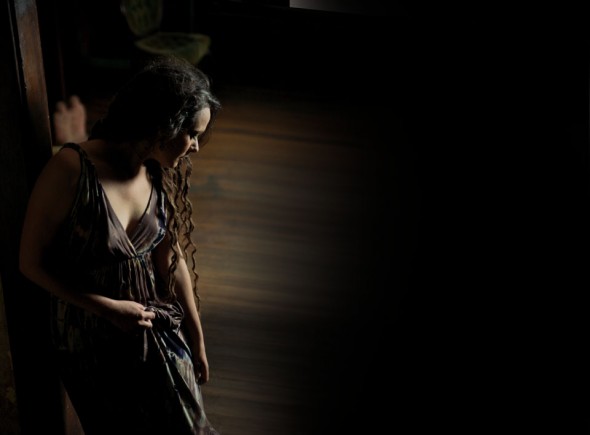 Sunday nights can be slow in Sylvan Park. But behind Charlotte Avenue’s dark storefronts, across N. 49th Street from Betty’s Grill, a light shines over the entryway into the Global Education Center. Step inside and you’re in a spacious, open room, with mirrored walls making it seem even larger. If you arrive on time at 7:30, you may be welcomed with a hug from one of the great jazz singers of our time, here to host an innovative weekly program for vocalists from all walks of music in Music City.

On this particular Sunday, Annie Sellick wears an off-white skirt and top, comfortable, well suited for movement as well as sitting cross-legged in the centering exercise that kicks off the evening’s events. Participants join her there, in the middle of the floor, being still, breathing slowly and deeply together, and eventually stretching, rising, and beginning the experience they call the Singing Circle.

Because most of the attendees are singers, they aren’t inhibited by the thought of vocalizing in public. But this is also a hurdle in that everyone arrives with a preconception of what kind of singer they are, be it jazz, country, or whatever. The first step, then, is to set aside those self-perceptions through those meditative opening moments. Once that’s been addressed, extraordinary things can happen.

“What I want you to do,” Sellick begins once they’re back on their feet, “is to close your eyes and think of a note. Once you have it, sing it. It doesn’t matter what anyone else’s note is; just stay with yours and listen to what happens around you. When you take another breath, you can sing the same note or pick another one. And keep listening.”

After a brief silence, everyone begins to do just that. A fantastical, wordless chord begins to bloom and evolve as individual parts change at different times. One moment the harmonies bristle in dissonance, in the fashion of György Ligeti’s Requiem—the choral piece marking the dawn of intelligence in 2001: A Space Odyssey. Later, consonant intervals appear, with other parts expanding it like branches from the trunk of a tree. Now and then several people sing identical notes, which feel like small miracles as the group intuitively creates its identity.

“I signed up for Singing Circle a couple of months ago because I’ve always wanted to try a lot of things onstage but I never had the confidence to do it, to improvise up there in front of everybody,” says Jennifer Henderson, lead singer for the Nashville-based neo-soul band Theo Cas. “I just stayed in my comfort zone. But since I’ve been doing Singing Circle, I can definitely tell that I’m pushing those boundaries. What’s great is that when someone new comes in, something happens in that room that makes you feel like you’ve been singing with them forever. And now I feel a lot more in tune with my band, like we’re all one entity.”

The experience is equally powerful for Sellick. She has gone far in the international jazz world since her days of working frequently at F. Scott’s, Virago on a weekly “Sellick & Sushi” gig, and other local venues. As her fan base grew, she widened her field, appearing throughout the United States as well as in Germany, Japan, and beyond. Performances and recordings with luminaries such as Jeff Hamilton, Joey De Francesco, Gerald Clayton, Mark O’Connor, and Eddie Higgins have attracted fans and critics, who take note of her strong feel for swing, her flair for improvisation, her pure but expressive tonality and phrasing, her broad range (covering all points from big bands through Parisian swing to bossa nova sung in Portuguese), and compelling personality onstage—a mix of playfulness, warmth, and an ability to bond instantly with audiences.

Yet even as her renown grew, something was missing. “I’ve been pursuing my own thing and going out of town a lot,” Sellick says. “All of a sudden, after a few years, I’m not connected to anything anymore. I was like, ‘I miss Nashville.’ I wanted to give something back by bringing singers here together.”

Her plan took shape through a week-long workshop conducted in Hawaii by Rhiannon, whose virtuosity as an improvising vocalist was nurtured through her association with Bobby McFerrin’s a cappella Voicestra. “All the singers felt a sense of community and such freedom and fun in a network of support in a way I’ve never seen singers come together and do,” Sellick says. “It’s something I wanted to introduce here.”

This workshop affected Sellick’s approach to both singing and entertaining, specifically in terms of getting the audience involved. “For example, if I’m in a listening venue, I might split them up,” she says. “I’ll say to one half of the room, ‘You sing this part.’ I’ll have the other half sing another part. And I’ll sing ‘Fever’ over it. Or I’ll use the audience as instruments. I did a Maya Angelou poem called Woman Work. It’s like, ‘I’ve got the children to tend/the clothes to mend/the floor to mop/the food to shop/Then the chicken to fry/the baby to dry …’ So I say to the drummer …”

This technique illuminates the Singing Circle on that Sunday night, as Sellick asks one of the group to invent a two-bar phrase—it could be a drum-like pulse or a fragment of melody, repeating it again and again. The next person in the Circle comes up with something to complement that and so on until the original motif amplifies into a fully arranged statement. As each part is introduced, Sellick listens, leaning toward the person, giving advice when needed, pulling the air toward her as if to encourage the idea to awaken, and then nodding her satisfaction as another link hooks into the vocal chain.

Not every Circle is structured the same. Consistent with the premise of being in the moment and improvising based on what you feel and hear, other exercises might take the place of something undertaken the previous week. Much depends on who shows up as well as how many. “I always walk in with a plan, but the challenge is that I don’t always know how many people are going to be there,” she says. “I might have one person. I might have ten. Ideally, I want ten or twelve every week. But I tailor it to who comes in. I might say, ‘Okay, somebody start a vamp, whatever you want—but it can only be one note.’ So maybe they’ll go . . . ” And here she articulates a rhythm on a single pitch, like a swinging riff in Morse code.

“I’ll say, ‘Everybody sing that,’” she continues. “Then we look for grooves by really listening to each other. Or we might sing scales up and down, singing each note between the beats. We can play with intervals. It can be used for ear training. We can hold onto long notes, feel the tension and dissonance and talk about what chords are made of. The thing is, if you’re bored, it’s your fault because there’s always some musical nuance to pay attention to and grasp and love.”

Sellick still takes and gives improvisation workshops outside of Nashville. She and Jennifer Hamaday, author of The Art of Singing: Discovering and Developing Your True Voice, recently co-facilitated “Soul and Song in May,” a singers’ retreat in Bon Aqua, Tennessee, focusing on improvisation and authenticity. She does plenty of shows as well as recording. Her latest album Kiss Kiss Bang Bang, a collaboration with percussionist Akira Tana on jazz arrangements of James Bond themes, just recently released on iTunes, and another album which features original material is in the chute.

But having reconnected with her hometown, Sellick vows to make Singing Circle a touchstone in her schedule, insisting, “I’m doing my darndest to make it work because it’s that important to me.”

Annie will be holding her next Singing Circle retreat October 21, 22, and 23, 2011. She is also holding singing circles every Sunday for 5-week sessions at a time. Singers who want to learn more can visit AnnieSellick.com, email info@AnnieSellick.com, or contact the Global Education Center at 292-3023 or GlobalEducationCenter@juno.com.