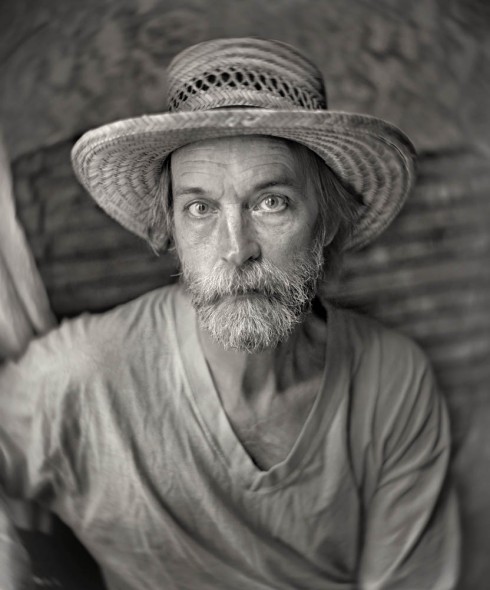 As a photographer, Jimmy Abegg is a collector of moments. In Abegg’s latest abstract paintings, however, still moments take a back seat to the movement between them, and his new paintings evoke this flow with their frenetic, color-saturated, wide-swept brushstrokes. Everything moves or suggests movement. Flow is a key feature of Abegg’s art. The undulation is a leitmotif that connects the various materials and media used by the artist and carries the viewer from one piece to the next.

“If you own one of my paintings, it owns the room,” Abegg said as he motioned to a canvas almost as tall as he is and four times his width. The piece’s combination of teal, gray, gold, black, and fiery-red oil paints creates a layered, multi-dimensional effect. The swirls of black, up and down, around, and in the middle of the painting add to this topography and evoke a serpentine edginess, as if something tightly coiled has been sprung loose, free to stretch and play.

Playful, in fact, is one of several words that aptly describe Abegg’s paintings, though there’s nothing childish about them. These works are infused with energy and surprise, pools and sharply cut shapes dueling for our attention as well as, unexpectedly, balancing each other out. One might predict that the sheer breadth of activity and movement captured on the canvases would be overwhelming and hard to absorb, but there’s also something contagious about the works’ motion and inspiring, calling to mind two painters, Rothko and Picasso, whom Abegg names as influences.

In his signature straw hat and denim overalls pulled over a clean, white t-shirt, Abegg gave us a tour around his studio. The East Nashville resident works on the west side, in a vast, beautiful, creaky space on Chestnut Street shared with four other artists who, luckily for him, are rarely there. Except for his gray beard, Abegg appears a decade younger than his age, which he puts at “56 or 57, I think.”

Abegg, who’s gone by Jimmy since childhood, started painting at age 10. Born in rural Nebraska, Abegg grew up in a Catholic family with four siblings and eighty-five first cousins on his father’s side. Referring to his early artistic style, Abegg said, “I didn’t go to school for anything; I tend to make it up as I go.” The career he’s made for himself is a mosaic, so in addition to the straw one atop his head, it might be said that Abegg wears many other hats: musician, photographer, painter, sculptor, and designer. He described himself, modestly, as “virtually unemployable,” but his record as a self-made and prodigious, full-time artist speaks for itself.

For several decades, he played lead guitar in California bands and then based in Nashville, but that skill he described as one that came naturally. “I never worked at being a guitarist,” he said with a shrug. “With [visual] art, I have to really work at it.”

Work at it he has. His studio is as filled with artwork as Noah’s ark was filled with animals. Lining the high walls and organized in neat, tall piles are oils on paper layered with linen, oils on canvas of varying sizes, charcoal drawings, cardboard sculptures shaped like miniature guitars, an enormous aerial photograph of Nashville, watercolors, and old art magazines from the ’80s and ’90s. Abegg called himself “easily distracted,” but another way of looking at it would be that he’s hugely, wildly, maybe even crazily ambitious. But his ambitions have leaned not toward material gain but to creating and exploring among his chosen media. “Money has never been interesting to me,” he said. “If it were, I think I’d have made some by now.” So he may not have health insurance, but he does have an enormous cache of life experiences and stories.

“I have had a lot of regular jobs,” he allowed, but by and large he’s sowed his way with art and music. Starting close to forty years ago, with a band called Panacea, Abegg began to earn his living by performing. “In the ’70s you could play for a place to stay and meals,” he said, and his peripatetic lifestyle brought him to Southern California. There, playing Christian folk rock, he met his wife of thirty-three years, Michelle. The two moved to Nashville in 1989, when Abegg was playing with a man named Charlie Peacock. As he and Michelle had three daughters, now 24, 26, and 30, constantly having to be touring wore him out. “With music,” he said, “if you’re successful, it means you’re gone.” He finally tethered himself to town by taking a job as an art director and designer at a record company and by buying a house in East Nashville. “I never dreamed of being able to buy a house,” Abegg offered, adding that one appeal of being here is the “super-low cost of living.”

Of himself and Michelle, a fashion designer who manages a textile store, Abegg said, “We’re weirdos, frankly.” Their “weird” predilections include a passion for healthy, local food. They’ve passed on their passion for creating art to their daughters. Alexia is, according to Abegg, an “uber-seamstress,” Pierrette a graphic designer, and Jemima, as a teenager, played in a band called Be Your Own Pet. Like his parents before him, Abegg made family a priority, and his unstructured lifestyle has turned out to be quite structurally sound. He recently left his Nashville gallery of fifteen years and is in search of representation, but Abegg is unruffled. “I’m broke,” he allowed, “but I’m the happiest guy I know.” Does he have any complaints, we asked. He looked thoughtful. “Well,” he said, “I do want a peach right about now.”

He’s fixated on creating more work, which he’s doing in spades, and he does show work—mostly landscapes—year round in a Sewanee gallery. “All I’m interested in is making art and making music and taking photographs,” he said before describing a future project for which he envisions making a book of his art that includes a record of ten original songs. His advice for young artists is simple: “Do good work.” Opportunity and circumstance you can’t control, he explained, but the work you can.

As for his current source of inspiration, Abegg says it’s a combination of his friends’ work and great artists. Among the latter, he named painters Wolf Kahn, Susan Rothenberg, and Paul Klee. Photography still consumes an appreciable portion of his efforts. About three times a month he does a “music job,” which entails taking the photos and designing artwork for a CD. Once a week he has an art night with two friends, and the three get together and produce work. There, lately, he’s been doing charcoal drawings of “outsiderish,” tentative, fragile faces. The drawings are striking, and the faces express eerily lifelike emotions, hungry for connection.

Abegg plans to continue producing more and more work, and he’s in the studio five afternoons a week. “I know art is a luxury,” he said, “and when someone buys a piece of mine I feel really lucky. And it’s a gift to both of us: They get art and I get to keep making it.”