Besides being an explosive device used to celebrate America’s Independence Day, a firecracker can also describe a person full to the brim with energy. This word perfectly illustrates the energetic artist and community activist Andee Rudloff. Like a firecracker, Rudloff approaches everything with the excitement of sparking the fuse, illumination followed by lingering smoke. Her creativity inspires people, leaving remnants of thoughts to contemplate long after the art is completed.

A native of Bowling Green, Kentucky, Rudloff attended the University of Mississippi before graduating from the University of South Florida with a bachelor of arts in fine art. After working for the Newport Harbor Art Museum in California, Rudloff moved back to the South and joined the Nashville community.

An avid painter, Rudloff creates artwork in a bright, explosive style with themes relating to the idea of celebration. One series focuses on cakes of gigantic scale literally bursting to the edges of the picture plane. The bright colors with heavy, black, contour lines delineate each cake layer with a Keith Haring-like sensibility. While many are painted on traditional canvases, Rudloff also paints on nontraditional material like fencing, which adds to the festive feel reminiscent of signage at state fairs.

Rudloff also facilitates art, the best known being large-scale murals with communities and nonprofit groups like the Oasis Center, Safe Haven, and the East Nashville Tomato Festival. She begins the murals by collecting simple icon drawings from the public that illustrate a word descriptive of their community. Once the imagery has simmered, Rudloff arranges the public’s drawings into a composition.

Each mural mimics Rudloff’s style with vivid colors and heavy, black lines, but using the public’s images and inviting them to be active artists allows a “bigger conversation, which means a bigger impact.” Through the murals, she is throwing a party for the community and igniting a dialogue.

Her positive nature is also why these murals are turning up all over town. As Judy Freudenthal, Director of Youth Engagement and Action at the Oasis Center, states, “If you have driven by the Convention Center construction fence, Andee’s imprint is there in the symbols of hope, safety, and unity.”

In addition to Rudloff’s energetic community involvement, she has an impressive professional resume. Currently, Rudloff is the Education and Visual Arts Director at the Southern Kentucky Performing Arts Center (SKyPAC) in Bowling Green, Kentucky, which also allows for a direct community impact as she plans programming, field trips, art classes, and more.

Rudloff believes that we can’t take the art with us once we are gone, so it is important to give away ownership to the greater populace. As metro councilman Peter Westerholm states,

Andee brings an unabashed enthusiasm . . . that leads not only to inspiring a vision toward the end result but makes recruits of unintentional bystanders, making us all stakeholders and advocates.

A prolific worker, Rudloff has multiple projects on the burner for this fall, including organizing a community mural at Kay Bob’s in Hillsboro Village, creating artwork for the 100 Years of Shelby Invitational exhibition, and stenciling art on the greenway for the Nashville Ultra Race.

Rudloff has the power to spark ideas and creativity in all of us! 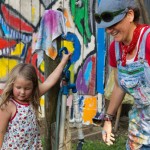 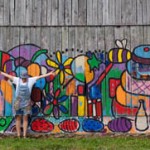 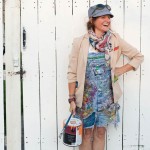 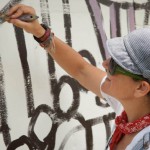