Scientific Collectible, Brass Microscope by Stiassnie,Turn of the 20th Century 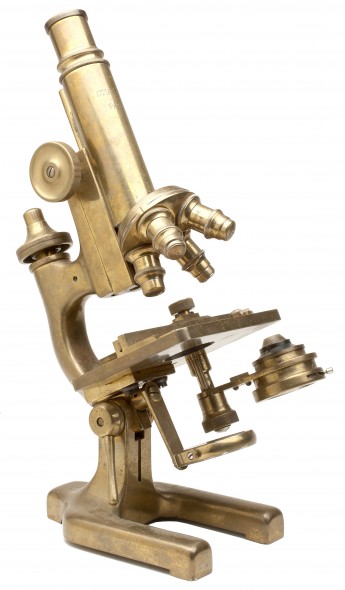 Scientific instruments have been systematically collected as attractive and interesting objects from the past and as material evidence of the development of science throughout the centuries.

Items that fall under this heading include, but are not limited to, sextons, compasses, barometers, generators, vacuum tubes, calculators, and all forms of optical equipment, such as cameras, telescopes, and the subject at hand, microscopes.

Evaluating an instrument of this nature should be reserved for a specialist in the field of scientific collectibles. There are many factors (and parts) to consider. Lens gauges, aplanatic swing-out condensers, camera lucidas, abbe-type stereoscopic eyepieces, and apertures—Oh my!

The microscope presented for evaluation bears only two identification marks, the first is “M. Stiassnie Paris.”

Maurice Stiassnie was the son-in-law of Paris-based microscope maker, Constant Verick. Verick and Stiassnie formed a partnership in 1882, only to have it dissolve between 1885 and 1895. Stiassnie, continuing in his craft with a change of address to “204, boulevard Raspail, Paris,” began marking his works “M. Stiassnie, Paris”. The company held its market until after World War II but closed shortly after, unable to compete with post WWII German production. The second mark is simply, “oculaire compens” which loosely translates to “eyepiece.”

Similar examples, and I stress similar, have appeared on the auction market. A few resemble the presented instrument, with its tapering, curved limb and tripod base, the four objectives in quadruple nosepiece, complete with sub-stage condenser and plano-concave mirror. Those few have achieved two to three hundred dollars at auction. Again, this is where I stress my point all parts may not be equal, “what would you pay to have such a stately brass object gracing your home?”

Should the owner of this piece be considering it for sale, I would refer them to a specialist in the field for a pre-sale estimate. Skinner, Inc. of Boston has a specialty department that covers science and technology.

For as long as people have been able to travel for pleasure, they have chosen to bring home a memento of their journey, be it seashells, barbecue sauce…or art.

Even the most expensive work by Venetian painter Canaletto, for example, started out as a 19th century Grand Tour souvenir. Certainly not all, or even many, of the paintings acquired from Grand Tour travels have become stars of the international art market, but they all remain fond mementos of a travel adventure.

This brings us to this painting signed and identified “J Jachym,” “Benátky.” Limited information is to be found regarding the Czechoslovakian painter, Jan Jachym: a birthdate of 1874 and the description “landscape painter.”

“Benátky” implies that the intimate meeting under the archway depicts a town on the Jizera River in the Central Bohemian Region of today’s Czech Republic. A dominate architectural feature throughout this town is the classic Roman arch, especially along Benátky Grand Canal.

Jachym’s recorded secondary market sales are two, to be exact, each from the first decade of the twenty first century and both for landscape paintings sold at an auction house located in Prague. The achieved sums were four hundred and eight hundred dollars for paintings of similar size and subject matter as this example.

It is my opinion that if this oil painting were offered on the US market, its pre-sale estimate would be in the two to three hundred dollar range.

Click here to view this article in our full online Magazine