Local gallery owner Nina Kuzina welcomes the work of a historic American painter to her Nashville boutique. Kuzina is hosting a special show of works by Sterling Strauser (1907–1995). The artist hailed from small-town Pennsylvania, and his work became a staple in the holdings of Nashville’s Lyzon Gallery through the continued support and patronage of Lyzon founder Myron King. Recently, Kuzina and Ron King talked about the scores of Strauser paintings that are now available to the public, sharing the story behind the collection with Nashville Arts Magazine.

King explains that his father developed a friendship with David Berliuk, a neighbor of his parents in New England. It was through his relationship with Berliuk that Myron King became a supporter of Strauser. King relates, “Berliuk found Sterling and said isn’t it wonderful to find this man in this quaint little village. At the time, Strauser was an office manager in a boiler works.” Both Berliuk and the elder King were impressed with Strauser’s untrained, natural style. King continues, “The self-taught nature is what allowed him to have freedom.”

Lyzon Gallery sold Strauser’s work for over thirty years, and King still holds a treasure trove of paintings that has never been open to the public. This summer, he offered Kuzina, a Strauser collector herself, the opportunity to sell the original paintings through her gallery. Kuzina says, “I am absolutely honored and thrilled because I’ve had a relationship with Ron and Lynn King at Lyzon Gallery for many years. We have in excess of one hundred paintings, most of which have never been viewed by anyone.” When asked about his favorite qualities in Strauser’s paintings, King replies, “It’s the color combinations and some of the marbleized swirls. That jewel-like quality in the colors. The ability to draw so simply shows his mastery at work.” 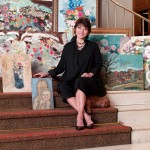 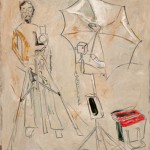 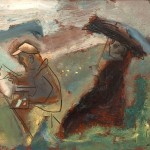 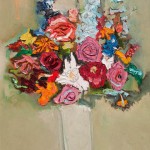