Whispers, Gallery One’s first show of the fall season, pairs two artists whose work is very different, yet complementary. Long affiliated with the gallery, Middle Tennessee painter Rebecca Ruegger branches off into new territory with a shift in medium, while Asheville-based painter Steven Seinberg is making his Nashville debut. “I can visualize the work showing together,” Gallery One’s Shelley McBurney says. “There’s a complexity, quietness, and organic quality to both artists’ work.”

McBurney says the subtle and muted essence of Steven Seinberg’s abstract paintings led her to fall in love with the work. “I’m drawn to that, work that is contemplative,” she says. Around eight of Seinberg’s oil-on-canvas paintings spanning the last few years will be on view in Whispers.

Seinberg imbues the canvases with a sense of movement that parallels that of flowing rivers. His goal is to capture a long time period in the life of the waterways and their ecosystems.

“The thing about the river that always draws me is this kind of continuous, almost effortless movement; everything is moving forward,” Seinberg says. His paintings have a watery, floating feeling as layers of barely discernable elements blend into mere suggestions of imagery and color. In the diptych Flow Through, bits of writing rendered in graphite look more like river debris or perhaps silhouettes of birds than readable text. Seinberg considers the text to be another line-making tool as the specific words are obscured in the process of creating the painting. Their form mimics the drips of paint that are part of each of his works.

Even with their diminished legibility, the words—snatches of his thoughts or lines from poetry—retain their significance for the painter. Poetry, Seinberg finds, fits the rhythm of his paintings. Poems are also the source of many of the pictures’ titles. Whatever Is Not Stone Is Light, for example, comes from a work by Octavio Paz, one of Seinberg’s favorite poets.

The painting is one of a series based on the poem and consists of a large expanse of cloud-like grayness through which the title words float, legible but smeared, as though washed away by water. A low horizon sits above large ovals of paint at the bottom of the piece, a reference to river stones. “That line in particular just fits what I was looking at, being interested in the different times of day and the light on the water,” he says.

Though Seinberg spends a lot of time on rivers—fly-fishing, traversing them on boats, or walking along the banks—and shoots a lot of source photos, once he starts painting, he works more from what’s in his head, aiming to capture a feeling of the subject rather than a direct depiction of it. “At a certain point it switches from almost abstract expressionist painting to looking at the movement and making order of it,” he says. “A lot of it is looking and not painting sometimes.”

Two things led to Ruegger’s foray into sculpture: conversations with a fellow artist and the discerning eye of one of her dogs. Max, her 135-pound Lab, has a habit of depositing a treasured stick onto a pile on the back porch after every traipse through the Middle Tennessee countryside where Ruegger lives and works. One day Ruegger looked at the pile and saw “a little head, little arms and legs sticking out.” This followed closely after a series of discussions between Ruegger and woodturner Brenda Stein about vision, artistic process, and inspiration that had Ruegger thinking about what she might want to do if she worked in wood rather than watercolor and oil.

She suddenly thought, that’s an unusual pile of wood; why don’t you just give it a try? So she did. A friend bought the first piece, and Ruegger was encouraged to share her new direction with McBurney, who expressed interest. She plans to exhibit nine or ten sculptures in the Whispers show.

The sculptures feature anthropomorphic interpretations of unspecified mammals—some have deerlike heads and limbs, others have long, rabbity ears. Ruegger is also working on pieces where leaves grow out of human heads. She uses modeling clay to make any parts she can’t carve, and she’s not afraid to mix different woods in one piece. “I have no problem with attaching an arm from one tree and a leg from a willow or a leg that’s oak,” she says.

In Change, what Ruegger describes as a “little being” is undergoing a metamorphosis. The creature kneels like a fawn or colt that’s still unsure of its legs—the pose is not unlike that of a ballerina kneeling on one knee—while branches shoot from the back of a corset (“new life, new growth,” Ruegger explains). The piece is around a foot tall; pieces in the show range from this size to just under three feet tall.

Ruegger’s sculptures have painterly patinas, warm, brown tones drawn from the wood and other found objects and sometimes enhanced by staining or dyeing. The found components also suggest the compositions. For example, Prayer Without Words began as two sticks brought to Ruegger by a friend. Their form suggested the torso and legs of a walking figure, which is exactly what they became in the finished piece. The long, lean figure stands astride a pile of brambles while lifting an offering skyward.

Similar in composition is Self-Rising Flower, which grew out of a rusty can Ruegger found in a burn pile while out walking. Next she found the sinuous piece of wood that became the torso of the creature rising out of the can. Strands of beads are intertwined with a pile of thorns at the base. The broken chain around its neck represents the idea of freedom, of someone or something taking care of things on its own.

Though there is a story behind each piece and a reason for every element on them, Ruegger prefers not to reveal the specifics. “I want the viewer to bring their own life story to the work and connect with it in some way,” Ruegger says. 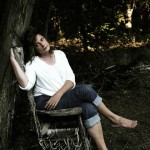 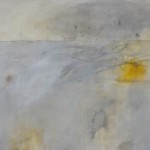 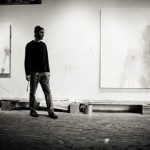