Jack Hastings did not set out to become an artist. Arlyn Ende always knew she would be. Her “dreamy Southern childhood” found her scribbling on every available surface. Hastings, who grew up moving around the country as the son of an itinerant dredge boat captain, casts a realist’s cold eye on the world.

Ende sees beauty all around her. Her bold, abstract, artistic language is inspired equally by nature’s fleeting cycles and the intellectual weight of poetry. She finds metaphor in the materials and techniques she uses—textile design, weaving, papermaking, drawing, and collage—fluently transforming ideas into images.

Hastings once aspired to make a living as a socially conscious mural painter, but the Bauhaus aesthetic in American architecture after World War II all but eliminated the need for decorative interiors. So he made a career out of designing utilitarian complements to modern architecture. All the while he has made sculpture and written poetry and prose for his own pleasure.

Jack’s engineering genius and whimsical imagination are on display in the spritely aluminum Dancing on Air mobiles at the Nashville International Airport. Arlyn’s brilliant woven coverings for eleven stories of Elevator Walls at Vanderbilt University Medical Center have lifted the spirits of many. Their work introduced innovative techniques and motifs: carved concrete fireplaces and planters paired with colorful, highly textural rugs and wall hangings. Alice Zimmerman, longtime trustee of the American Crafts Council and partner with Nancy Saturn in the avant-garde Zimmerman-Saturn Gallery on Second Avenue, praises their professional approach, starting with a small-scale maquette for every piece: “Arlyn is a consummate artist, terrifically well-read, erudite, and charming.”

Hastings and Ende have long lived on the edge. As back-to-the-land farmers, they raised goats and practiced sustainable living, including “loca-vore” food consumption and a “grass” toilet, long before current trends. Not only did they push the envelope to gain support for large-scale public art, they also worked in community, gathering friends and admirers in Murfreesboro, Bradyville, Woodbury, and Sewanee.

Prior to their upcoming exhibition at Tinney Contemporary, the only time Ende and Hastings have exhibited together was in 2004, at Saint Andrews-Sewanee Gallery. “When all is said and done, their careers and lifestyle exemplify what it is like and what it takes to survive as artists,” aptly stated the gallery brochure.

Arlyn and Jack speak more eloquently than any writer could paraphrase. The following questions and answers are from interviews in late 2011 and recent conversations with their supporters and admirers.

Q: Tell me about your life journey together.

Jack: In 1958 Arlyn and I left New Orleans and went to New York via Italy. We moved to Boston, then to Block Island, and by 1968 we were in Tucson. I discovered a desert nursery south of Tucson run by this old guy who really knew his cacti. He collected them from all over the world and knew their names and Latin names. I bought the plants from him and designed the planters for the plants themselves. We took those into Manhattan where Georg Jensen [modern design store that introduced contemporary Scandinavian design] was on the corner of 53rd Street and Fifth Avenue.

Arlyn: We’re raking the sand and getting it all set up and we open the curtain and people are four and five deep, and it sold out in no time.  New Yorkers just hadn’t seen anything like this; it was something very new. We called it “living sculpture.”

Q. You came to Tennessee soon after, did you somehow sense that the timing might be right?

Jack: Nashville was just on the edge of breaking out of the past. The Centennial Park Fair had been for the first time the year before. We had never heard of craft fairs. I had a little problem with that you know, coming down from being a sculptor. But if you are going to live in the country you have got to do what you can to survive. We didn’t do well with sales, but we usually got orders for some larger things like fountains. Ben Caldwell [Nashville art collector Dr. Benjamin H. Caldwell] was a big supporter at the time.

Arlyn:  We did the second TACA fair and continued on for sixteen years. Clara’s article [Clara Hieronymus, longtime art writer for The Tennessean] gave us exposure. We met lots of people through the fairs. People were fascinated by these people living outside the city the way we were.

Jack: Duncan Callicott [Director of the Botanical Gardens at Cheekwood] liked my work, and he gave me a show of my garden stuff at Cheekwood in the new Botanic Hall. And that is how we met Neil Bass [Architect, Botanic Hall] and Arlyn got her first break.

Duncan Callicott remembers: “There were two connections between Jack’s work and Neil Bass’s Botanic Hall. The curved walls of the building were concrete that had been poured in place, just as Jack’s planters had been cast in molds and then carved. And both were intended to be organic, so they fit into the landscape.” With exhibition designer Randall Lantz, he created an environment complete with waterfalls, luxuriant orchids, and unusual cacti in a microclimate similar to Arizona. Neil Bass recalls, “It worked perfectly to illustrate the whole idea of the building. You could walk down on either side of the central atrium then turn around 180 degrees and see it through the big picture window.” This would become the basis for EnviroGarden, sculpted concrete with native grasses, a Tennessee Arts Commission Welcome Center commission installed just in time for the 1982 Knoxville World’s Fair.

Jack: Cement was my favorite medium. I never exhausted its potential. Easily available, cheap, requiring a minimum of tools and equipment and easily adaptable to large-scale projects, it was almost the ideal medium.

Q:  Your creative partnership has included art, farming, music, writing, and designing and constructing a contemporary house and studio.

Arlyn: You talk about working together; we worked together on that. Neil Bass gave us the windows from an old warehouse on Second Avenue, so we made openings to fit them. I did the electrical, and Jack did all plumbing. The building inspector said it was prettiest job he had ever seen.

Jack: I did everything the hard way—all but the Sheetrock and the finished floor. Arlyn’s studio had two big windows, an upper row of clerestory windows, and hardwood floors. Arlyn designed a big [thirteen-foot-wide] loom and made quite a few commissions on it.

In 2000 Hastings published The Illuminated History of Darkness, a book of essays and poems handsomely designed by Ende. Soon thereafter, they built another combined home/studio in the woods near Sewanee, where Arlyn worked for seven years as university gallery director.

Arlyn and Jack have done what many aspire to: living their values without compromise and successfully supporting their art practice. At Tinney Contemporary, Arlyn’s artistic and literary sensibilities will be on display with fabric collages that read like an abstract book. Jack has returned to the classic modern imagery that first excited him as an artist.

The centerpiece of the exhibition is a colorful bronze sculpture entitled Existential Kiss, a timeless image of an enigmatic woman. Memphis art patron Doug Ferris, recalling that painted bronzes were done in ancient Rome, sponsored the lost-wax casting this summer. “The day we brought it back from the W. Binnings Foundry in Louisiana,” says Ferris, “Jack’s excitement was like that of a little boy.” Seeing the piece transformed from plaster to bronze was the fulfillment of a dream. Jack feels it is the strongest work he has ever done.

The exhibit, The Essence Of Our Ticking: Jack Hastings & Arlyn Ende, opens October 6 through November 10 at Tinney Contemporary. Enjoy a conversation with the artists on Collectors Art Night October 5, 6 p.m. An opening reception for the exhibit will be held on October 6, 6 to 9 p.m. 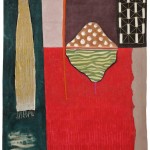 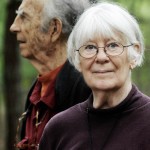 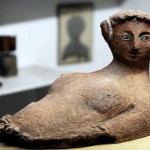 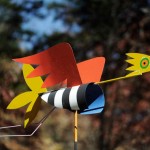 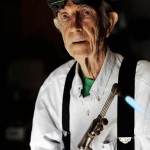 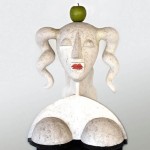 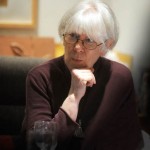 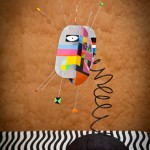 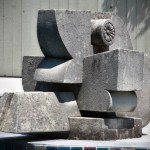 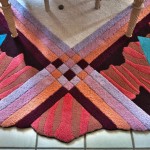 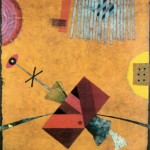 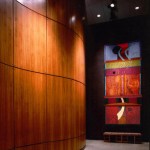 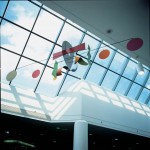