Born in Port Elizabeth, South Africa, this bright-blue-eyed traveler landed in Clearwater, Florida, in 1994 with an open mind. Five hours later, lugging suitcases through the hotel lobby, she stumbled upon the man she would one day marry. After four weeks, the young lovers turned onto I-95 and drove north, to Nashville, never looking back.
“I barely knew the guy. I didn’t think I would end up staying in Nashville. In fact, when I arrived here, I found it very strange. I was used to lively Johannesburg. Everyone in Nashville is in bed by nine,” Morshead laughs.  Once she found her niche here, however, her impulsiveness, infectious sense of humor, and raw talent landed her a prominent role in the Nashville arts community.
Morshead began as a teacher, both in Montessori settings and at Michelangelo’s Masters School of Fine Art, a Renaissance-style drawing and painting school she founded in 1996.  Inspired by her college drawing professor, who jokingly said, “Try to make drawings ugly,” Morshead taught her students how to combine formal stylistic technique with an avant-garde spirit. “Art teachers need to protect a student’s creativity. We must teach technique but never smother imagination. When a student would tell me that they cannot draw a straight line, I would say great!”
In addition to style, Morshead focused on material, encouraging students to stretch their own canvases and blend paints from earth pigments. “I combine traditional methods with modern technique in educational settings and my own work,” says Morshead. After having her second child, in 2002, Morshead hung up her teacher hat and set out to expand her personal repertoire.
From watercolors and acrylics to mixed-media vignettes, Morshead’s works are numerous and wide-ranging. During her prolific career, she is best known for her Eastern feng shui art, a series of paintings and block prints that have been distributed worldwide to be displayed in businesses, homes, doctors’ offices, and places of healing. Using acrylic on rice paper, Morshead adheres to the teachings of feng shui—how the flow of energy affects health, emotions, finances, relationships, and success. From red and black fish, which are said to clear negative energy, to pink peonies, which encourage fertility, Morshead paints imagery that creates harmony while increasing productivity, happiness, and a sense of calm. “My pieces have a healing quality intended to uplift the energy in the space and of all who enter it,” says Morshead.
Morshead’s current series of sculptural paintings blends her connection to wind and water with the sights and sounds of Music City. “Maybe Nashville has begun to sink in,” says Morshead as she shows off her electric violin piece. In this work, Morshead paints whimsical designs of the natural world on string instruments including guitars, banjos, and electric violins. She is still in the early stages of this series and vows not to rush her work, saying, “The concepts and instruments come when they come. I won’t force it.”
Robyn Morshead is represented locally by the Harpeth Art Center and Gallery, Mud Puddle Pottery Studio.  www.robynmorshead.com.

Click here to read the article in our full online magazine. 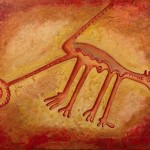 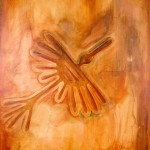