Kicking Down the Kitchen Door 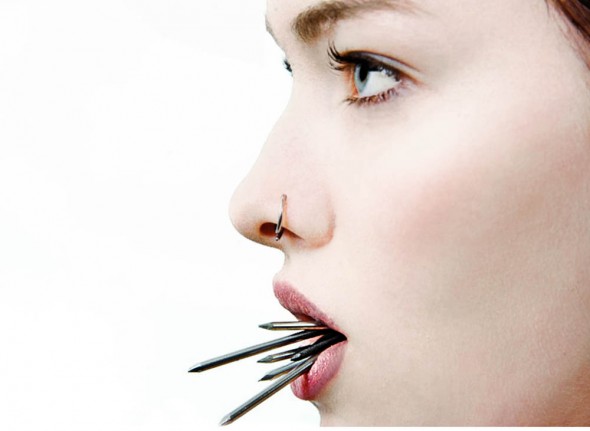 The profile of a young woman whose porcelain skin is pierced by a pencil-thin ring holds sharpened nails between her lips like missiles ready for firing. This fierce image is part of commercial and fine art photographer Hunter Armistead’s Undomestication of Women conceptual portrait series which encourages women to “kick down the kitchen door.”

Armistead, whose photographs are printed in publications from The New York Times to The

Huffington Post, collaborates with local women, and together they address the question, “How do we express female empowerment in the face of expiring maxims like ‘a woman’s place is in the kitchen’?” The result is a clever series where image, title, and prop weave a social commentary that incorporates humor with a fresh look at femininity.

Armistead describes the series saying, “Even though women are

becoming more equal in the Animal Farm sense of the phrase, there are still vast social and economic inequalities between men and women. In this series I am working alongside women to stylistically blend symbols of domestication with elements of strength to capture the essence of ‘undomestication’.”

Armistead juxtaposes objects like brooms and irons, traditionally used in domestic settings to reinforce subjugating gender roles, into settings that scream “I am woman, hear me roar!” 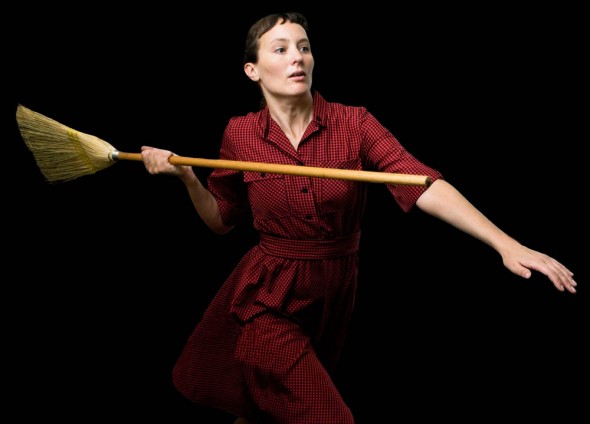 From a German housewife posed as a huntress with a broom as a spear to a woman with arms spread like an angel standing on her ironing board with irons for wings, the imagery is striking and the message clear—within the entire ideological superstructure that reinforces the fiction that the woman’s place is in the home, there is room for protest.

Title also plays an important role in the series. Pointing at the image titled Pumping Iron, Armistead jokes that every piece has “some combination of irony.” In this particular piece, which is a collaboration with musician and model Jennifer Morrison, the title Pumping Iron is a play on the classic bodybuilding movie starring Arnold Schwarzenegger. The piece itself is a takeoff on Winged Victory, which is the classic 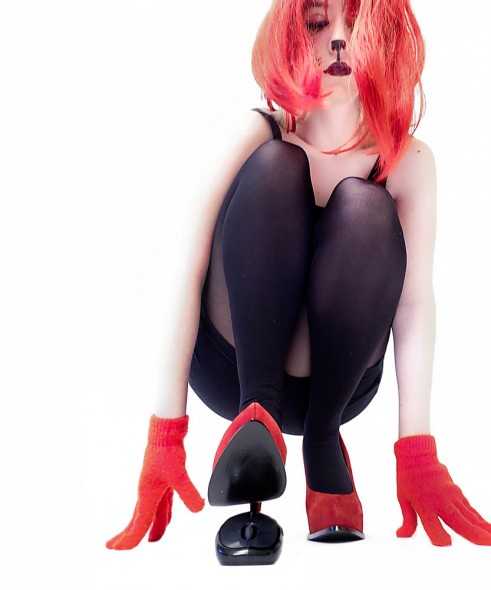 representation of femininity and strength housed in the permanent collection at the Louvre. Armistead is successful in blending lighthearted humor with a thoughtful focus to round out the series.

Armistead to connect concept with finished product. She describes the importance of the term undomestication, defining it as “the courageous act of breaking free from the emotional and/or physical bonds from individuals
and/or society . . . the ability to demand respect, think for myself, protect myself, and express all of the beauty, love, and strength in my heart as I see fit.”

What do you think about Armistead’s photography series?  Do you find it liberating?