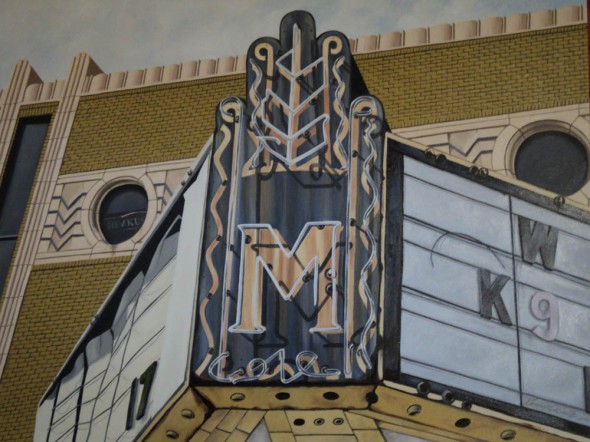 Iconic American signage lives on in the recent work of Ken Walls, whose paintings preserve the rapidly disappearing landscape of roadside signage and neon marquees that reached their peak during the ’50s and ’60s and helped define the Route 66 aesthetic that has a permanent place in the collective consciousness of American pop culture. Walls’ own interest in this imagery was sparked during childhood family vacations through the heartland and was rekindled during a post-Katrina trip to New Orleans. While there he realized that many of these pop treasures were “in danger of disappearing forever, not only from New Orleans but from other cities and towns and from memory as well. So I felt compelled to commit them to canvas. I guess you could say I’m part historian and part preservationist.” 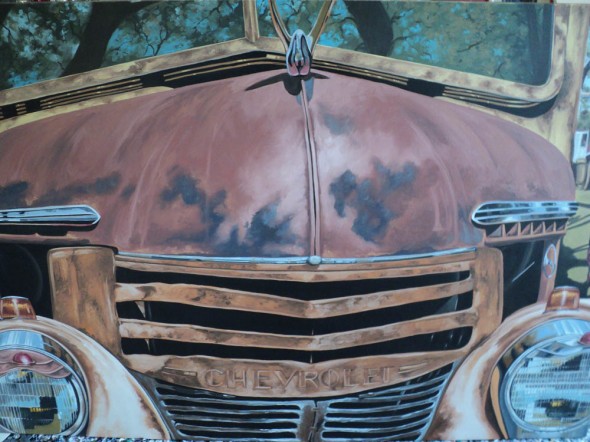 The retro images in Walls’ work resonate on many levels, and the artist soon realized that his paintings needed little interpretation but “were speaking for themselves through the shared memories of those who viewed them.”

Walls has found that his paintings “take on a life of their own, as viewers recount their experiences . . . turning images of vacant theaters, rusting marquees, and broken tubing” back into “vibrant, glowing spaces” in the “hearts and minds of those who have spent time in these grand places.”

Walls’ painting of the Joy Theater in New Orleans is an image that holds particularly rich memories for many, resulting in a fertile dialogue between the artist and his audience. “One woman told how her mother worked at the Joy during her youth and how she would spend weekend matinees in the cool of the air-conditioned interior with unlimited Coke and popcorn. Another gentleman, a member of a Nashville-based band, identified the Joy in my painting and told how he participated in a photo shoot in the Joy’s darkened interior.” Through conversations such as these Walls’ paintings are resulting in what could be described as an impromptu oral history of these vanishing landmarks. 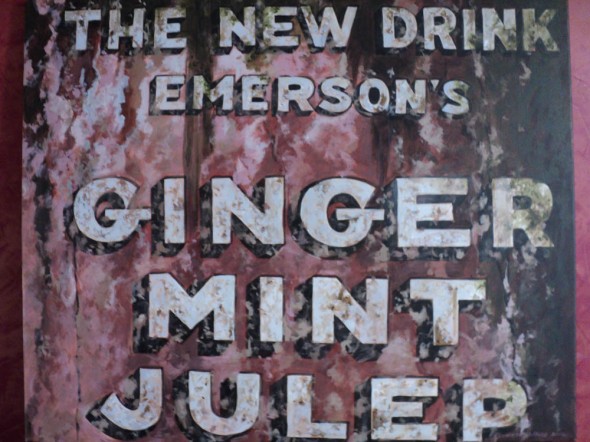 Edward Hopper and his depictions of the growing isolation of Americans during the first half of the twentieth century is one of Walls’ major influences. The subjects and techniques of photorealist painters such as John Baeder, Robert Bechtle, and Richard Estes are also readily apparent. Walls also admires Nashville-based artist John Jackson for his “realist approach to communication” and Randy Purcell “for his approach to memory.”

emotions in his work. The street-level view of signs that Walls employs plays a key role in making his paintings so instantaneously recognizable to viewers. “I approach subjects just as other people would see them in a daily encounter, street level, looking up . . . just as they have always been viewed,” says the artist. 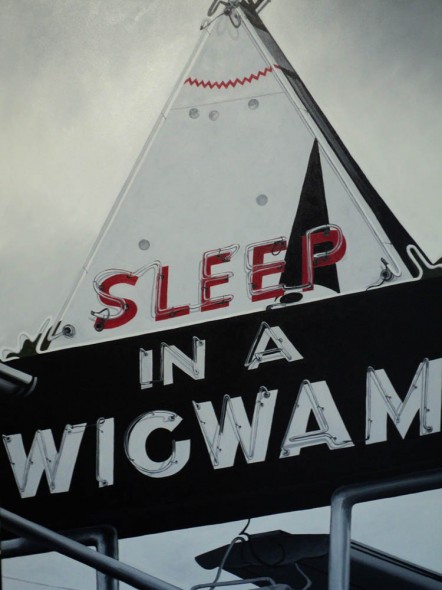 In Walls’ aesthetic, thematic subjects take precedence over formal concerns. “I paint what I feel compelled to paint,” says Walls. Through this intuitive approach, he has realized just how critical the idea of “shared memory” is to his work. Through his depictions of neon and roadside signage Walls hopes to touch his audience in unpredictable and intangible ways, opening the door for viewers to bring their own personal experiences to his paintings.

Ken Walls is represented by Picture This Gallery. His work will be featured at Picture This in the Arcade during the Downtown First Saturday Art Crawl in February and October. Throughout the month of February his paintings will be on view at Picture This in Hermitage, 4674 Lebanon Pike.   www.picturethis-gallery.com    www.kenwallsart.com

Have you seen Ken Walls work in person?