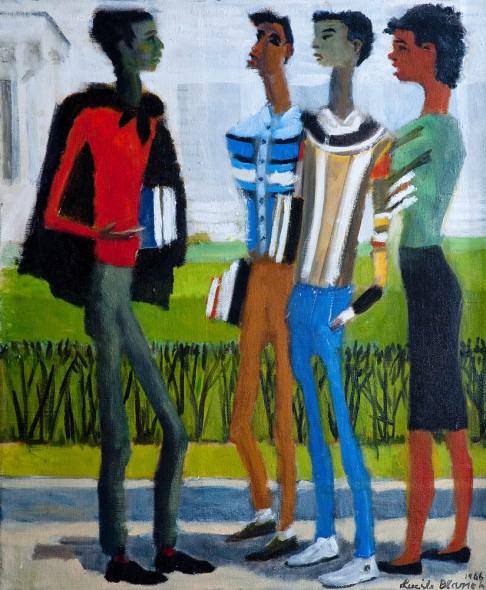 Lucile Lundquist Blanch was a woman of notable accomplishments. Born in Hawley, Minnesota, she studied painting and lithography at the Minneapolis Art Institute from 1916 to 1918. Her fellow Minnesota-born classmates at the time would go on to be the internationally known lithograph heavyweights Harry Gottlieb, Adolph Dehn, and Arnold Blanch, her husband for eleven years.
They all shared the good fortune of being young in the heyday of the Progressive Era, the 1900–1920 period that was the seedbed of new political and artistic ideas. Blanch and her classmates, in rapid succession after finishing their studies in Minnesota, headed for the Art Students League of New York. There Lucile studied under artists like Kenneth Hayes Miller and Frank DuMond.
In 1922, while in New York, she married Arnold Blanch. The Blanches then moved to Woodstock, New York, where they played a key part in the revitalization of the Woodstock Art Colony. During their early years the Blanches supported themselves by weaving and selling tapestries and running a small cafeteria. All the while their reputations as painters and lithographers grew in the world of art.
Lucile’s time came in 1933 when she received a Guggenheim Fellowship for “creative work in painting and lithography.” From that point forward her art was collected by and shown in a number of important institutions and galleries. She exhibited at the early Whitney Studio Club and later at the Whitney Museum of American Art, Museum of Modern Art, New York Society of Women Artists, and various art galleries. In addition to the Whitney, the Metropolitan Museum of Art and Museum of Modern Art in New York City collected her work, as did the Corcoran Gallery in Washington, DC.
After her divorce from Arnold Blanch in 1933, Lucile continued to paint while traveling and teaching throughout the United States and Mexico. Her teaching career spanned four decades beginning in the late ’30s at the Ringling School of Art, Sarasota, Florida, in the ’60s at Mercer University, and in the ’70s at Wesleyan College, Macon, Georgia. All the time she maintained her connection to Woodstock, New York. When she died in 1981 she was buried in the Artists Cemetery there. This painting was acquired from the brother of the owner, an artist himself who dabbled in buying and selling art that he liked. The purchase price was not significant, “maybe $400.” Here is a case of two siblings each having a “good eye.”

Thirty-six works by Lucile Blanch have been recorded as being offered at auction since 1997. Of those thirty-six, seventy-seven percent have sold. The achieved prices have ranged from $400 to $19,000. It is my opinion, based on achieved prices for similar figurative works from the same time period, that a conservative auction estimate for this painting would be $3,000 to $4,000.