Wrote Thelma & Louise, Created the Nashville TV Show, Appeared on the Cover of TIME, and Picked Up an Oscar Along the Way . . . Not Too Shabby! 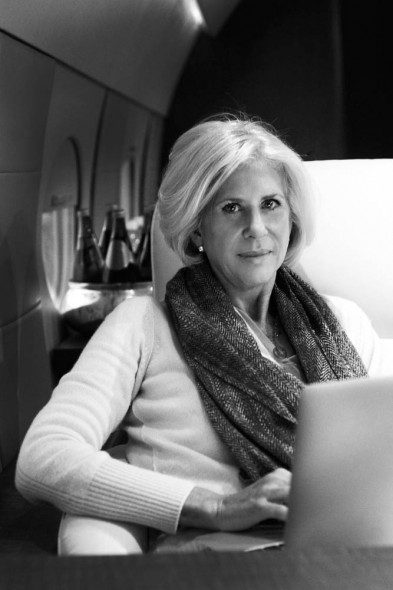 “The whole time I lived here,” says Oscar-winner Callie Khouri with a degree of wonder, “all I could think was why am I here, what am I doing here? I’d think this makes no sense; there’s nothing here for me…’”

Pausing in the cheap-veneer Winnebago with the Styrofoam-beige shag carpeting, expensive console-mounted sound system, and the mirror ringed in large lights for applying make-up, she takes it all in. “Now I know why—I was doing research! I was around all these talented people, and none of my talents fit with anything they did. So, here I was . . . They [every aspect of her Nashville life] all seemed to be dead ends. And then, it all dumps into this.”

“This” would be Nashville, ABC’s expensive prime-time weekly soap/drama that centers around several crossroads, not just in the country music industry but the dynamics of local power and politics, the bubbling under other musical genres, ageism, addiction, and, yes—because it’s network—sex.

Laughing, she shakes her head. The Texas-born, Kentucky-raised Khouri has always defied conventional wisdom. Having studied at the Lee Strasberg Theatre and Film Institute, she wrote her first script while working as an assistant at a video production company. That little script became Thelma & Louise, which captured the imagination of director Ridley Scott before landing the statuesque blonde on the cover of TIME and ultimately winning her 1992’s Oscar for Best Original Screenplay.

The tale of a fed-up waitress and her timid best friend trapped in a suffocatingly dreary small-town marriage going on the lam for a weekend adventure was anything but conventional at the time. But it struck a resonant chord with America. This wasn’t a feminist manifesto; it was feminism lived, as well as a hero’s journey shared by two friends, who just happened to share the double XX genetic coil. Nashville, seemingly a classic lots-of-money-and-betrayal proposition, follows suit. Using the genuine conflicts, cold-blooded powerbrokers, and actual realities of the entertainment business, Khouri committed to exhuming the humanity beneath the decimal places and high-gloss hair toss needed for prime time.

Tours not selling, young artists who’re fluff that flex sex over talent, business folks who look at the bottom line and miss the content, as well as backstories driven by poor choices . . . all drive Nashville. And the music—overseen by iconic producer/artist/visionary T Bone Burnett—strives to raise the bar on what mainstream country can stomach.

“When my agent started talking to me about this, I kept saying no one is going to buy the kind of show about Nashville I’d want to make,” Khouri remembers. “But they kept insisting we take the meetings . . . ”

Steve Buchanan, president of the Grand Ole Opry, had a vision. R.J. Cutler, known for cutting-edge documentaries including The War Room and September Issue, seemed to understand the heart and grit Khouri was seeking. A meeting with Lionsgate, “where I never thought they’d go for it,” turned into meetings with several suitors. Two networks seemed committed.

Still Khouri, who’d always found a way to examine the sexual politics and stereotypes beneath her quixotic story lines and brilliant dialogue (like “You should’ve thought of that before you married someone whose nickname in college was Hounddog,” Kyra Sedgwick’s sister in Something To Talk About chides the cuckolded Julia Roberts), didn’t want to be saddled with a long-term TV series obligation to churn trash-and-tabloid storylines.

Thankfully, ABC—with its commitment to the Country Music Association Awards and CMA Music Festival special, plus Reba McEntire’s Malibu Country—recognized the intrigue beneath the glitter of Taylor Swift, Carrie Underwood, and Shania Twain. Though erratic airing has made developing a state of must-see Wednesday-night viewing elusive, Entertainment Weekly and People both cited Nashville as among the year’s best TV.

“I wanted to get it right,” she says. “Because no matter where I go, there is so much music here that exists only here! All the artists I love, you can’t hear on the radio. Well, maybe Elvis Costello from time to time. But that’s a part of what makes Nashville Nashville—and it creates this dynamic, too.”

Which is why, beyond building an exact-replica Bluebird Café on a soundstage in East Nashville, Khouri plucks venues like the 5 Spot and Two Old Hippies to host smaller artists and shows, sets scenes in the writers rooms at publishing companies, and takes on the cinderblock anonymity of what people don’t see backstage at the big arena shows.

Khouri understands the lives of the struggling and superstar musician, because she’s been there with her friends. Reputedly the Thelma in Thelma & Louise, Pam Tillis met Khouri when she was showcasing as a rock act at the Exit/In long before country stardom, and the singer/songwriter was struck by how worldly “the waitress” bringing her a Coke was.

“She read books and saw films and had thoughts,” Tillis remembers. “I was starved to have someone like that in my life. When we’d finish running around, doing the things kids do at that age, we’d sit up and talk and talk all night. It was amazing.”

Tillis, who would go on to win the CMA Female Vocalist of the Year, had a parallel rise, where the waiting was, most definitely, the hardest part. Visiting her friend in L.A. while working on a pre-stardom album, Khouri asked her to read some of what she’d been working on.

“I’m no literary person,” Tillis acknowledges, “but I was floored. The dialogue she was writing . . . it was awesome. And then, well, I’m having a couple of #1s, and she’s on the cover of TIME, so I couldn’t compare, but I’d seen where she started.”

Callie Khouri is a long way from the Exit/In and her impossible dreams. These days, she shuttles from Nashville to L.A., midwifing her series and keeping her eyes on the details—getting the story right, making sure great music is cast, being true to her characters.

Once upon a time, she’d have a year to deliver a script, but now she often has two weeks to turn around an episode, while developing a story line that unfolds over multiple weeks. “It used to be solitary,” she explains. “But now I have a roomful of writers whom I can talk things out with. There’s always somebody who has an idea of what to do.”

Not that Khouri doesn’t see where she’s headed.

In a tangle not unlike real life, Nashville offers the reality under the reality people think they know. “I’ve had a lot of people who have careers tell me, ‘That’s just how it is!’ I can’t think of a better compliment.”
For more information about Callie Khouri visit www.imdb.to/14HHCkv.