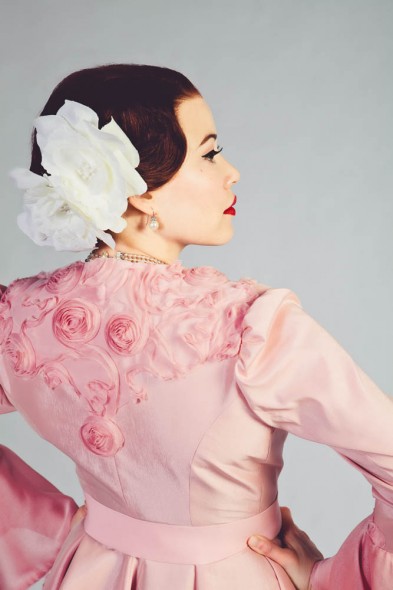 Going from guttersnipe to grand lady is achievable through crisp elocution and enchanting gowns, as anyone familiar with My Fair Lady knows. Quite possibly none other than Cecil Beaton, who created the costumes for the 1963 film starring Audrey Hepburn, could have better transformed Eliza Doolittle in such fitting fashion. Beaton himself was a social climber who intimately understood the milieu into which Doolittle, a cockney flower peddler, was thrust.
And when Studio Tenn Theatre Company brings My Fair Lady, directed by Matt Logan and co-directed by Kim Bretton, to the stage May 16 through June 2 at the Franklin Theatre, the clothes will once again make the lady. Actress Laura Matula, as Doolittle, will wear a collection of gowns that aid her in the social rise that Professor Henry Higgins orchestrates.
Logan, Studio Tenn’s Artistic Director, has taken up the task of conceptualizing the stage versions of Beaton’s extravagant confections. He is also in the process of hand stitching the gowns, in the couture tradition, to ensure that their lace and ruffles speak volumes. 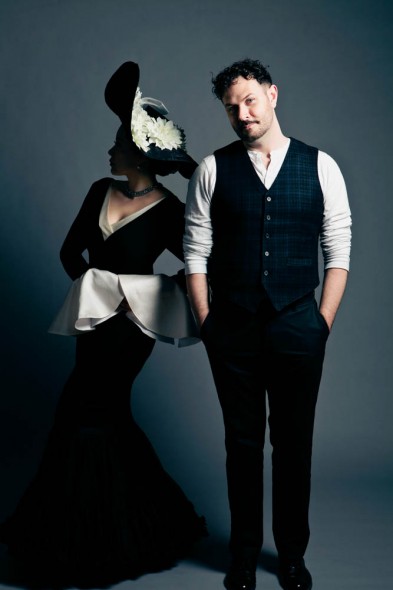 “Design-wise it’s a heyday,” Logan says as he sits on the front porch of a Nashville coffee shop. “It’s just an extravagant heyday. What is beautiful is that the costumes are art. They’re moving art.”
Logan’s eyes are as blue as the waters of Bora Bora, and his wavy black hair is tousled, as it will be when he also takes on the role of Higgins. He envisions a different kind of professor, younger and more in the mold of Sherlock Holmes than the persnickety Higgins of past stage and film versions.
Due to a casual—some might say insensitive—wager he makes, Higgins, an expert in phonetics, conducts a social experiment in which he 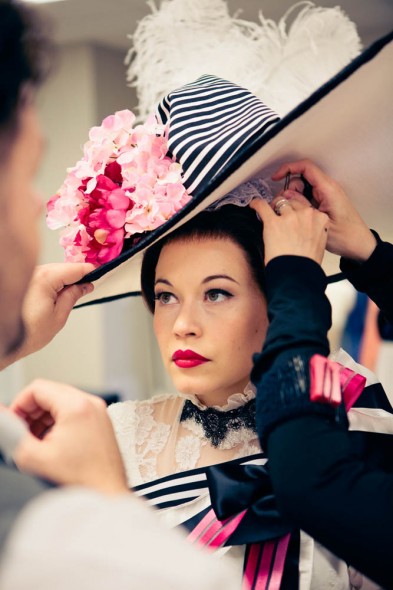 transforms Doolittle into a gentlewoman fit for a society ball. “All too often, he’s too dapper,” Logan says of the typical treatment of Higgins on stage and screen. “And he’s a rebel to society. He’s that rich kid who doesn’t care. So we’re going to play with my hair being wild and curly, and I’ll wear an overcoat and scarf.”
But for Doolittle, Logan will stay truer to type. The whippet-thin Hepburn was a vision in Beaton’s fanciful costumes, as the star of Studio Tenn’s version will be in those stitched by Logan. The costumes will simply be tweaked for the stage and body type.
“Beaton’s costumes, the color palettes he used, the ideas . . . I’m going to be embracing all that,” Logan says. “I’m just not copying them perfectly.”
Logan worked in costume design on Broadway in New York for five years. Like Beaton, who was a photographer, set designer, diarist, and costumer, Logan wears many hats. He is an illustrator, director, actor, and, in addition to costume work, he has sewn clothes for Nashville designer Jeff Garner of Prophetik.
For My Fair Lady, Logan has created five gorgeous costumes that transport Doolittle from the grubby environs of Covent Garden to the haunts of those to the manor born. He was assisted by milliner Anna Zeitlin, who studied in London, along with wig designer Sondra Nottingham and wardrobe supervisor Terrah Trimble.
The iconic gown for the Ascot Racecourse, with its over-the-top hat, is likely the most memorable of the gowns Hepburn wore in the film. 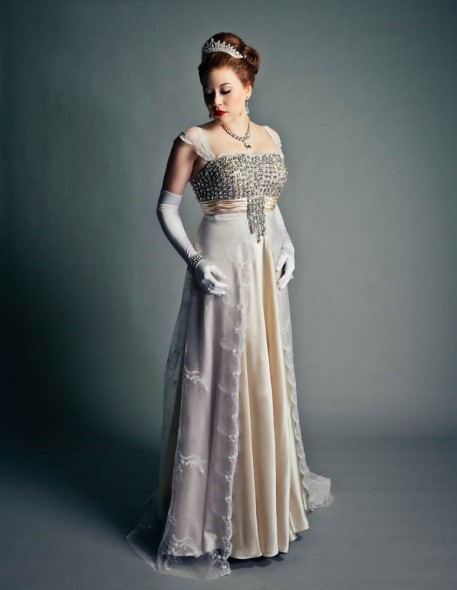 Logan has stayed true to most of its elements, including that black-and-white bow at the shoulder, which he has accented with a delicious hot-pink ribbon. The hat is a sweeping arc of pink, black, and white (topped by a massive white feather, naturally).

For the Embassy Ball, the white gown Beaton designed had an empire silhouette, was beaded throughout, and was worn with long, white gloves. Logan tweaked his version by keeping the bulk of the bling on the bodice while retaining those delicate lace cap sleeves.
The final costume seen in the Doolittle wardrobe is an ultra-feminine pink ensemble covered in ruffles. While Beaton accented his costume’s jacket with a huge rosette on the front, Logan scatters smaller rosettes across the front and back. “It’s my favorite,” he says. “It’s Galliano-meets-Chanel inspired.”

Logan refers to the notion that Higgins, along with his fellow linguist Colonel Pickering, conspires to improve Doolittle’s social standing on a lark. “They are insensitively creating a woman as a challenge, and it’s brutal,” he says. “There’s no emotion. They’re completely creating a person from scratch and disregarding the human that was there to begin with. So at its core it’s a Frankenstein story that becomes a love story.” 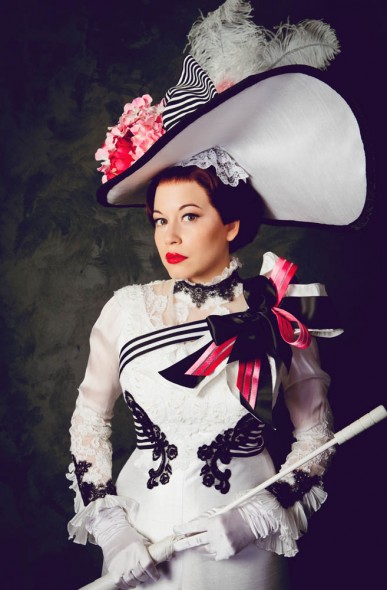 Some might argue that Beaton’s confections were simply a camp way of tweaking society’s nose. But with their overabundance of froth and lace and their waspish waists, they were silent witnesses to the Edwardian era, a time when women, while on the cusp of independence, were still bound into strict society roles.
“When Eliza was selling flowers, she was as free as could be,” Logan says. “She could work, she could make money, even though it was the tiniest amount imaginable. If she did great, people applauded. If she didn’t, people looked the other way.”
But, he notes, as she goes through the process of becoming a “lady,” her body is stiffened with seams that sculpt her into an hourglass and corsets that restrain movement. “She says in the script, ‘What am I fit for? What have you left me fit for?’”
When it comes to being fit, My Fair Lady is tailored beautifully for the stage in Logan’s deft hands, as theatergoers will gleefully discover.
My Fair Lady runs May 16-June 12. Tickets are now on sale at Studio Tenn and the Franklin Theatre Box Office.

Enjoy this behind-the-scenes-video of the photography shoot for this article.