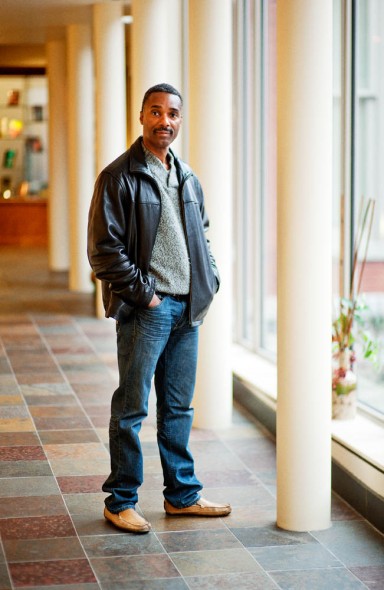 On October 1, 1983, 26-year-old St. Louis native Erskine Johnson was celebrating his mother’s birthday with about thirty relatives. What none of them could have imagined was that night, while they were honoring their matriarch, a murder committed 398 miles away in Memphis, Tennessee, would shatter their lives. Being the seventh of eleven children, Johnson was surrounded by siblings, cousins, and close relatives who lived in the area. It was the last time he would celebrate his favorite holiday–his mother’s birthday–with those he loved most. 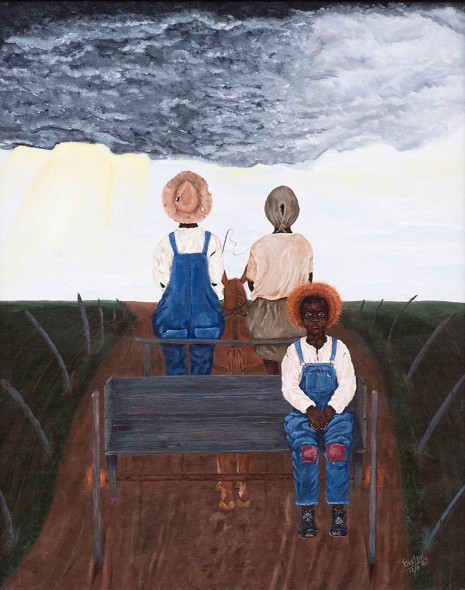 Braving the Storm, Oil on linen

Within several months following the murder, Johnson was tracked down, charged, convicted, and sentenced to death for the crime—even though he had never before set foot in the state of Tennessee. Stunned and disoriented, Johnson discovered from a Memphis attorney—who was initially retained to represent him—that after some initial inquiry it appeared that Memphis authorities were under pressure for a conviction and had their sights on Erskine Johnson as the murderer. It was a done deal. Unfortunately the attorney was reluctant about being embroiled in a political battle, and Johnson was forced to hire counsel from out of state.

The trial began December 1, 1985, and in spite of all the witnesses willing to testify that Johnson was in St. Louis during the murder, none of them were called to the stand. Six days later—after hearing only one witness claim to have seen Johnson—the all-white jury deliberated less than four hours and found him guilty of murder. In less than two hours the same jury imposed the death penalty.   For the next twenty-eight years Johnson (who changed his name in the late ’80s to Ndume Olatushani) lived in maximum-security prisons—and for twenty of those years was confined on death row inside a 6’ x 10’ cell. As if the gods’ insatiable thirst for suffering was not yet satisfied, in 1987 Ndume’s life crumbled even further after learning that his mother, the woman who knew of his innocence and never wavered in her faith that justice would prevail, was killed in a car accident along with an 8-year-old niece. “I was truly a broken man. I hit rock bottom,” says Ndume. And that’s when he started painting, a hobby that would ultimately change the course of his life.

Soft-spoken and with a calm demeanor, Ndume recalls: “After my mom’s death I decided I couldn’t be hurt anymore. I started drawing and eventually taught myself to paint.” While spending twenty-four hours in an enclosed space might drive some mad, Ndume says painting freed his mind and his spirit. “Through my artwork I lived outside of prison. I didn’t paint my surroundings. I painted people I would like to meet—mostly women and children. The people came to me.” 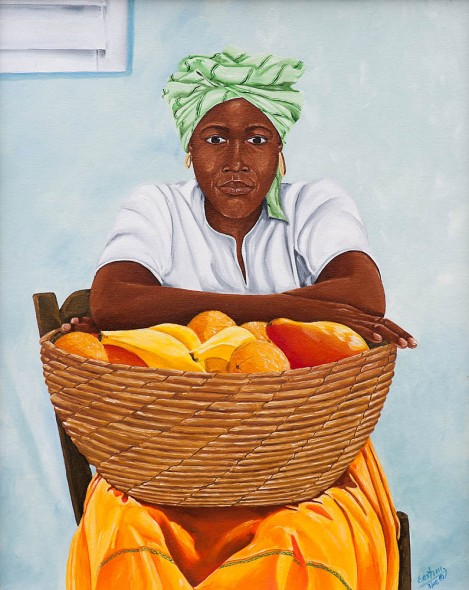 In 1991 Ndume started corresponding with a young college graduate named Anne Marie Moyes who was organizing a death row art show and who was mesmerized by his paintings. Through letters and visits they eventually fell in love, and through being familiar with the details of the case, Anne Marie discovered that reading law briefs came easily to her and enrolled in Vanderbilt Law School, where she would finish first in her class. “He was always upbeat. Imagine it. He was sitting on his bunk painting, propped up in a tiny room where he couldn’t stretch two arms out sideways,” says Anne Marie. Canvases needed to be small and no oils were allowed, and Ndume relied on whatever supplies were sent from the outside. After working diligently on Ndume’s behalf, Anne Marie convinced a New York law firm to work pro bono, and in 1998 Ndume’s death sentence was overturned. Due to the appeals process it would take another six years before he was actually moved from death row. 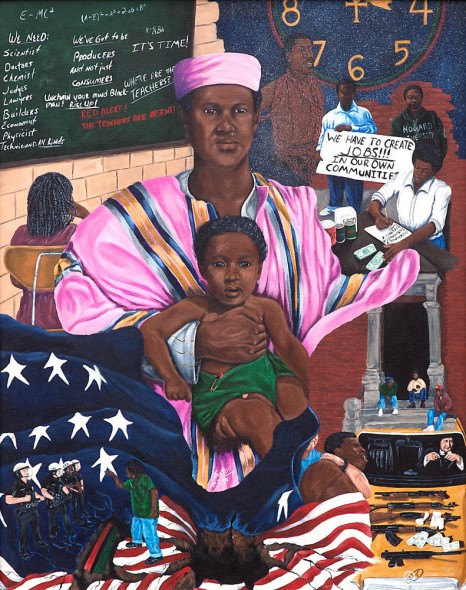 After twenty-eight years of imprisonment, Ndume is a free man living in Nashville with his wife, Anne Marie, and their adopted child. And while he was offered zero compensation for twenty-eight years of wrongful incarceration, Ndume assures me he is extremely grateful for a part-time job at the Children’s Defense Fund and to be painting.  When asked if he is bitter or angry about the stolen years, Ndume smiles and offers: “I let go of anger a long time ago. In letting go of anger, I freed myself.”

What is particularly poignant (and a common trait) in the faces of those who appear in Ndume’s work is gentleness—portraits of imaginary strangers kind enough to penetrate iron and steel to remind him of his true nature. 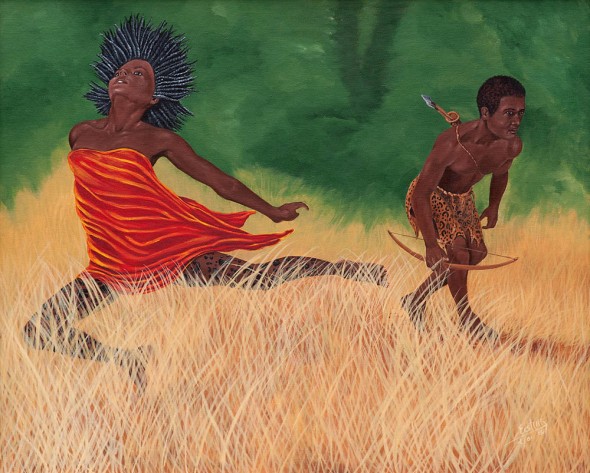 Tracking the Dream, Oil on linen

One of Ndume’s paintings, titled Tracking the Dream, depicts an African hunter and a spirit woman dancing in a field.

“He thinks he’s tracking a lion, but it turns out it’s his soul mate he’s been chasing the whole time. It’s the hunter becoming the hunted.” Glancing sideways, Ndume offers a knowing glance as if to make sure the irony is understood.
Molly Secours is a writer, filmmaker, and activist and is currently celebrating five years remission from cancer by gazing skyward and dancing on demand. www.mollysecours.com and www.lastinglegaciesvideo.com. The Arts Company will host an exhibition of Ndume’s work on May 16th from 5:30 to 7:00pm.  Editor Paul Polycarpou and Nashville Scene art editor, Laura Hudson will also speak with Ndume about his art and experiences.