“I finally stopped giving a shit,” Greta Gaines admits. “I figured this is my last full-length album, so I’m gonna architect it carefully, making it what I want. I kept all the tracks live: live vocals, Eric [Fritsch] played drums . . . and we built out from there, but it was exactly what I wanted, not what the momentum created.”
What the world-champion extreme snowboarder/fly fisherwoman wanted was an album that was—like everything about her world—immediate, evocative, and ultimately not what you’d expect. Lighthouse & the Impossible Love delivers: soundscapes set the stage for Gaines’ voice to drift, drop, and ignite as necessary on tracks where atmospherics dominate.

A tumbledown bass and a wash of buzz set her My Favorite Mistake-era, Sheryl Crow-evoking reflection on seeking a beacon title track in a searing juxtaposition of the feminine rising from the cacophony around her. If Whiskey Thoughts, her last album, was a swinging for the Americana/Adult Alternative bleachers project, Lighthouse is more intimate, more personal, and more . . . essential.

“This is me proving something to myself,” says the woman who’s hosted television shows for MTV, Oprah’s OWN Network, and ESPN-2. “Whiskey Thoughts was great, but I was trying to fit into other people’s definitions . . . This time, the songs came, and everything was incredibly fresh, and we’d track in the moment.
“It took five years, but I knew this was the last full-length CD I was going to make. I wanted everything, right down to the mix, to be exactly the way I heard it, exactly what the songs should have.

“And I figured if I did it right, I’d not need to make another one. I can make singles, put out tracks and compilations . . . but this would be the last full album.”
Lighthouse weighs the reality of a girl no longer young, a woman coming into her own and realizing that every choice requires letting go of something else. Not merely a quest to be happy where you are, it is honest and transparent about the conflicts and realms of the human psyche. 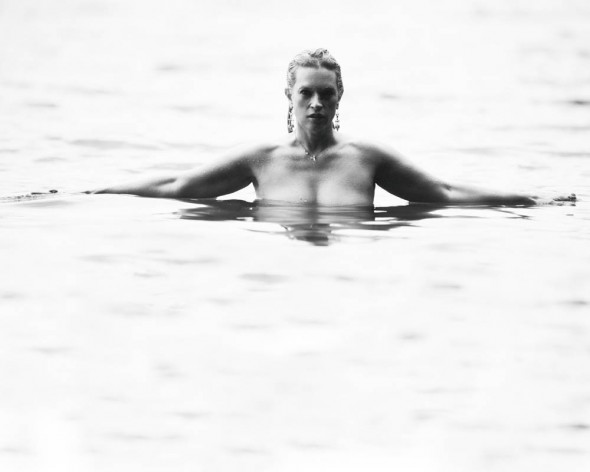 “(I’d Like to Get on Your) Good Side” is a flat sex song, about knowing how good that is even as everything is falling apart, while the Velvet Underground-wafting “Pining Away,” equal parts Aimee Mann and Nico, captures the erotic vortex of desire unrealized. Even “Door to Door” has a buoyancy to its seeking connection, Gaines’ sunniness defining the track.
“The lighthouse is a metaphor for ‘Where do you want to be in your life?’” explains the lithe blond. “You can see the kid side, the parent side . . . You’re in the middle but not in your 20s, so it’s up to you! There’s all the stuff you’re not going to get to do, and you know time is finite.

“I was 36 when I got married. I was late having my two kids. I’m an activist. So this—for me—is about creating a magical place where the muses hang out; it’s about a light house . . . And to that, I relaxed my singing style. I kept the ego out of it with the live tracks; it loosened me up.”

The woman who’s provided music for Ethan Hawke films, toured with Willie Nelson, and fly-fished around the globe pauses, looking for a real truth to tie her desire up with. “I just want to be original. Music’s been done by so many epic people. This town is overrun by so many egos and people who want to be artists. I spent a lot of years thinking I was better than I was. Now I think I’m not as good as I might be.”

Maybe it’s the correction of advanced awareness. Perhaps it’s the reality of more exposure to the poseurs around here. Either way, Greta Gaines knows the difference—and she’s letting her lighthouse shine.